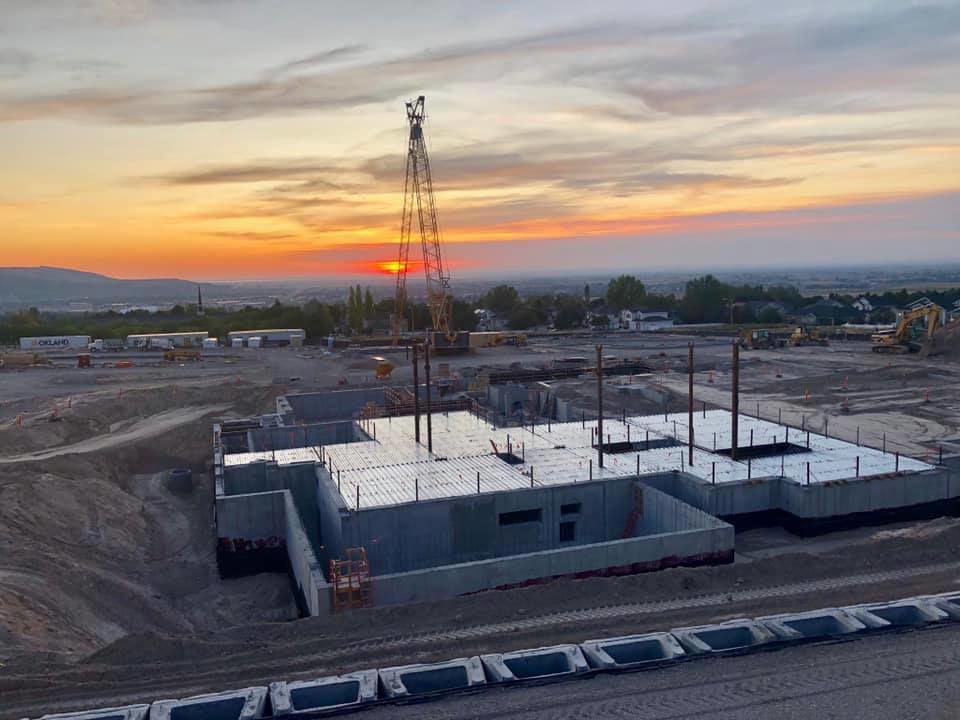 The construction of The Church of Jesus Christ of Latter-day Saints Pocatello Temple was the top local story of 2019 as chosen by the Idaho State Journal’s readers. For the top sports stories of 2019 check out the Sports section in today’s edition. 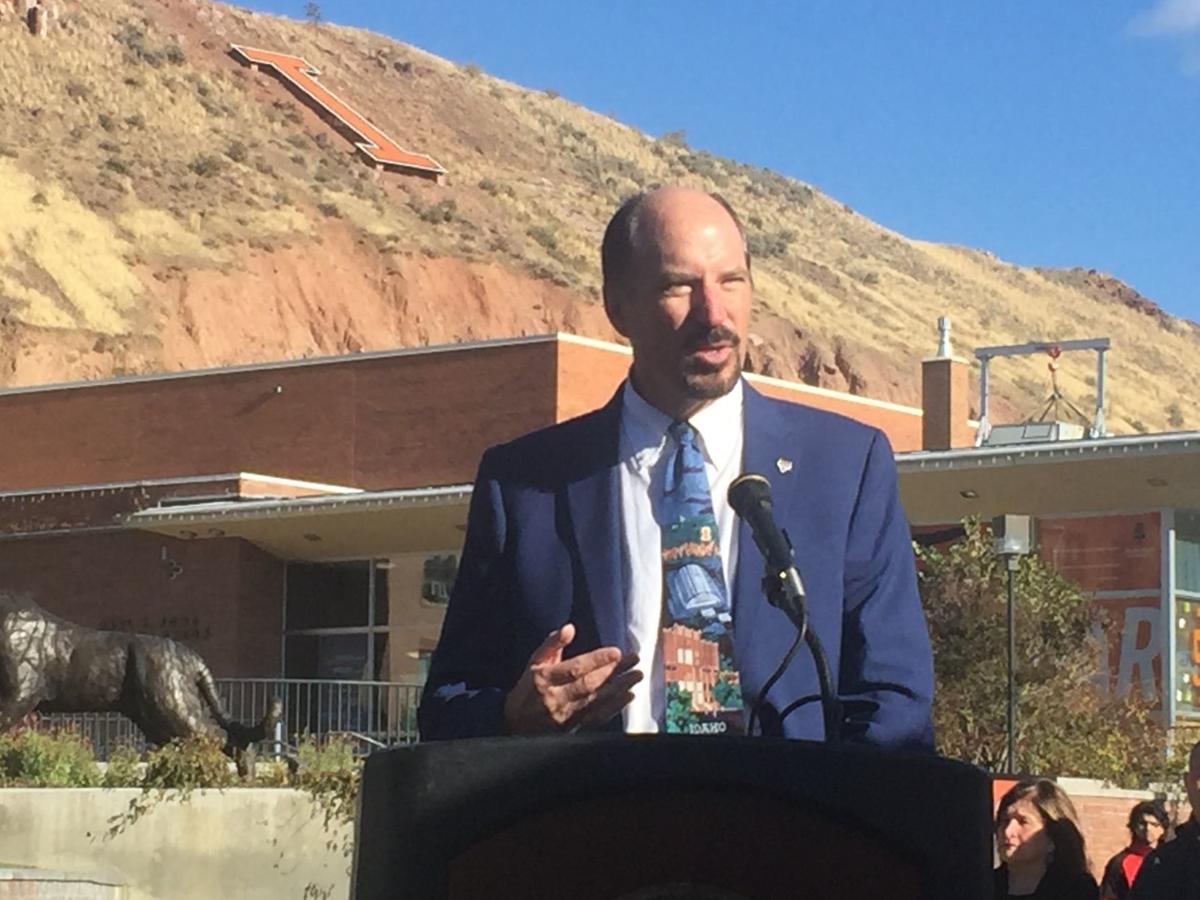 Steve Rice discusses the donation his family made to fund the return of the iconic letter “I” to Red Hill during a dedication ceremony at Idaho State University in Pocatello. The new “I” can be seen in the background. 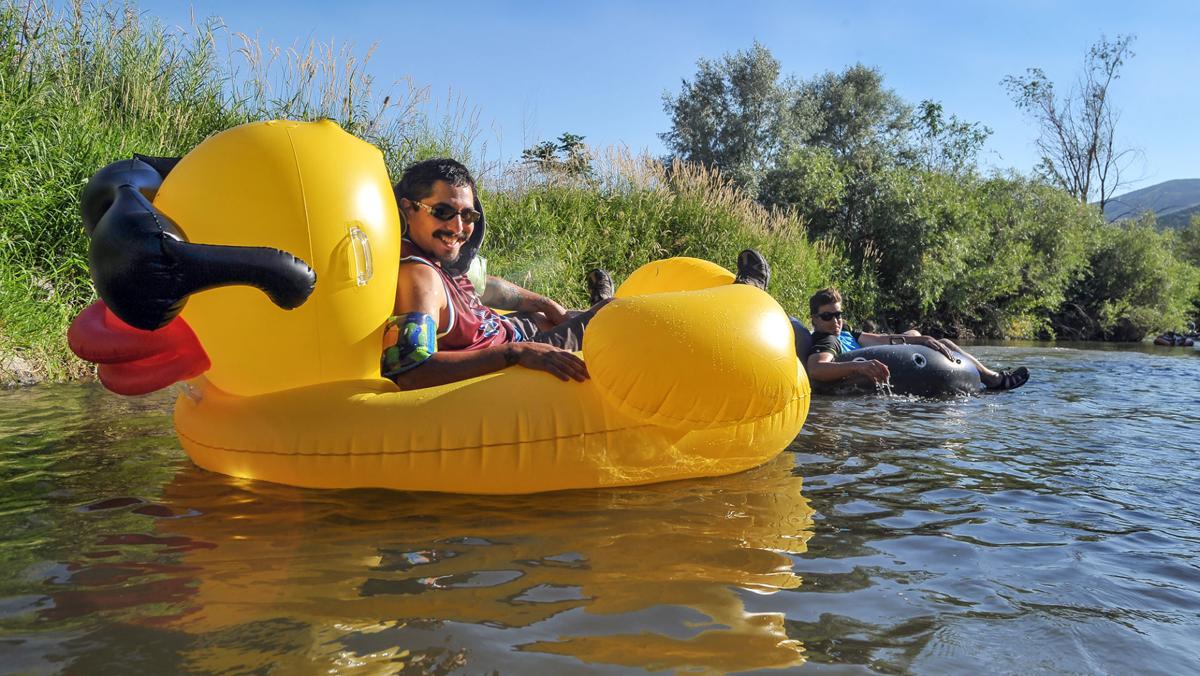 A man drifts serenely down the Portneuf River on his rubber ducky float during the first Poky Portneuf Paddle in Pocatello last year. 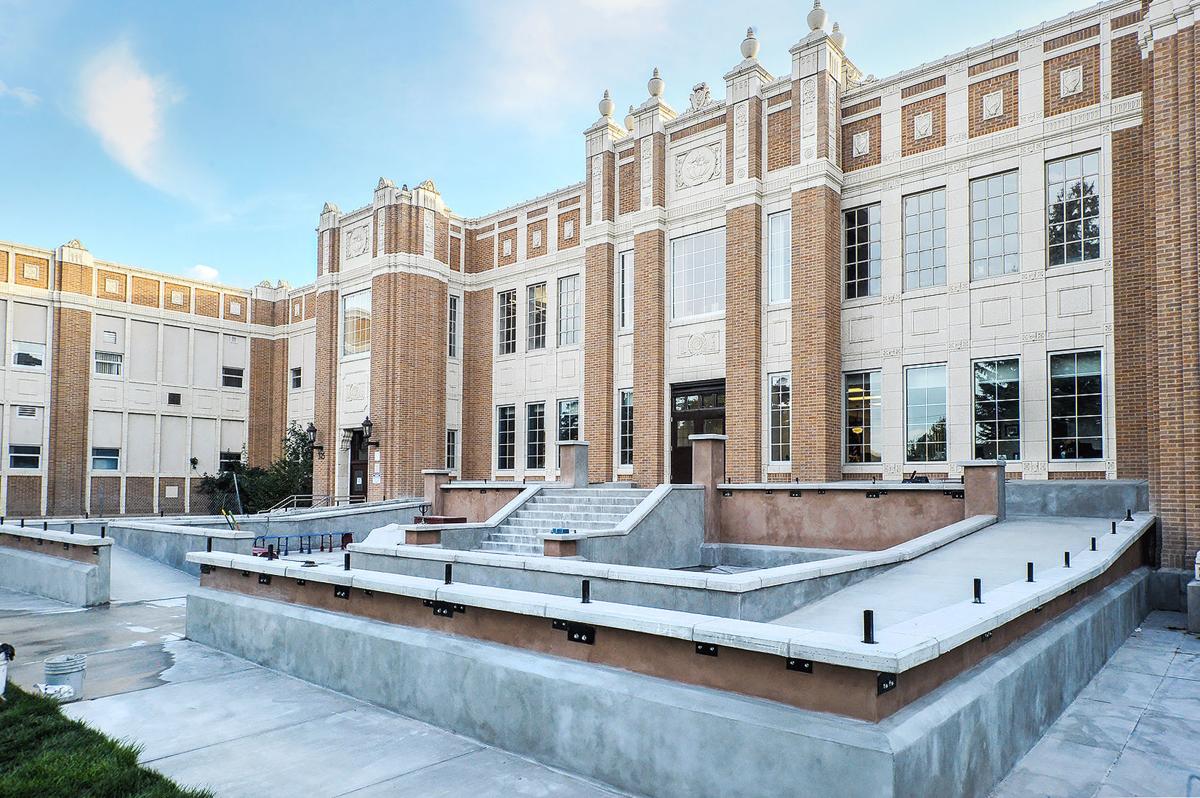 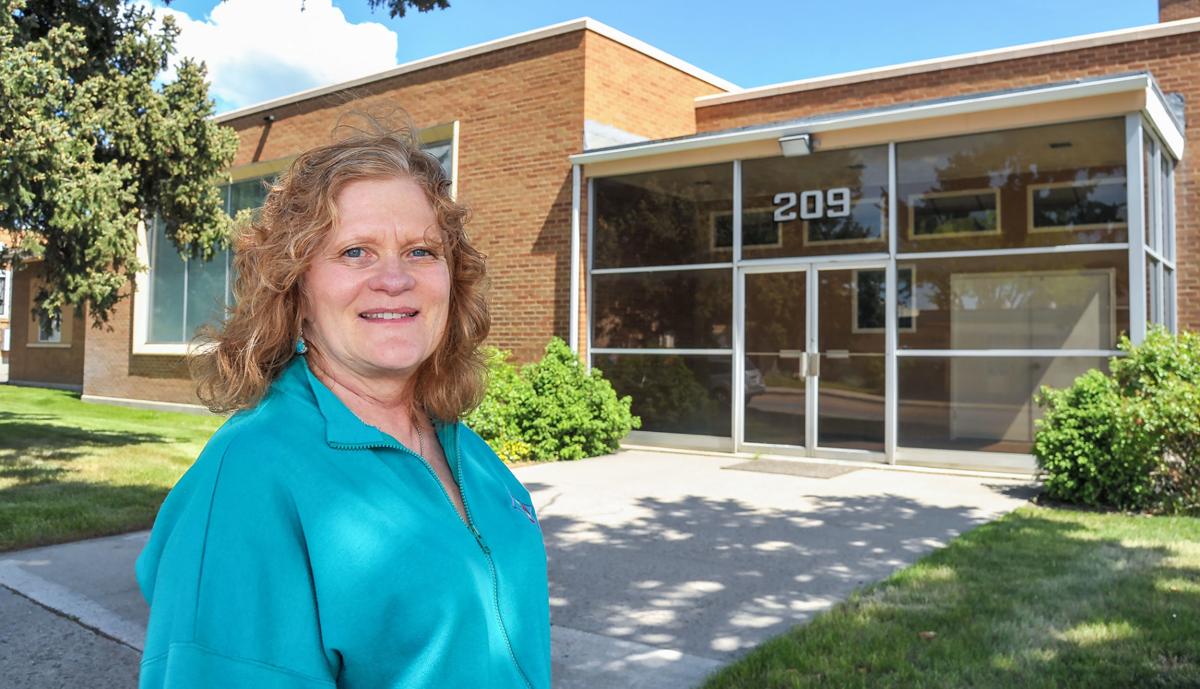 BJ Stensland, executive director of the Aid for Friends homeless shelter, stands in front of what will be the organization’s new location at 209 E. Center St. in Pocatello.

The construction of The Church of Jesus Christ of Latter-day Saints Pocatello Temple was the top local story of 2019 as chosen by the Idaho State Journal’s readers. For the top sports stories of 2019 check out the Sports section in today’s edition.

Steve Rice discusses the donation his family made to fund the return of the iconic letter “I” to Red Hill during a dedication ceremony at Idaho State University in Pocatello. The new “I” can be seen in the background.

A man drifts serenely down the Portneuf River on his rubber ducky float during the first Poky Portneuf Paddle in Pocatello last year.

BJ Stensland, executive director of the Aid for Friends homeless shelter, stands in front of what will be the organization’s new location at 209 E. Center St. in Pocatello.

Southeast Idaho residents will remember 2019 as a year of progress and construction.

Some major residential developments started to take shape during the year. A historic Old Town building — Pocatello High School — underwent a major renovation, and plans were announced to redevelop the former Hoku Materials plant, which is an eyesore that’s remained idle for years.

Construction of a temple to serve The Church of Jesus Christ of Latter-day Saints represents a harbinger of future growth in the Portneuf Valley. Improvements are in the works on public amenities: A new mental health crisis center opened, the Aid for Friends homeless shelter announced plans to relocate into a bigger and better facility, and local water sports enthusiasts are eager to take advantage of new launching points on the Portneuf River.

Some significant crime stories also made headlines, including a murder allegedly committed by two California teens and the trial of a Preston teacher who was found not guilty in connection with a high-profile animal-cruelty case.

Here are the top local stories of the year, based on the voting of Journal readers:

Journal readers overwhelmingly picked the progress made on Pocatello’s future temple to serve members of The Church of Jesus Christ of Latter-day Saints as the year’s top story.

Construction of the planned 67,696-square-foot temple began in March and should take up to three years to complete. The temple will be located off of Satterfield Drive on Pocatello’s north side. The public can monitor progress of construction on a live webcam at idahostatejournal.com.

No. 2: California teens arrested in murder of elderly Pocatello woman

Law enforcement officers have testified that the teens broke into her home through a window with the intent of burglarizing it.

A once-beloved symbol of Idaho State University was placed on a fast-track toward being restored when ISU alumni Steve Rice called a university official and posed the question: “Can I buy a vowel?”

In October, ISU hosted a ceremony to dedicate a new letter “I” which was built on the side of Red Hill. The Rice family donated $225,000 to covder the entire cost of the project.

Red Hill had borne the symbol for 98 years, until the original “I” was removed based on public safety concerns. The new “I” is 71 feet long and 24 feet wide. ISU civil and environmental engineering students and faculty designed it, with advice from A&E Engineering.

No. 4: Aid for Friends relocating its longtime homeless shelter

The community’s homeless shelter, operated by Aid for Friends, has been operating at 114 percent of capacity lately, based in a single-family home with three stories built in the 1930s.

Aid for Friends Executive Director BJ Stensland announced in August her organization had started a renovation project to relocate the shelter into a larger facility at 209 E. Lewis St. The new shelter will also be accessible for people with disabilities.

The city’s science and environment division manager, Hannah Sanger, has added a new outdoor hobby to the list of activities available in the Portneuf Valley.

In July, Sanger launched the inaugural Poky Portneuf Float event, which was a well-attended community party during which throngs of people floated a short stretch of the Portneuf in small watercraft. Participants used new put-ins and put-outs, planned by Sanger and her team of volunteers.

The river is now cleared for floating from Edson Fichter Nature Area to Centennial Park, and a new access point is planned on BLM ground south of Fort Hall Mine Road. The city has also cleared another stretch of the Lower Portneuf near Kraft Road.

The first phase, which has been completed, included a new entrance and remodeled administrative office spaces. The second phase will include a connector between the two main buildings and 10 additional math and science classrooms, as well as a commons area for students. Officials say the renovation will also dramatically improve the facility’s Americans with Disabilities Act accessibility.

In April, a facility opened at 1007 N. Seventh Ave. that officials say is saving lives and improving outlooks for local people coping with mental health emergencies.

The South East Idaho Behavioral Crisis Center was the sixth crisis center to open in Idaho. The Legislature authorized $1.5 million per year to cover the first two years of daily operations, utilities and salaries to run the facility, as well as $200,000 for remodeling and start-up costs. Portneuf Health Trust purchased the building and invested another $2.5 million for renovations.

No. 8: Preston teacher found not guilty of animal cruelty

A jury acquitted a Preston science teacher of misdemeanor animal cruelty charges in early January, after complaints that he’d fed a sick puppy to a snapping turtle in the presence of students made national headlines.

Robert Crosland faced up to six months in jail and a $5,000 fine. The jury deliberated for less than a half hour following a two-day trial.

A 44-year-old construction crew leader was killed on Aug. 20 when two trusses collapsed while he was working atop an 18-foot wall. The structure was intended to be a station for the new North Bannock County Fire Department.

The worker, Peato Peato “Benjamin” Galo, left behind a wife, Maila Galo, and five children. Friends with the Building Contractors Association of Southeast Idaho and developer Lyn Yost recently announced they plan to build a home as a gift for Galo’s family.

Two competing plans were announced during 2019 for the city’s idle Hoku Materials plant. The $700 million polysilicon plant broke ground in 2007 off of Kraft Road on the city’s north side, but it never opened.

The idle facility has become a regional symbol of missed economic opportunity. Earlier this year, Pocatello Development Authority, which owned the land, rejected a request from Solargise America LLC, based in the United Kingdom, to resurrect the plant for polysilicon production. Officials were concerned that the company had failed to live up to terms of the sale agreement by refusing to pay roughly $400,000 in back taxes on the factory buildings and requesting several extensions to close on the deal.

Two local businessmen, operating as Portneuf Capital, later closed on the land for $1.25 million. They plan to build a business park at Hoku, taking advantage of its access to power and rail access and its abundance of space. The park could include a data farm, a brewery and various light-manufacturing companies, according to the businessmen.

No. 11: Proposal made to merge Pocatello and Chubbuck

A proposal to merge the cities of Pocatello and Chubbuck to improve efficiency of services and cut costs was raised an issue among candidates running for city offices in the November election.

Mayor Brian Blad cast the tie-breaking vote to give the Pocatello City Council and himself sizable raises in August.

Council members received $2,500 annual raises, and Blad was granted a $6,000 raise. Under the initial proposal, the mayor would have received a $10,000 raise, or 13 percent, and the council would have gotten an extra $5,000, or 48.5 percent. Talk of such lofty pay raises for the council and mayor spurred complaints from city workers, who were poised to receive modest raises by comparison.