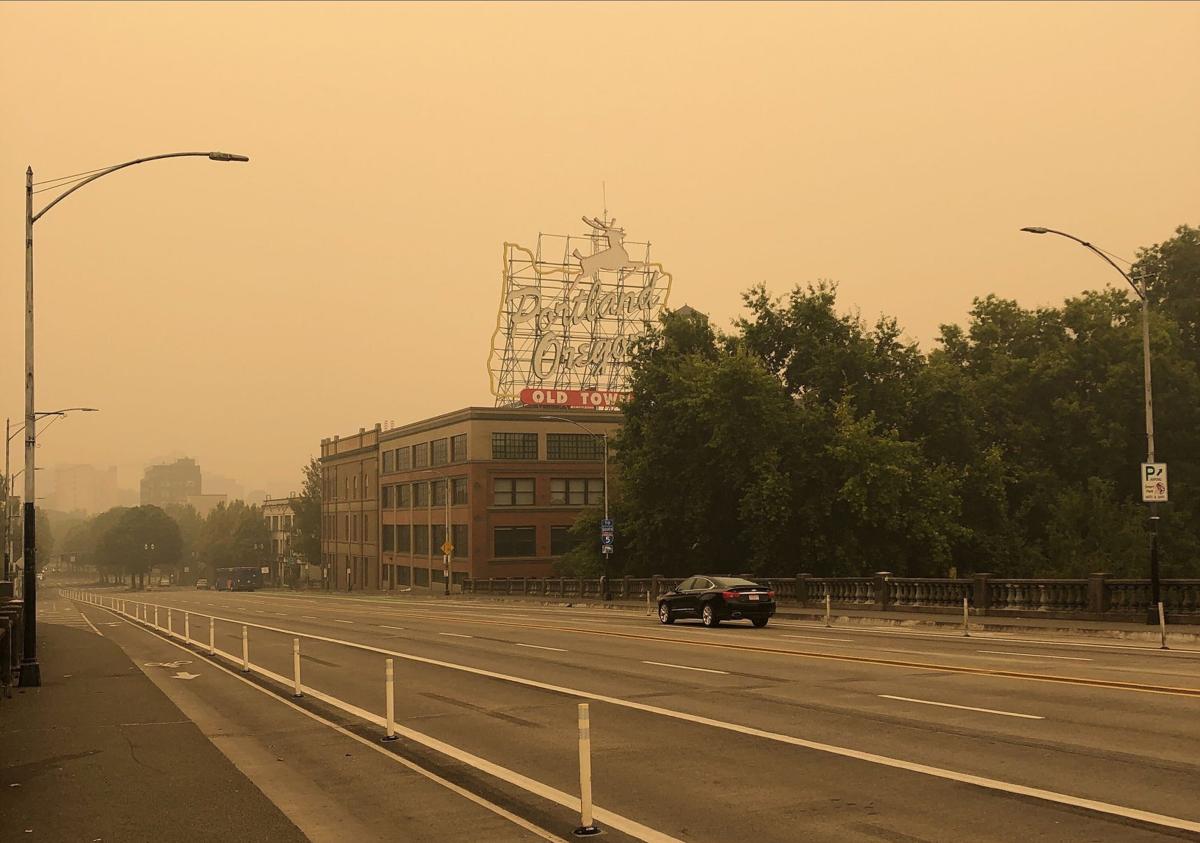 The Portland Oregon Old Town sign is seen under heavy smoke from the wildfires creating an orange glow over Portland, Ore., Saturday, Sept. 12, 2020. Wildfire smoke that poses a health hazard to millions is choking the West Coast as firefighters battle deadly blazes. The flames have obliterated some towns and displaced tens of thousands of people in California and Oregon. 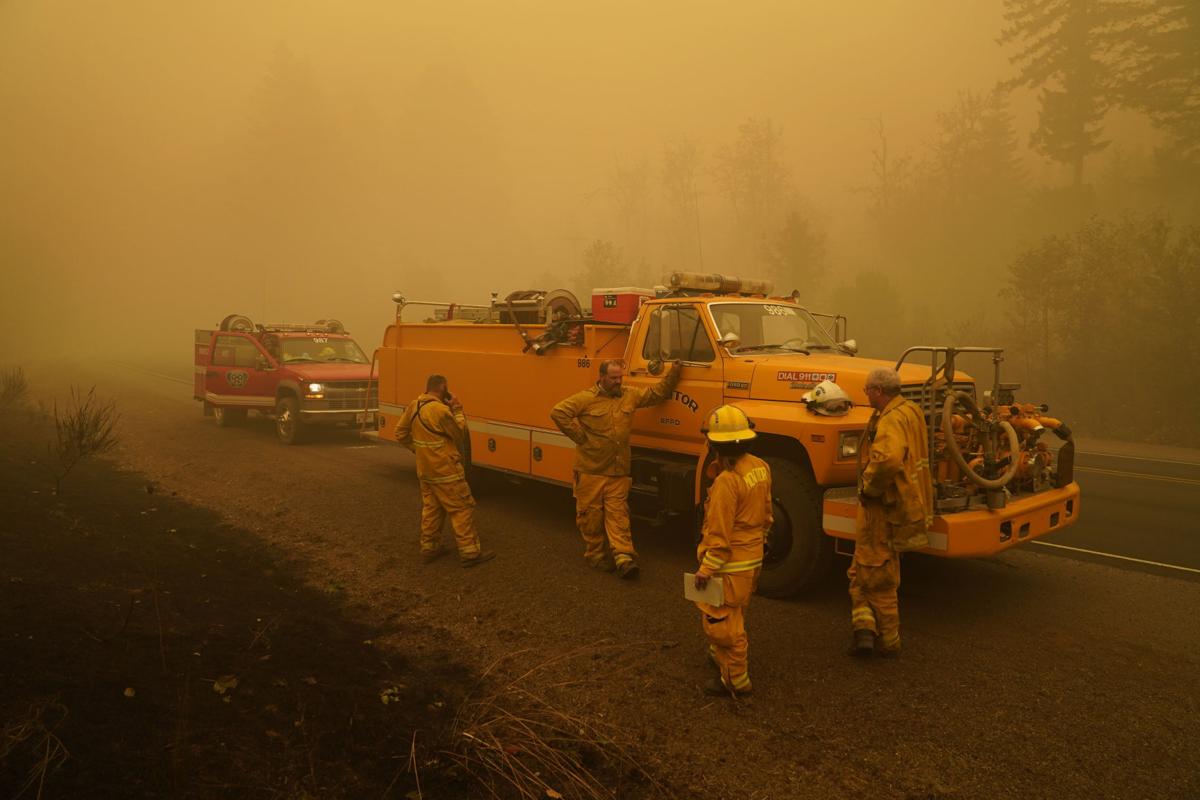 Firefighters with the Monitor Fire Department wait alongside the road surrounded by smoke in an area destroyed by a wildfire Saturday, Sept. 12, 2020, near Mill City, Ore.

The Portland Oregon Old Town sign is seen under heavy smoke from the wildfires creating an orange glow over Portland, Ore., Saturday, Sept. 12, 2020. Wildfire smoke that poses a health hazard to millions is choking the West Coast as firefighters battle deadly blazes. The flames have obliterated some towns and displaced tens of thousands of people in California and Oregon.

Firefighters with the Monitor Fire Department wait alongside the road surrounded by smoke in an area destroyed by a wildfire Saturday, Sept. 12, 2020, near Mill City, Ore.

The fires consuming the forests of California and Oregon and darkening the skies over San Francisco and Portland are also damaging a regional economy already singed by the coronavirus outbreak.

Wildfires are destroying property, running up huge losses for property insurers and putting a strain on economic activity along the West Coast that could linger for a year or more.

The credit rating agency A.M. Best estimates that insured losses from the blazes in California could top the unprecedented $13 billion recorded in 2017 when the state was hit by three of the five costliest fires in U.S. history.

“We know that the damage is widespread, but we don’t really know how many homes, how many structures have been destroyed,” said Adam Kamins, an economist who tracks natural disasters for Moody’s Analytics. “I imagine the number is going to be an unbearably high one.’’

The fires are unlikely to make much of a dent in the overall $20 trillion U.S. economy. The financial fallout will be measured in the low billions of dollars, not in hundreds of billions or trillions. To make a nationwide impact, Kamins said, it would take something like Hurricane Katrina in 2005, which disrupted oil supplies.

But the economic pain will be intense in areas decimated by fire, especially poor towns in rural Oregon and California, piling on at a time when many businesses have already succumbed to the pandemic-induced recession. U.S. economic activity collapsed at a record 31.7% annual pace from April through June. The virus and the steps meant to contain it have thrown millions of Americans out of work.

Fire wiped out much of the small community of Phoenix, in southern Oregon, including downtown businesses like La Tapatia, a Mexican restaurant opened in 1992.

“Good places like our own La Tapatia, but so many other family run businesses, (were) destroyed by the massive fire,” its owners informed patrons in a Facebook post, adding there was “lots to do” but they hoped to some day reopen.

Five hours away in coastal Lincoln City, Oregon, the Autobahn 101 survived, but the couple who own the German-style pub lost their home, their chickens and nearly all of their personal belongings to fire. They sleep in a back room of the roadside business.

The pub had already scaled back hours because of the pandemic, but co-owner Roy Baker was optimistic about its future and still has dreams of opening a small brewery inside a shipping container out back.

“We’re getting back on our feet,” said Baker, who temporarily reopened Sunday after rewiring the pub’s electricity and discarding food that spoiled after days without power. “Everybody’s coming together and helping each other.”

The Bakers were among thousands of Oregonians who evacuated; dozens are missing and feared dead.

In California, nearly 17,000 firefighters are battling 29 major wildfires. Since mid-August the blazes have destroyed 4,100 buildings and killed 22 people in the state. Fires have engulfed 3.3 million acres of land in California this year — desolation greater in size than Connecticut.

“This is like living through an apocalypse, ‘’ said Sarah Trubnick from San Francisco, where smoke from the fires has blotted out the sun.

Trubnick had to temporarily close her restaurant and wine bar, the Barrel Room, in the city’s financial district two weeks ago because of the pandemic. Even her restaurateur friends who managed to stay open are now struggling with smoke that makes outdoor seating impossible. “It’s like every day is something new,’’ she said.

Wildfires once did little economic damage because they occurred in remote forests. But Americans increasingly have moved into what was once wilderness, leaving themselves, and their homes and businesses more vulnerable.

In 2014, Max Nielsen-Pincus, chair of the environmental science and management department at Portland State University, and researchers from the University of Oregon and the U.S. Forest Service studied the economic impact of wildfires. They found the fires actually generated short-term economic gains in small communities as firefighters checked into local hotels and ate at local restaurants. Local laborers cleared roads and helped rebuild.

But such economic bumps are usually short-lived. By spring, affected economies typically lost momentum and fell into a period of slower growth that could last up to 18 months. Tourism could suffer because “visitors may not want to return fearing a blackened landscape,’’ according to the paper published in the journal Forest Policy and Economics. And economic activity such as logging can be wiped out.

Rebuilding can kick start a local economy, but a lack of resources to see those plans through can lead to “a period of limbo.’’

“Urban areas like the suburbs of Portland — they’ll probably recover pretty quickly,” Nielsen-Pincus said in an interview. “But these rural communities that are impacted by nearby fires — this could be a drag on their economy that lasts months or years.’’

He said poor rural communities, like those in Oregon’s hard-hit Santiam Canyon east of Salem, will need federal and state aid.

All five of the costliest fires in U.S. history, measured by insured losses, have occurred in the last three years, all in California, according to the Insurance Information Institute. That includes the November 2018 Camp Fire that destroyed Paradise, California, and left more than 80 people dead and up to $10.7 billion in insured losses.