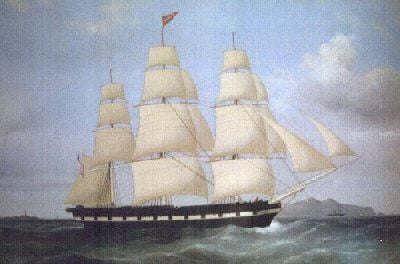 The Brooklyn was the ship that took Mormons to San Francisco and was captained by Sam Brannan. 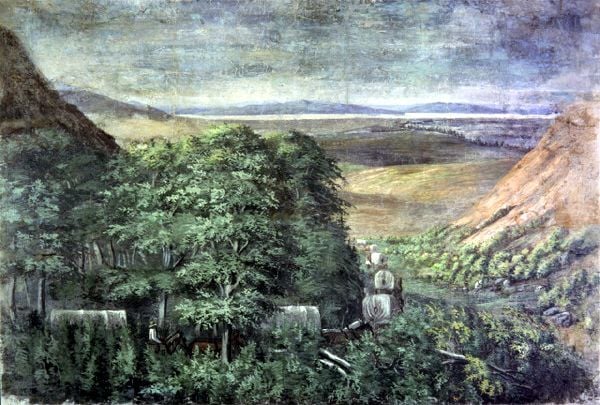 This painting was created to show the view of those as they would crest the Rocky Mountains and enter the Great Basin. 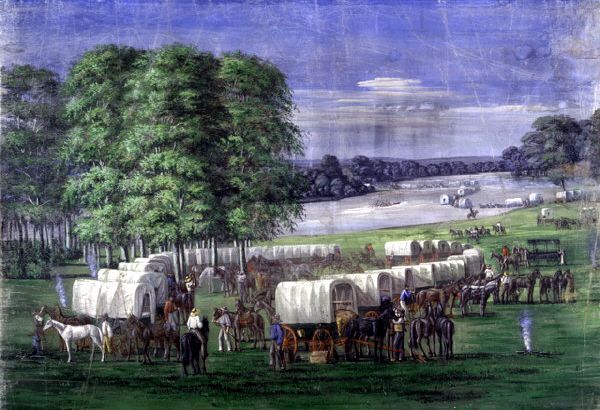 The painting depicts the covered wagons used to cross the Midwest. It is said that this is a setting in Nebraska.

The Brooklyn was the ship that took Mormons to San Francisco and was captained by Sam Brannan.

This painting was created to show the view of those as they would crest the Rocky Mountains and enter the Great Basin.

The painting depicts the covered wagons used to cross the Midwest. It is said that this is a setting in Nebraska.

The Mormon pioneers prepped to leave Winter Quarters with the first group heading out being the group known as the Vanguard Company with Brigham Young leading the pack. Young had spent time researching the route they would take to get to the Salt Lake Valley by speaking to others who had made the trip along the Oregon Trail and California Trail.

The reconnaissance that Young conducted would provide the company with enough information that they felt comfortable in leaving Winter Quarters and heading west. They would follow the same trail as those who were traveling to Oregon and California which would later be named the Emigrant Trails. The goal of the Vanguard Company was to break new trails through the Rocky Mountains and find water sources as well as possible places to camp and rest. Trekkers would be equipped with only the items they could carry in either a draft animal’s wagon or on hand carts that they would pull while walking on foot.

The group was comprised of 143 men, including three enslaved African-American men. They would also have three women and two children joining in the trip along with eight of the Twelve Apostles. The Vanguard Company would be separated into 14 different columns with a militia and night watch led by Stephen Markham. Concerned about issues with Native Americans, they felt it imperative to protect the columns with the militia.

On the trails, according to journal accounts, Young served as the leader throughout the entire trek, including reprimands and punishment when people would be too rowdy during resting times and when the hunters of the company killed more animals than what they could eat. He chastised the men for killing more than what was needed and accused them of being wasteful. The travel was a daunting task, they would rise at 5 a.m. and be on the trail by 7 a.m. where they would travel as far as they could be 8:30 p.m. and be required to be in bed by 9 p.m. This was the schedule for six days a week, with Sunday — the Sabbath — being a day of rest and worship.

They originally tracked their distance traveled with William Clayton being tasked with counting the revolutions of a wagon wheel throughout the day and then doing the math based on the circumference of the wheel. This would spark the idea of creating a device to automatically count the revolutions of the wheel. Clayton spoke with Orson Pratt about the idea of creating an invention that would automatically count the revolutions of the wheel so that they would only be tasked with the final calculation. They would name this new tool the Roadometer and would later be the basis of the design of the odometer that is in use today.

Each group of people were set with tasks that they had to complete, and the women were not excused from these duties. Besides conducting what was considered their standard activities such as cooking, cleaning, and looking after the children, the women also served as scribes along the way, asked to keep accurate journals to ensure that their journey would be easily replicated by others. The three women brought on the first trek were wives of important members of the company, including Brigham Young, and were brought to not only tend the children but also to help see Lorenzo Young’s wife through the travel, who had fallen ill prior to the departure. The group would be joined by a much larger group of women pioneers when they reached Laramie, Wyo.

The first segment of the trek from Winter Quarters to Laramie took the group six weeks, arriving at Fort Laramie on June 1. At Fort Laramie, their company would grow in size — adding the women with the group that traveled from Mississippi on a more southern route than that of the Vanguard as well as the Mormon Battalion who spent their winter in Pueblo, Colo., after falling ill and being excused from duty. The now larger-than-life company would continue to travel the well-established Oregon Trail for miles and reach the difficult crossing of the Platte River and an immediate crossing of the Sweetwater River shortly after. Young had directed a group of nine men to stay behind and build a ferry at the river crossing under the direction of Thomas Grover. The ferry would be an important form of income for the settlers, charging upward of $1.50 per wagon.

Near the end of June, the Vanguard would make its way to Green River, Wyo. Young would be met by Sam Brannan who had piloted the Mormon ship Brooklyn and land in present-day San Francisco. He urged Young to take the company all the way to California, but Young was set on the Great Basin. He would also meet with Jim Bridger at this point who was a well-established mountain man who would counsel Young on ways to access the Great Basin. Bridger provided important information to Young that would secure their decision to head to the Great Basin, explaining that local Native American tribes were well-established farmers and that the waterways were primed with fish. He also noted that wild fruit grew in the area as well. He did warn that there is the ever-present danger of frost in the colder months, but Young was set to make the trip to Salt Lake.

They would get back on the trails finding themselves at Fort Bridger on July 7, where they would be joined by 13 more of the sick Mormon Battalion for the last leg of the trek. They would find themselves in the most difficult part of their journey at this point, crossing through the rough Rocky Mountain passes as well as the ever-present danger of wildlife and mountain fever brought on by Colorado tick fever. Those who fell ill to the tick fever, including Brigham Young, would fall behind the rest of the company and a scouting party would be created to forge a trail ahead of the rest of the Vanguard.

The scouting party would reach the valley three days before the entire company with Orson Pratt and Erastus Snow being part of that. Pratt wrote in his journal that they could not refrain from screaming shouts of joy when they reached the Salt Lake Valley. On July 24, Young first saw the valley from a wagon being driven by Wilford Woodruff, and it is reported that Young stated, “This is the right place, drive on.” That declaration is marked in history with a monument in the exact location of that statement for people to visit.

Only four days would pass from when Young reached the valley to where he would pick the location of the future Salt Lake Temple and present a larger plan for city development for the group to approve. It would be less than a month before Young and a select group of the Vanguard would head back to Winter Quarters to lead the next group across the Midwest to the Great Basin.