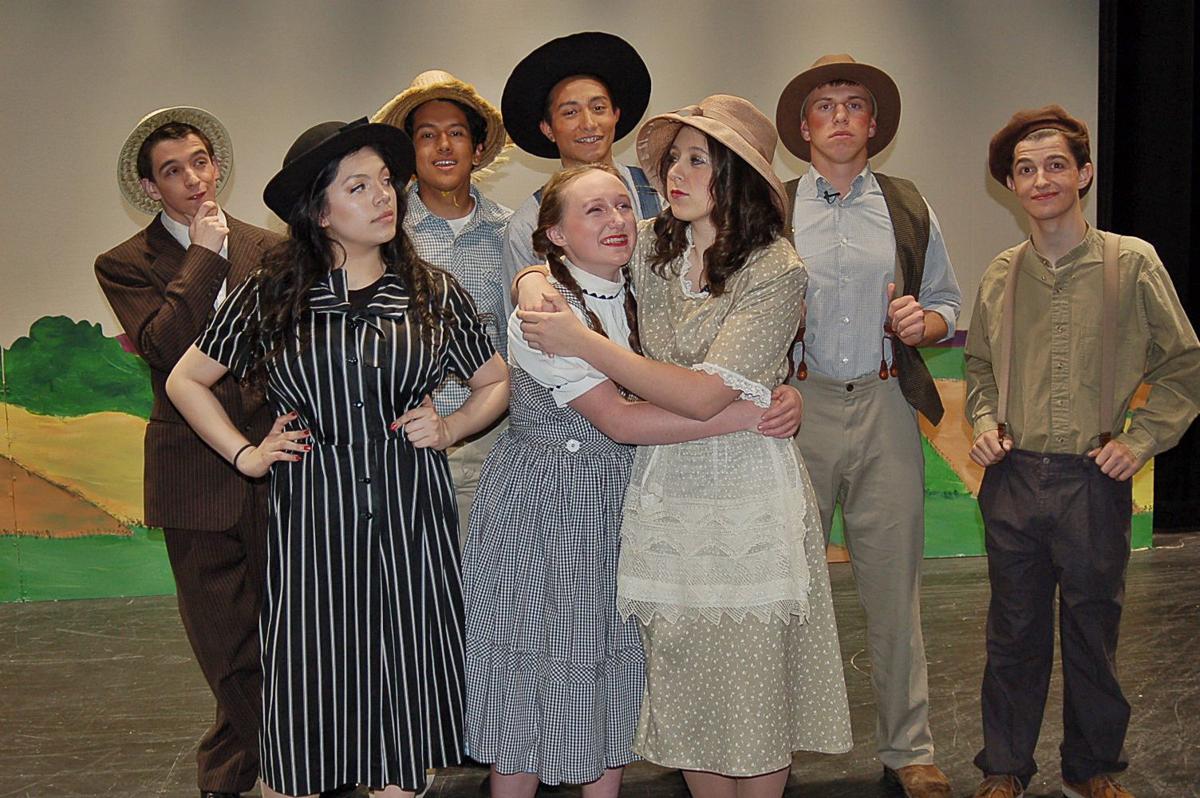 Cast members take a bow at the end of their performance of "The Wizard of Oz" in Aberdeen Friday night.

Cast members take a bow at the end of their performance of "The Wizard of Oz" in Aberdeen Friday night.

ABERDEEN — “The Wizard of Oz” has enchanted people of all ages for many years, and the Aberdeen High School music department’s production of the timeless classic does exactly that.

There is one more night left for the show at the Aberdeen Performing Arts Center, with the show going on inside the Wayne Millett Theater Monday at 7 p.m.

A big crowd was entertained by the production Friday night. The “Wizard of Oz” was a show that depended on the star power of a young Judy Garland as Dorothy when it first came out in theaters in 1939, with her showing lots of sweetness with a touch of toughness when it was needed, along with a strong singing voice.

Jenny Wahlen as Dorothy in the Aberdeen production captures all of that, teaming up with the dog Daisy as a perfect “Toto.”

But the star power in the original went beyond Garland into the supporting cast, each of them important to the quality of the show. In the Aberdeen production, it can be hard to call the other players “supporting.” They stand out themselves, bringing plenty of laughs.

Joseph Carasco makes a wonderful “Cowardly Lion.” Eduardo Barrera brings the physical touch needed to play Scarecrow and make it work. Nathaniel Tilley as the Tinman has the touch it takes to play that character, down to his reactions when he needs oiled.

Dawson Driscoll is a firm Uncle Henry, and Brook Gugelman displays a fine singing voice when she sings a solo as the good witch Glinda.

Braiden Wheeler as Professor Marvel/the Wizard doesn’t have a lot of stage time, but when he is onstage he makes the most of that time.

Jimena Serna as the wicked witch has the right touch of wickenedness and the perfect scream for the part.

Even the three crows — Jude Allen, Angel Lemos, and Logan Tilley — are comically entertaining as Scarecrow is first introduced.

In short, the Wayne Millett-directed performance is a delight from beginning to end, again capturing the hearts of all ages. It has a way of engaging the audience, from the way the lighting is handled when lightning flashes to the creative way everyone but Dorothy and Toto get into the storm cellar, along with the entrances of the Winkies.

You’re left wondering how the cast of Munchkins will handle their parts, and the results are fun, right down to the choreography.

The costumes are all colorful and fully detailed. The makeup is a wonder, and it makes you wonder how the costume changes and makeup being taken off before the final scene will be done, but it all goes off without a hitch, a credit to the backstage crew.

It’s obvious that much work went into the set design.

One of the showstoppers of the night was the “Jitterbug” scene in the haunted forest.

All in all, the production stays true to the spirit of the classic, leading to a rewarding night of entertainment.