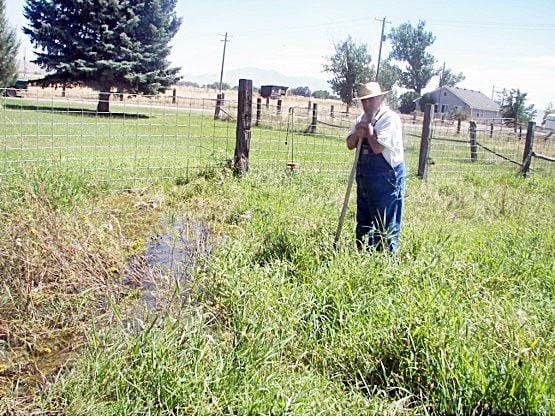 Wearing his customary bib’alls and straw hat, semiretired farmer Mike Caldwell rests a while on the handle of his shovel while preparing to water the lawn at his house off Truchot Road. 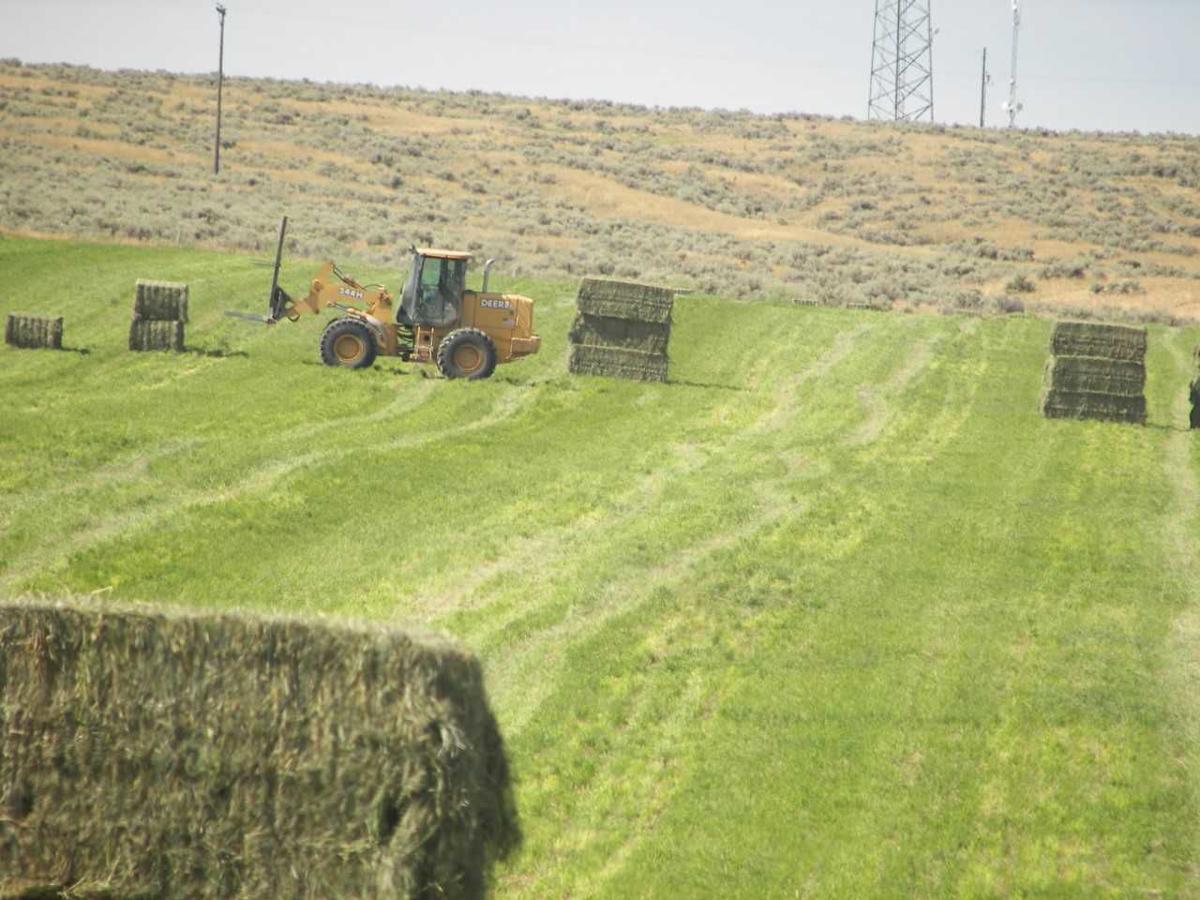 Alfalfa hay grown on Mike Caldwell’s 200-acre patch of land on Ferry Butte is being stacked and read to move.

Wearing his customary bib’alls and straw hat, semiretired farmer Mike Caldwell rests a while on the handle of his shovel while preparing to water the lawn at his house off Truchot Road.

Alfalfa hay grown on Mike Caldwell’s 200-acre patch of land on Ferry Butte is being stacked and read to move.

GIBSON – Although he grew up on his parents’ ranch and helped with the cattle and growing the crops needed to see them through the winter, Mike Caldwell had no aspirations of being either a farmer or a rancher.

Until the opportunity arose in 1970 for him to lease an 80-acre piece of farm ground on the Fort Hall Reservation, where he grew up in the shadow of the landmark called Ferry Butte, and for reasons he’s still not sure about today, Mike decided to try his hand at farming.

He graduated from Blackfoot High School 50 years ago, where he had been student body president, with a full-ride scholarship to college. He wasn’t quite sure which path his life should take. then he learned of the 80-acre tract for lease and decided to make a bid on it.

Seated at a table in the living room of the house he shared with wife Helen for 25 years and wearing the bib’alls and straw hat he favors for work, Mike reflected on that decision and the years he spent farming before being forced into semi-retirement at 68 by the onset of macular degeneration.

The room is a little cluttered now, lacking a woman’s touch since Helen walked on last year, but is still comfortable, with a fireplace at one end, paintings of the old west that Mike collected over the years on the walls and a buffalo robe thrown across a leather couch, and he’s adjusting to life with macular degeneration.

He didn’t have any money when he decided to tackle farming, Mike said, so he asked his dad for help. But Lyle Caldwell wasn’t keen on his son’s idea. “He told me he didn’t think I’d make any money at it, but finally agreed to co-sign a note at the bank — just enough for me to buy seed and pay the lease, and said he’d let me use his planting and harvesting equipment.

“In exchange for me doing all of his farm work that summer,” Mike added wryly. “I guess he thought that might stop me.” But it didn’t.

It was an ambitious undertaking, he admits, because his father had some 400 acres of hay, grain, and pasture, but he set to with a will, partly to prove he could do it.

The leased acreage already had alfalfa on it, so he kept part of that, but planted 22 acres of potatoes, and found he had enough money left to plant some wheat and barley. Sprinkler irrigation hadn’t yet come into its own, so he flood irrigated, and caring for two farms kept his nose to the grindstone that summer.

“Then I did something stupid,” he said. “I made money when other people, mainly my parents, thought I wouldn’t.”

He estimates he got 6,600 sacks of potatoes that year and sold them to Croft’s fresh pack shed in Firth for $1.95 a sack. He calls making money on his first crop stupid, Mike said, because that got him hooked on farming, and any ideas of college or other occupations went out the window.

He had to go into a partnership on the potatoes because he didn’t have, and couldn’t afford, the needed equipment to plant and harvest them, but cleared enough to pay off the loan, buy a Datsun pickup and a trailer house that he had set up on the spot where his house sits today.

His operation grew over the years as he leased more ground when it was available, bought some when he was able, and ended up farming 1,000 acres in the valley along with 800 acres next to the Faulkner ranch at Chesterfield, the place built by his grandfather Roy.

Mike emphasizes that he always paid the appraised value of the land he leased, knowing how some of the owners struggled just to live.

Although he’s a member of the Shoshone-Bannock Tribes, Mike said, he never attempted to obtain money for farming from their credit department. The land he owned as well as that he leased on the reservation is held in trust by the federal government, so he could not use it as collateral for a farm loan, but banks would do a crop lien, and that’s how he financed his farming operation over the years.

Combined with money he saved by putting it into CDs when his crops were sold each year to prove he was a good risk, good credit was sufficient to keep him going,

That and the fact he opted for conservatism. He didn’t let the knowledge he was making money at farming go to his head and get too big for his britches, as the old saying goes. “I didn’t try to get so big I couldn’t afford myself, or take on more than I could handle.”

He also didn’t go into debt buying high priced potato planting and harvesting equipment, which meant he always had to have a partner in that part of his farming operation. But he says he still made money.

He hired two migrant families to do some of the work and feels he was blessed with good help because of it. He’s proud to say that the Sanchez and Godinez families all became American citizens.

He married his first wife Kathy, and they had three children, Cory, Jake and Merrilee. But like some of the successful farmers of his day, he enjoyed going to town in his spare time to sit around and pass the time of day lifting a glass with a few of his cronies. Before long he found he’d developed too close a relationship with old John Barleycorn and ended up in divorce court.

He struggled with alcohol abuse for a few years, and eventually concluded that wasn’t the life for him. So he got sober and stayed that way. “It was tough to start with,” Mike says, but I got to like being sober and helping other people get sober,” by which he meant that he spends some of his time mentoring people who are struggling with alcohol abuse. He eventually remarried and spent some good years with Helen.

One day about eight years ago to his surprise, he got a call from daughter Merrilee asking if she bought a few cows if he’d help her with them. Now they’re partners, running 130 head of mother cows on the Caribou National Forest summers.

Mike had to give up the day-to day farm work, so he leases out most of his ground, but kept the 200 acres he bought on the Ferry Butte, where he now crop shares with someone else to grow and harvest hay for the cattle, along with 80 acres at the home place where the cows are wintered and he still does the feeding.

He can still see well enough to drive to town for groceries and even bought a dragline that he uses to do stuff like clean out potato cellars and ditches. He lost the ability to read and watch television, but has a good CD player and plenty of audio books to listen to. He also has an iPad that keeps him current on what’s happening in the sporting world. His mentoring work takes him to conferences out of town, and to get there he makes good use of the Salt Lake Express.

It’s lonely around the Caldwell home without Helen, but Mike says he gets by. He doesn’t crave company, but the latchkey is always out at his house. “I’m usually home. Unless I’m not,” Mike says.