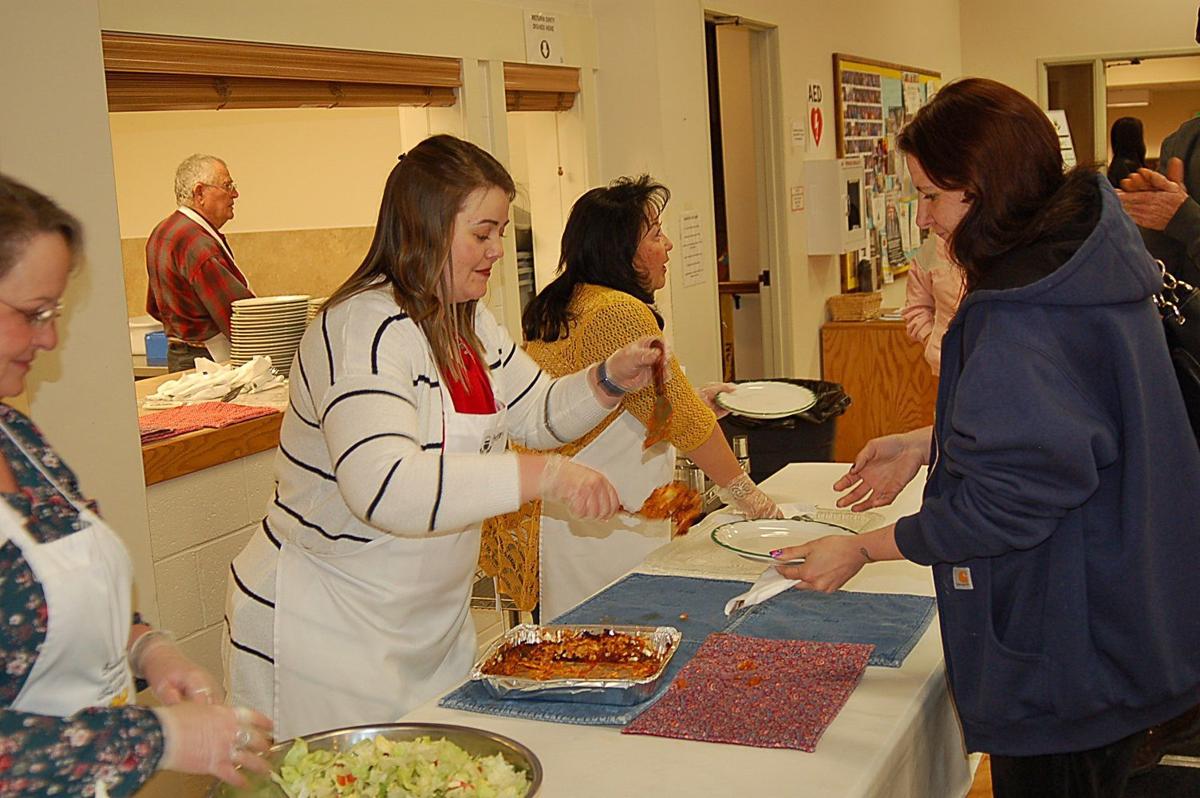 Members of the Greater Blackfoot Association of Realtors were on hand Tuesday night to serve meals at the Community Dinner Table at Jason Lee Memorial United Methodist Church. Meals are offered at no charge during the winter season every Tuesday from 5-6:30 p.m. 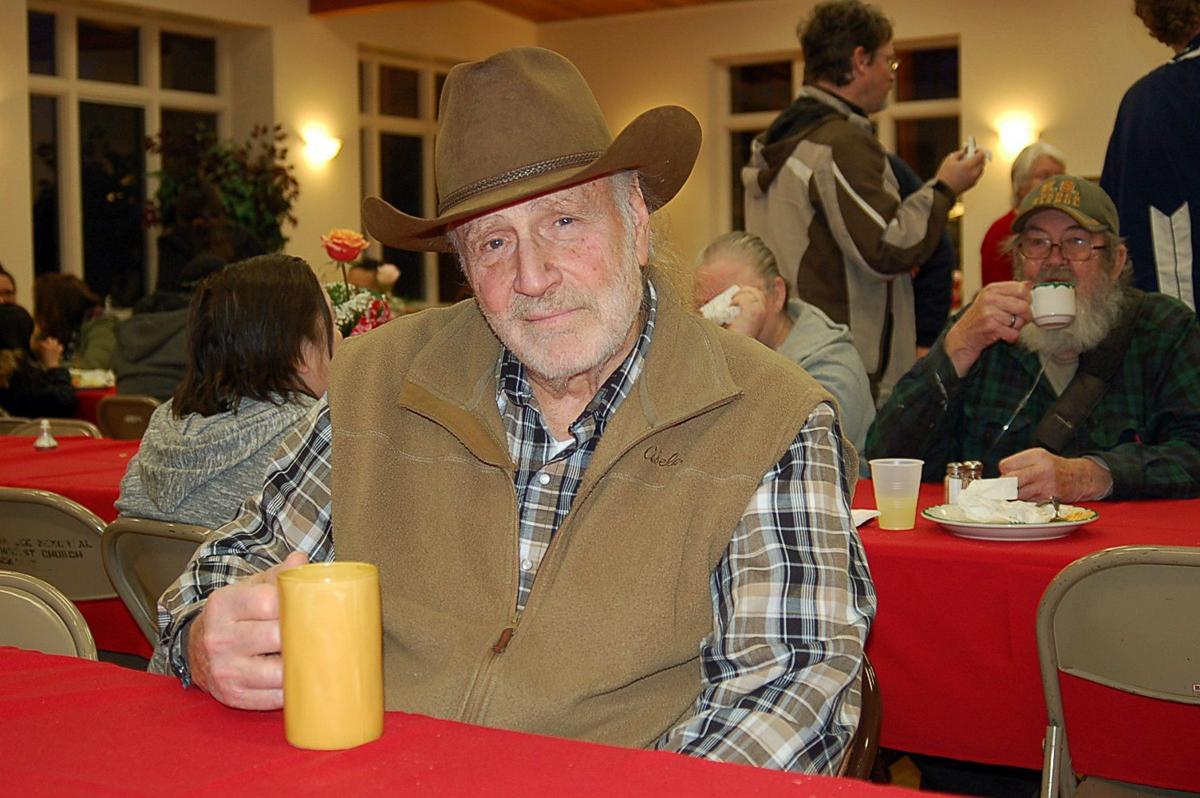 As one of the founders of the Community Dinner Table and a lifetime board member, Lee Hammett is a familiar face at weekly meals.

Members of the Greater Blackfoot Association of Realtors were on hand Tuesday night to serve meals at the Community Dinner Table at Jason Lee Memorial United Methodist Church. Meals are offered at no charge during the winter season every Tuesday from 5-6:30 p.m.

As one of the founders of the Community Dinner Table and a lifetime board member, Lee Hammett is a familiar face at weekly meals.

BLACKFOOT — It’s been reported that the number of people being fed at the Community Dinner Table (CDT) on Tuesday nights at Jason Lee Memorial United Methodist Church at 168 S University Ave. is dropping.

Maybe that has to do with the economy, and people are better able to feed themselves.

Maybe it has to do with people moving in and out of the area, and newer residents aren’t familiar with the dinners being offered each week from 5-6:30 p.m. through the colder season.

Regardless of the reason, the dinners are still being offered to serve not just the hungry but the lonely as well.

“We have a mission and we are still filling it,” said Lee Hammett, one of the founders of the community event. “A lot of people have needs, you just can’t always see them.”

Another service offered by the CDT has to do with bringing the community together, something Hammett says has been a big success.

The dinners are staffed by volunteers who cook, serve, and clean up along with anything else that’s needed. They come from service-oriented organizations (the Greater Blackfoot Association of Realtors was the group serving Tuesday night) and faith groups. The dinners are totally free of charge.

The dinners started in the 2008-09 season, when Ron Thompson — a member of the Church of Jesus Christ of Latter-Day Saints — talked over needs in the community with Hammett — a Methodist — and how they could join together to help fill them.

“At that time, the community was separated spiritually,” Hammett said. “The different groups just kind of stayed in their own lane.”

That’s not the case any more, especially with the CDT, he added.

“It shows what happens when God has His hand in it,” Hammett said.

Thompson and Hammett are both lifetime CDT board members now. Hammett estimates that at the Feb. 25 dinner they will have served 75,000 meals in the seasons they’ve been offered.

“It’s like feeding everyone in Bingham County twice,” Hammett said.

Hammett was sitting at a table at the far west side of the Methodist church’s fellowship hall Tuesday, where this week’s dinner was starting to wind down. He thought of all the people — most of them elderly — who have sat at that table through the years, for various reasons. He focused on the societal need.

“There are people who have come here just to people watch, and we’d like to encourage more people to come,” he added. “They just need to get out and see people.”

The needs revolve around some common denominators in living life — shelter, water, food, social contact. The dinners may involve different spiritual groups, but there are two rules Hammett said the CDT has always followed: “No proselytizing. no judgments.”

He sees the dinners as being a life saver, and he points to a bracelet he wears on his wrist for his own inspiration. It has the letters “WWJD” for “what would Jesus do?”

“That’s the bottom line, do what Jesus would do,” Hammett said. “How do we demonstrate our belief?”

The dinners have helped the members of the community get to know each other, one of the goals from the beginning.

Hammett said he gets a heartwarming feeling out of the CDT.

“It’s magical how it keeps working,” he said. “When you think about it, we’ve helped at the city and county level, we’re helping people the county and the city won’t have to help with meals between the Community Dinner Table and the food pantry.”

Using a conservative figure of $8 per meal, Hammett calculates that the CDT has provided $637,500 worth of meals, and that’s not connecting the pantry. With the pantry involved, he estimates that over $2 million worth of food has been served to the community, free of charge.

“And we’ve never taken a single federal dollar to do it, it’s all donations,” he said. “There is no such thing as money for this service.”

People in need may make up a part of what the CDT serves, but Hammett reiterates the other needs being served as well — perhaps just someone needing a break every week from cooking a meal.

“Lonely people are easy to find, that’s who we want to bring in,” he added.

“Helping people is what this community is all about. If we can provide meals for the people without draining resources, that’s wonderful. This will go on because the people on the board are passionate about it.”