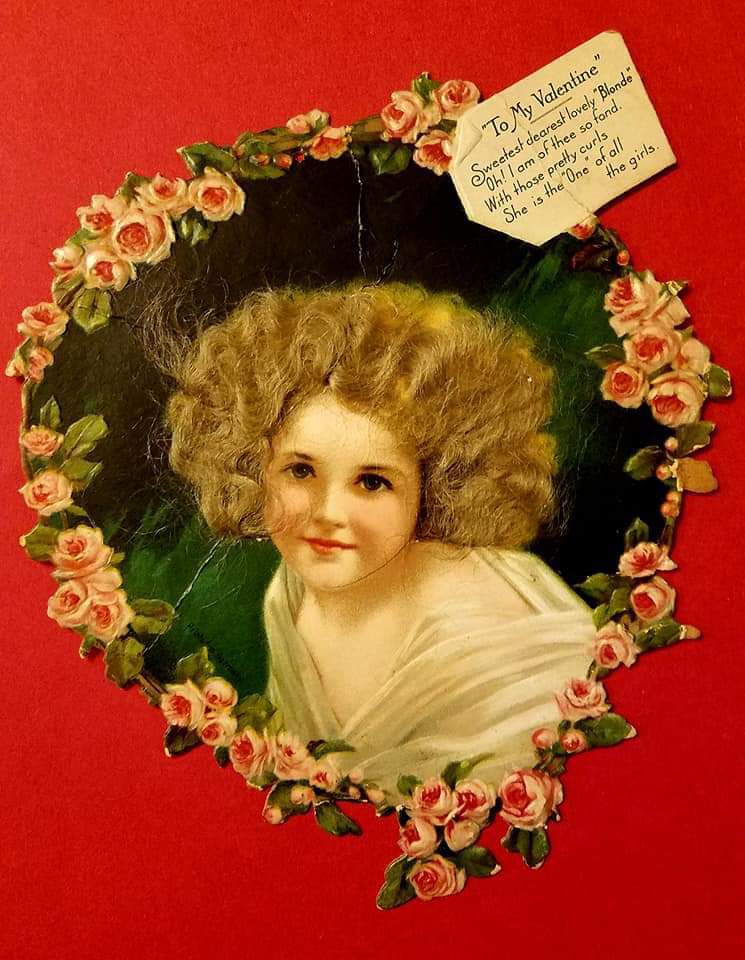 Betty Herbst is sharing a Valentine’s Day treasure. She is in possession of valentines received by her mother, Dorothy Peterson Wheeler. The valentines are more than 100 years old as Betty’s parents married in June of 1918 and the holiday notes were received before then. The cards are colorful, unique, and the details are outstanding. One card in particular shows the profile of a young woman. If you look closely you can see that the hair on the young woman is actual human hair. 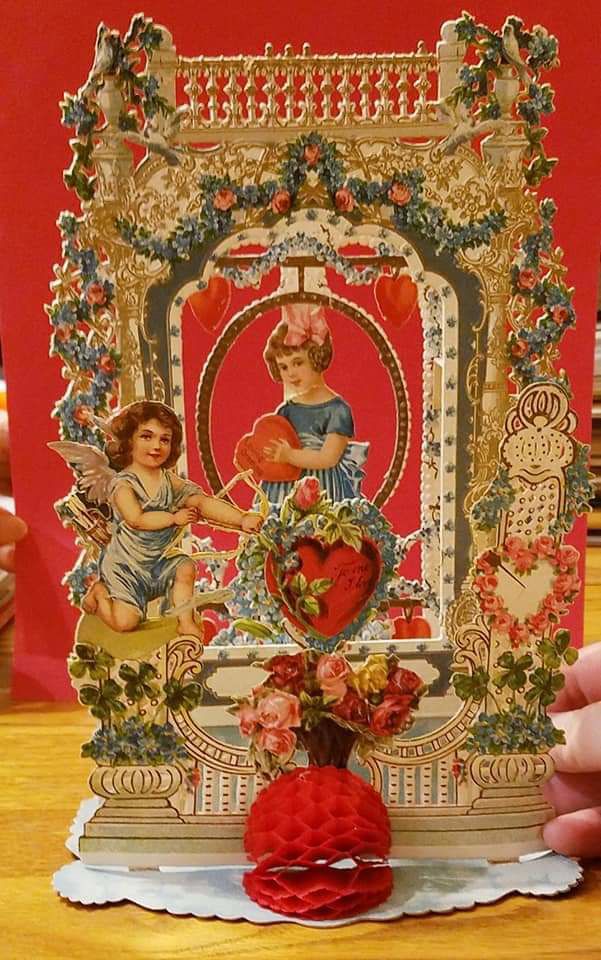 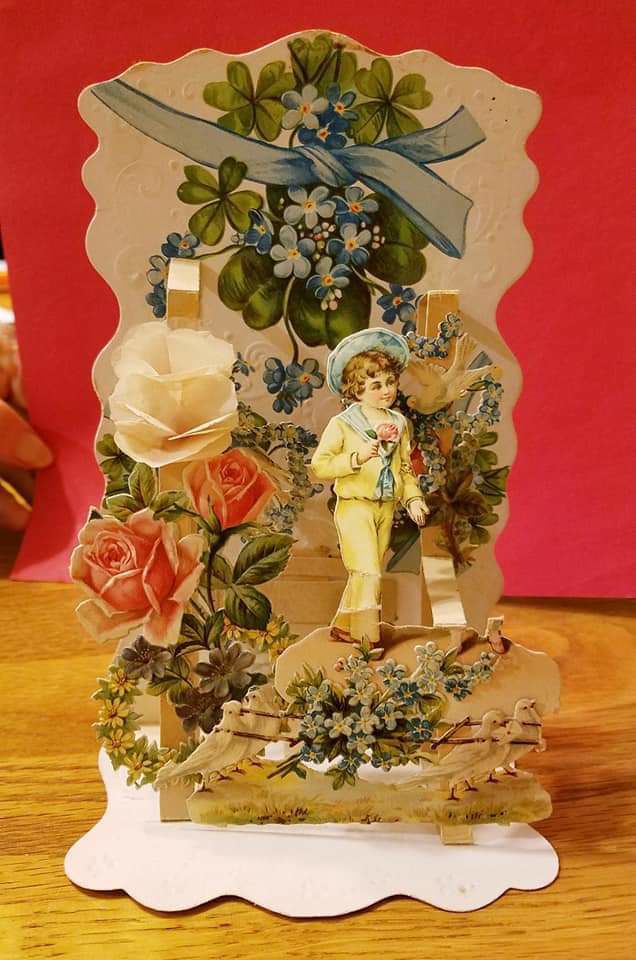 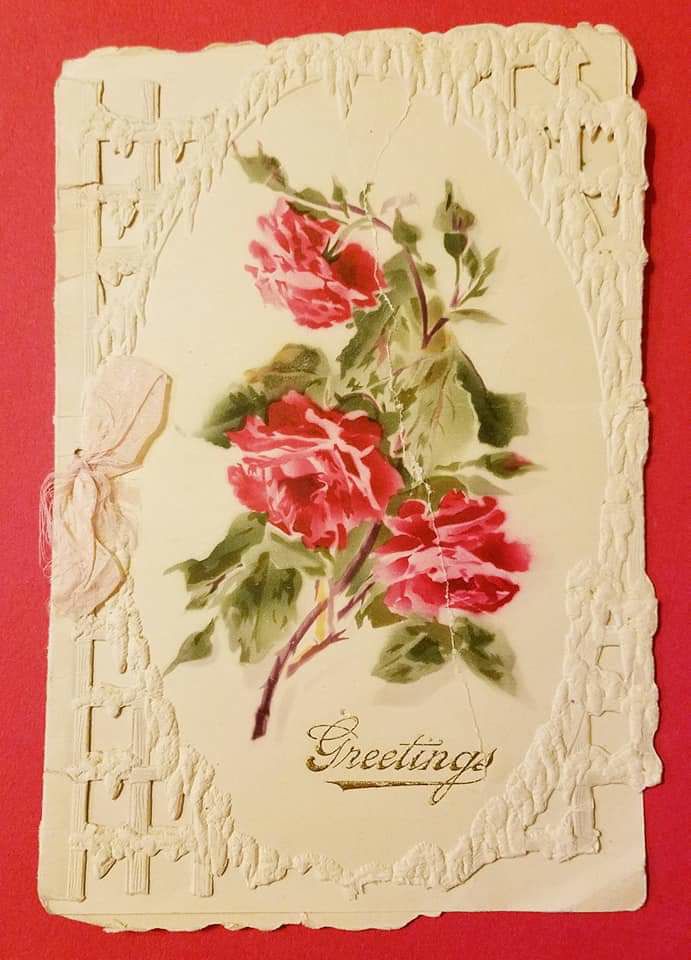 Betty Herbst is sharing a Valentine’s Day treasure. She is in possession of valentines received by her mother, Dorothy Peterson Wheeler. The valentines are more than 100 years old as Betty’s parents married in June of 1918 and the holiday notes were received before then. The cards are colorful, unique, and the details are outstanding. One card in particular shows the profile of a young woman. If you look closely you can see that the hair on the young woman is actual human hair.

This all came about because her son, Parker Owens, then of Rapid City, S.D., saw information about it in a military magazine and reported his parents were eligible. The Curtis Publishing Company called the Owens and requested information and for Maudie to write about their romance. She wrote about her and Hugh’s love story and was excited to see it was accepted as one of the 33 love stories of WWII. that made it into the publication.

I thanked her for sharing their love story. Maude and Hugh both passed away some time ago, and are both buried in Logan, Utah, where they met, fell in love, and where Hugh graduated from Utah State University. I’m pleased to share their love story.

Maudie was attending Utah State University at Logan when she met her future husband, Hugh, who was a U.S. Marine from Topeka, Kan. The Marines had been sent to Utah State for a thee-month radio material school.

Maudie was part of a welcoming committee to make the Marines feel at home. She had gone to the reception and found it was very boring. She vowed she would not go to another reception. However, when a break came and a few were left on campus, she said, “I was persuaded to do my duty one more time.” This is when she met Hugh.

They struck up a conversation and he asked her for her telephone number. Hugh called her the next day and asked her for a dinner date. She accepted, and they ate at the historic Bluebird Café in Logan. “We just had such a good time, I began seeing him, regularly,” she commented.

Hugh finished the Radio Material School and was assigned to Treasure Island Naval Base for five more months of training and then he shipped out to the South Pacific. Maudie told of being restless and joined the U.S. Navy to become a W.A.V.E. She chose the U.S., Navy because, “They had the prettiest uniform.”

She was sent to Hunter College in New York for boot camp and then to San Francisco for recruit training. Following her training she was assigned to Salt Lake City.

Hugh had written Maudie and told her that he was pleased with her joining the military. He had been assigned to the 12th Anti-Aircraft Battalion at Pearl Harbor and then shipped to Townsville, Australia. This was a strong point for the war in South Australia, They protected the construction crew building an airstrip. Then they were moved to New Guinea where a major front was opened up against Japan in April of 1944.

Hugh applied for officer training and was shipped back to the United States after he was accepted. He was commissioned as a Second Lieutenant and sent to Quantico, Va. He received a three-week leave and asked Maudie to join him in Topeka, Kan., to meet his parents.

She went with him and he proposed to her. She accepted and when she returned to her assignment in Ogden, her engagement ring arrived by mail a short time later.

Hugh received his discharge Dec. 8, 1945, and he married Maudie December 19 in San Francisco. Maudie was discharged Jan. 4, 1946. Following their discharges and a brief stay in St. Louis, they returned to Logan.

Hugh graduated from Utah State in 1949 with a master’s degree in education. Maudie worked at Utah State and took care of their son Parker. Hugh taught in Rexburg for six years and then their son David was born. They came to Blackfoot in 1954 where Hugh taught math and physics at Blackfoot High School until 1972. He became the business manager for Blackfoot School District 55 until he retired in 1985.

Maudie took classes and graduated from Idaho State University. She was an English teacher at Blackfoot High School for 29 years. Hugh and Maudie were married for 56 years.

Hugh continued his military career immediately after his initial discharge, joining the U.S. Marine Corps Reserve and then the U. S. Army Idaho National Guard. When he retired in 1972, he was a Second Squadron Commander of the 116th Armored Calvary Regiment.

Hugh and Maudie are both proud to have served in World War II. They are also proud of their military family. Hugh’s father, Rilan Parker Owens, served in the Spanish American War. Hugh was a 30-year veteran and his son, Parker, retired as a Lt. Colonel after 22 years in the U.S. Air Force. A grandson, Jeffery Paul Owens, is the fourth generation to serve in the military. At the time the Owens’ love story was originally published, he was attending the U.S. Coast Guard Academy in Connecticut anticipating a spring graduation and assignment as an Ensign.