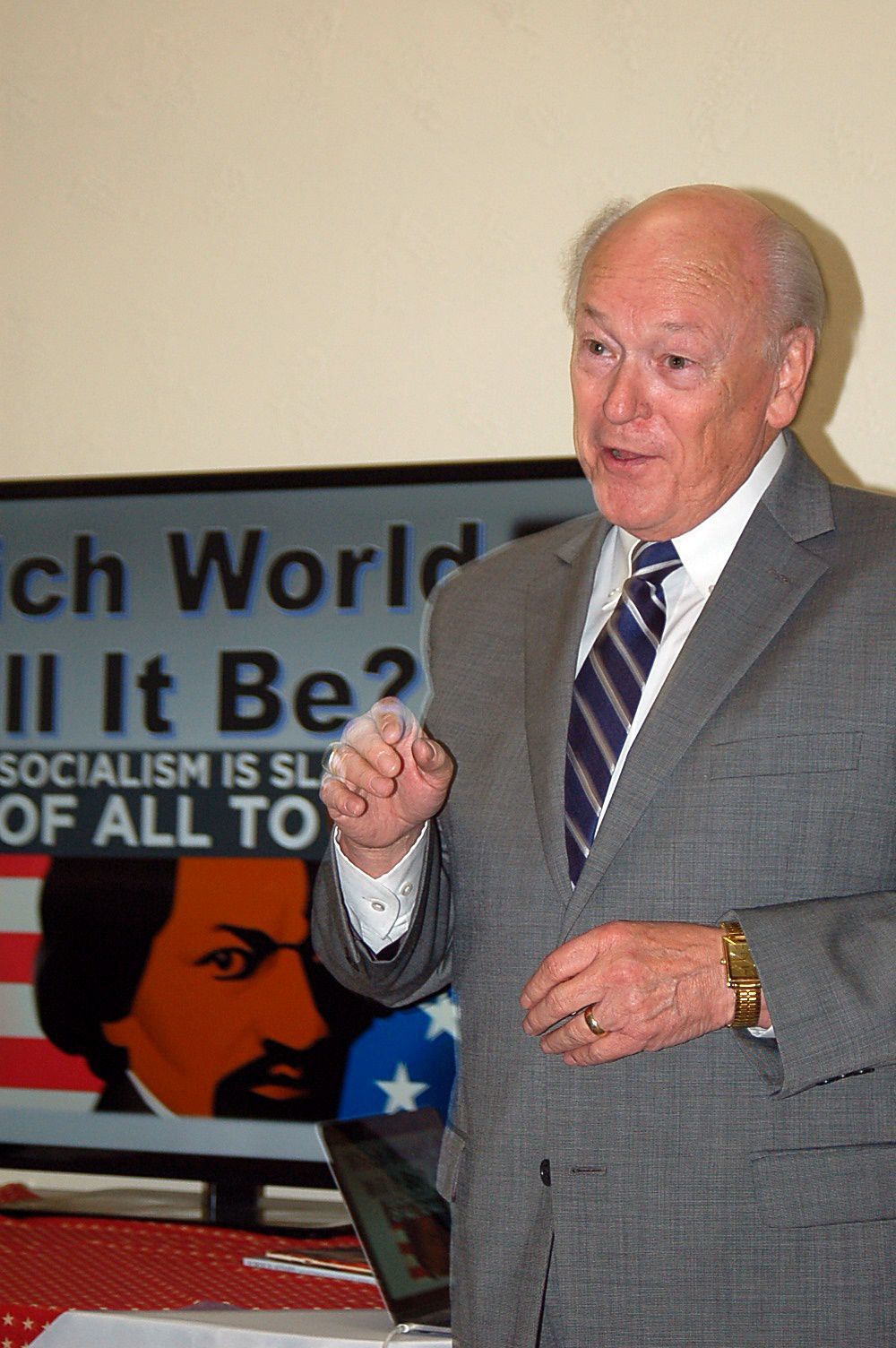 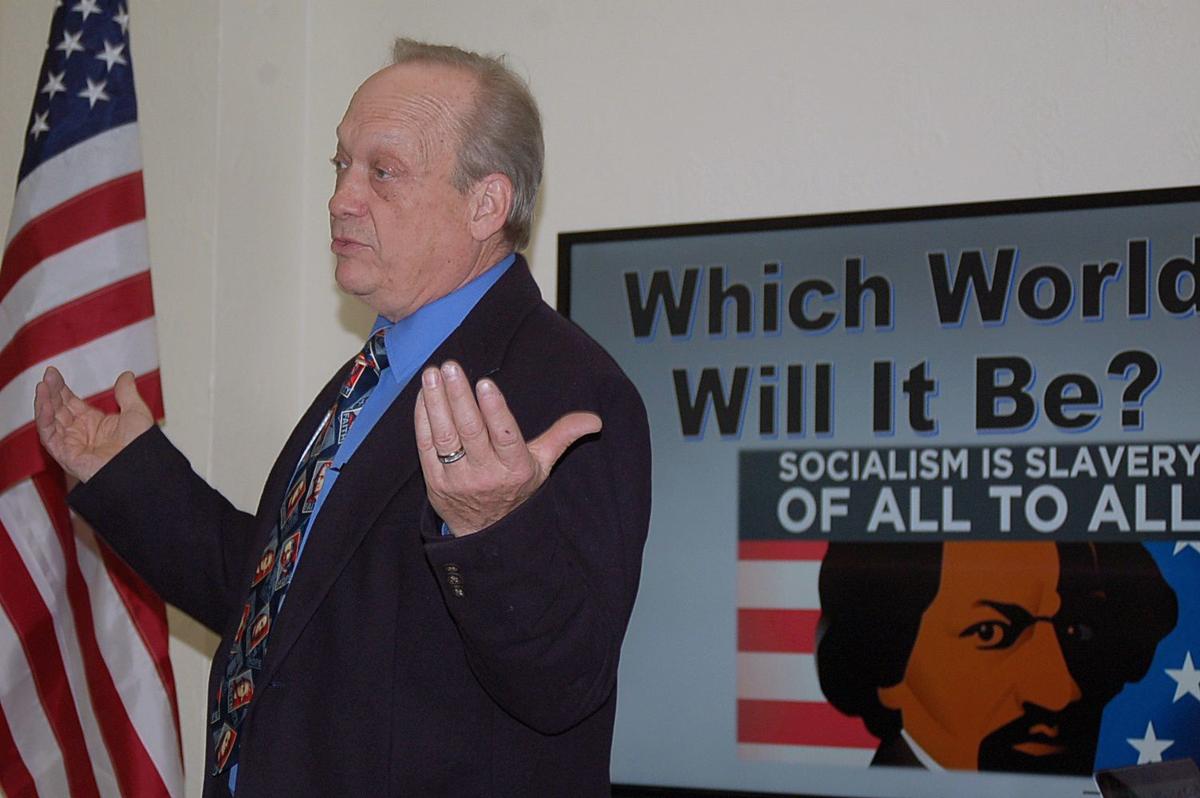 Dr. Kirt McKinlay of Blackfoot, president of the Bingham County Freedom First Society organization, gave some remarks as he introduced the speaker for Wednesday night's meeting.

Dr. Kirt McKinlay of Blackfoot, president of the Bingham County Freedom First Society organization, gave some remarks as he introduced the speaker for Wednesday night's meeting.

BLACKFOOT — The national president of the Freedom First Society advised Americans to be on their guard against socialism in an address before about 20 people in downtown Blackfoot Wednesday night.

“It comes down to some basics,” G. Vance Smith said in his opening remarks. “There are only two forces in the world — good and evil.”

He referred to Bible scripture, Isaiah 5:20, which says, “Woe unto them that call evil good, and good evil; that put darkness for light, and light for darkness; that put bitter for sweet, and sweet for bitter!”

He said Isaiah predicted that the things that happened in his day would happen in the future.

He said America faces two possibilities: freedom in the form of constitutional freedom, or slavery in global socialism.

”I believe the modern prophets have said the Constitution is divinely inspired,” Vance said. He fears that modern-day forces are seeking to change the Constitution through stealth-like, secretive methods.

”Good only happens in the open,” he added.

Vance said the founding fathers realized government had to be limited, and asked how much power the government should have.

The government should only protect constitutional rights, the rights of the American people, he added.

Vance showed a quote from George Washington, saying, “Government is like fire, a dangerous servant and a fearful master.”

”Fire can burn down that house,” he said of constitutional government.

Vance said we are seeing increasing attacks on family, morality, and religious freedom. In order to change things, he added, a revolution has to be done to create contention, which, he said, is the opposite of freedom.

”We’re pitting people against each other,” Vance commented. “Laws limit, they restrict. We keep getting more laws, so you need more government, which means more (government) control.

Vance showed a video of Hillary Clinton speaking to a world convention of women in which she said religious beliefs have to be changed.

Vance said people need to learn to identify socialist legislation and propaganda, using planks from the Communist Manifesto, including abolition of private property, a heavy progressive income tax, abolition of all rights of inheritance, a Central Bank in the form of the Federal Reserve, government control of communications and transportation, government ownership of factories and agriculture, and — lastly — government control of education.

He expressed concern that young people — students — are backing democratic socialists such as Bernie Sanders and Alexandria Ocasio-Cortez.

”People need to stand up to that,” Vance said.

He asked who is orchestrating a movement toward socialism, pointing to the Council on Foreign Relations, saying the CFR points toward one world government, a new world order.

He showed a slide which said that under President Donald Trump, there are 517 members of the CFR, although he doesn’t think Trump put them in place, adding that Donald Regan was a member of the CFR and served under President Reagan, but Vance said that Reagan hadn’t even met Regan before he was appointed.

”The government is run by the Council on Foreign Relations,” Vance said.

McKinlay said the United States was the first country to have a republic.

”That’s been hard to maintain,” he said. “Slowly, slowly people are trying to take that away.”

McKinlay said that today most Americans are unaware of growing evidence of collusion through socialism.

”We’ve had three years of accusations of collusion, but this is the real collusion.”

He also talked about the image groups like the Freedom First Society have as conspiracy theorist.

”I am a conspiracy knowledgeist, not a theorist,” McKinlay said. “Conspiracies always existed to fight against a divinely inspired Constitution.”