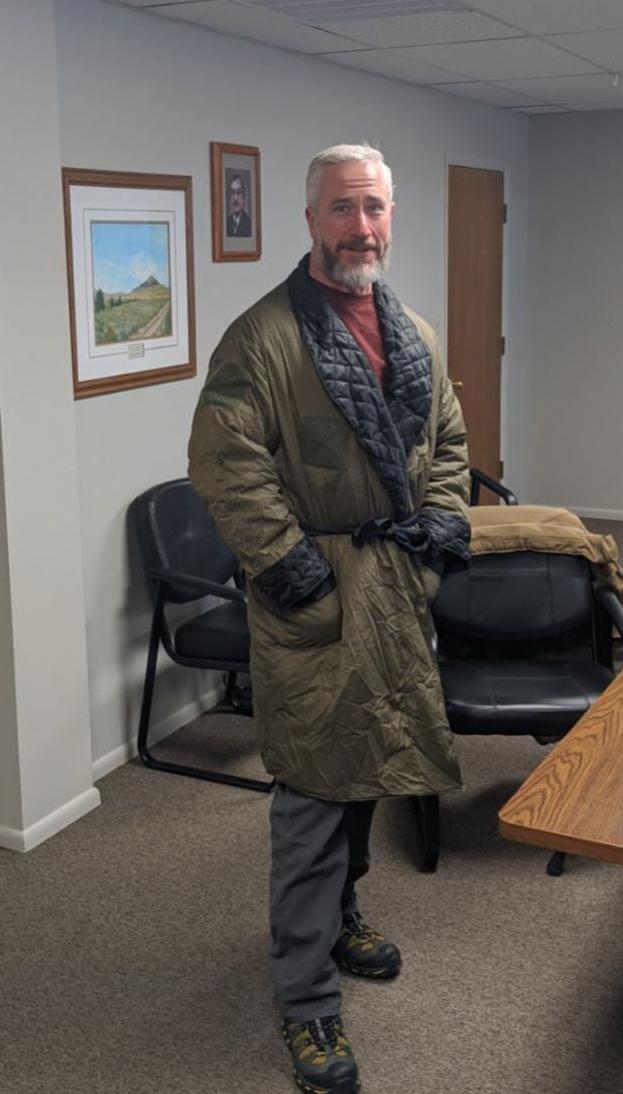 Patrick Quinn poses with one of the jackets that was manufactured at Dawn Enterprises. Quinn expressed gratitude for all of the hard work the staff put into making them. 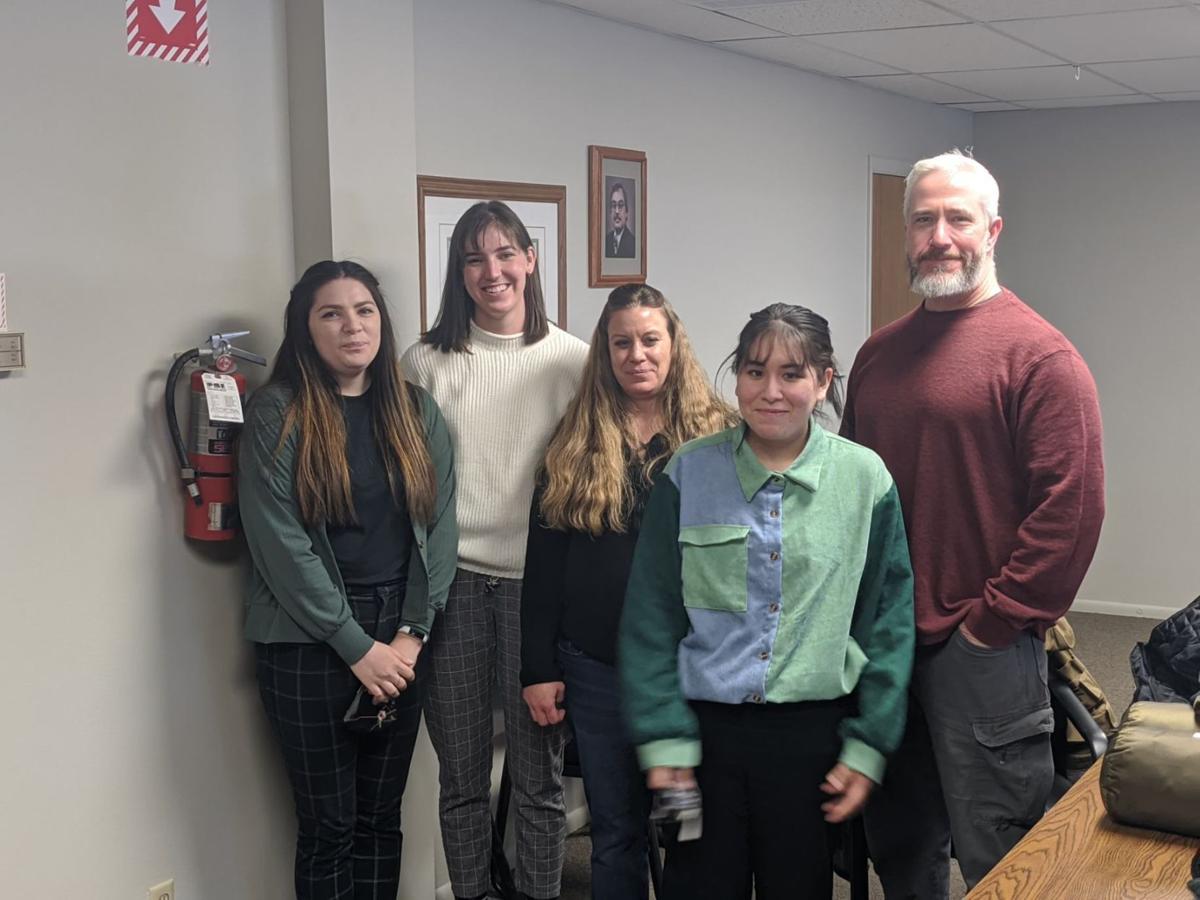 Members of the design team pose with Patrick Quinn (right) after the reveal of the first order placed with Dawn Enterprises. Next to Quinn is Nannie Park, Jill Sutton, and Coleen Mahar.

Patrick Quinn poses with one of the jackets that was manufactured at Dawn Enterprises. Quinn expressed gratitude for all of the hard work the staff put into making them.

Members of the design team pose with Patrick Quinn (right) after the reveal of the first order placed with Dawn Enterprises. Next to Quinn is Nannie Park, Jill Sutton, and Coleen Mahar.

BLACKFOOT – Patrick Quinn, a retired Army Ranger with multiple tours overseas under his belt, joined forces with Dawn Enterprises in efforts of continuing his lifelong service to those around him. Quinn was on the search for a partner company that could carry out production of his patented jackets that he specifically created to help his fellow brothers in arms that are going through tough times in veteran rehabilitation facilities and hospitals.

Quinn dedicated his life to serving his country, joining the military in 1987 and becoming an Army Ranger and later moved into Special Forces before medically retiring 25 years into his service. Quinn said that prior to his last tour in Afghanistan, his wife and he received word that she would be battling cancer on the home front while he battled enemies on war the front. The diagnosis was not what they had anticipated and she requested that he left his poncho liner with her because it was the only thing that kept her warm and reminded her of him while he was downrange. He jokingly explained that he had to rush out and purchase one for her because it would be winter in Afghanistan while he was deployed and it would essential for him over there. Blanket after blanket placed on her to keep her warm could not compete with that poncho liner and it sparked the idea of creating a leisure jacket out of the same material, but he never would get around to it until after his wife passed away.

His first attempt would be for a family friend that he knew through the service whose husband was in a rehabilitation for wounded veterans in Texas. Quinn went to visit this friend at his facility during one winter and he described it looking like a bunch of people closely huddled around a fire in efforts of keeping warm. They would do this in the colder months when they would go outside to smoke or talk with friends or just a change of scenery. Huddled together, chilled to the bone, these veterans were suffering from something completely preventable, Quinn thought, and as a man of action, he undertook his first jab at creating a better smoking jacket.

Quinn honed his sewing skills during and after his time in the service, being the go-to for members of his different units over the years and would take a job working in the private sector as a government contractor back in Afghanistan. This time, it was his job to use his manufacturing skills to fulfill any request from members of the service, including creating specialized tools for different missions — Quinn became a real-life McGyver for the armed forces.

Quinn used his building skills to create many different specialized tools for missions and touted his main claim to fame as his ability to make sure that something he built had more than one use. Quinn joked about the need to place everything in very specific steps so that when assembling his creations, whoever had to do so would be able to ensure that when they reached the final steps, it would come together.

Quinn spoke of one experience of when a young mechanical engineer worked alongside him and decided he did not need to follow Quinn’s instructions; the ruck sack he was constructing would not come together at the seams no matter how hard he pulled or yanked. Quinn laughed at him and told him, “Grab a seam ripper and start over. This time follow the instructions so that doesn’t happen again.” The experience in the service and private sector was the baseline for his new venture and he had a mission — create from scratch a smoking jacket that would keep his friend warm, no matter what.

With no pattern to follow, he began designing a jacket with things he felt would be either of higher quality or more comforting to someone who served. The cuffs were one of the most interesting parts that went to the drawing board on many different occasions, even after he partnered with Dawn Enterprises. Quinn originally designed the jacket to fit loosely around the shoulders with a robe-like tie at the middle as well as a buttoned on hood that was wide enough for large earphones for those who would like to listen to music no matter where they are. After nearly five days of trial and error, he completed his first prototype for his friend, and shipped it down to Texas. After allowing a little time to pass, he asked his friend for feedback on the jacket.

His friend spoke candidly, explaining that the jacket is great, but could still use more room in the shoulders. He continued, explaining that others in the facility would love to get one as well, asking for special orders and things, but Quinn decided he would stick with a one-style-for-all, rather than custom builds every time.

The next one he crafted was for a rather muscular, thick gentleman, and Quinn tried to build it big enough in the arms, but it would be at this point where the epiphany for the cuffs hit. Originally he had a piece of parachord sewn into the cuff that could be looped around a button on the upper part of the sleeve to ensure that if they were being worn, someone could pin the cuffs up to not be dragged through food, or any other substance. He said he had it come to him in the middle of the night, and immediately took the second gentleman’s jacket apart, designing a whole new cuff system that would include larger, looser sleeves that could be rolled back and buttoned halfway up the arm. It allowed for more comfort for the person wearing it, and did not rely on the parachord to keep the cuffs rolled up.

Quinn began building these jackets for those who had learned about them through word-of-mouth but soon realized he needed to work with a manufacturer for this endeavor. His search led him to looking at businesses all over the country, but everyone pressured him to look at having them constructed overseas, but he wanted them to be American-made and to continue serving the people here. He learned of a manufacturing company that had just opened a facility in Maine that had just did what he wanted to do, including manufacturing items here at “home.” He was soon directed to BYU-Idaho to share his plans with interns and students, it would be these students that directed him to Dawn Enterprises where he met with Nannie who was an intern designer at the time. Nannie has since been promoted to the lead on this project, spending countless hours with Quinn perfecting his product and explaining that there are better ways to build what he was crafting, and since has produced the first batch with a small team of five or six to clear 30 new jackets ranging from small to triple extra large.

Quinn will be releasing inventory on his website in the near future, but has not added this to his site at this point because he has not been able to keep any stock on the shelf because of how much people have raved about this product.

Quinn would explain how well the product works, boasting about taking part in a Swan Valley joint Search and Rescue training operation just a few weeks ago. It was 30 degrees outside with over a 20-mile-per-hour crosswind. His winter Tamarack gear was not keeping him warm during the briefings and training taking place at the base. He swapped it out for his own designed jacket and within minutes was toasty warm. Quinn explained that the reasoning for this is because of the way it is built — it was crafted to reflect body heat back at the person wearing and does not have quilted batting because the process of quilting actually destroys the air spacing that he received working in the private sector during his life. He noted that this experience has directed this chapter of life toward using his skills honed and his desire to help, protect, and serve that put him on this path.

Quinn and Dawn Enterprises have a bright future with these “smoking jackets,” and has all the capabilities of being a staple for veterans all across the U.S.