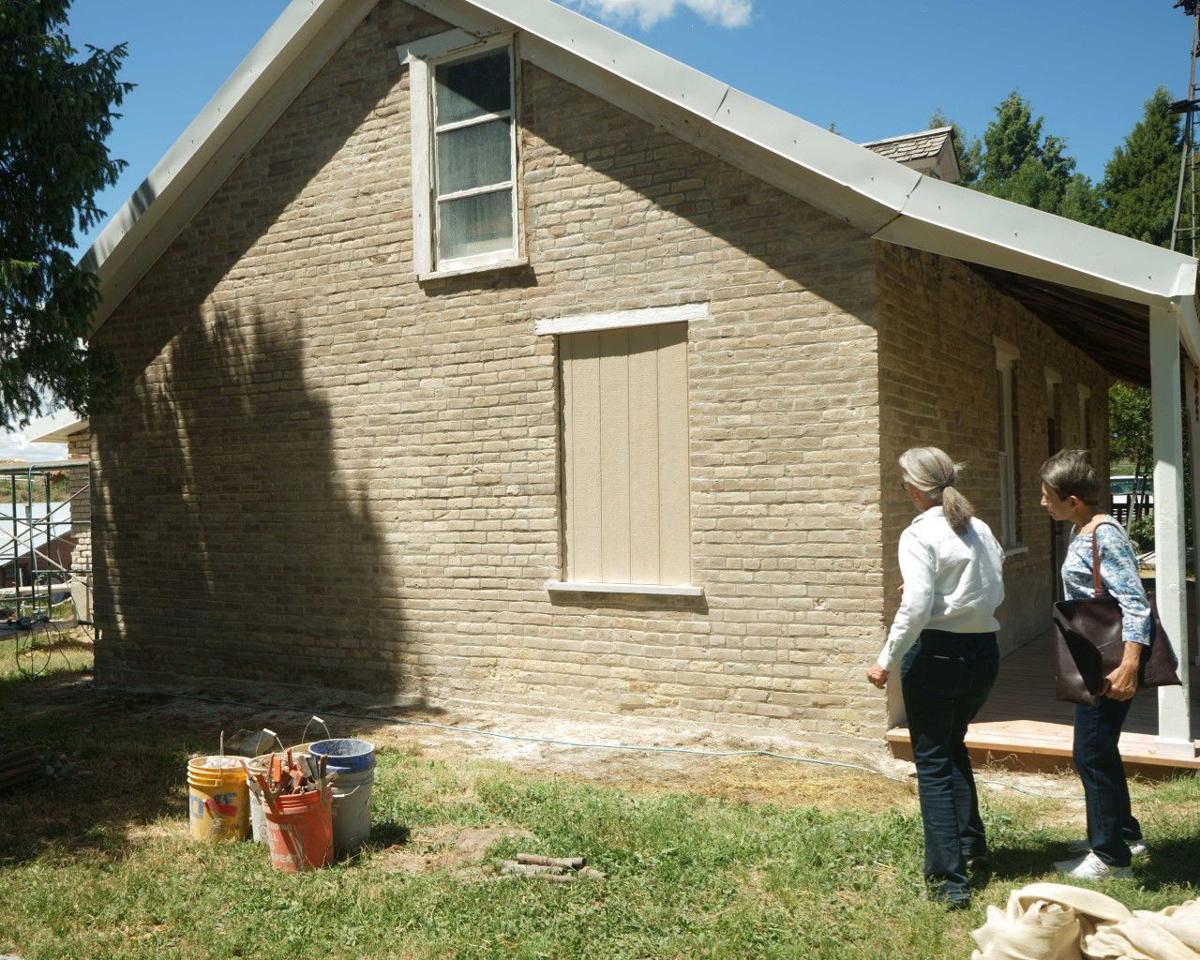 Wendy Pratt (left) shows a finished side of the Just house to Cheryl Connelly. 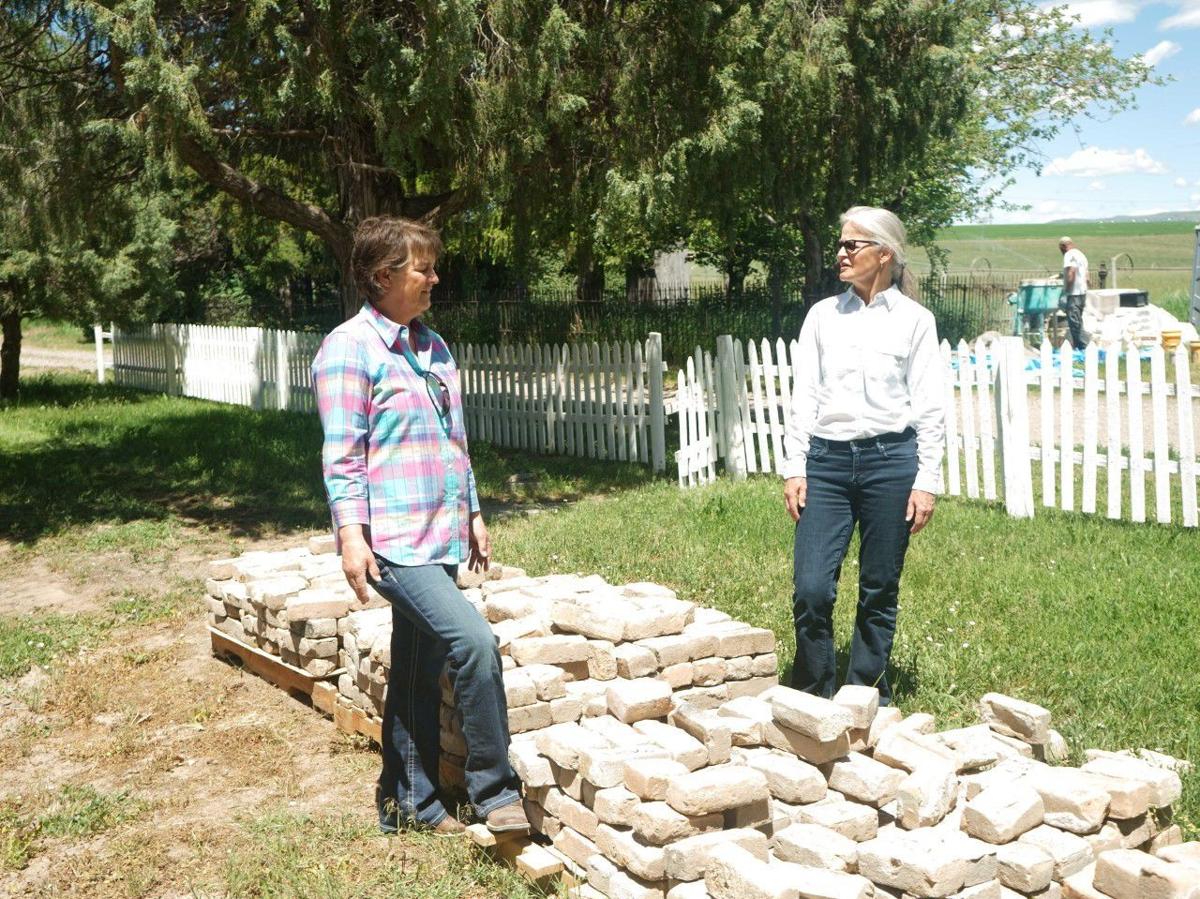 Wendy Pratt (left) shows a finished side of the Just house to Cheryl Connelly.

One of Bingham County’s oldest homes, dating to 1887, is receiving some needed restoration work. The home is owned by the Presto Preservation Association, a non-profit organization formed by family members to preserve the history of Nels and Emma Just.

Nels and Emma settled along the Blackfoot River in 1870. Their first home was a dugout in a sidehill along the river that lacked windows and used a heavy buffalo hide as a door. Within a year they built a small one-room log cabin on the site, then added to this structure over the next few years to accommodate a growing family.

By 1887, Nels had irrigated 300 acres and developed a cattle herd, providing the resources to build a larger home for Emma and the family. The new home was constructed of brick fired from clay obtained from the nearby river bed and lumber hauled from the surrounding mountains.

The house took two years to complete. Thousands of bricks were made two at a time in a small mold and fired on-site. Walls were three bricks thick providing an interior that was cool in summer and warm in winter. The home had two bedrooms and a sleeping loft, a large room used part-time as a bedroom and as the Presto post office in the late 1800s, and a large kitchen. The kitchen was built first and other rooms were added the second year.

The Just home was the Presto Post Office from 1890–1904, with Emma serving as postmistress. Their daughter Agnes, and her husband Robert Reid, later made this their home.

The Presto Preservation Association had the Just home inspected by a historical architect. The architect reported that uniform size and construction of the bricks indicated the house’s brick maker was an expert at his craft who likely learned his trade in England or from an English brick maker.

Sadly, time has taken a toll on the home’s exterior so renovations on the Just home started in 2017. Abstract Masonry Restoration in Salt Lake City is renovating the brick work. Together, masons Jerrod Webb and Leon Lucas have about 30 years’ experience with historical renovation. They said their biggest challenge in this kind of project involved working with existing building angles which were not always straight on old structures.

Another challenge was obtaining a supply of bricks to replace damaged bricks on the house. The replacement bricks had to be of similar size and quality. Fortunately, family members located a supply from a home west of Blackfoot which was built about the same time by fellow pioneers, Fred and Finetta Stevens. The Stevens home had been vacated and eventually demolished.

Funding for the renovations is being provided by Just descendants and matching grants from the Idaho Heritage Trust. The trust was founded in 1989; it focuses on “Preserving the historic fabric of Idaho for our state’s Bicentennial in 2090.” So far, the trust has funded more than 400 projects totaling over $3 million in grants and technical architectural, engineering, and conservation advice. Members of the trust arrived to inspect the renovation and meet with family members while I visited. Judy Mortimer, a board member from Idaho Falls, and Katherine Kirk, executive director of the trust, from Boise expressed their satisfaction with the project’s progress and Katherine stressed that this project helps attain her goal of having Idaho history celebrated and enjoyed by all.

The enthusiasm of family members Becky Davis, Wendy Pratt, Debbie Reid-Oleson, and Kathy Christiansen for the project was obvious and they stressed the strong family commitment to maintaining and restoring this local treasure. Family members indicated that at some point the old home will be open for public viewing, but plans for a public opening have not been finalized yet.