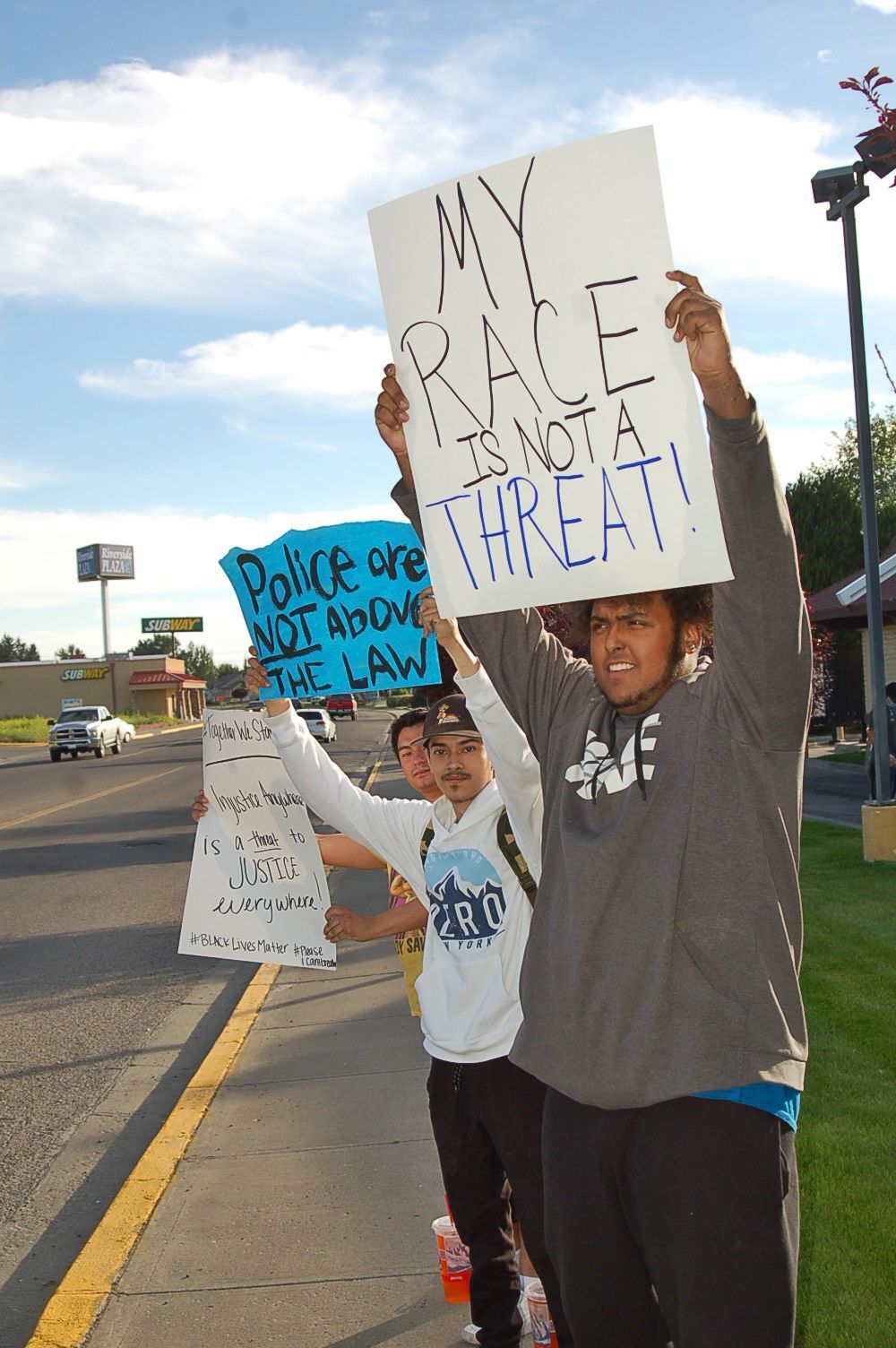 Xavier Njogu (foreground) holds up a sign during a protest held in Blackfoot Wednesday night.

Protesters lined up at the southwest corner of Bergener Boulevard and Parkway Drive Wednesday night. 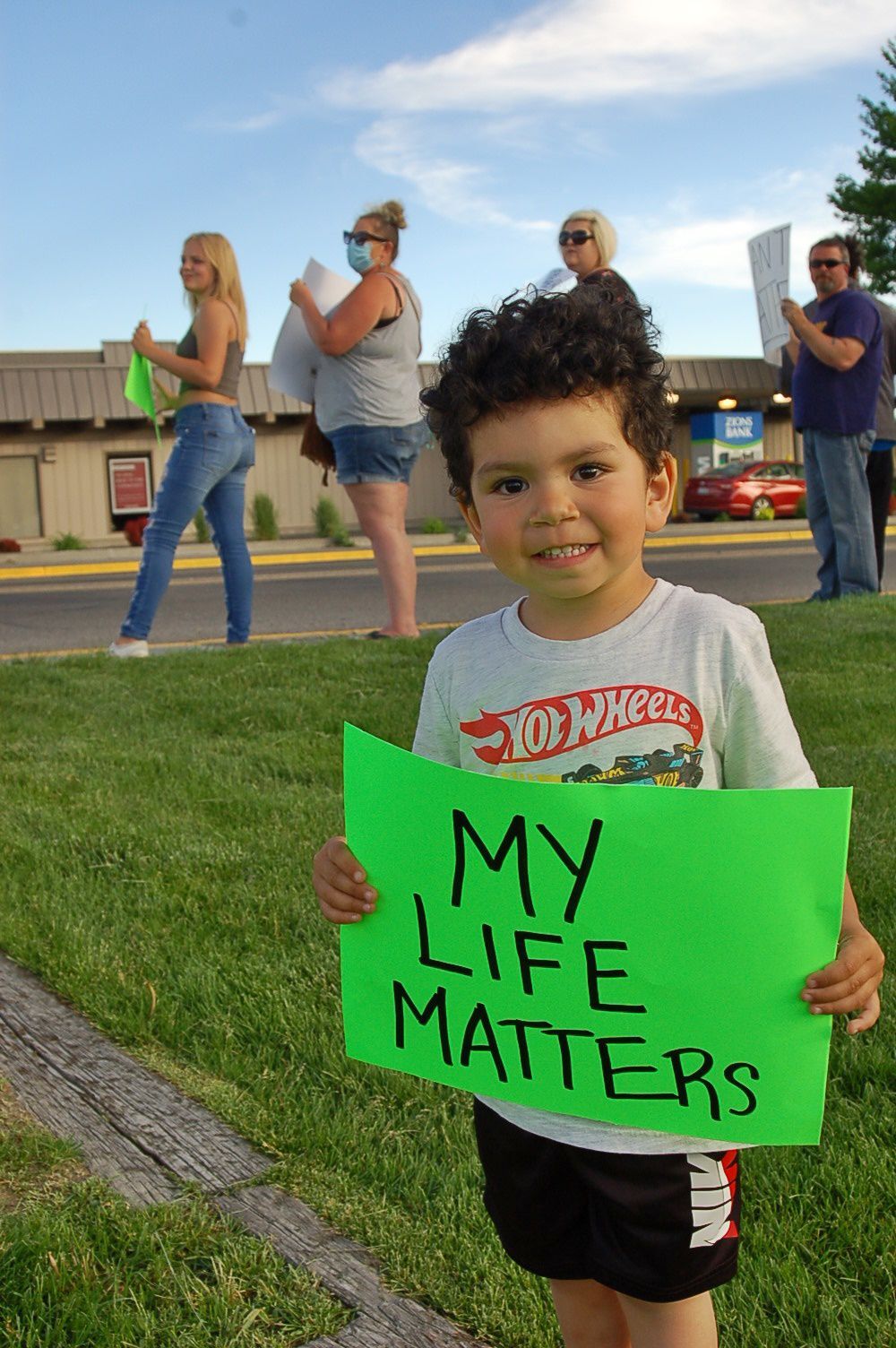 Alex, 3, makes a statement with a protest sign in Blackfoot Wednesday night.

Xavier Njogu (foreground) holds up a sign during a protest held in Blackfoot Wednesday night.

Protesters lined up at the southwest corner of Bergener Boulevard and Parkway Drive Wednesday night.

Alex, 3, makes a statement with a protest sign in Blackfoot Wednesday night.

BLACKFOOT — A group averaging over 20 people from the Blackfoot area gathered near the McDonald’s parking lot Wednesday night for a peaceful protest to make a statement about the death of George Floyd in Minneapolis and other race-related incidents.

Once the group was together, the protesters walked to the southwest corner of Bergener Boulevard and Parkway Drive to hold up signs. And it was a peaceful protest. Police officers and Bingham County Sheriff’s deputies were nearby, but they never made their presence known.

Blackfoot Police Chief Scott Gay said his department supports the rights of citizens to protest peacefully, but precautions were taken to make sure nothing got out of hand as has been the case around the country and the world with many protests turning into full-blown riots.

The group did encounter some traffic with people shouting “Go home!”, “Get a life!”, or flashing obscene gestures.

But for the most part, people driving by were hugely supportive of the protesters with the sound of honking horns filling the air, thumbs up gestures, waves of support, and people smiling and taking pictures.

Krystal Pulido and Ariel Bybee organized the protest just a few days before. Once word of the protest went up online, Pulido said, there was a big response.

“We didn’t want Blackfoot to be torn apart like we’ve seen in other cities, we wanted to keep it completely peaceful,” Bybee said.

Melanie Taylor was holding up a sign saying “My Son Matters,” referring to her son Xavier Njogu, an 18-year-old young black man and a graduate of Bingham Academy who also participated in the protest.

“We want to protect everyone in this situation,” Taylor said. “It’s a scary world these days. We need to stand up for our brothers and sisters.”

Randy Winters, who has an open carry permit, was nearby with a .45 caliber semi-automatic pistol strapped to his waist, not to pose a threat to anyone but to make sure there was no trouble, guarding the protesters more than anything.

“I just want to be here to help in keeping the peace,” Winters said. “There’s nothing wrong with a peaceful protest. I think in most cases in other cities where we see riots and violence, they’ve been having people come in from outside the communities stirring up trouble. But that won’t happen here, not in my town. I’m all for what these people are doing here. It’s a tragic situation, what happened in Minneapolis. That never should have happened.”