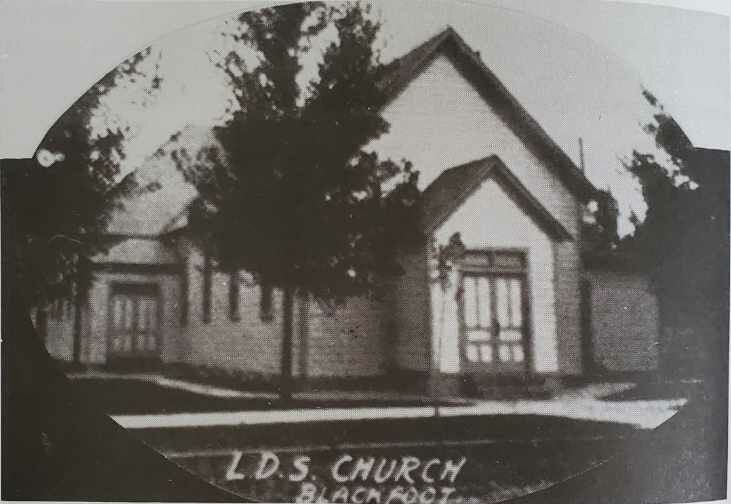 The Blackfoot First Ward building that burned down. 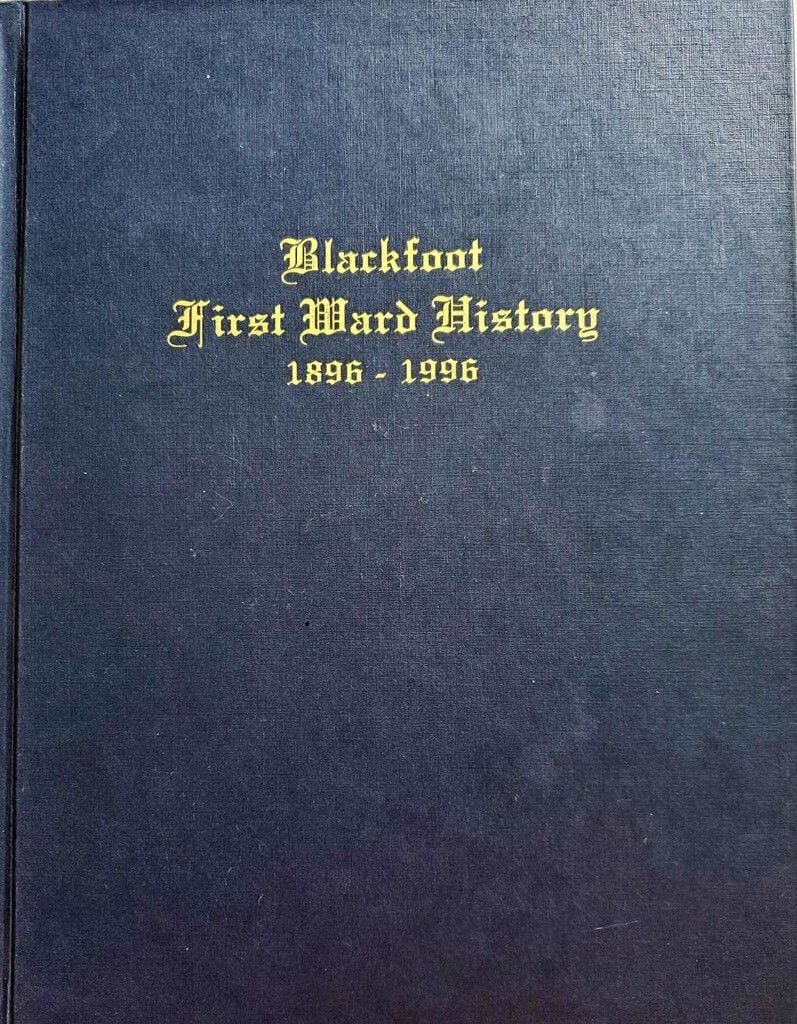 The cover of the First Ward history book. 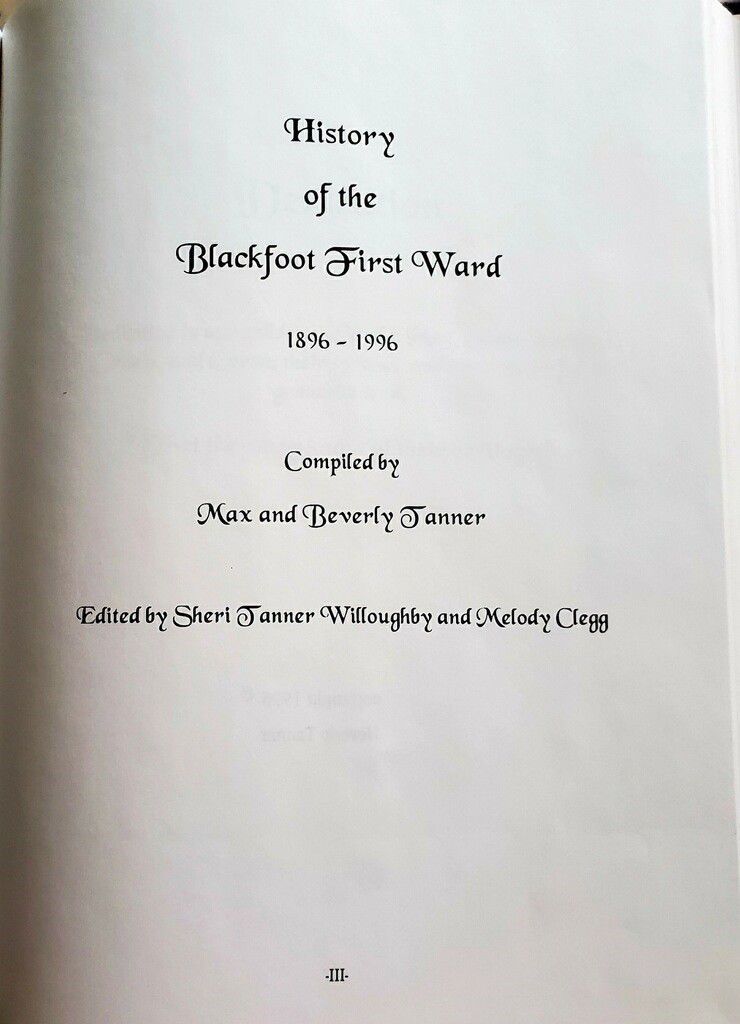 Inside the First Ward history book.

The Blackfoot First Ward building that burned down.

The cover of the First Ward history book.

Inside the First Ward history book.

BLACKFOOT — March 23, 1996, the members of the Blackfoot First Ward celebrated their 100th anniversary at Airport Park. This year marks the 124th anniversary of the First Ward.

It was Sunday, March 22, 1896, and stake conference was being held at Riverside. The following day, Edwin Watson became the first bishop of the First Ward.

From the original minutes of the First Ward, obtained from the Archives of the Church:

“Edwin Watson, (formerly of Hooperville, Utah) arrived in Blackfoot in November 1885 to seek a home for his family. On his arrival, he found Elisha Bingham living there with his family; and these were the only two Mormon families in Blackfoot for some time afterwards. They witnessed all the anti-Mormon doings. During the following years, a number of other Mormon families located at Blackfoot, among them were Golttfred Malm and his family.”

“On March 23, 1896, the Blackfoot First Ward was formed and a wonderful heritage began,” said former First Ward Bishop, Max Tanner (1975-1981 and 1991-1995). His remark can be found on page one of the 236-page history book about the First Ward compiled by Max and his wife, Beverly. It tells not only the history of the ward, but bishoprics, stake leadership, auxiliaries, parties, plays and programs, complete with a bibliography and index. Max continues, “Oft times we sit in church and seldom think of those who made it possible for us to worship in such pleasant surroundings.” In order to compile a comprehensive history, Max and Beverly made several trips to Salt Lake City to view records and obtain information from the archives of the LDS Church.

In the very early days, the First Ward meetings and Sunday School were held in private residences. For two years they met in the home of Elisha Bingham and later in the Edwin Watson home for three years. Edwin Watson was the first Bishop from 1896-1902.

The Blackfoot Branch held their meetings in 1895 in the upstairs room of the Cottrell Lumber Co., at 67 Southwest Main. The stairs leading to the room were on the outside of the building. The very first ward building was located on the corner of North Shilling and East Washington Streets. One cold, January morning, the custodian made a fire to warm the church and then went home to do chores. They said it was a sad day when the saints watched their church burn down; and Bishop Jepson was heard to exclaim, “Holy Smoke!”

Until a new building could be built, the tabernacle (now Hawker Funeral Home) was used for their meetings, and then a building across from where city hall is now which then was the Egli Funeral Home. It is told the priesthood meetings were held in the backroom sometimes even with a corpse. After that, the Progress Hall was rented. The hall was located above the former M&H Office Supply and Book Store.

It was early in April 1928 that bids and other projects were begun for a new church on the corner of Ash and Idaho Street. Finally, the building you see today was completed at the cost of $44,216.50 and was used for the first time May 5, 1929.

Heber J. Grant, then-presiding president of the Church of Jesus Christ of Latter-day Saints, came from Salt Lake City November 11, 1934, to dedicate the new First Ward Chapel. There were over 800 in attendance to hear his inspiring address.

After the church was built and dedicated, it continued to expand. A social hall was added in June 1937 and a $51,000 recreational hall was added June 1, 1955; and in late 1995, the congregation was able to once again meet in their building after a large renovation.

Along with helping Max compile the 1996 commemorative centennial book detailing the history of the Blackfoot First Ward of the Church of Jesus Christ of Latter-day Saints, Beverley was also busy creating her recipe book. I thought you readers may like to have a recipe from page 154:

“Max’s Pineapple Cookies” ( He makes these better than any one else):

Cream shortening and sugar together until light. Add eggs. Stir in pineapple and vanilla. Sift in dry ingredients and mix well. Drop on greased cookie sheet and bake at 375 degrees for 10-12 minutes.

Note: My very special thanks to Max and Beverley for their time and dedication to preserving this piece of Blackfoot history; and for their assistance with this story.