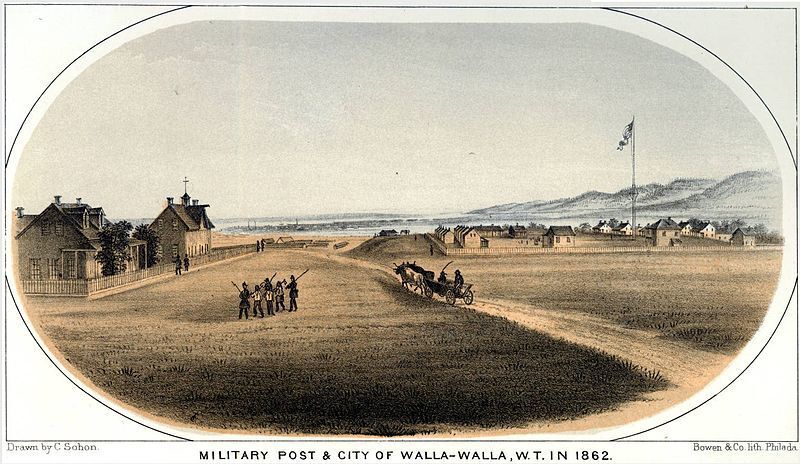 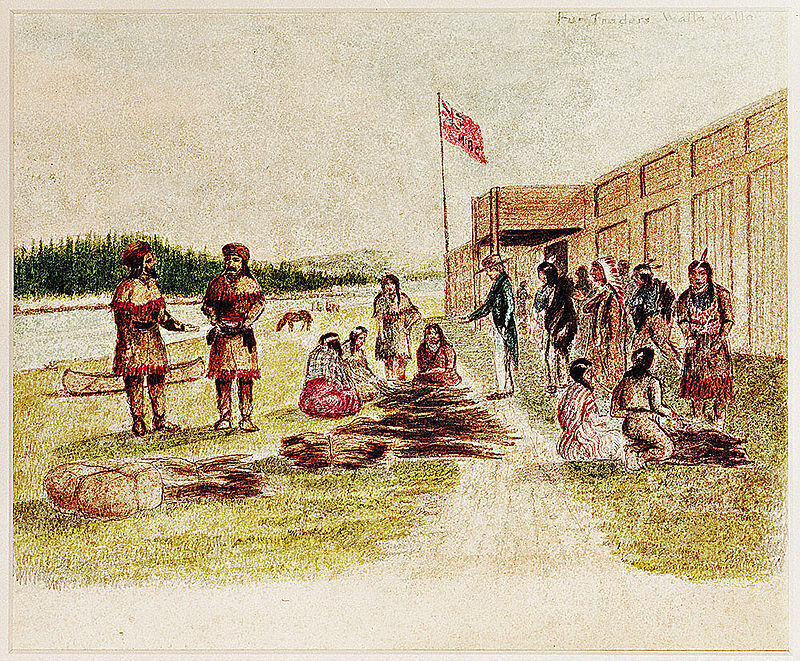 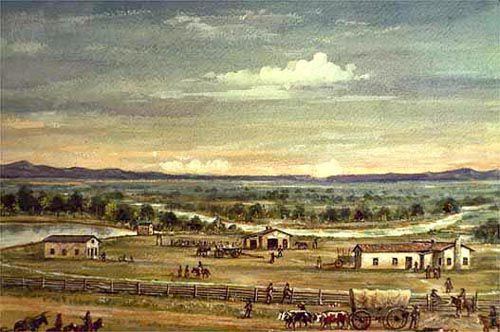 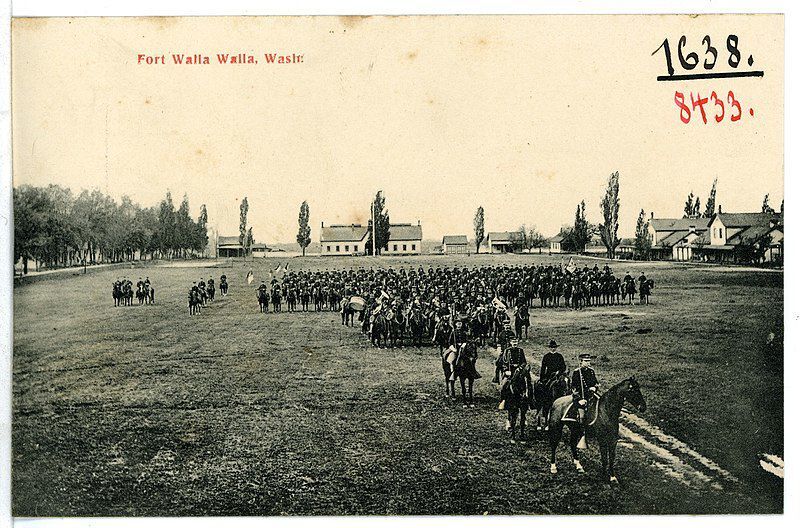 Upon leaving Fort Boise, the emigrants and travelers using the Oregon Trail had to cross the Snake River and then head west, before turning north by northwest and skirting the Blue Mountains until they found the best crossing point.

The Blue Mountains are very high and while the grade going up wasn’t also so steep, the way down on the other side was much steeper and more treacherous travel.

There was also the constant danger from bears and mountain lions and other dangerous wildlife that was much more plentiful than today. If it wasn’t one thing, it was another that could take the life of an emigrant or traveler trying to get to the ‘promised land’ still farther to the west.

The goal in the early days of the Oregon Trail was to reach Whitman’s Mission, which was just west of where present day Walla Walla, Washington sits.

A rest stop along the historic Oregon Trail, the Whitman Mission was the site of the 1847 massacre that played a key role in America’s westward expansion. What was initially a mission to Christianize American Indians soon became the center of a bloody clash of cultures between white settlers and American Indian tribes.

Located in Walla Walla, Washington, Whitman Mission National Historic Site preserves the site and tells the story of the events that took place on the Columbia Plateau from the moment the Whitmans established their mission in 1836, up to 1848, when after the massacre, Oregon became an official territory of the United States.Born September 4, 1802, in Rushville, New York, Marcus Whitman spent most of his childhood learning how to prepare wool for spinning, but he left behind his textile laboring days in 1809, when he moved to Massachusetts after his father’s death.

Around this time he lived with his uncle, and while receiving his education in Plainfield, the teenage Whitman first became interested in the religious revivalism during the Second Great Awakening. When he reached adulthood, Whitman left his uncle’s place in Massachusetts and returned to New York with aspirations of becoming a minister. Instead, upon learning of his family’s hesitation toward his chosen vocation, Whitman pursued and obtained his degree in medicine becoming a doctor in 1831.

Despite his new profession, Whitman continued to follow his religious aspirations, and in 1832, he moved to Wheeler, NY where he became a prominent member of the town’s Presbyterian Church.

By 1834, Whitman’s active membership in the church community captured the attention of Boston’s American Board of Commissioners of Foreign Missions (ABCFM), and in 1835, the board appointed him as a missionary doctor. The same year, the board sent him with Reverend Samuel Parker to the Oregon country to determine if prospects were good for their missions.

The board’s initial interest in Oregon stemmed from a fictional article published in 1833, which told the story of western American Indians who traveled to St. Louis in search of educators who would teach them about the white man’s “Book of Heaven,” or the Bible. After meeting some Indians on their journey, Whitman and Parker were convinced their missions would succeed, and while Parker stayed to explore the area, Whitman returned to New York to recruit workers and other missionaries, including his wife Narcissa.

In September 1836, Marcus and Narcissa Whitman reached the Columbia River, along with Reverend Henry Spalding and his wife Eliza. The Whitmans opened their mission in Waiilatpu to work with the Cayuse, and the Spaldings established their mission among the Nez Perce people of Lapwai.

Once settled, the missionaries learned the native tongue, and by 1839, Spalding published his book in the Nez Perce language. While the Whitman and Spalding missions expanded gradually, other missionaries reached the complex and established new stations.

During this time, three properties were erected, the blacksmith shop, gristmill, and a main large adobe house or mission house. Both missions establish large complexes; however, Whitman’s site was not as successful as Spalding’s mission.

Although the two mission sites were within close proximity, the cultural differences between the two American Indian tribes and the white settlers caused great friction. Whitman’s Cayuse Indians were not as receptive to the white man’s religion as Spalding’s Nez Perce converts. By 1842, having heard of the growing dissension between the Cayuse and Whitman’s mission, the Board ordered the closing of both the Waiilatpu and Lapwai stations.

Whitman, convinced his mission would succeed if provided more time, traveled to St. Louis, New York, Washington, D.C., and Boston to make his case and save his mission. In 1843, moved by his statement, the American Board of Foreign Missions offered the Whitman and Spalding missions a second chance and withdrew the original orders to close the missions. On his final return to Oregon during the Great Migration of 1843, Whitman led the first wagon train to the Columbia River on what would later become the historic Oregon Trail.

Although the mission sites of Waiilatpu and Lapwai were not directly on the Oregon Trail, numerous westward migrating groups stopped and sought shelter at these missions during times of illness and destitution. In 1844, the Whitmans adopted the seven Sager children who reached the mission after losing their parents during their journey west.

Although at the time the children were fortunate, their future seemed bleak as tensions between the Whitman mission and the Indians continued to grow. Cultural differences had already led to great misunderstandings, and when a measles epidemic spread throughout the Waiilatpu mission site — killing a greater number of Cayuse Indians than white settlers — a tragedy occurred.

On November 29, 1847, after seeing that Whitman’s medicine only helped the settler’s children and not their own, the Cayuse attacked the Waiilatpu mission and killed Marcus Whitman, his wife, and the Sager children who had not died from the measles. The Cayuse then captured some of the remaining survivors and held them hostage, while others managed to escape.

A month later, the Cayuse released the hostages after Peter Skene Ogden of the Hudson’s Bay Company offered a ransom. The hostages, including the Spaldings, reached Fort Walla Walla on January 8, 1848, and in the same year, survivor Joseph Meek traveled to Washington, D.C., to inform congress of the attacks. On behalf of the settlers, he petitioned the Federal Government to create the Territory of Oregon, and on August 14, 1848, President Polk — who was cousin by marriage of Joseph Meek — signed the bill making Oregon a legal territory of the United States.

Following the attacks on the Whitman Mission and the subsequent withdrawal of all the whites who lived there, all travelers on the Oregon Trails began stopping at Fort Walla Walla just to the east.

Begun in July 1818 under the direction of traders Donald MacKenzie and Alexander Ross, the fort was constructed by 95 NWC employees. The company officials secured daily provisions for the laborers by Trading with visiting Nez Perce. The surrounding area lacked a forest, so workers had to cut timber 100 miles away and send it down river to the planned fort site. Relations with the Nez Perces quickly deteriorated as construction continued, as Ross recalled.

“Soon after our landing the tribes began to muster rapidly; the multitudes which surrounded us became immense, and their movements alarming. They insisted on our paying for the timber we were collecting. They prohibited our hunting and fishing. They affixed an exorbitant price of their own to every article of trade, and they insulted any of the hands whom they met alone. Thus they resolved to keep us in their power, and withhold supplies until their conditions were granted.”

The NWC employees erected an enclosure to protect the work site. The remaining laborers were 38 Iroquois, 32 Kanaka (Hawaiians), and 25 French-Canadians. The company men started negotiations with Nez Perce elders to avert an outbreak of violence. The tribal leaders at first insisted that all members of their tribe be given gifts, though a less expansive settlement was adopted, ending “many anxious days and sleepless nights”. Ross soon became the first chief factor of the fort or post.

While traveling west with fellow members of the American Board of Commissioners for Foreign Missions, William H. Gray described the original fort’s appearance thus:

“Old Fort Wallawalla, in 1836, when the mission party arrived, was a tolerably substantial stockade, built of drift-wood taken from the Columbia River, of an oblong form, with two log bastions raised, one on the southwest corner, commanding the river-front and southern space beyond the stockade; the other bastion was on the northeast corner, commanding the north end, and east side of the fort. In each of these bastions were kept two small cannon, with a good supply of small-arms. These bastions were always well guarded when any danger was suspected from the Indians. The sage brush, willow and grease-wood had been cut and cleared away for a considerable distance around, to prevent any Indian getting near the fort without being discovered. Inside the stockade were the houses, store, and quarters for the men, with a space sufficiently large to corral about one hundred horses.”

It wasn’t long afterwards, that people were routinely stopping at Fort Walla Walla, before following the Columbia River downstream until they reached an area suitable for the building of large rafts and floated their way the rest of the journey to their promised land.

Up Next: The final destination of the emigrants and travelers as they reached Fort Willlamette and the Willamette Valley of Oregon.