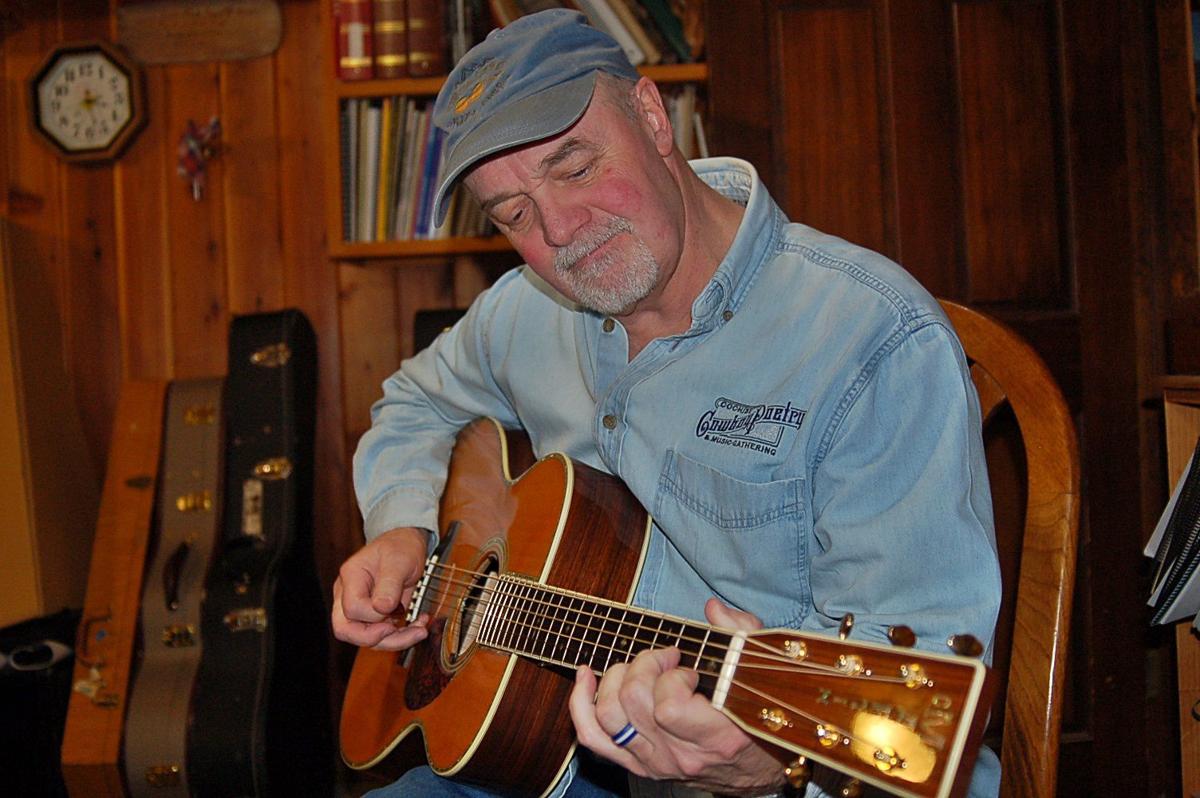 Vince Crofts of Firth plays a tune on a favorite Martin acoustic guitar. 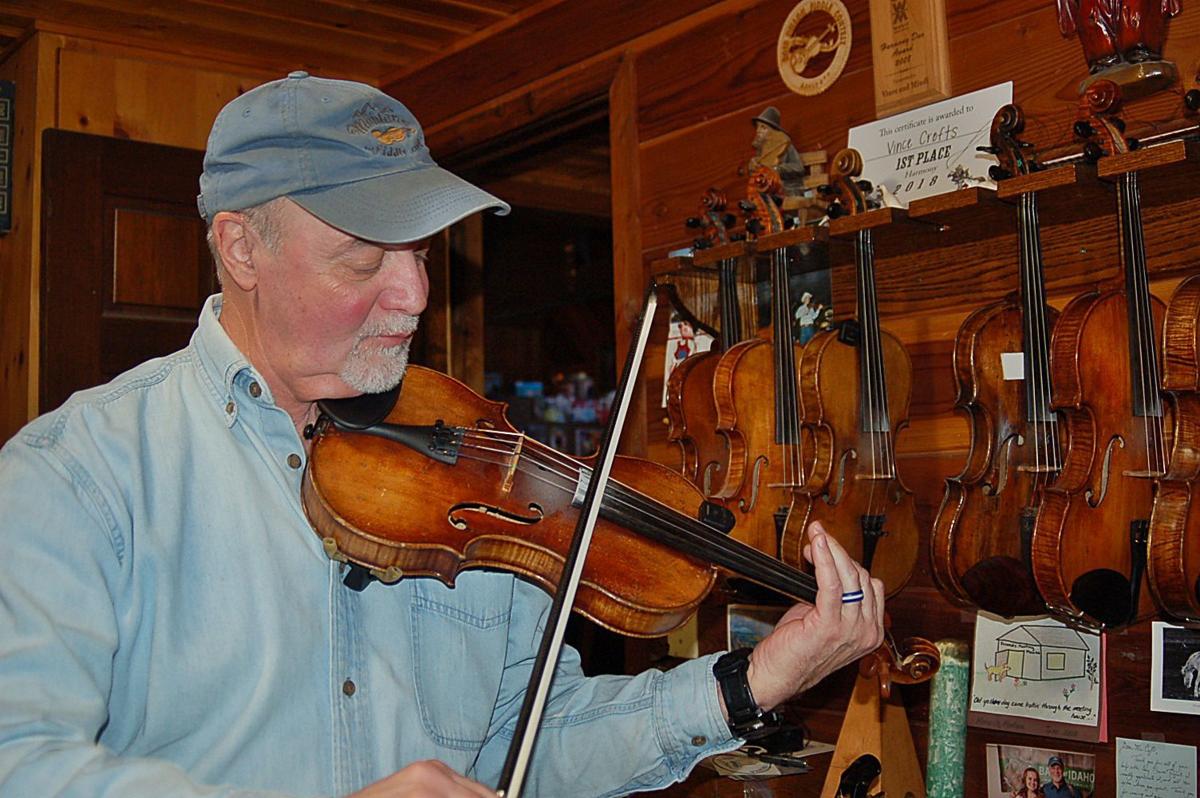 When Vince Crofts feels like playing a fiddle tune, he has a number of instruments to choose from.

Vince Crofts of Firth plays a tune on a favorite Martin acoustic guitar.

When Vince Crofts feels like playing a fiddle tune, he has a number of instruments to choose from.

FIRTH — Vince Crofts is at a point in his life where he does what he loves to do.

What he loves to do is play music. It’s always been an avocation for the 68-year-old Crofts. For the last 18 years or so, it’s been a main focus of his life.

It’s taken him to all kinds of places, allowed him to experience a lot of things musically.

He’s won awards with a Fellowship from the Idaho Commission on the Arts in 2009 and 2015, recognized for his work as an instrumentalist and a champion of traditional music. He spent 20 years as a member of the Shelley & Kelly Band of Jackson, Wyo., and is a founding member and fiddler with the old-time string band The Wild Coyotes.

He’s been a part of the duo Vince & Mindi with Firth native Mindi Reid Palmer, an accomplished musician herself on vocals, upright and electric bass, piano and guitar. They’ve played together for the past 15 years, sharing a mutual love and gift for music. The two of them have played at the Blackfoot Performing Arts Center for five straight years now counting Saturday night’s show with Rawhide n’ Rosin with Shelby Murdock on fiddle, Murdock’s third time at BPAC with the group.

He’s collaborated with his daughters, Colette Butler and Callie Moore, on a video of “Poor Wayfaring Stranger,” a video with over a million views on YouTube. He released a successful Christmas CD in November 2014 that charted on Billboard, “Sparrow in the Birch: A Crofts Family Christmas.” He’s released more CDs with Mindi, The Wild Coyotes, and The Idaho Songs Project.

The multi-instrumentalist (fiddle/guitar/mandolin/vocals) teaches some lessons out of his home in Firth and he’s taught Appalachian style fiddling at the Montana Fiddle Camp. He’s been a judge for the Teton Fiddle Contest, and when he hasn’t been judging there he’s won the No Hold Barred and Senior divisions of that contest.

It all shows what can be done when music is such a major part of life, and it’s definitely in Crofts’ blood.

His ancestors moved to the area in 1880. His father Afton was working for a mine in Patterson, and it was decided that some music was needed out there. Afton played the mandolin and saxophone. He taught Vince to play mandolin when he was eight years old.

When Vince was in the eighth grade, he learned to play electric guitar, and he went on to play more rock from bands like Creedence Clearwater Revival. In his 20s, he got his grandfather’s fiddle out and eventually decided he wasn’t as interested in rock and roll. He turned more to roots music.

”When I first started playing the fiddle, I thought ‘this is hard,’” Crofts said. “But I kept playing and it came along.”

From his 20s to his early 30s, he played in a bluegrass band called Knee Deep. The Shelley & Kelly band came along as his reputation as a player continued to grow.

Music hasn’t always been Crofts’ vocation as much as it is now. His family had the potato packing warehouse Crofts Inc., where Vince worked as a buyer, spending a lot of his time there from 1974-2002. He still keeps a hand in it there today.

But music has always been his passion.

”Music is one of the most pleasurable things you can do,” Crofts says. “The fellowship was quite a feather in my cap. It was an honor to receive that.

”I’m not that driven by making money any more. I do it more for the love of music.”

Crofts has a close musical bond with Mindi. When he first invited her to play along with him, he said, she was intimidated.

”But once she came in, from the minute she was here, it was a natural fit. Our tastes ran very similar. She’s a very accomplished musician, she understands music theory. As soon as we started playing, we’d spend hours working on the music, trying different things. She’s a valuable asset to any band. She’s a very self-confident woman.”

For all the things that Crofts himself has done with his music — playing on the same bill as the likes of the Nitty Gritty Dirt Band, Charlie Daniels, Vassar Clements, Mark O’Connor, Carole King, John McEuen, and Michael Martin Murphy just to name a few — he stays humble when it comes to his own abilities.

”One way to make up for being an adequate musician is having great material,” he says. “I will chase all over the world and do a gig. I wish I could work with (Mindi and Shelby) every week, they’re that good to work with. But they have their own responsibilities as well. Everyone who knows Shelby becomes a fan.”

This former rock-and-roller has settled into a style of music that’s right for him with the old-time style.

”I like the comfort of old-time music,” Crofts says. “I like the mood, I like the groove. There’s a particular spirit and mood to it I just love.”

At the same time, he knows there needs to be some variety in the shows to keep everyone entertained, different selections to keep people coming back for more year after year instead of settling into the same pattern every time, along with some favorites.

Above all, the musicians on the stage hope the fun that they have up there carries over to the audience.

”We want to show we’re having a good time,” Crofts says. “We want to be admired as musicians, but at the same time we want to bring some fun to it. Musicians have to fight to be entertaining, they have to fight with their ego and change things up a bit to keep the audience coming back for more.”

One thing Rawhide n’ Rosin has done each year at BPAC to keep things fresh has been to feature young local talent.

”You need to bring enough new stuff,” Crofts says. “We want to bring in new kids so they have a chance to shine. And we show some talented kids.”