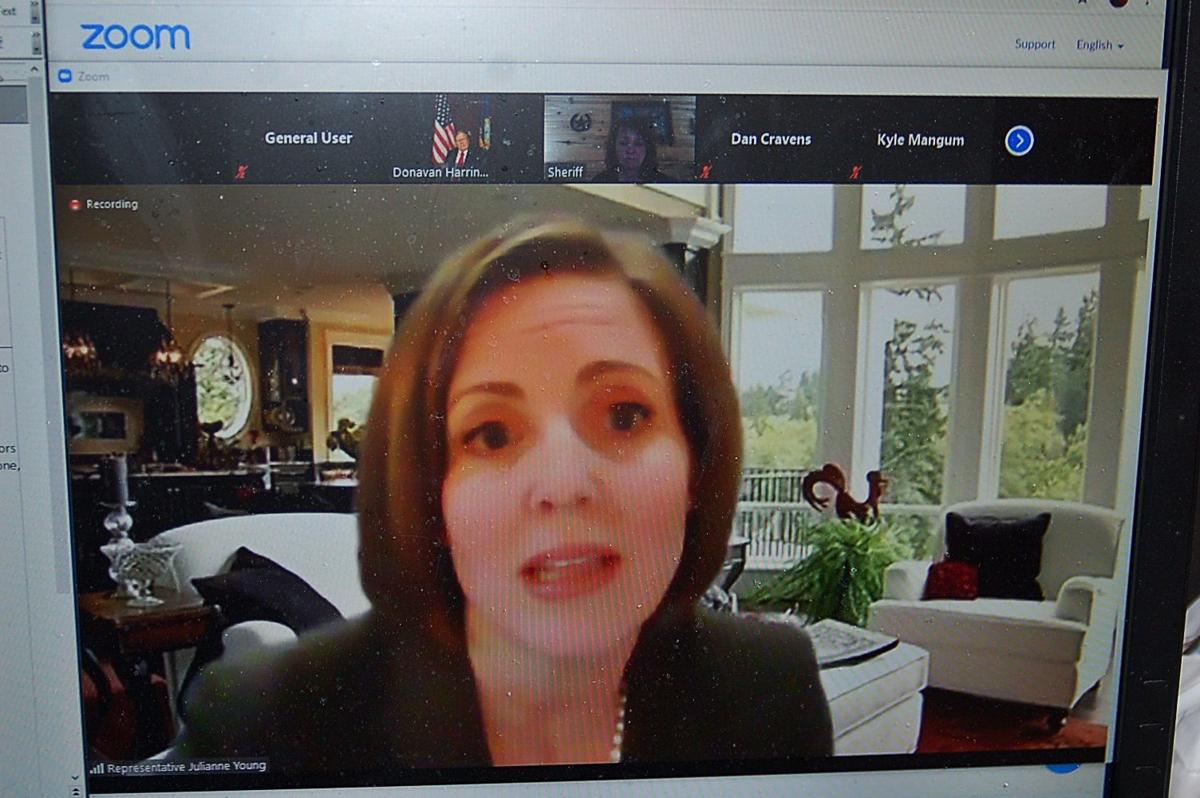 Rep. Julianne Young answers a question during a virtual candidate forum for House District 31B in April. 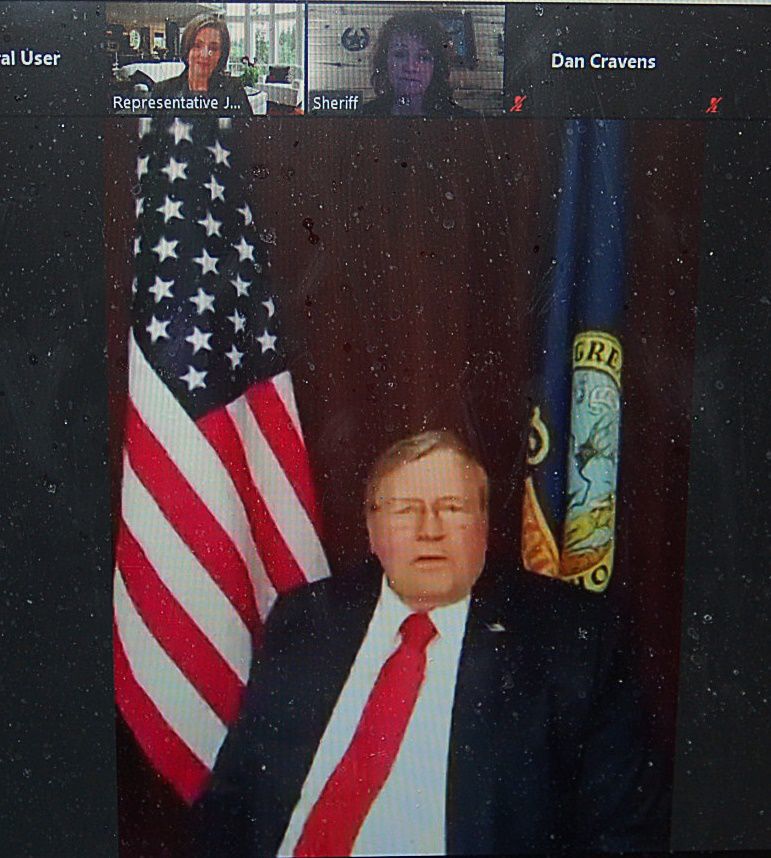 Challenger Donavan Harrington speaks online during a virtual candidate forum against Rep. Julianne Young in the race for her House District 31B seat Friday night.

Rep. Julianne Young answers a question during a virtual candidate forum for House District 31B in April.

Challenger Donavan Harrington speaks online during a virtual candidate forum against Rep. Julianne Young in the race for her House District 31B seat Friday night.

BLACKFOOT — State Rep. Julianne Young and challenger Donavan Harrington squared off in a virtual candidate forum Friday night in their race for the House District 31B seat. The forum was conducted online via Zoom, hosted by the Bingham County Republican Central Committee.

In their opening statements, Harrington said his time served as county commissioner was an an eye-opening experience that prepared him to represent constituents, while Young noted the two years she has served in the House as giving her a solid background.

Young said she has gone out of her way to contact constituents and local government representatives to see what their concerns are. Harrington said constituents would be his greatest influence.

The candidates were asked about House Bill 515, otherwise known as the Patient Act, which was meant to set time limits for medical providers to bill patients and sue them for nonpayment, and to limit attorney fees.

The bill’s supporters said it was meant to protect people from aggressive debt collection tactics and bills many times more than what they owed originally. Young voted against the measure in the House.

“It came with a good story but it didn’t reduce costs, it makes it more difficult to collect on debt,” Young said Friday. “If doctors can’t collect from those who owe on their bill and don’t make payment arrangements, they’ll get it from those other people who would cover the cost in some other way. When people don’t want to work out a way to pay the bill ... if it had done things to reduce the cost or would have been more fair to the providers, I would have voted for it.”

Harrington said the bill was never intended to lower the cost, that doctors need to be paid, but debt collectors had been allowed to assess certain established fees that were unfair. He said he had an employee who had a medical debt he was willing to help with by paying over the phone, and the collectors wouldn’t do it.

The Idaho Falls law firm of Smith, Driscoll and Associates was involved in doing legal work for the Idaho Falls medical debt collection company Medical Recovery Services, and Harrington bluntly asked Young if in her campaign funding the law firm effectively bought her vote, to which Young responded with an emphatic “no.”

The candidates were then asked, in light of the current stay-at-home order by Gov. Brad Little to battle COVID-19, whether their campaigns had been going door-to-door despite the order, ignoring the governor’s request.

Harrington said his campaign was not going door-to-door.

“We are sensitive to what the governor and president are trying to accomplish,” he said. “Our business had been affected by the stay-at-home order, but we are following the guidelines.”

Young’s online connection was lost when her turn came to answer the question, and when she came back on she responded, “We are not knocking on doors. The governor has been very clear we can go for a walk outdoors and we’ve been putting information on doors, but we have not had any cottage meetings, we have not met as a campaign team.”

The two were asked how they feel the governor has handled the stay-at-home order.

“This blanket quarantine is really an unprecedented thing in American history, it’s something we shouldn’t take lightly,” Young said.

Harrington said the governor is doing what he feels is best.

“I understand what they’re trying to accomplish,” he added. “I do not think it’s time to try and overtake the governor. It’s sad some of the things that are taking place over this.”

The candidates were asked whether they support those convicted of felony child abuse and domestic violence to own firearms. Harrington said he would need to study that issue more.

“There is a place to look at how to reinstate those rights, and right now we don’t have a good way once people have made mistakes to make retribution and get back to normal life,” Young responded.

On a question of what the most pressing issues are facing the upcoming legislature, Young talked about how the state deals with the economic fallout of the stay-at-home order and how the state uses taxpayer dollars.

“We’re going to have less tax dollars coming in, we need the ability to balance the budget,” Harrington answered. “This will be a train wreck (because of the economic impact of COVID-19), I’m almost certain.”

They were asked what actions they would take to be more connected to the people of the county.

“I’m a good listener, don’t forget me, my phone works,” Harrington said. “I want people to remember that I’m trying to represent all of Bingham County.”

“I’ve been in various roundtables for business and agriculture, they’ve given me some great connections,” Young said. “I am happy to take the time to listen.”

They were asked about House Bill 594 providing that certain notice shall be given for non-renewal of a lease or an increase in the amount of rent charged.

“We have housing issues, there’s not enough housing, we have fewer people that rent,” Young said. “I’m not opposed to 30 days notice, but contract laws should be balanced, and renters can get out with two weeks notice. We need to extend the same consideration to landlords.”

Harrington agreed that landlords and tenants should have the same rights, but he could see where there could be some challenges.

The candidates were asked which groups have donated to their campaigns and whether donations had come from outside sources. Harrington said he has received donations from major farm and business groups along with smaller donations from individuals. Young said she doesn’t know specifically where campaign dollars are coming from for her, that her secretary had that list, which brought a strong reaction of disbelief from Harrington.

There was a mention of the concern for Young’s vote on a property tax freeze.

“We literally have Idahoans leaving their homes that are paid for because they can’t pay the property taxes, and the freeze was kind of a last-ditch ‘Hail Mary,’” Young said. “I appreciate the concerns of local government, but we need to take care of our constitutional responsibilities.”

“They were tying the hands of local governments,” Harrington said. “The idea of putting a law in place that benefits Ada County and hurts places like Bingham County isn’t a good one.”

Young asked Harrington if he were to be elected as a state representative, if he had the opportunity to provide property tax relief, whether he had a sense of what he would do. Harrington said he would give relief for senior citizens, and from a legislative view take a look at how assessors look at property values on a year-to-year basis.

On the issue of HB 509 requiring certain facts on birth certificates and to provide for amendments to birth certificates regarding a person’s biological gender, the candidates were asked what families are under threat from transgender people.

“It’s something where you feel good about it at the end of the day for bringing it up, but there were more pressing issues,” Harrington said. “I would have voted in favor of that.”

“One of the roles of state government is to accurately record facts,” Young said. “If we’re going to record them and base legal decisions on them, those facts need to be accurate. If we can erase biological definitions of sex, we can erase a lot of things.”

The candidates were asked why citizens of the county should elect them.

“When I first ran, I felt there were important principles that needed to be represented,” Young said. “I’ve been standing up for family issues. Seven out of the nine (family-related) bills saw legislative action. I’ve built a strong coalition. It’s been a phenomenal amount of work but very rewarding.”

“I have been connected with the agricultural arm of the county, I’ve worked with manufacturing people, I’ve got those relationships and connections,” Harrington said. “I want to represent all of the people of Bingham County.

In his closing statement, Harrington said this is a different type of election that no one has seen before because of the restrictions posed by the COVID-19 pandemic, but he promised to represent all the people.

Young expressed frustration that conservative values were not well represented, but she has proactively represented and defended them.