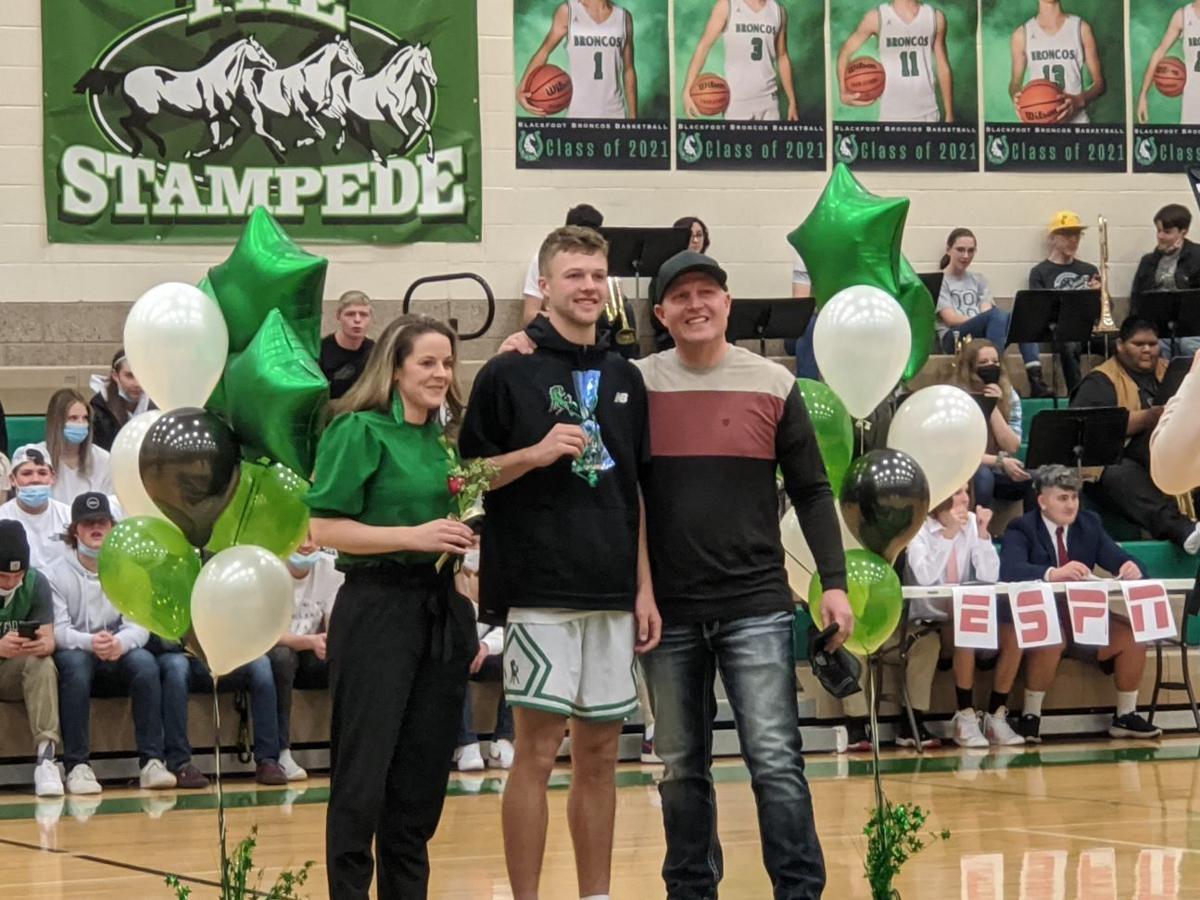 Jace Grimmett with his parents. 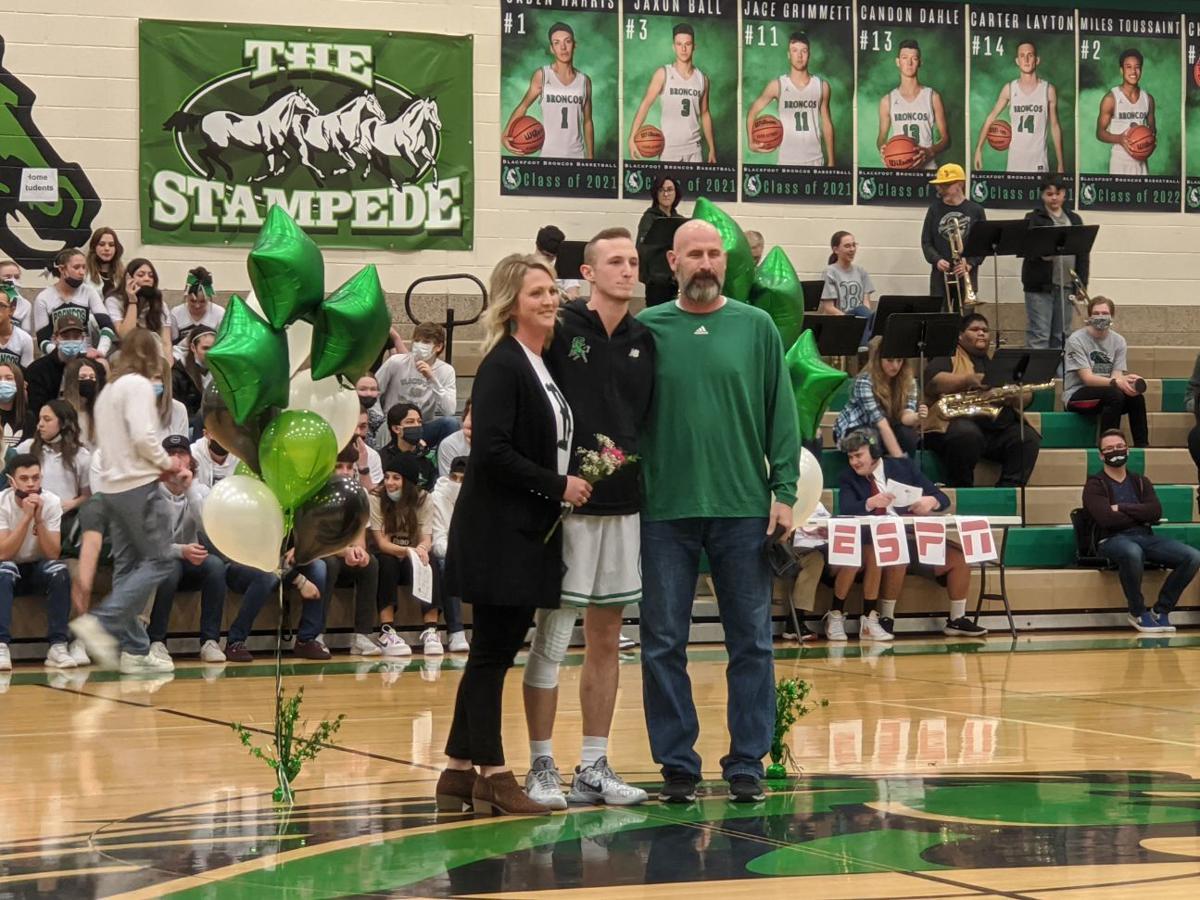 Carter Layton with his parents. 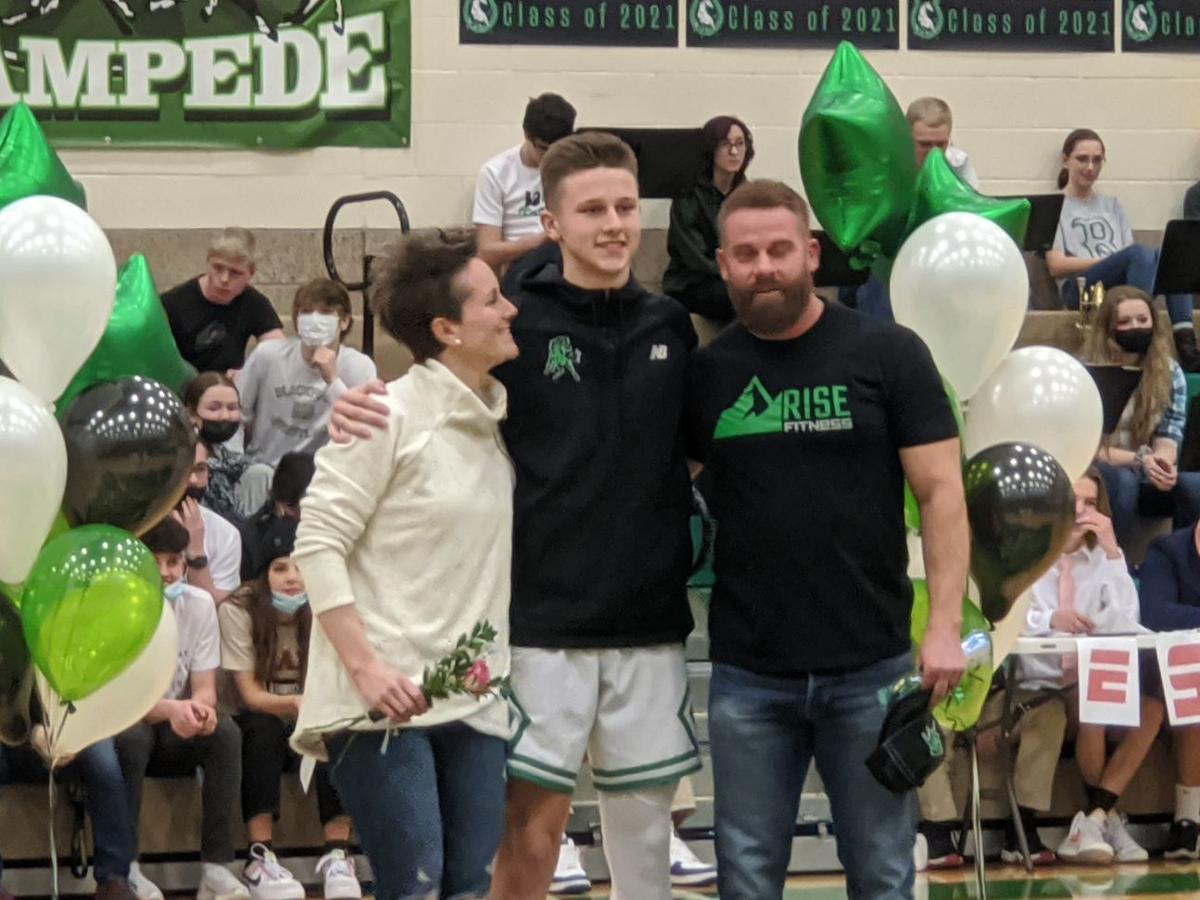 Jaxon Ball with his parents. 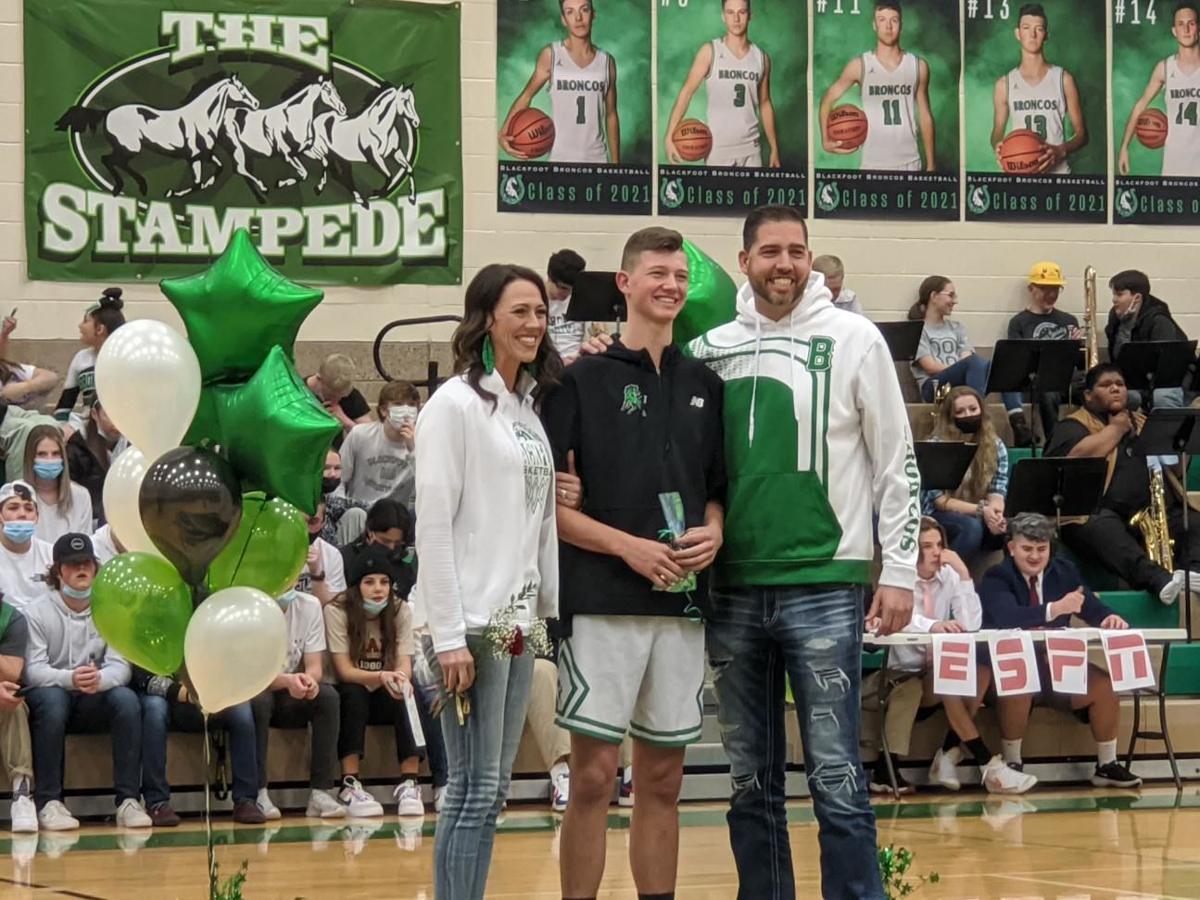 Candon Dahle and his parents. 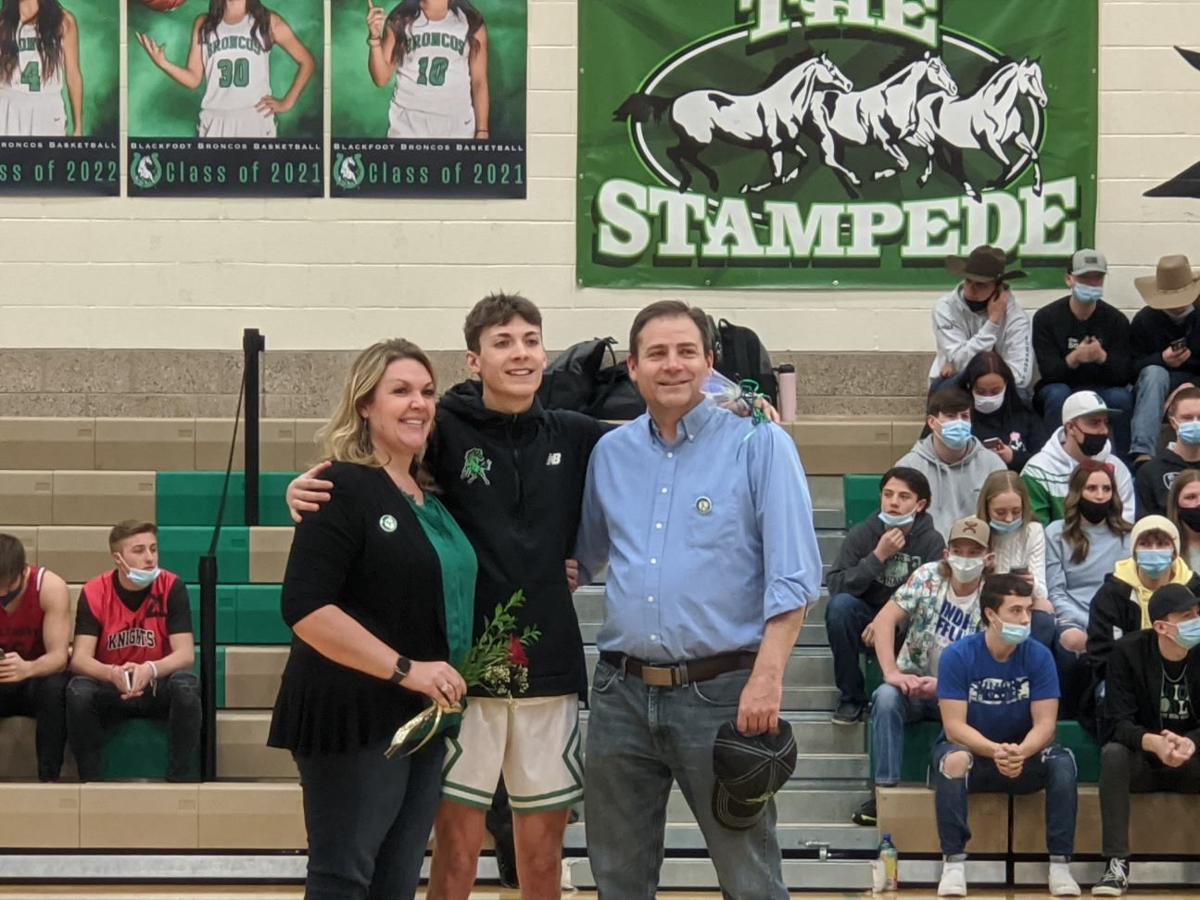 Jaden Harris and his parents. 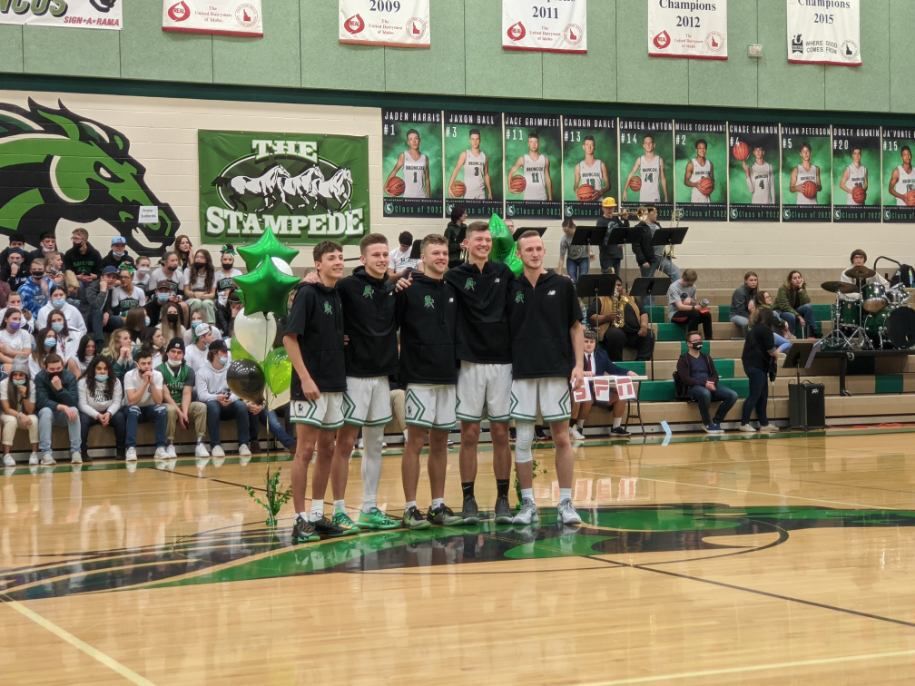 Jace Grimmett with his parents.

Carter Layton with his parents.

Jaxon Ball with his parents.

Candon Dahle and his parents.

Jaden Harris and his parents.

BLACKFOOT – It was senior night and it was Blackfoot’s last chance to take down the mighty Hillcrest Knights before the District 6, High Country Conference Tournament began play on Tuesday.

Blackfoot needed a good showing to create some buzz about themselves before they began play, with their sights on back-to-back district titles and a berth in the state boys’ basketball shampionships.

The homestanding Broncos did not get off to a good start, in fact, they were outscored in each of the first three quarters before they tried to make a run at the Knights, but it was far too late for that by the time the fourth quarter came around.

The first quarter, that has to this point in the year been one of Blackfoot’s better periods of play against most of their opponents, found them trailing by four points at 17-13.

Carter Layton, the Broncos’ best player, was definitely in play early on and Candon Dahle got off to a great start with a three ball, but the rest of the Broncos seemed to be floundering. It was only going to get worse for the Broncos as they could only muster a five-point second period against the Knights, who were strolling to a 30-18 first half lead.

It was a good thing the Broncos were able to honor their seniors before the game, because there weren’t any celebrations to be had after the first half of play.

Jaxon Ball, Candon Dahle, Jace Grimmett, Jaden Harris, and Carter Layton along with their parents were all honored for their contributions to the program over the past several years, including a trip to the state tournament a year ago.

In the second half, the Broncos were working hard at trying to get things back together, but the Knights were set on putting the game to bed as early as they possibly could.

While the play improved for Blackfoot, they just couldn’t cut into the Knights’ lead and the third period ended with the Knights adding to their lead by another two points with a 15-13 quarter and the game was all but finished as the lead had grown to 45-31 and 14 points is just a bit more than most teams would be able to overcome in only eight minutes of play.

That would be the case as the Broncos fought mightily to close the gap, but the 14-point differential was just too much to overcome. They did finish off the quarter with a five point advantage at 20-15, but it still left them some nine points short at 58-49, securing the top seed for Hillcrest and the third seed for Blackfoot.

Carter Layton did have a memorable senior night, banking home 22 points with his usual solid game under the basket, and Candon Dahle chipped in with 12 points.