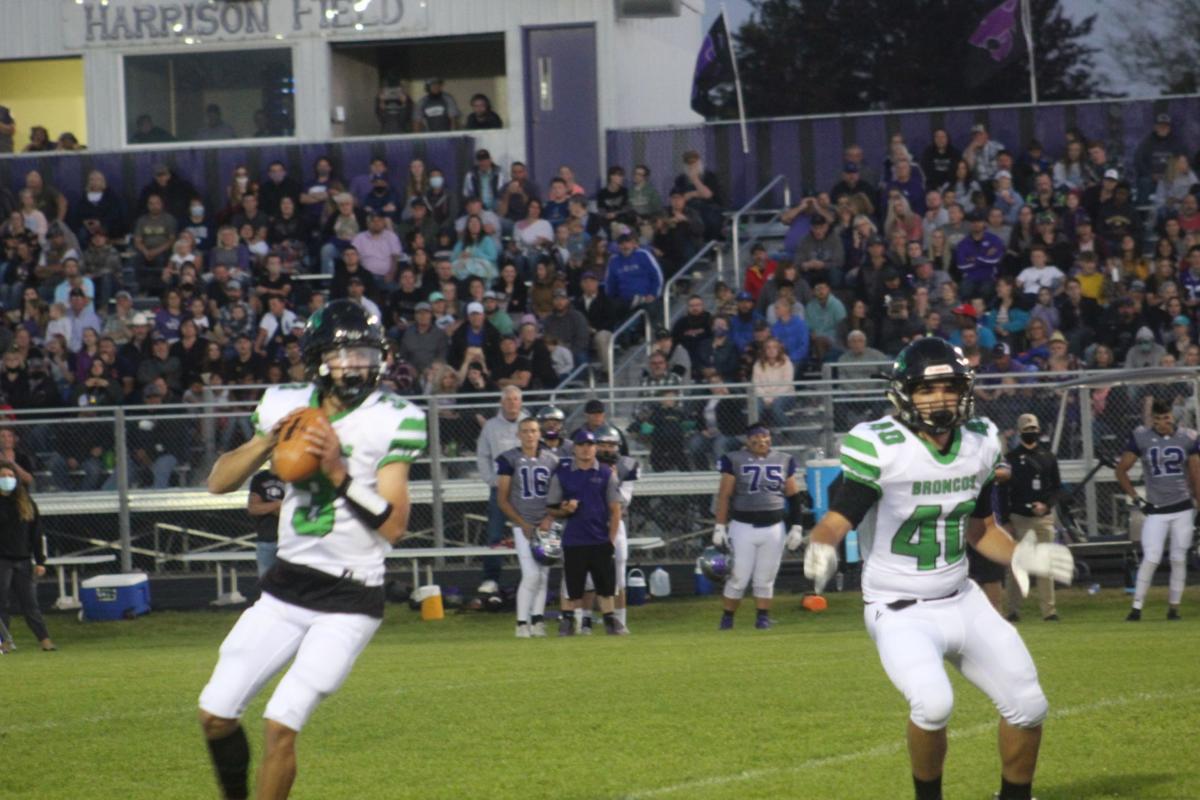 Jace Grimmett of Blackfoot looks for an open receiver. 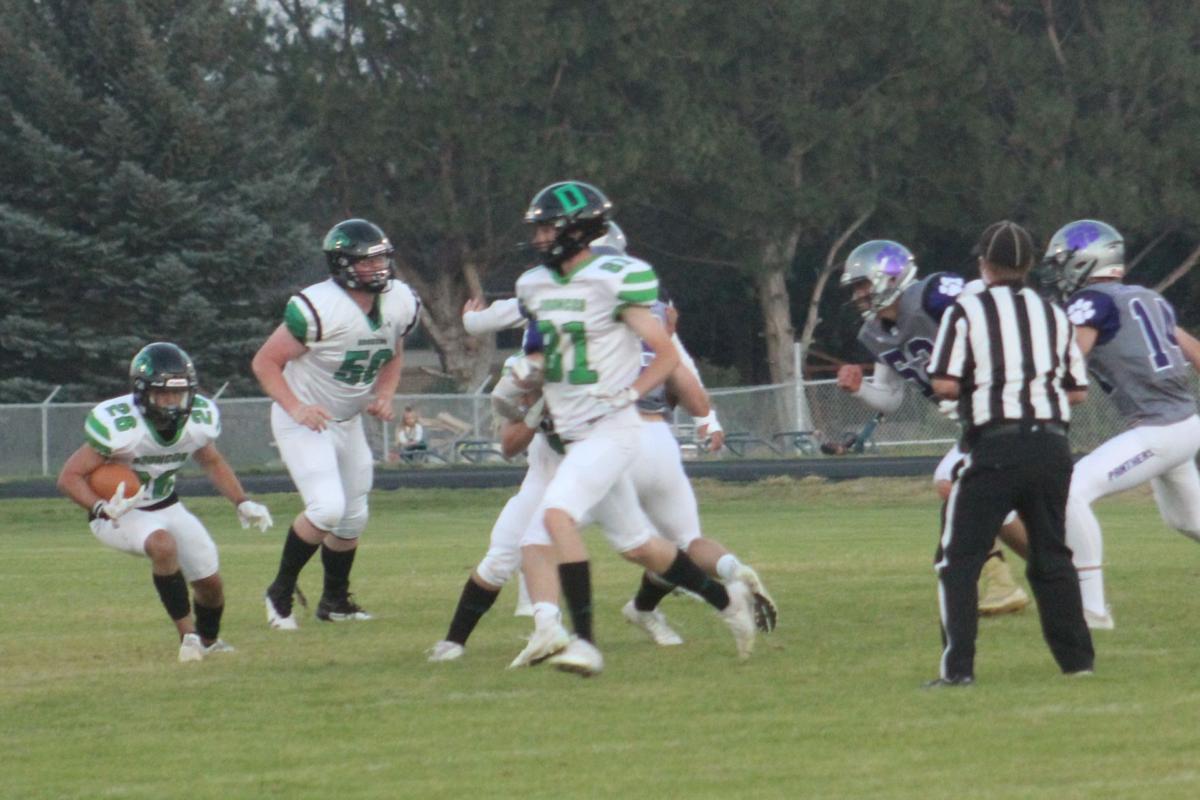 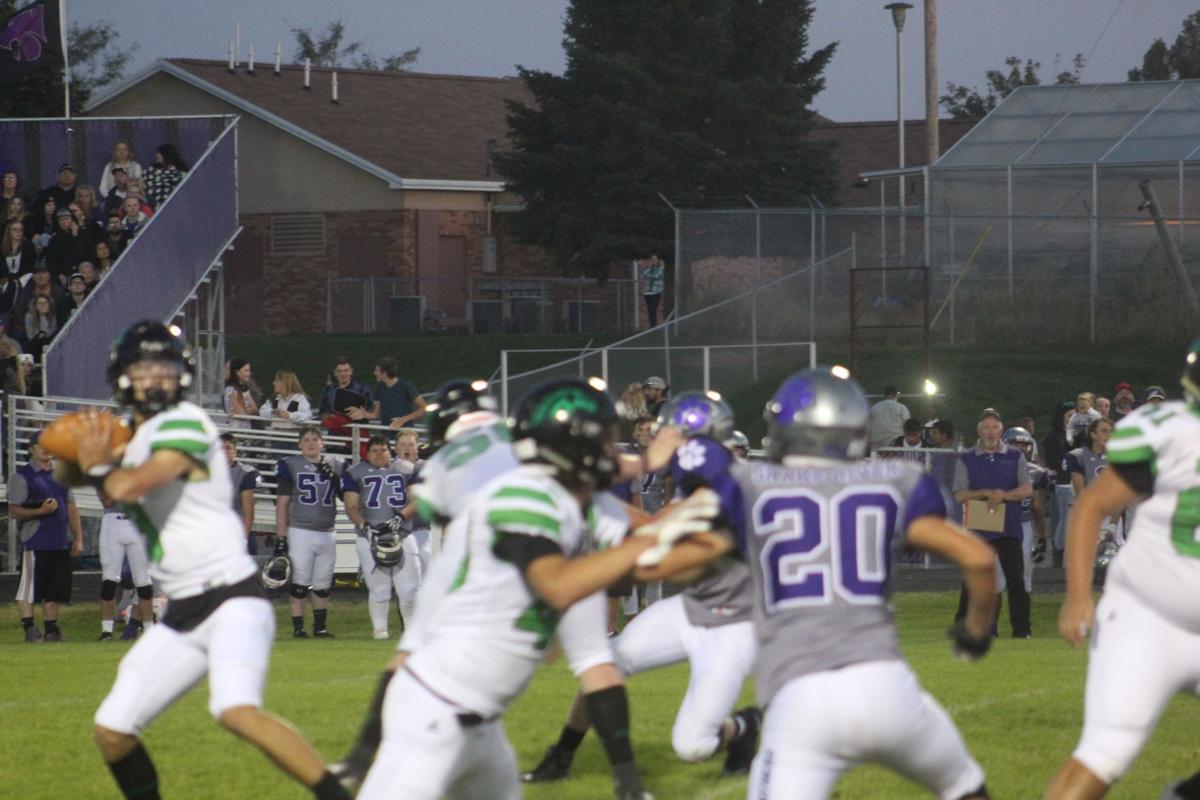 Jace Grimmett of Blackfoot looks for an open receiver.

THOMAS – As far as rivalry games go and fans are concerned, Friday night’s contest between the Blackfoot Broncos and the Snake River Panthers may have been everything that anyone wanted.

However, with the underlying tones of the game being what they were, there were bound to be a lot of fans who left the game unsatisfied with the outcome.

For months, football fans in the area have heard about the daunting Snake River defense, which returned a large number of starters from last year’s team, eight is the number that has been bantered about, but nobody had seen that defense in action and they had given up 30 points to Kimberly and 34 points in a shutout loss to the defending 2A champions in West Side and those are not the numbers of a top flight defense.

For Blackfoot, fans had been teased by the quick 2-0 start with wins over a pair of 5A opponents in Thunder Ridge and Idaho Falls. You at least thought that Blackfoot had a better than decent offense and the defense had shown they were the rallying kind of gang tackling group we had come to expect over the years.

The fans got a very good, close contest between these two Bingham County school and the result ended up being a 21-18 win for Blackfoot with the game ending when Blackfoot had a defensive stand on their own end of the field to seal the victory.

There were also way too many penalties in the game and way too many blatant calls that weren’t made by a less than stellar officiating crew that only exasperated the coaches on both sides of the field and probably frustrated the players as well.

There was plenty of arm waving from both the teams and coaches and the fans in the stands that hopefully sent a message to the officials that they need to step up their game as the season progresses and there are more very meaningful games down the road, some that will decide participants in the Real Dairy Shoot-Out come late October.

The game began with both teams trying to establish their offense and both defenses living up to their reputations as neither team could get a sustained drive going and the first quarter ending in a scoreless tie.

The second period started off with a few more fireworks.

Blackfoot got things started, setting up shop on the Panthers’ nine yard line and the Broncos promptly gave the ball to running back Teegan Thomas who powered his way to the end zone with the game’s first score. With the extra point added, it was suddenly 7-0 Blackfoot and we had a game on our hands.

That was especially evident when Snake River took the kickoff and drove the length of the field, mixing runs with passes and when the drive eventually stalled deep in Blackfoot territory, the Panthers settled for a short field goal with only 1:14 left in the first half, cutting the Blackfoot lead down to only 7-3.

The Broncos then used their own passing game, primarily quarterback Jace Grimmett connecting with wide receiver Carter Layton to drive the ball right back into Panther territory. With time running out, the combo hooked up again for a nine yard pass and catch for the touchdown with only six seconds remaining until intermission. With the PAT, the score was 14-3 in favor of Blackfoot.

Blackfoot would receive the second half kickoff and promptly drove the ball down the field, mixing their running game and passing game effectively. At one point, wide receiver/defensive back Jaxon Ball came to the sidelines screaming for the ball.

The coaching staff honored that request and on the very next play, the Broncos connected on a 28-yard pass play from Grimmett to Ball and with the extra point, the score was pushed to 21-3 and the Broncos seemingly had things going their way and the momentum was on their side.

The Broncos were able to recover an onside kick on the next play and were in business once again, with the ball in Panther territory and a chance to virtually seal the game with another score.

That didn’t happen as the Panthers made quick work on defense, forcing a turnover from the Broncos and the ball was headed the other way.

It may have taken most of the rest of the third quarter to get it done, but the Panthers finally punched the ball into the end zone on a four-yard run by senior Chandler Coombs and with the extra point, the game was suddenly 21-10 and Blackfoot was getting the ball back to start the final stanza of play.

This is where the Panther defense really stepped up and forced the issue, stopping the Broncos with a spirited set of plays and suddenly the passing game of Snake River was right back in action. A nice catch and run by Coombs got the Panthers right back into the game as he hauled in a 44-yard touchdown reception where he caught the ball with the Blackfoot defenders standing flat footed in the backfield and simply outran them to the end zone.

When quarterback Cole Gilbert took the ball around left end for the two-point conversion, the Panthers cut the lead to just three points at 21-18.

There were still seven minutes remaining, so the Broncos had the opportunity to get another score and put the game out of reach, but that didn’t happen because by now, the Panther defense was smelling blood and they stepped up once again, corralling the Broncos and forcing a punt, setting Snake River up with the chance to get the game-winning score and run the remaining clock out at the same time.

The Panthers started with the ball in their own territory and began working the ball downfield, using both run and pass until they were fairly deep into Blackfoot territory with less than a minute left.

The Broncos held, forcing the ball over on downs and with only 15 seconds remaining, the clock wound down to the final horn with the Broncos holding on by the final of 21-18, but they knew they had been in a tough, tight ball game with a very intense and game defense, much as they will see this coming week with Skyline coming to town for a Friday night contest with first kick at 7 p.m. They had better be ready for this one because you can count on Skyline being ready, especially after a loss to Rigby by the final of 47-22, the Grizzlies’ first loss of the year and the top-ranked team in 4A will be looking for redemption in a hurry.

For Snake River, it is back to the drawing board in search of their first win of 2020, but the defense has to have the team in good spirits with South Fremont coming to Snake River for their Friday night contest also starting at 7 p.m.