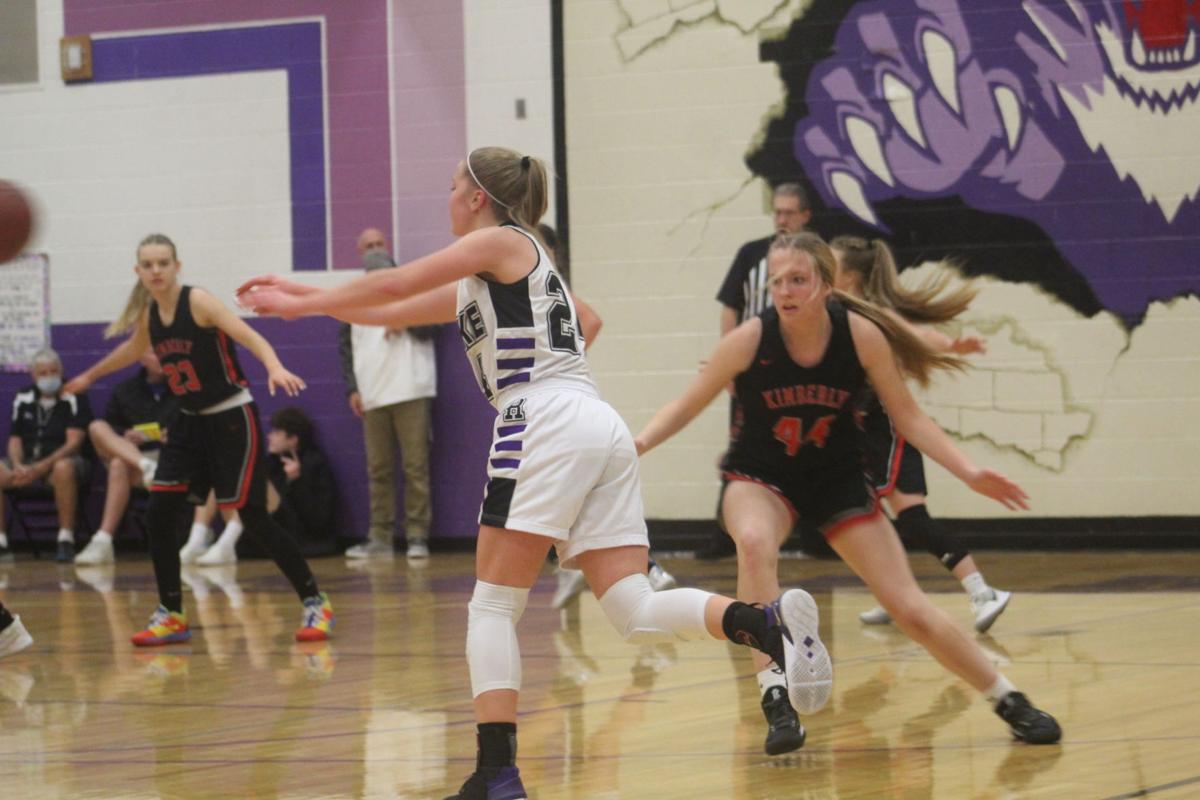 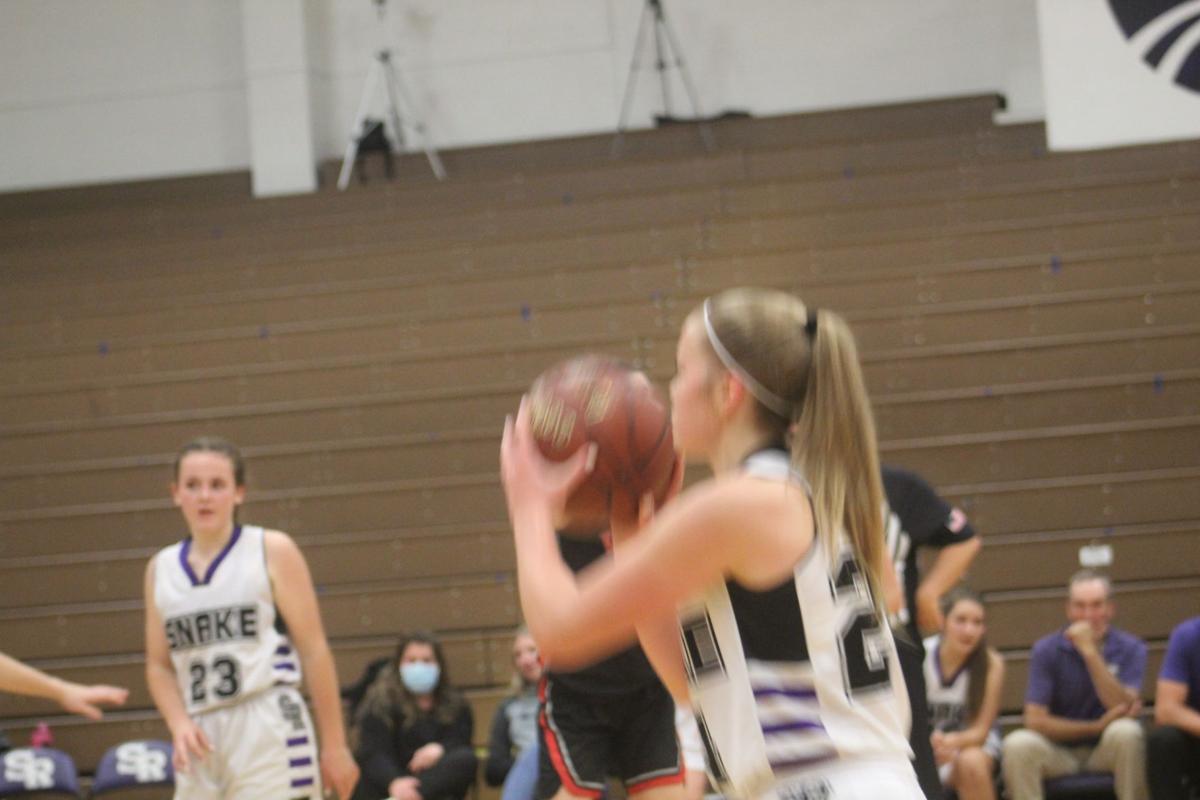 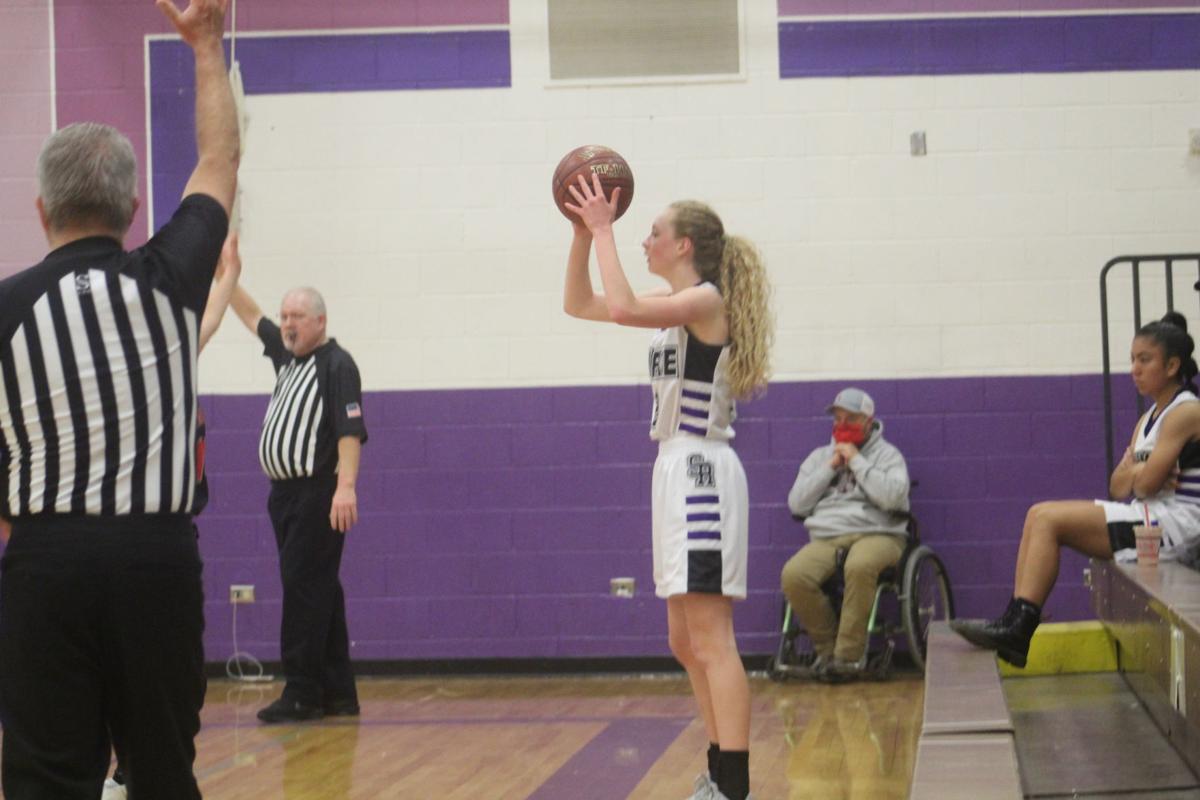 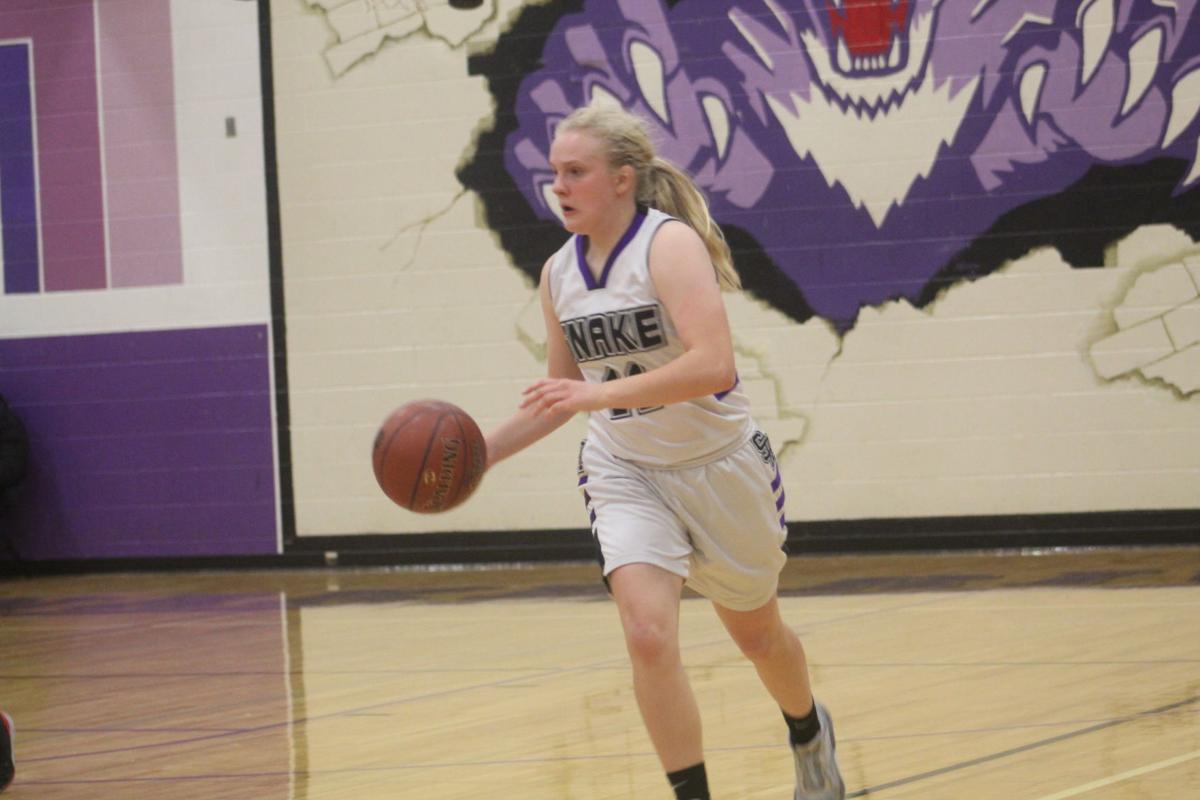 Caselle Howell brings the ball up the floor. 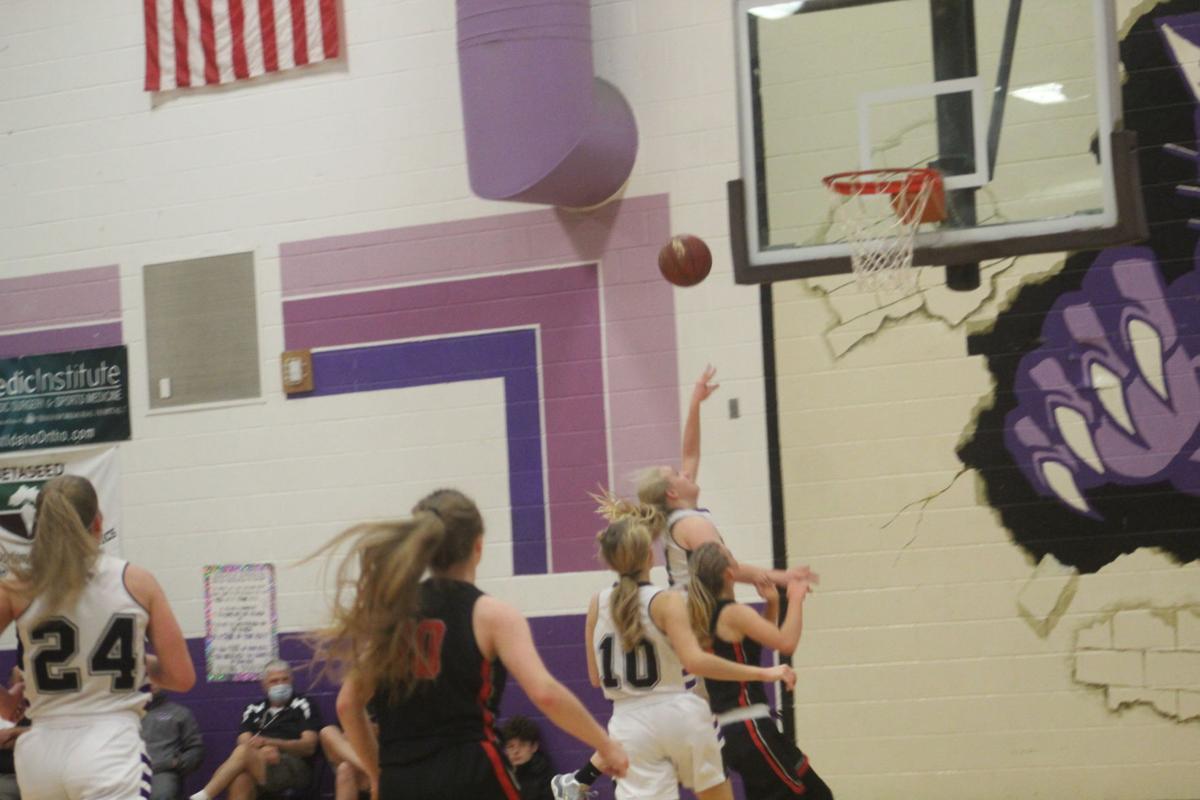 Caselle Howell goes up high for a shot against Kimberly. 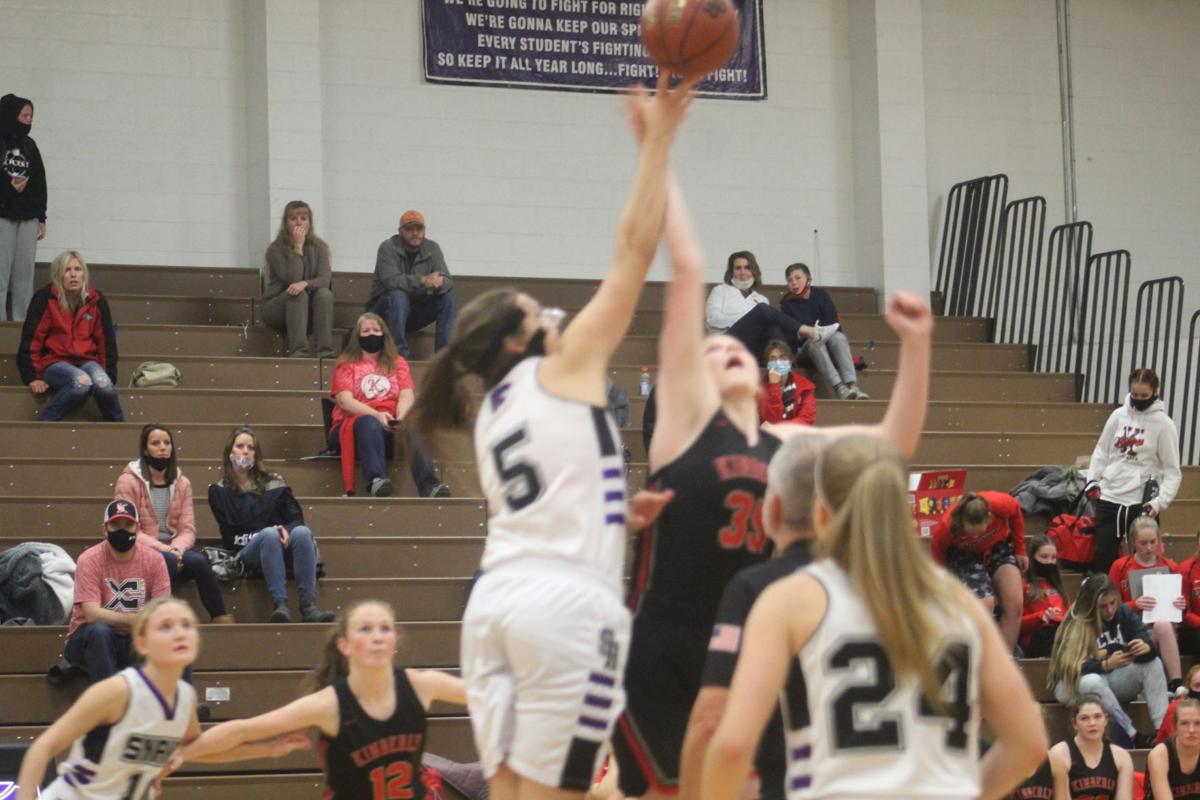 Josee Steadman (5) goes up high to win the opening tip.

Caselle Howell brings the ball up the floor.

Caselle Howell goes up high for a shot against Kimberly.

Josee Steadman (5) goes up high to win the opening tip.

THOMAS – The Snake River Lady Panthers opened the 2020-2021 girls' basketball season Tuesday with a home win against a tough opponent.

It was Kimberly who accepted the challenge of opening against the Lady Panthers, who wrapped up the 2020 state 3A tournament with a second place finish, showing off the player of the tournament in Josee Steadman who set several scoring records during the tournament.

The Lady Panthers graduated three seniors from that team and all were starters in Olivia Kracl, Tatum Cherry, and Jordan Gilbert. Those three were a big part of the team and all contributed during the season to the success that the Lady Panthers had a year ago. That was then and this is now.

At times, the Lady Panthers had two sophomores and two freshmen on the floor and they may have played the best of any lineup head coach Jeff Steadman had at his disposal.

The depth this team has was apparent from the outset, as two potential starters -- seniors Sage Stimpson and Adia Goff -- were on the bench, rehabilitating injuries. Goff may be back in December, but Stimpson may not be back until late January. By that time, the Lady Panthers will have determined what their team will look like and how good they will be.

Whatever shall play out, the game on Tuesday showed that these Lady Panthers will not back down and will give their best effort and that alone may just be enough as the young players gain valuable playing time. There is a lot of talent available for the Lady Panthers to draw from.

Kimberly is a very good team and they made things tough on the Lady Panthers with their height and ability to hit the long range shot.

On a night when the Lady Panthers did not shoot well from beyond the arc, the Kimberly Lady Bulldogs hit shot after shot from outside, keeping the game close into the final minutes.

This Tuesday night contest was just what the Lady Panthers needed to start the year with and they will show improvement from this contest. Most teams improve more between their first and second games than at any other time of the year.

The Lady Bulldogs were tenacious in their play and no matter how far behind they would fall, they always fought back and kept the game close into the final minutes.

Kelsey Stanger almost single-handedly kept the Kimberly squad in the game. She totaled 18 points on the night, many of those points coming on three-point shots and mid-range jumpers as the lithe forward/post was all over the court and proved to be a very tough player for the Lady Panthers to defend against.

As the Lady Panthers tighten their defense up in the next few weeks and reduce the number of turnovers that are being made and the rebounding gets better, the opportunities of teams staying with this Lady Panther team who would seem to be able to only get better. Help is coming with the return from injuries to Goff and Stimpson and this team could be one of the best in Idaho when it is all said and done.

There are a number of tough games on the horizon and the Lady Panthers will be tested time and time again when Sugar-Salem, South Fremont and others come calling. They will also need to learn how to handle the pressure of playing on the road and from all indications, these will be tests that the Lady Panthers will be fine with in these encounters.

It all remains to be seen, but the signs are there that this is going to be a fun team to watch and the players are in place to carry this team a long way during the season.

The team is ranked number three in the state in the coaches poll with the media poll yet to be released, but the signs are there that this could be a very special team and one that will be great fun to watch and follow.

The Filer game is a 1 p.m. contest on the road.