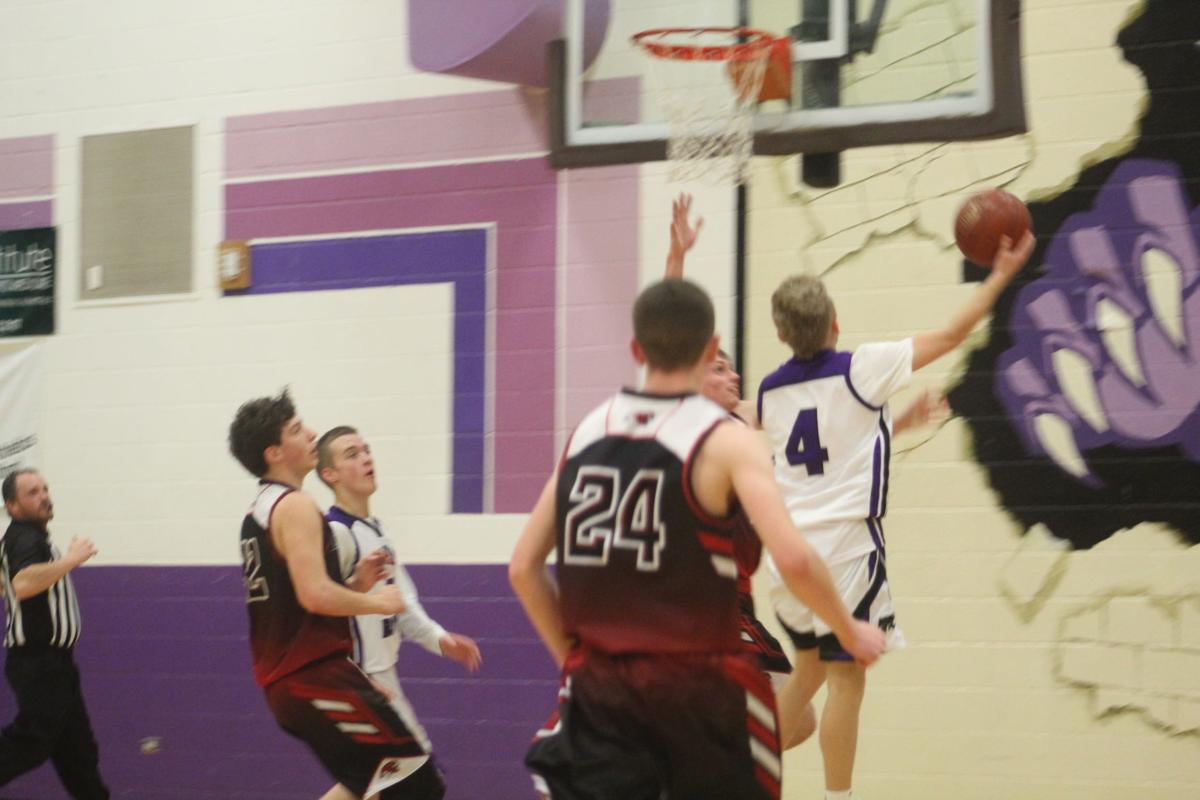 Noah Watt goes up for a layup against the Cougars. 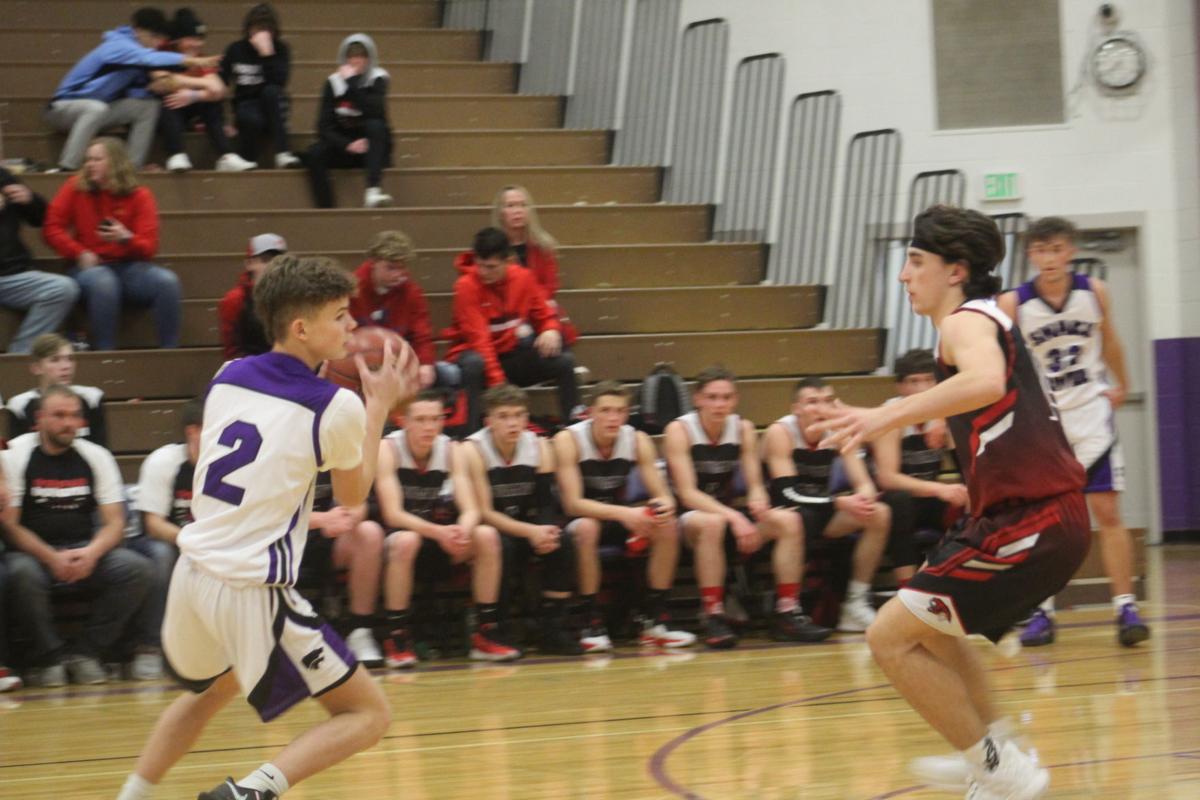 Luke Higginson sets up to drive against South Fremont. 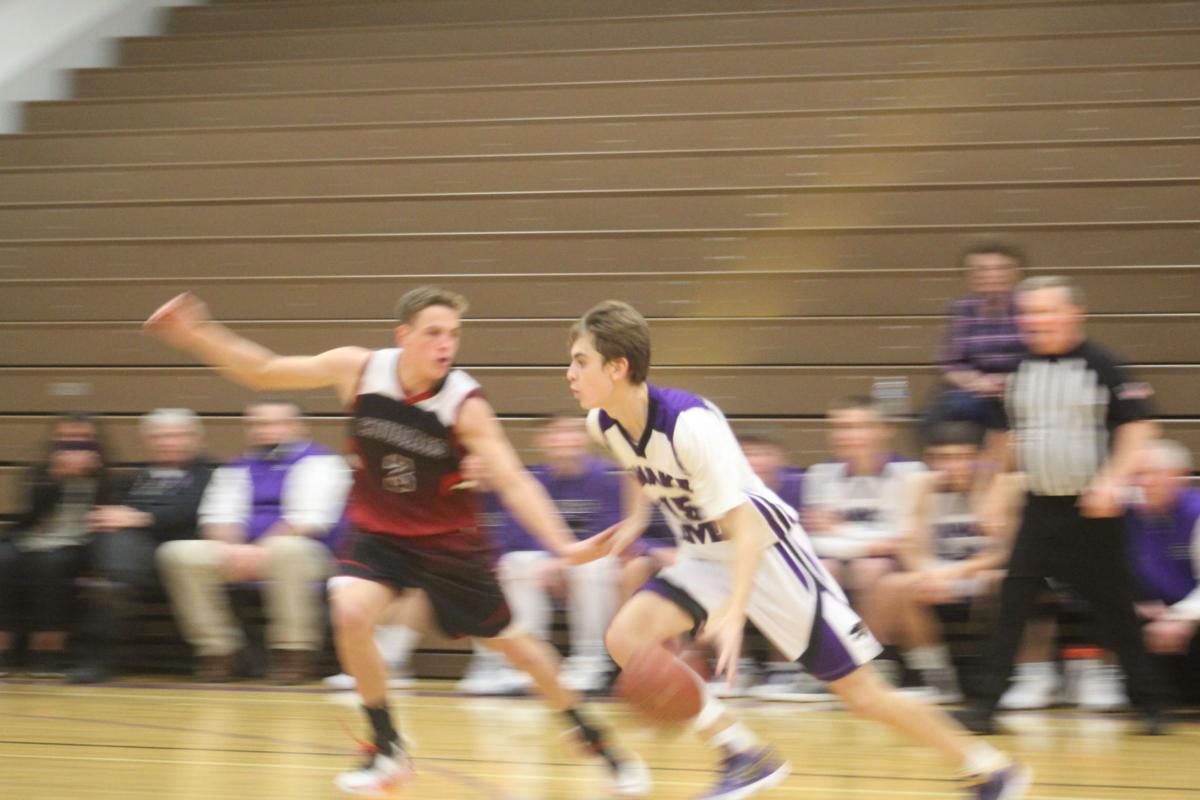 Mitch Lindsay drives past a Cougar.

Noah Watt goes up for a layup against the Cougars.

Luke Higginson sets up to drive against South Fremont.

Mitch Lindsay drives past a Cougar.

THOMAS – There have been times in my life when I couldn’t wait for a highly anticipated game to come along and was so disappointed in the outcome and the game that I wish I hadn’t seen it to begin with.

When the schedule presented the top-ranked team in 3A, Snake River, matched up with the number three team in the state in South Fremont, I was so excited to see the game, I made sure that I had a good seat and was ready for the action. The end result was one of the best games I have seen all season.

The game had a little bit of everything, from long range shooting by both teams and I mean the kind of shooting where the ball barely ripples the net as it goes through the hoop, to driving layups through defenses that would be the envy of any professional player around, to defense, the kind where a player dares another to try and get by and both players excel at what they are trying to accomplish.

That is what the game of basketball is all about. That is what Snake River and South Fremont delivered on Saturday night. These are two very good teams and it is very likely they will have to meet again before the 3A state tournament is played the first week in March.

The game got off to a great start for Snake River as the first shot put up by sharp shooting guard Noah Watt hit the bottom of the net from three-point land and just like that, the battle was on. Before the quarter ended, Watt had scored 11 of Snake River’s 26 points, adding another three-pointer, a traditional three point play and a pair of free throws and the Panthers were cruising, ahead by 14 points at 26-12 and it wasn’t as if South Fremont wasn’t in the game, they were very much in the game with some great three point shooting of their own, mixed in with some offensive rebounding and both teams were stretching everything they had to provide coverage all over the court.

The second period slowed down a bit, but only a bit, as Snake River still put up another dozen points, but South Fremont put up 17 to trim the lead a bit.

The only thing that seemed to slow either team down a bit was foul trouble. Snake River already had starter Cole Gilbert on the bench with three fouls and South had a couple of players sitting with two fouls on them, but the expectations of more fast paced action kept the fans glued to their seats.

The halftime score of 38-29 in favor of the Panthers and the murmuring from the stands was for more of the same kind of action in the second half. Surely the two teams would have to slow down some from the breakneck speed at which the first half had been played.

The shooting percentages on both teams were high, from three point range and also inside and both teams were getting their share of offensive rebounds and when the opportunity to shoot free throws came along, it seemed almost like they were automatic.

In the third quarter, the Panthers tried to be a little more patient with their offense and it did slow things down a bit, but only slightly. Noah Watt was still going to take his open threes and when teammate Mitch Lindsay got into the act with his long range ability and high flying drives to the hoop, things started to heat up again.

Back and forth the teams went and that is when the bigger and deeper bench of South Fremont got involved in things. More to give the starters a breather than anything else the defense tightened up and the fouls began to add up. When a couple of double fouls were called, things got even more testy, especially with the second one, which caused the departure of the Cougars’ best player, Tag Bair, who seemed to be everywhere on the court.

By the time the buzzer sounded to end the third quarter, the score was still in favor of the Panthers, but it had been trimmed to only eight points, at 56-48.

Down the stretch is where the free throw shooting of Lindsay and Watt came into play. Between them, they only missed one of 15 free throws in the fourth quarter and as a team, the Panthers would be able to add another 27 points to the scoreboard. South Fremont also got its share of points, adding another 21 to their tally sheet and the game would end with Snake River ahead 83-67, but it was the kind of game that a fan wouldn’t have minded see go another two or three quarters, it was that entertaining.

It was definitely a chance for Snake River to show off two of its seniors in Lindsay and Watt, who combined for 60 points on the afternoon. Lindsay led all scorers with a game-high 33 and Watt tossing in another 27 for the Panthers. Lindsay was 11 for 11 from the free throw line for the game while Watt was 13 of 14 for the game and tossed in three long range shots and an assortment of spinning and weaving driving layups.

To aid those two, Trey Poulter and Cole Gilbert both showed off their inside ability with a combination of whirling reverse layups and shots that you wouldn’t normally feel would have any chance of going in.

South Fremont countered back with a quartet of players who reached double digits in scoring as Dallin Orme and Tag Bair and Kaimen Peebles all tossed in16 points and Cooper Hurt would add 11 points to the tally.

Snake River plays next on Friday, when they will take on Kimberly and then will face off against Soda Springs on Saturday. Both games are expected to be tough battles for the unbeaten Panthers who are currently at 10-0 on the year.