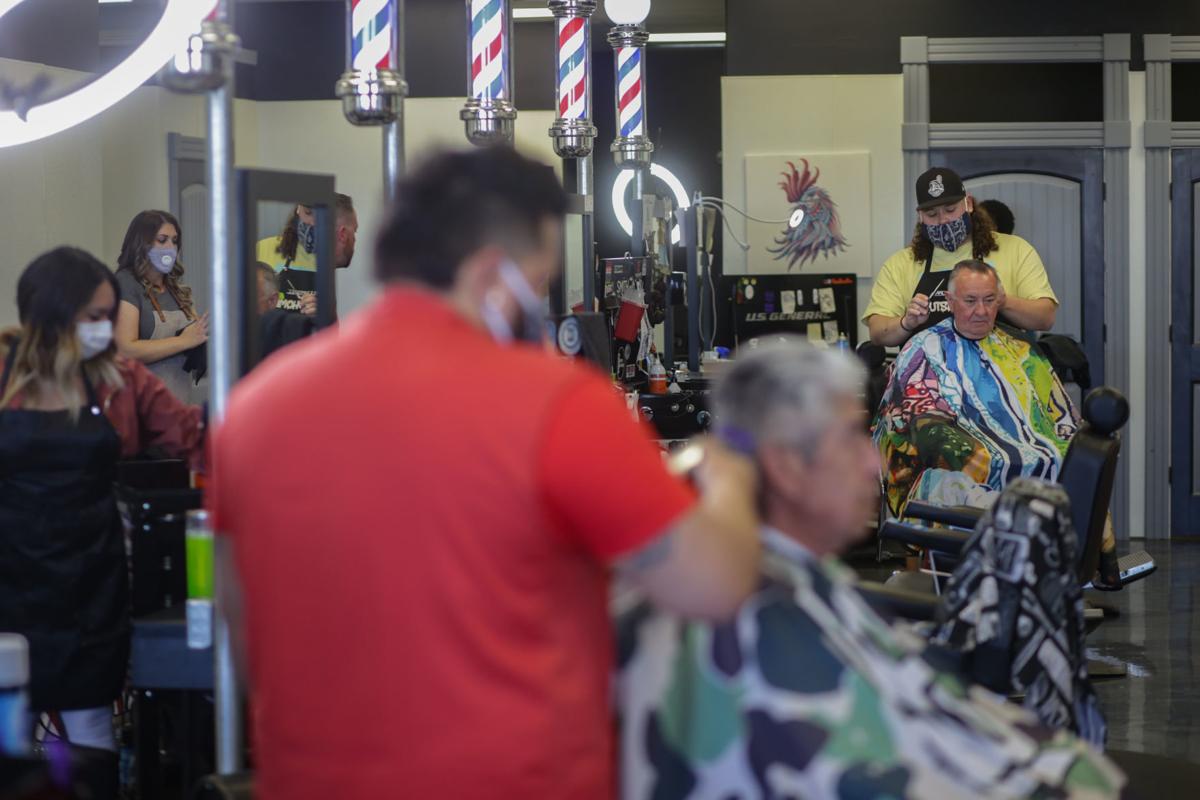 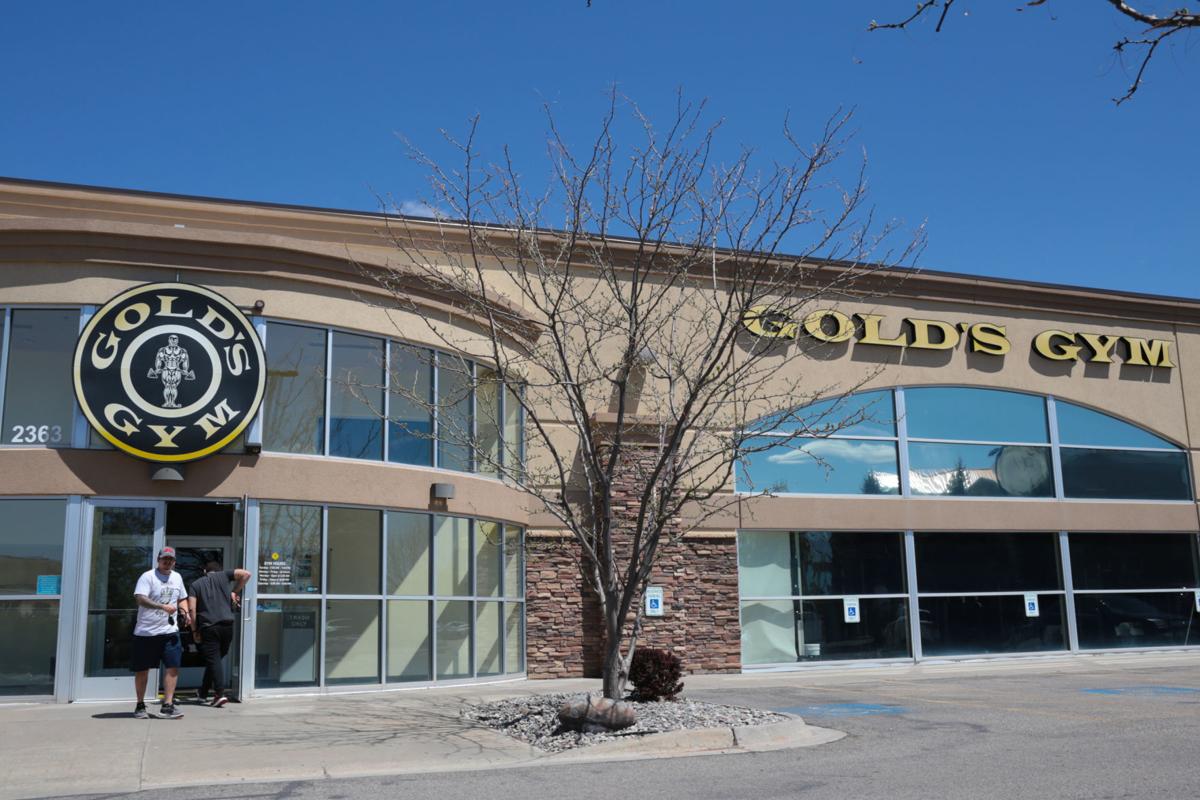 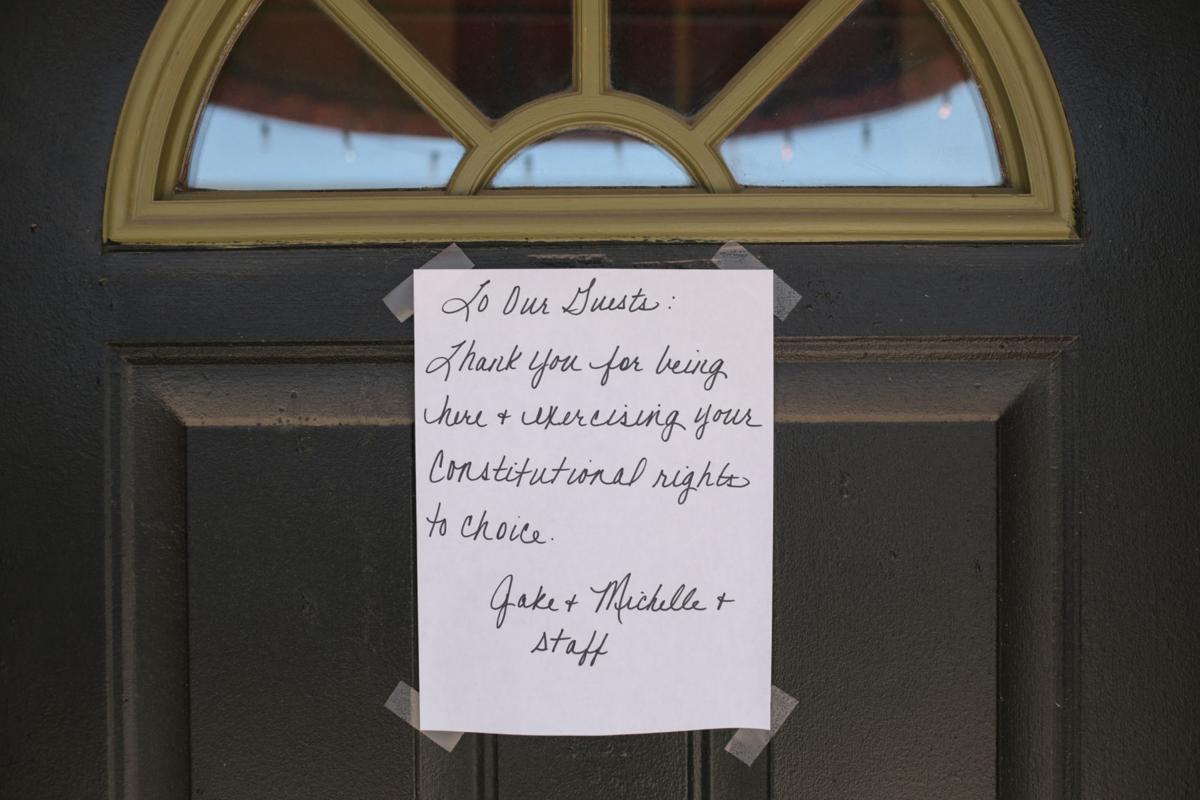 A sign at the Frosty Gator that states "To our guests: Thank you for being here and exercising your Constitutional rights to choice. Jake and Michelle and staff" is seen on Thursday, May 7, 2020. 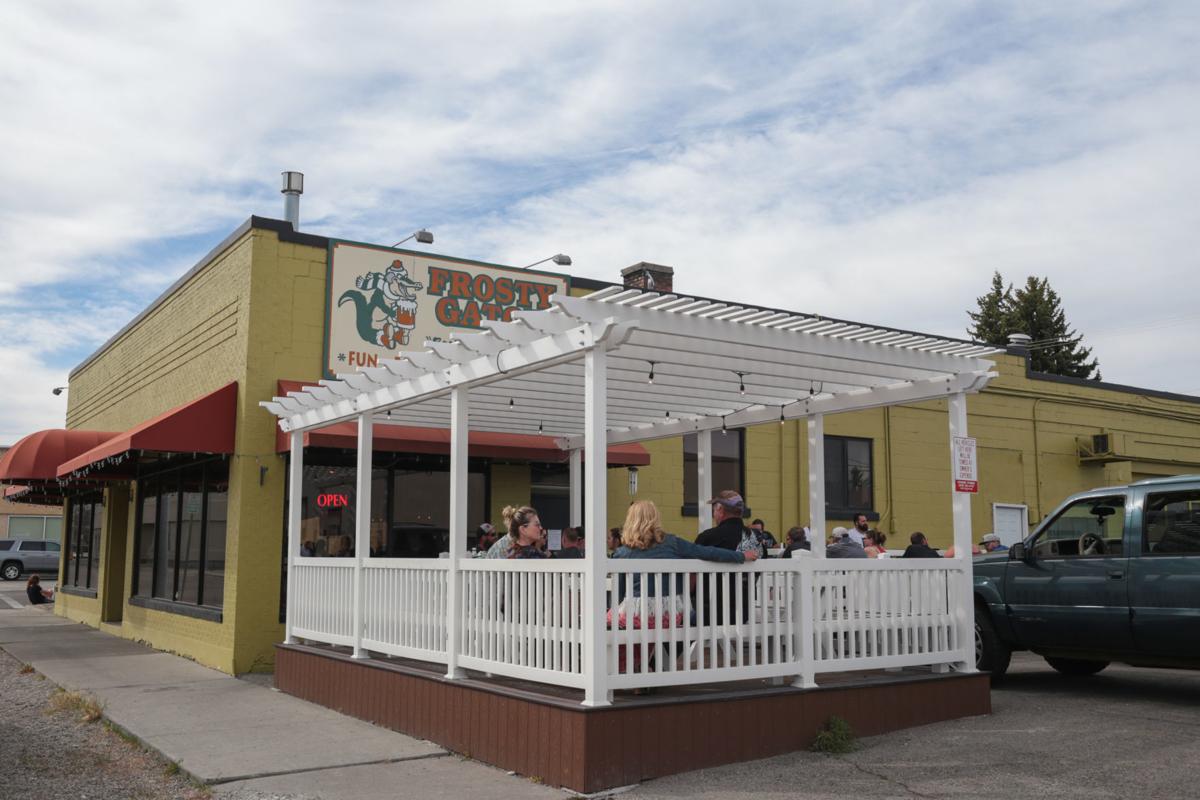 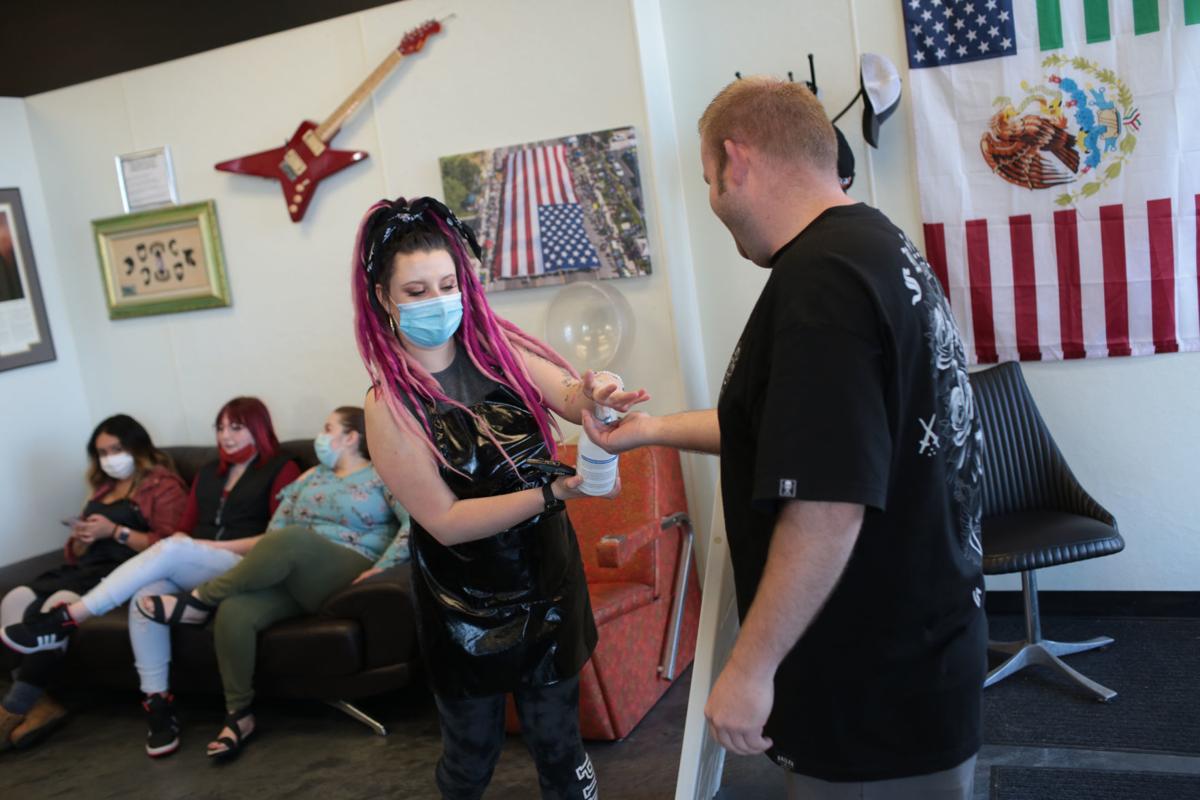 Mykel Church gives Kurt Bybee hand sanitizer as he enters Lyle Amado Barber Shop for a haircut on Friday, May 8, 2020. 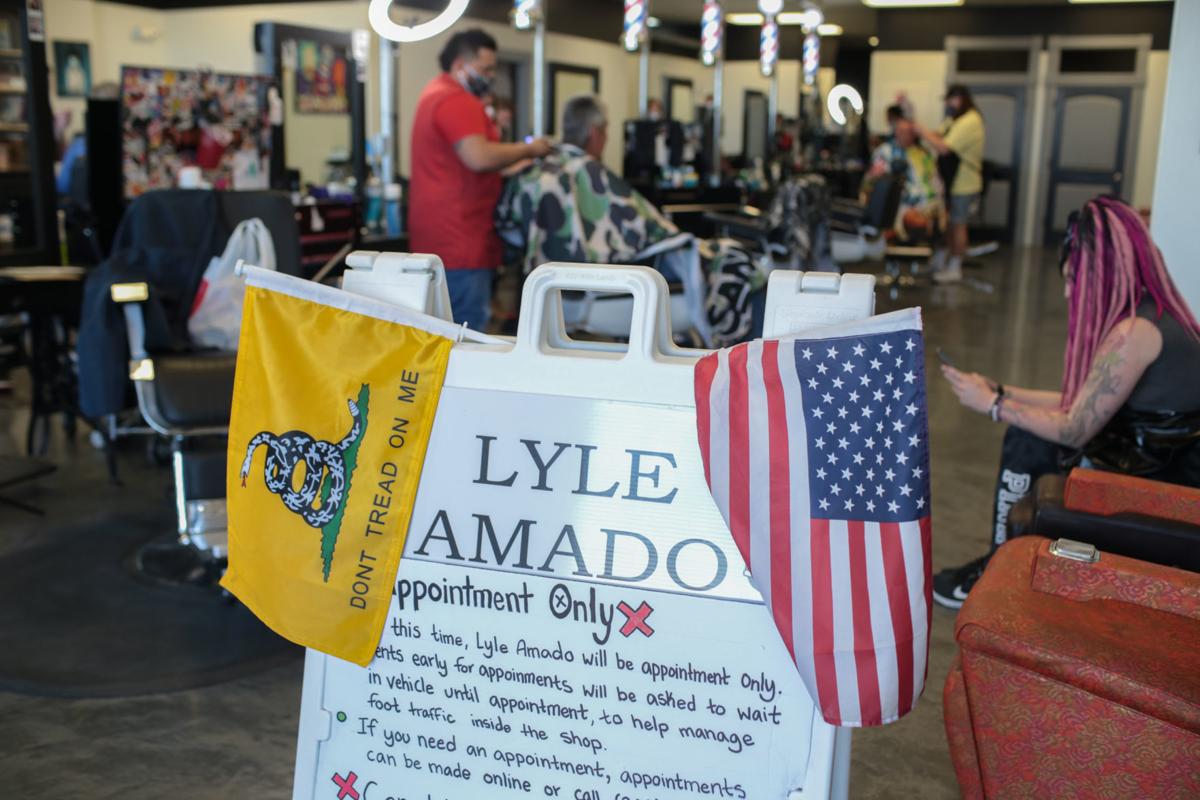 A sign saying "Lyle Amado Barber Shop is open by appointments only" is seen on Friday, May 8, 2020. 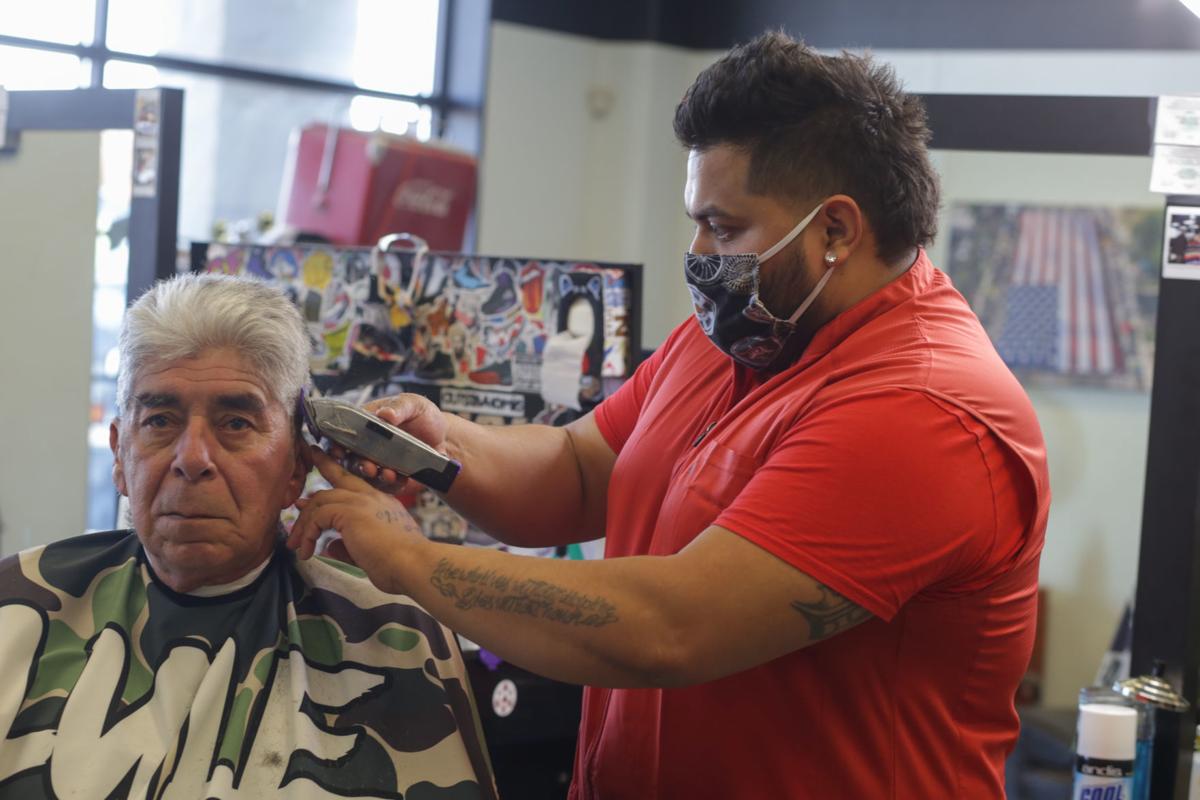 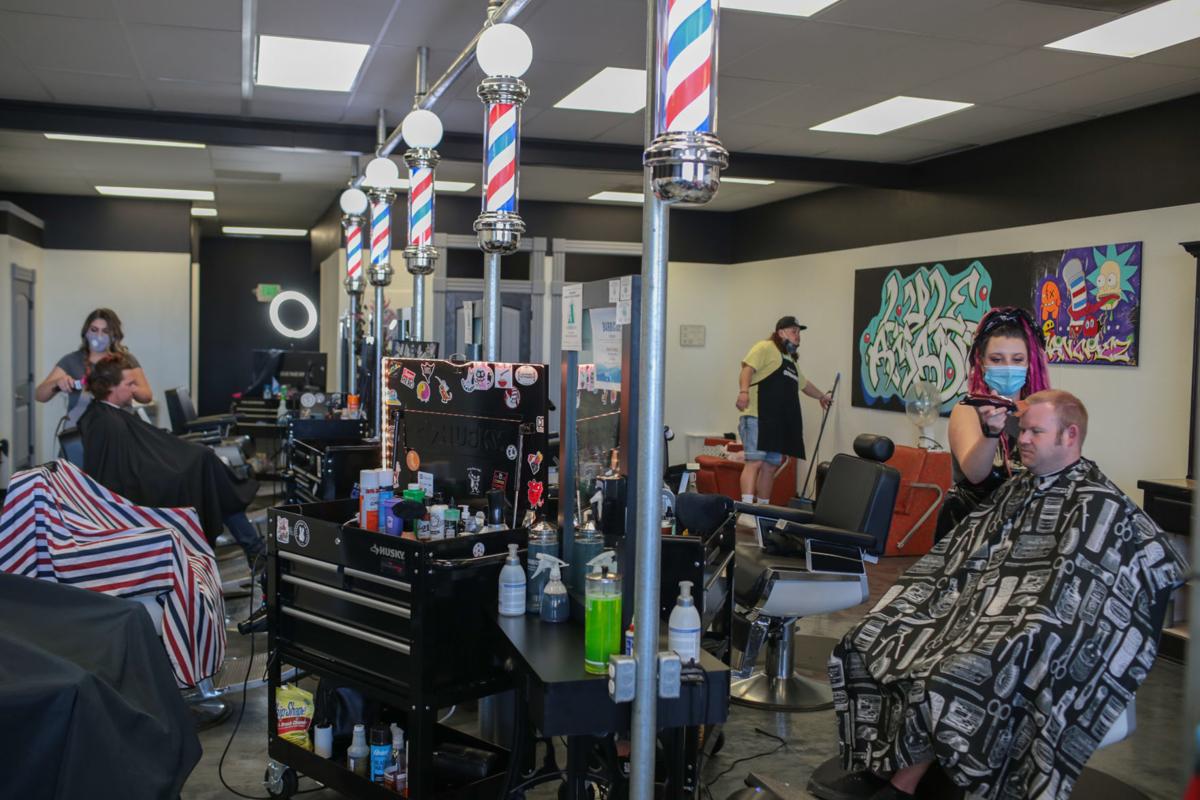 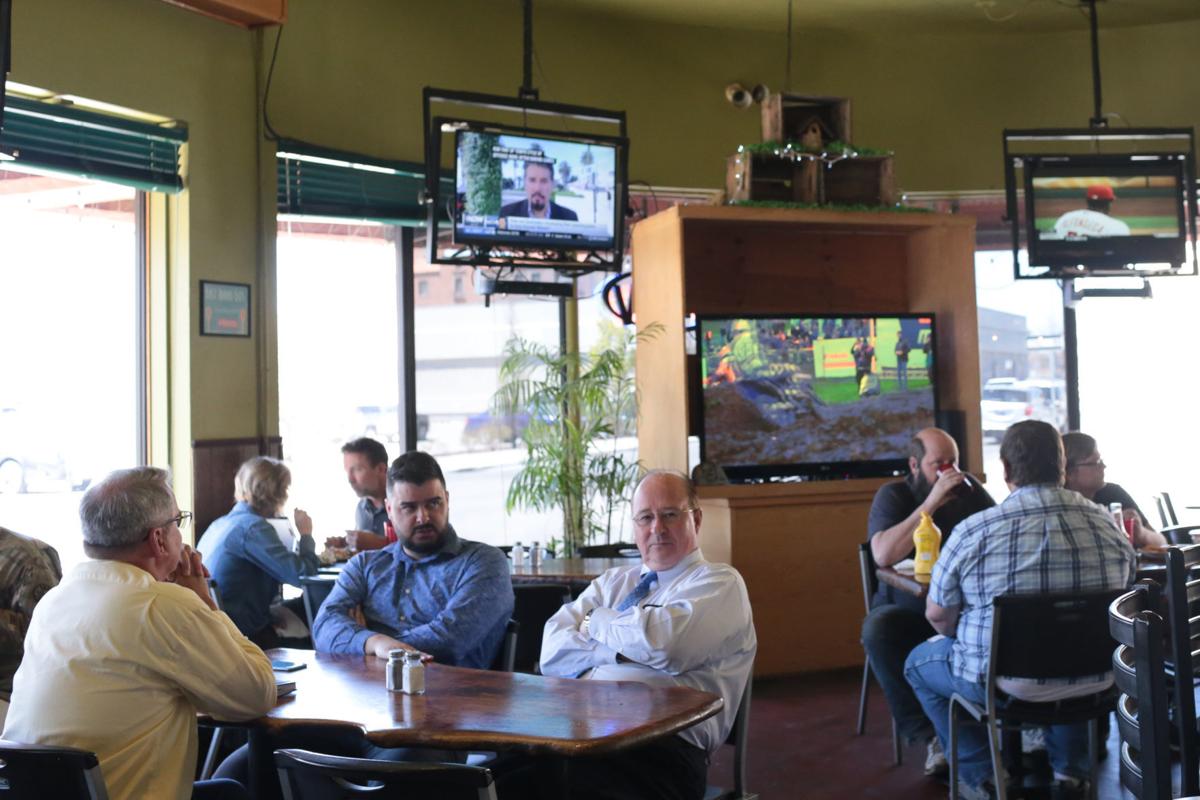 Patrons wait for food at The Frosty Gator on Thursday, May 7, 2020. 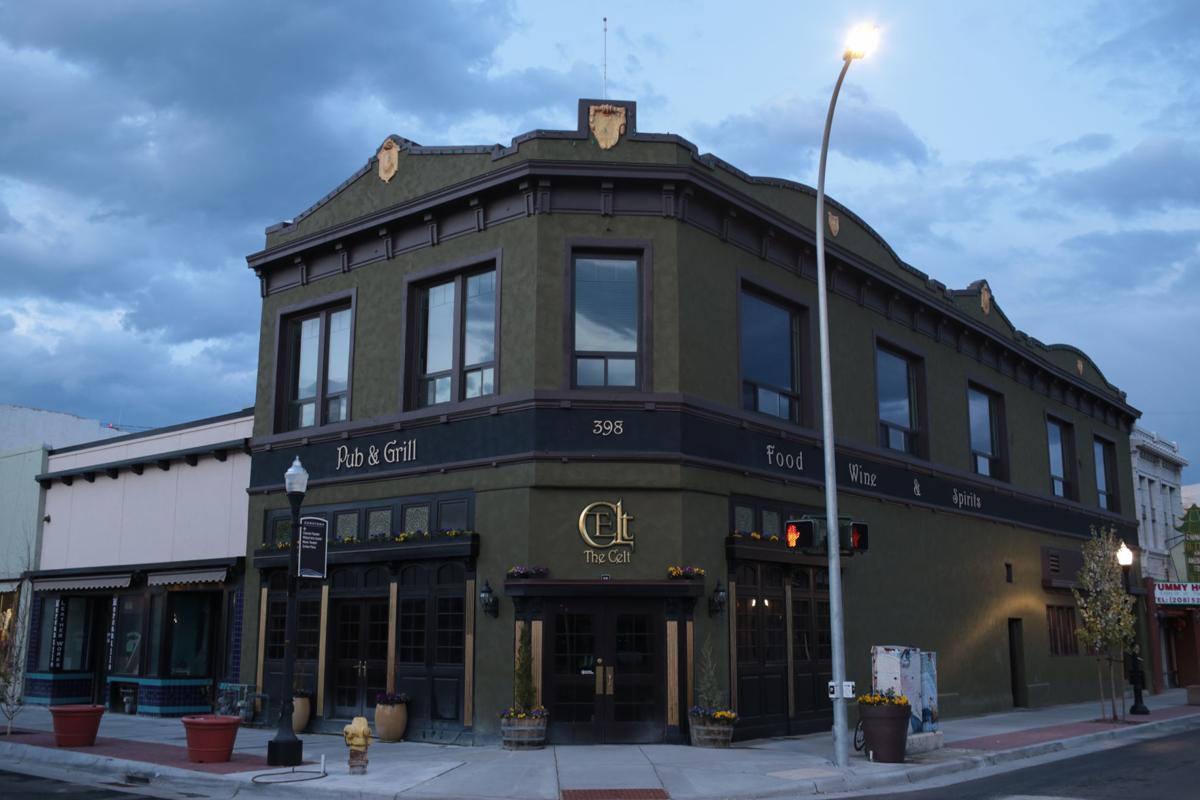 A sign at the Frosty Gator that states "To our guests: Thank you for being here and exercising your Constitutional rights to choice. Jake and Michelle and staff" is seen on Thursday, May 7, 2020.

Mykel Church gives Kurt Bybee hand sanitizer as he enters Lyle Amado Barber Shop for a haircut on Friday, May 8, 2020.

A sign saying "Lyle Amado Barber Shop is open by appointments only" is seen on Friday, May 8, 2020.

Patrons wait for food at The Frosty Gator on Thursday, May 7, 2020.

Idaho’s staged reopening from the stay-home order has opened fault lines across the state, dividing the public, business owners, law enforcement and lawmakers. At the epicenter is Gov. Brad’s Little’s Stay Healthy Order. It details which businesses can reopen on which dates. Most businesses have complied with the order by remaining closed until their assigned time for reopening. Others have chosen to openly violate the order.

Compliant business owners find it unfair to see nothing done to those in blatant defiance of the order. Those opening early say they are acting on their constitutional right to assemble.

The split has extended up through elected officials. Little is forced to watch as Lt. Gov. Janice McGeachin cheers on illegal openings. Health officials warn of the continued danger of group gatherings, while customers celebrate the ability to grab a drink or get a haircut.

With some lawmakers’ support and law enforcement’s decidedly tolerant stance, business owners on both sides are left questioning whether the order holds any real power.

Little issued an order stating restaurants could open May 16.

On May 3, The Frosty Gator in Idaho Falls opened its dining room.

A sign on the door thanked customers for “exercising their Constitutional rights to choice.” Over the weekend, the restaurant was packed with customers.

A number of other local eateries have followed suit in opening their dining rooms, including the Rustic Vine, Taqueria El Rodeo, North Hi-Way Cafe and D’railed.

Lyle Amado Barbershop in Ammon is another local business that opened early. According to Little’s order, hair salons are not to open until May 16. Price opened April 22. Tyler Price, the barbershop’s owner, let both law enforcement and the governor’s office know his plans ahead of time.

“I just feel like we live in America and that our government has failed us and want to put us in a position to take away our constitutional rights,” Price said.

Price said he and his 10 employees are busier than they have ever been.

Gyms too have opened prematurely. Gold’s Gym, Bodifi and The Edge climbing gym have all welcomed members more than a week ahead of time.

Little’s order came in no uncertain terms. Opening early is illegal. It states that “the violation of any mandatory provision of this Order constitutes an imminent threat to public health. Violation of or failure to comply with this Order may constitute a misdemeanor punishable by fine, imprisonment, or both pursuant to Idaho Code § 56-1003(7)©.”

Yet mixed messages abound as other government officials take a different stance. McGeachin was among the first to show up for Hardware Brewing Co’s early opening on May 1 in Kendrick. Others in attendance included state Sen. Dan Johnson and state Rep. Mike Kingsley.

“I wanted to show them my support for their effort. … People can manage themselves and we know how to take care of our customers, our employees, our business,” McGeachin told the Moscow-Pullman Daily News. “We don’t need the government to mandate things.”

State Rep. Chad Christensen, R-Ammon, has been another vocal opponent to the order. Last week, Christensen took his son for a sit-down meal of bacon cheeseburgers at the Angus Restaurant in Swan Valley and encouraged others to do the same.

“We went inside and sat down to eat! We defied the order and so did the owners, Mike and LeAnn! Good for them. I have their back, as their state representative...Live your lives as free people!” Christensen wrote on Facebook.

Christensen said the order may be for the public’s safety, but that he believes by defying the order, businesses and customers are choosing liberty over safety.

Little’s response to defiance, much of which has come from his own party, has been measured.

“I just think it’s a little disrespectful to the people that are making a sacrifice and doing the right thing,” Little told KREM 2 News.

In his order, Little asked for assistance from law enforcement.

“The Governor and Director requests that the Sheriffs and Chiefs of Police in the State of Idaho, and Idaho State Police ensure compliance with and enforce this Order,” states Little’s order.

Despite this request, officials with the Bonneville County Sheriff’s Office and the Idaho Falls Police Department have made a deliberate choice to remain hands-off in their approach toward businesses in violation of the order. According to Idaho Falls Police Department public information officer Jessica Clements, this approach is being taken statewide by police departments. No business in Idaho has yet received a citation for opening early.

“It is against the law. We’ll tell people it’s against the law, and we think they shouldn’t do it. But at the end of the day, we’re relying on voluntary compliance, same as we do with traffic laws and other laws of this nature that are out there,” said Idaho Falls Chief Bryce Johnson.

When it comes to questions and complaints over businesses breaking the law, callers are often passed along to the governor’s office.

When law enforcement officers do investigate complaints and find a business operating in violation of the order, both Lovell and Johnson said officers will talk to the owners to help educate them on the order.

“In regards to businesses and stuff, we haven’t taken any enforcement action. In that regards, we’re just encouraging them to follow the law and follow the guidelines that are put out,” Lovell said.

When officers showed up to the Hardware Brewing Co. while McGeachin was in attendance, police asked the owners whether they understood the order. Other than that, Idaho State Police detective Jake Schwecke said there wasn’t much more to be done.

“The lieutenant governor’s here. What are you going to do?” Schwecke told the Moscow-Pullman Daily News.

Confirmed and probable cases of the novel coronavirus in Idaho reached 2,260 people and 70 deaths as of Monday afternoon according to the Idaho Division of Public Health.

Between April 15-30 there were 241 “COVID-19-like illness patient visits to Emergency Departments” across Idaho according to the Idaho Division of Public Health, an average of 15 per day. The average cases between April 24 through May 8 was 10.5.

During the same period there were 477 cases of the novel coronavirus confirmed or suspected by the Idaho Division of Public Health, averaging 29.8 per day. From April 23 through May 9 there were an average of 24.5 cases.

These numbers show there is a downward trend over the 14-day period which is required by the Idaho Rebounds timeline to allow certain businesses to open on the planned May 16 date.

“Opening Idaho at the right pace is critical and the plan we’re laying out will give consumers, employers, and employees a concrete path to prosperity,” Little said during an April 23 press conference announcing the state’s plan to reopen. “We cannot and will not progress through the stages of reopening if people do not continue personal measures to limit their exposure to coronavirus.”

Businesses opening early could jeopardize the progress Idaho has made in slowing the virus.

“We’re certainly going to see an increase in cases. I think everybody expects that. It’s a matter of doing it in phases and monitoring that those cases aren’t an excessive number, although any cases are too many,” said Kenneth Krell, an ICU doctor at Eastern Idaho Regional Medical Center.

Researchers at University of Chicago looked at cellphone data from SafeGraph, a company that aggregates anonymized cellphone data. They wrote in the New York Times that gyms and restaurants host patrons for relatively long periods, and those visitors touch a lot of surfaces, increasing the chance to spread the novel coronavirus.

“I think if people are crowding into places that tend to be crowded and doing so prematurely at a time when we’re not sure what the actual presence of the virus is in the population that can create serious risk in terms of a potential resurgence of the virus,” said Oeindrila Dube, professor at University of Chicago’s Harris School of Public Policy and co-author of the study.

Projections from Columbia University Mailman School of Public Health indicate that if Idahoans cease social distancing there would likely be 47 deaths per day across the state by June 6. With a 20 percent reduction in contact there would be 4; at a 40 percent reduction, they project zero new deaths.

Using anonymized cellphone data, research by the Institute for Health Metrics and Evaluation at the University of Washington shows there was a stark decrease in people going out from March 10 through April 5 in Idaho. Those numbers have begun creeping up since then but are still well below the March 10 numbers.

That creep can have consequences.

Authors of the Institute for Health Metrics study write: “Unless concerted efforts to accelerate testing and other key containment strategies take place (e.g., contact tracing and case-based isolation, widespread use of masks in public), there could be elevated risk for exposure to the novel coronavirus and thus transmission among communities, or even resurgence of COVID-19 infections and mortality.”

Idaho has tested 32,000 people for the novel coronavirus since March 2. Tests run between April 26 through May 2 showed 4.7 percent of people tested positive, up from 3.6 percent the previous week.

“We don’t know how many cases we have in a day. I’ve heard estimates that it’s probably twice the number that is reported,” said Krell.

“I think we need to be cautious and do this in a programmed manner and, if we don’t, then we’re going to back to more restrictions and more economically hurt than we are now. And hell knows it’s been a horrible economic hit for a whole lot of people,” said Krell.