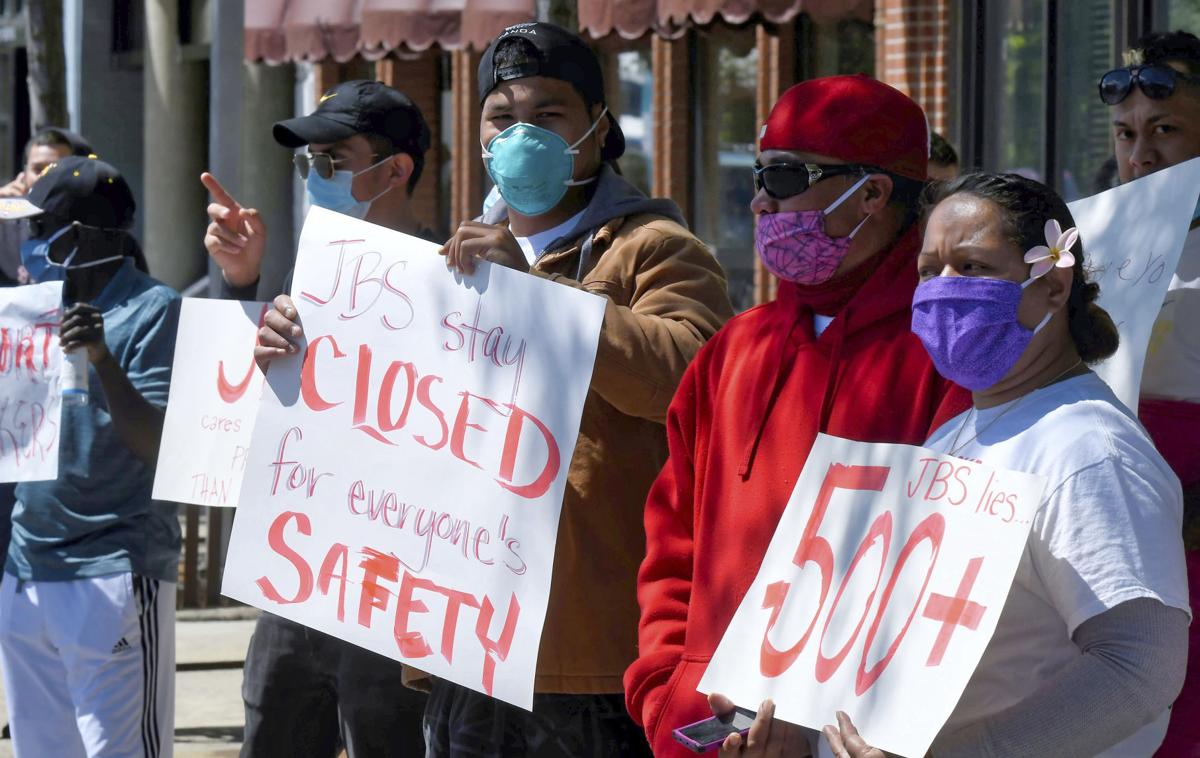 JBS workers protest June 9 in Logan, Utah. Hundreds of workers at the meatpacking plant in Hyrum, Utah have tested positive for COVID-19. 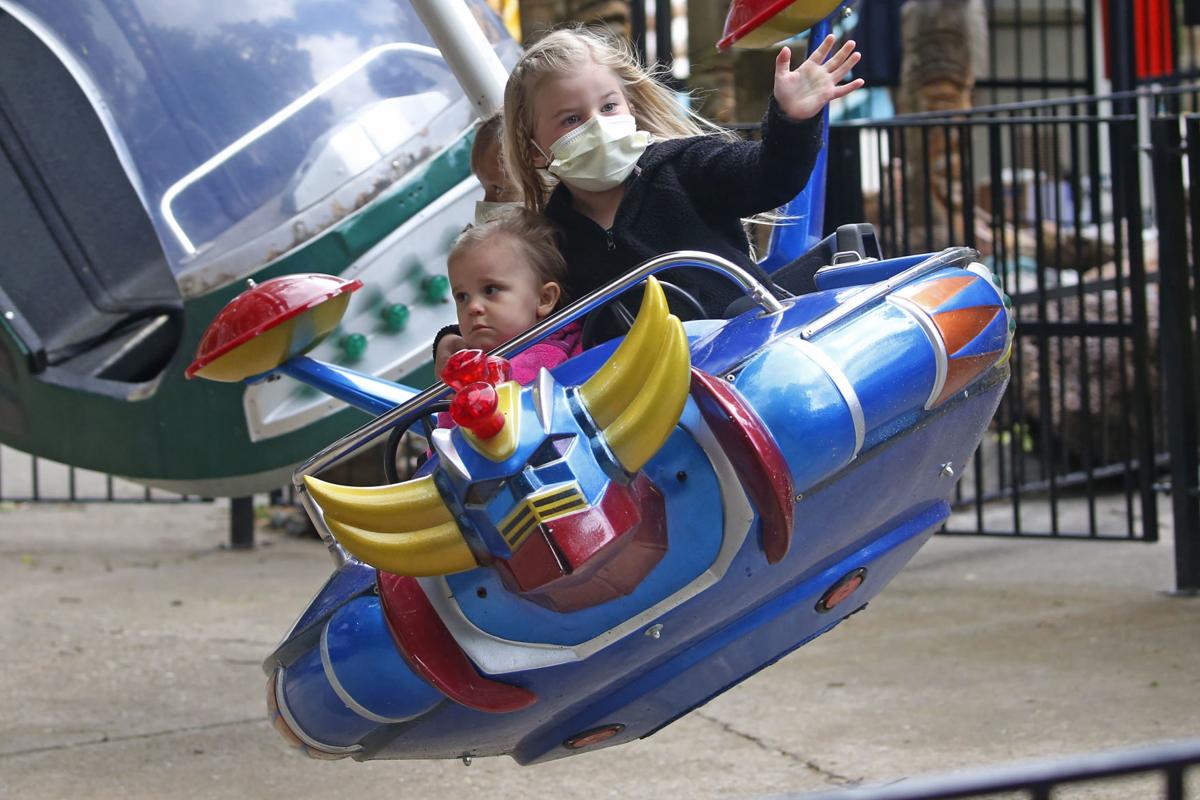 In this file photo from May 23, 2020, Lennyn, left, and Kassie Paget ride the Moonraker at Lagoon Amusement Park, in Farmington, Utah. After a season break that was extended for months by COVID-19 restrictions, Utah’s amusement park, Lagoon, reopened for business just in time for the Memorial Day weekend. Amusement parks of all sizes are adjusting everything from selling tickets to serving meals while trying to reassure the public and government leaders that they’re safe to visit amid the coronavirus crisis and warnings against large gatherings. (AP Photo/Rick Bowmer, File)

JBS workers protest June 9 in Logan, Utah. Hundreds of workers at the meatpacking plant in Hyrum, Utah have tested positive for COVID-19.

In this file photo from May 23, 2020, Lennyn, left, and Kassie Paget ride the Moonraker at Lagoon Amusement Park, in Farmington, Utah. After a season break that was extended for months by COVID-19 restrictions, Utah’s amusement park, Lagoon, reopened for business just in time for the Memorial Day weekend. Amusement parks of all sizes are adjusting everything from selling tickets to serving meals while trying to reassure the public and government leaders that they’re safe to visit amid the coronavirus crisis and warnings against large gatherings. (AP Photo/Rick Bowmer, File)

Two Idaho health experts say a recent spike in COVID-19 cases in neighboring states could translate into more cases in Idaho. And the trend spells trouble for regions such as southeastern Idaho, which have residents who sometimes work in a close neighboring state.

Idaho reported it has more than 3,500 cases as of Wednesday afternoon. This month, Idaho has seen a noticeable uptick in COVID-19 cases following the state’s weekslong move to lift restrictions on social interaction, the Idaho Press reported. But the rise in cases in nearby states signal Idaho could see sharper increases in COVID-19 cases.

“It most certainly means we’re going to have an increase as well,” said Benjamin Ridenhour, a University of Idaho professor who developed the coronavirus model that Idaho uses for its reopening.

The New York Times reported, in an article compiling COVID-19 case counts in each state, that most states that neighbor Idaho have experienced spikes in COVID-19 cases. The Times also reported most of these states are reopening and lifting restrictions.

On Saturday, Idaho entered Stage 4 of Gov. Brad Little’s reopening plan Idaho Rebounds, which allows all businesses to open. The Idaho Press reported that at a press conference last Friday, Little said Idaho “narrowly” met its criteria to enter the final stage of reopening. Idaho lifted some restrictions on nonessential travel in Stage 3, on May 30.

“As those case counts in other states go up, the chances that someone in Idaho gets those cases, as well, goes up if we don’t curb travel,” Ridenhour said. In other words, he said, “the more people travel, the harder it is to contain the disease.”

Little’s office could not be immediately reached for comment.

The COVID-19 case increase in neighboring states is particularly high in Utah, which borders southeastern Idaho. Utah reported on Wednesday afternoon it had slightly more than 15,000 total COVID-19 cases. Almost 1,200 of those cases are in Bear River Health Department, which includes three counties in northern Utah along the border of southeastern Idaho, according to the Bear River Health Department’s website on Wednesday afternoon.

Health officials in the southeast Idaho-northern Utah area said they’re concerned that the recent spike in Utah could translate into more cases in Idaho. Some residents of the area live in southeastern Idaho, for instance, and work in northern Utah, said Josh Greer, spokesperson for Bear River Health Department.

“Because we are one big community and obviously the virus doesn’t see state lines ... our numbers will impact Idaho,” Greer said.

Many of Bear River’s new COVID-19 cases are linked with a recent outbreak at JBS meat packing facility that’s been linked to nearly 300 cases, he said. But he noted that “beyond that, I think we’re just getting to the point that we know the virus is in the community, we’re seeing it spread throughout the community, and we’re seeing it pop up all over the place.”

Mann said “even with what you call normal day-to-day, there’s a lot of back and forth” between people in southeastern Idaho and northern Utah.

“Because we’re having more interaction with people and anytime we have interaction, that’s a potential maybe for the virus to spread,” Mann said. She also echoed an urge for people to continue following public safety measures to prevent the spread of the coronavirus.

Mann said she thinks that southeastern Idaho’s likelihood of experiencing case increases associated with Utah’s case increase is “dependent on how we choose to approach this. If we want to disregard the recommendations around physical distancing, around cloth face coverings, around hand-washing ... we have a potential to see a sharp increase in cases.”

Idaho and Utah health officials publicly report COVID-19 cases by where people live, not where they contract the disease. For instance, if someone who permanently lives in Pocatello, contracts COVID-19 in Logan, Utah, their case would be reported by Southeastern Idaho Public Health District.

Some people don’t get tested in the state they live in, or they even contract it while they’re out of their home state. Data is difficult to track for these cases, which Ridenhour said muddies the water” for knowing how severe individual outbreak events are when they involve people who live in different states.

Idaho Department of Health and Welfare spokesperson Niki Forbing-Orr said the state doesn’t track cases of non-Idaho residents being tested in Idaho, or the locations where Idahoans receive positive test results for COVID-19. Utah Department of Health spokesperson Jenny Johnson said Utah used to track how many Idaho residents test positive for COVID-19 at a Utah lab, but they are no longer tracking and reporting such cases. Johnson couldn’t immediately provide figures for how many Utah residents tested positive in Idaho.

“It would be great if” spread between states wasn’t happening, Ridenhour said. “But obviously we can’t influence what’s going on in other states and it’s hard to curb people’s travel between states as well. The public health system doesn’t abide by state borders.”

VICTOR — In a press release Wednesday morning, Eastern Idaho Public Health reported that it is investigating a case of COVID-19 in a customer …