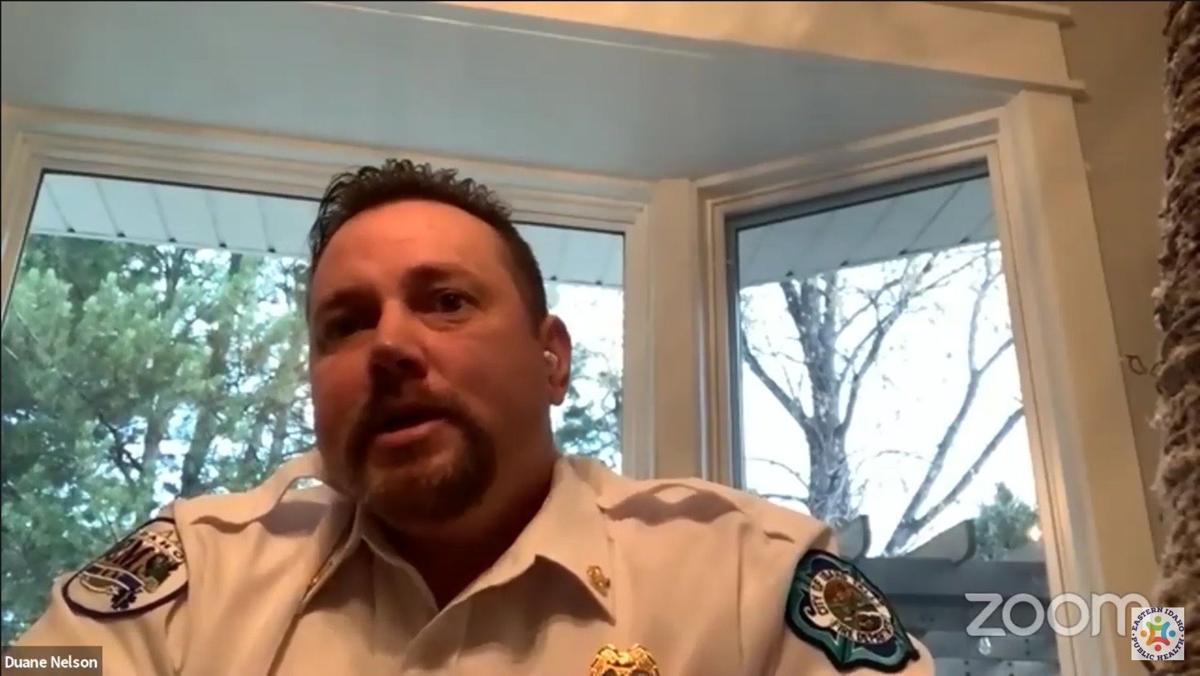 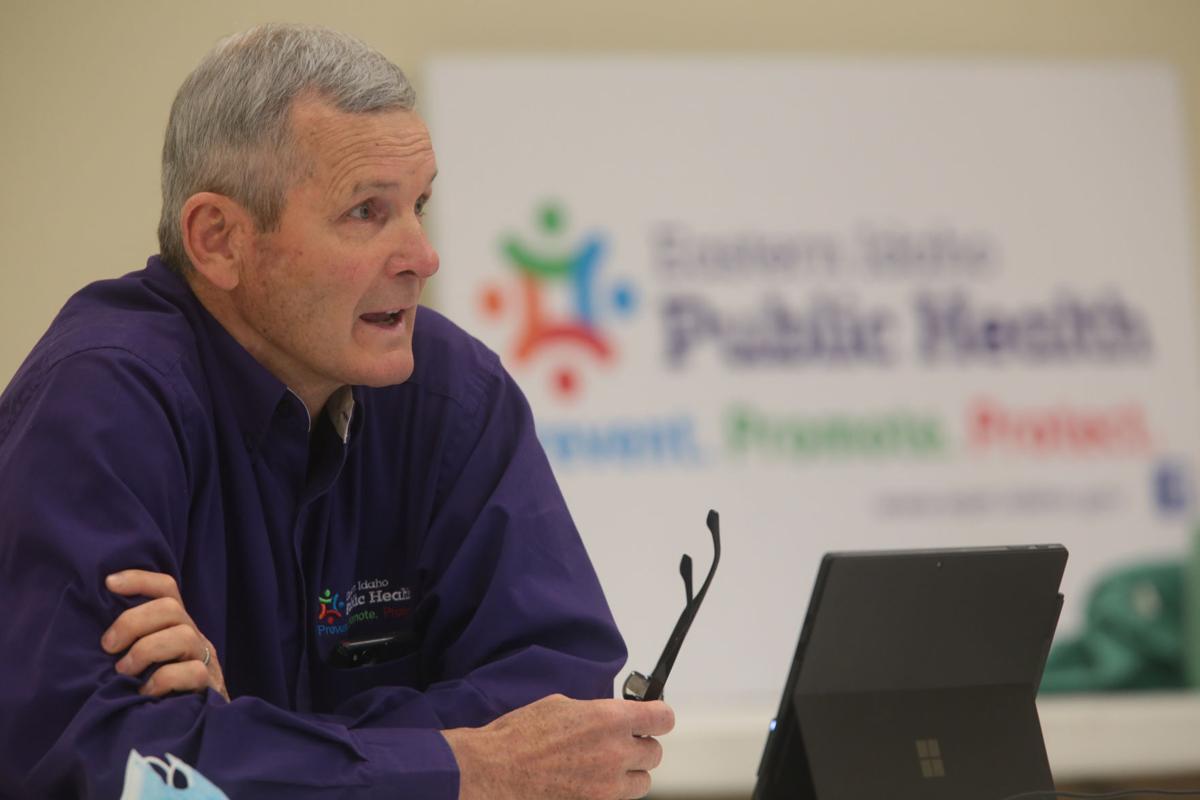 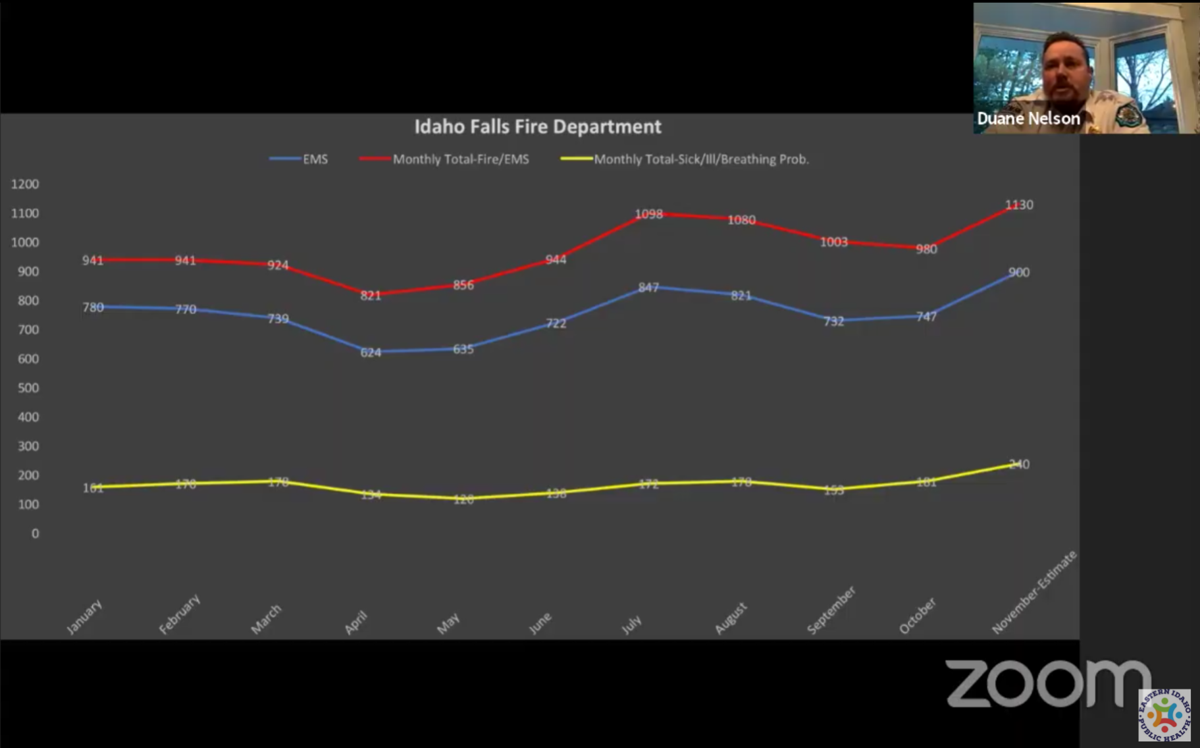 Idaho Falls Fire Chief on Thursday showed Eastern Idaho Public Health's board a chart mapping the rise in EMS and fire calls, which coincide with a rise in the number of ill patients EMS helps.

Idaho Falls Fire Chief on Thursday showed Eastern Idaho Public Health's board a chart mapping the rise in EMS and fire calls, which coincide with a rise in the number of ill patients EMS helps.

“No fire chief wants to get in front of the camera and say that we’re on the razor’s edge; we are on the brink of a failure in the community to provide care,” Duane Nelson told the eastern Idaho health board. “But that’s what I’m here to do today. We need something to happen. We cannot maintain a level of service that this community has been accustomed to, and we have had the pleasure to deliver, without something significant changing.”

This year, Nelson said, EMS and fire calls have risen around 17% in the area. The rise has been sharper than typical. Part of it is due to “operational changes,” Nelson said, but the rise in calls coincides with a roughly 30% bump in total sick patients. That “trend is directly related to COVID,” he said.

“The calls are coming too fast. We’re running out of ambulances every day now,” Nelson said.

He said it’s straining EMS resources so much in the area that the city might have to request additional resources from the state. But, Nelson said EMS departments across the state are experiencing similar strains.

“That means nobody has the resources to send,” he said. Later, he said, “this is not just a COVID issue. We are on the precipice of not being able to care for all of the other things that come to our regional hospitals.”

Eastern Idaho Regional Medical Center was treating 43 patients on Tuesday who were admitted for COVID-19, administrator David Hoffenberg said. Only 29 of those patients have had symptoms within the last 10 days.

“Over 1/3 of the patients are in the facility for a very extended period of time,” he said.

“I think we can all speak together that we are nervous about our ability to (operate under current conditions) for the long-term,” said Hoffenberg.

A rise in mental health calls is “compounding” the strain on the EMS system, Nelson said.

Rachel Gonzalez, CEO of Madison Memorial Hospital in Rexburg, told the health board that her hospital has seen 50% more mental health patients than usual. Once, Idaho Falls Community Hospital had to hold a COVID-19 positive mental health patient for 32 hours to find a facility that would take the patient. Administrator Casey Jackman said the closest facility that could handle the patient was in Colorado.

Objective measures on hospital capacity in eastern Idaho aren’t readily available to the public because, administrators say, staff are a more important gauge of capacity than bed availability. Most public information about hospital capacity in eastern Idaho has come from these biweekly health board meetings, where hospital leaders have said for weeks that they’re “stressed, but managing.”

Coronavirus deaths ramped up this week in largely rural eastern Idaho, a region home to roughly a quarter-million people; each week this month, at least 10 people have died from COVID-19.

This week is the worst so far, with 17 deaths reported by Thursday, pushing the region to 90 total deaths. More large death tolls are likely to follow in the coming weeks as cases continue to rise, with an average of more than 216 cases being added daily over the past week, as of Thursday. On Wednesday night, Eastern Idaho Public Health reported 303 new cases.

Seven of eight counties in eastern Idaho are under local mask mandates and state-issued event restrictions after the regional health board on Thursday restored restrictions in rural Custer County. The board lifted those restrictions two weeks ago, during the last meeting. Board members anticipated then that cases might rise again and prompt “yo-yo” restrictions.

The health board unanimously approved the legal public health order for Custer, but this one does not include the venue-based event restrictions that others have. Health district Director Geri Rackow said that’s because Gov. Brad Little last week banned gatherings of more than 10 people with his move to put the state in modified Stage 2 of his four-step re-opening.

Officials renewed pleas that people abide by health guidelines and mandates that are in place. Board chairman Bryon Reed said the wave of new deaths is “alarming.”

“We’ve tried all year to keep our freedoms. We’ve tried to do things that would keep these numbers down and help us maintain the freedoms,” Reed said. “To go to school, to go to events, to keep businesses open, to do everything that we want to do and that we should have the freedom to do. Unfortunately, we’re now at a point to where those are being threatened. It’s so much easier to do all those small things so to keep numbers down.”

As of Thursday morning, Bonneville County had more than 45 active cases per 10,000 people for two days.

“Our resources are strained,” Rackow said. Coronavirus cases, hospitalizations and deaths are all rising, she noted. And she said public health experts are concerned spread will worsen as families gather for the holidays. “Whether it’s small groups or large groups, those types of activities are a much higher risk of allowing the disease to spread to others.”

“You can still have your family gatherings, albeit we recommend they be smaller. But keep your physical distance from those that are not in your household.”