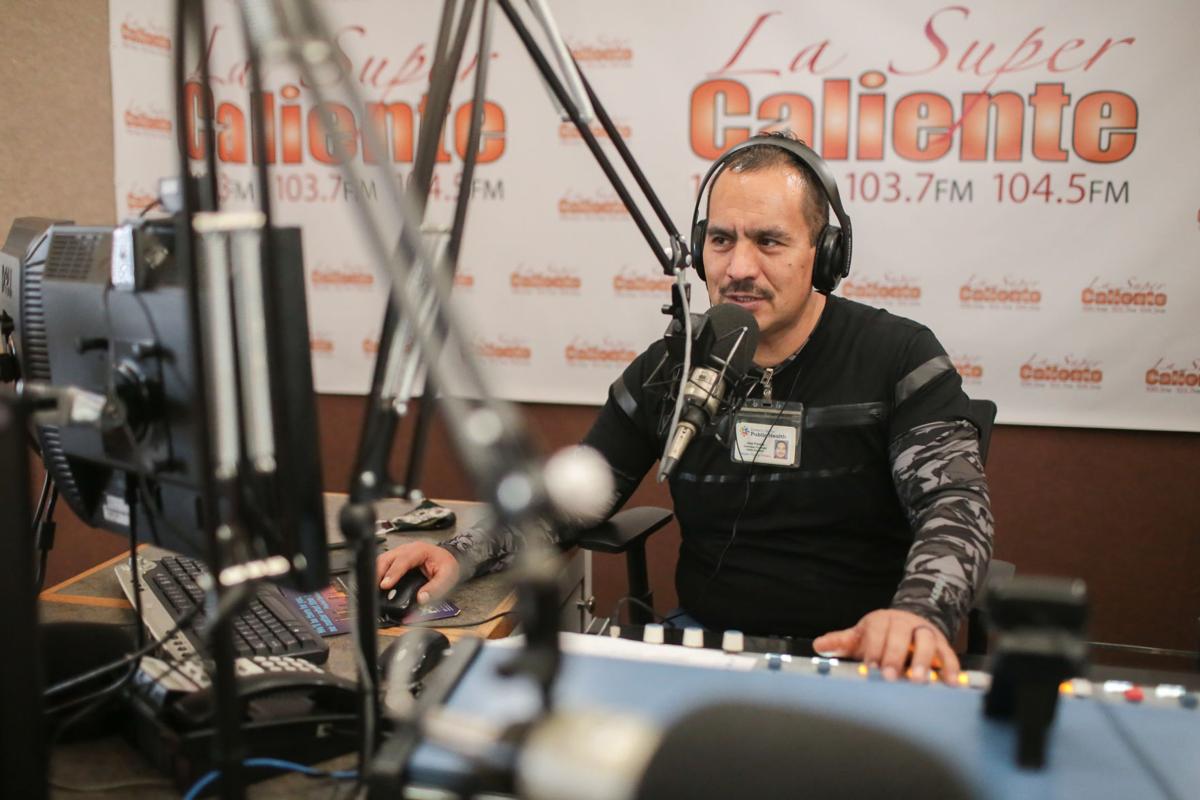 Jose Favela hosts his radio show on La Super Caliente on Thursday, Nov. 12, 2020. “God protects us. God heals us when we have faith but we also have common sense and we have to protect ourselves,” said Favela. 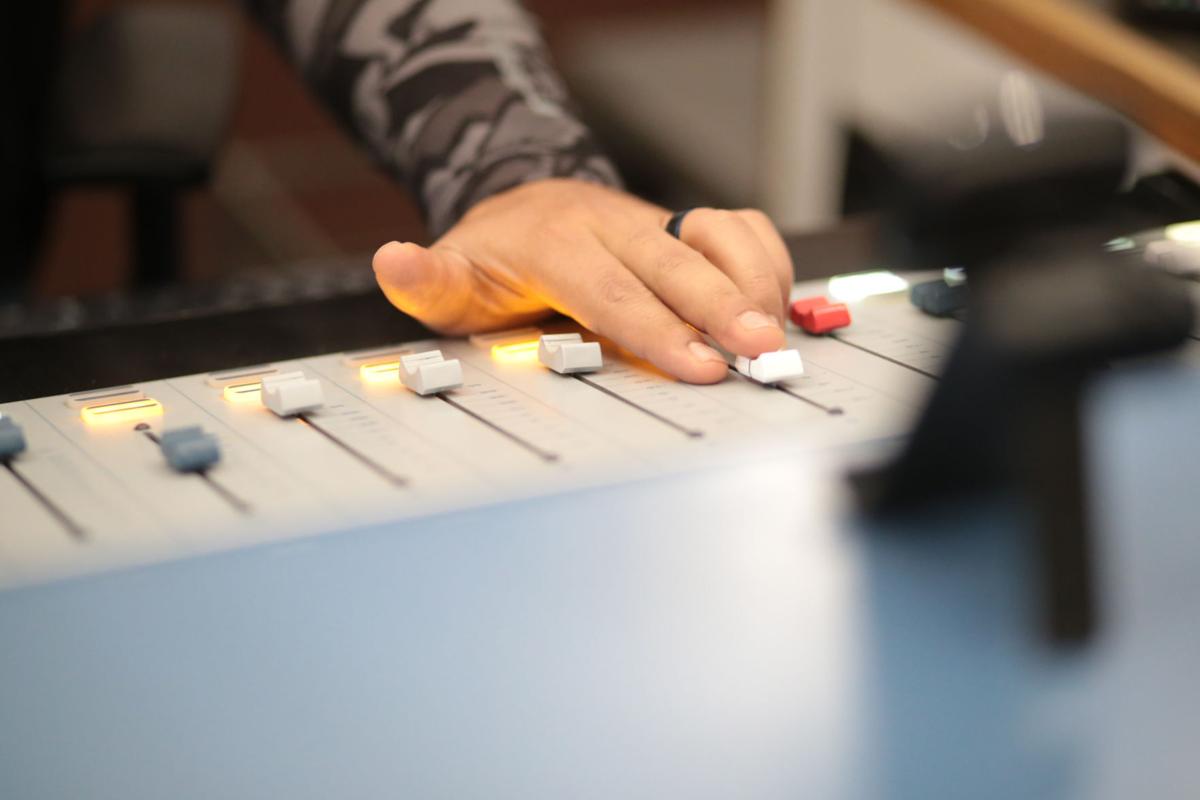 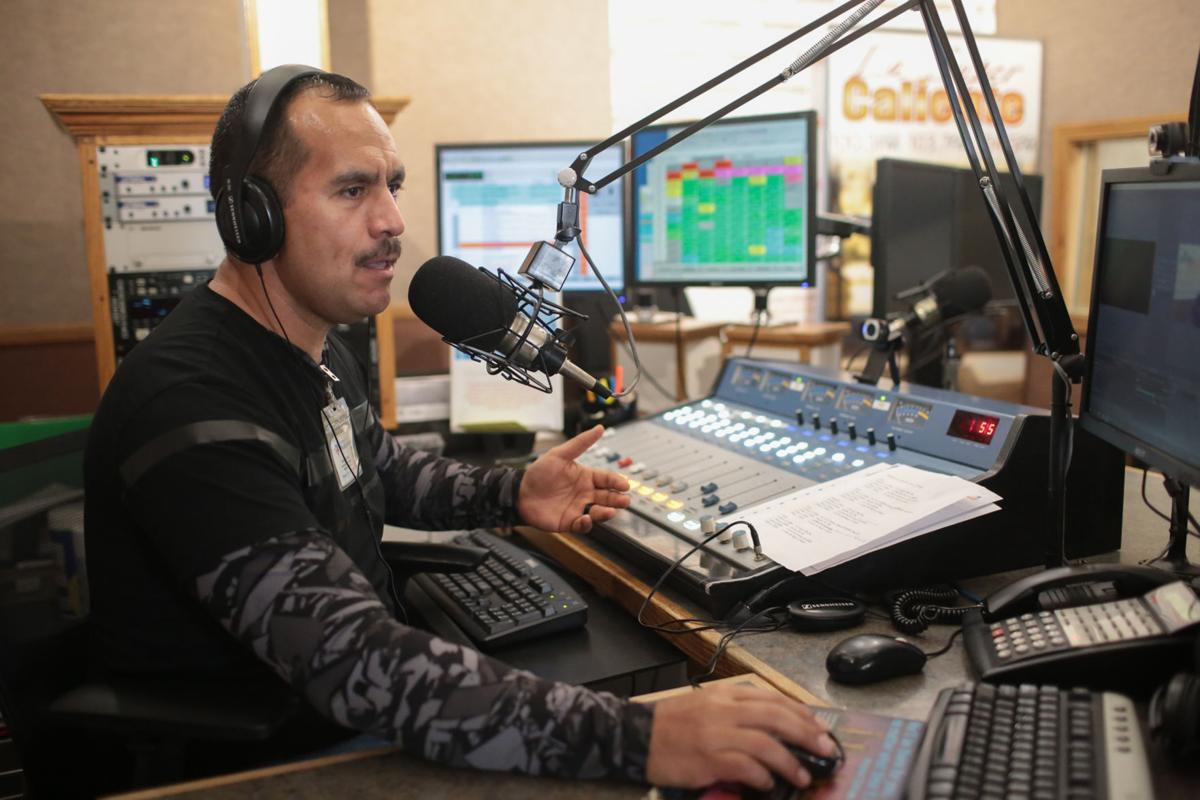 Jose Favela hosts his radio show on La Super Caliente on Thursday, Nov. 12, 2020. Favela says misinformation and gatherings such as birthday parties and dances help spread COVID-19 through the regions Latino community and he hopes his show helps educate people.

Jose Favela hosts his radio show on La Super Caliente on Thursday, Nov. 12, 2020. “God protects us. God heals us when we have faith but we also have common sense and we have to protect ourselves,” said Favela.

Jose Favela hosts his radio show on La Super Caliente on Thursday, Nov. 12, 2020. Favela says misinformation and gatherings such as birthday parties and dances help spread COVID-19 through the regions Latino community and he hopes his show helps educate people.

The day before Halloween, Jose Favela settled into his routine.

Dual computer monitors ahead, sound control board below and boom microphone overhanging, he gesticulated his arms up and down, punctuating his sentences with his hands. He flipped between English and Spanish for one of his recent daily radio shows "Un Nuevo Comienzo Radio."

"It's important that for everyone who's listening to us," Favela's daughter interrupted, translating Favela live on air, "that we all do our part."

Across the desk from him was Geri Rackow, director of Eastern Idaho Public Health. She was on Favela's radio show to explain a round of new restrictions that Gov. Brad Little had placed on the state. Favela has been supplementing his regular Spanish-language radio content, public service announcements and prayers with breakdowns of COVID-19 developments.

"There's a lot of people who don't speak English, and they need to get it from a local source," Favela said. National news outlets such as Telemundo report on the pandemic, but locally, "there's not a lot of sources where they can get the right information."

Spanish outreach about the pandemic was slow to start in Idaho, the Idaho Statesman reported in March. Heaps of information poured in rapidly as the country began to learn more about the virus. Advocates say radio shows such as Favela's have been crucial to delivering COVID-19 information in Spanish.

That's partly because audio and video are the two most consumed news mediums by Latinos, said Arnold Cantu, who oversees the Idaho Community Family Clinic, a low-income health clinic in Idaho Falls that serves a large Latino clientele.

"I think Spanish radio is probably the most effective way" to get the word out, Cantu said. "When we first started advertising our services at the clinic, that's what we utilized. And it's been pretty effective. A lot of farmworkers and people in the service industry who don't speak English listen to those."

Favela's day job is as a handyman at Eastern Idaho Public Health. But he's also been pastor of Centro Evangelistico Cristo Para Las Naciones since 2002, around the same time he began his radio show.

He spends each lunch break on air, eating something quick while he commutes between work and the radio station.

"People ask me that question all the time," Favela said. "'How do you manage to do it?' I say, 'You know what, I don't think about it. I just have this passion just to help people and just to get my family ahead, and that's what gets me up every morning.'"

Favela was recently elected as board president for Community Council of Idaho, a statewide organization that provides services for Latinos, including the clinic that Cantu runs. Spokesman Antonio Madera said the organization uses Favela's radio show to promote its public services, such as legal advice and free masks to migrant farmworkers.

"Radio is probably the best way to reach out to the Latin community. The reason being that the older generation is pretty much radio based," Madera said. What Favela does, "I think it's very very important," Madera said.

One recent service Favela promoted was Community Council of Idaho's fund called Ayuda para Nuestras Familias, or Help for our Families. Through it, families who didn't get a federal stimulus check could qualify for a one-time $500 payment. Applications are reviewed in batches. Madera said his organization expects the pool of $212,000, as of early November, to let them extend the program into January.

"We are accepting applications until we run out of money," he said.

"We're not saying that you cannot (gather), as long as you can practice social distancing and wear your mask," Favela said.

By running his show for nearly two decades, Favela said he's become a familiar voice to listeners. He hopes that can help him combat the misinformation and myths swelling across eastern Idaho about the virus and masks.

"We have a God, we have a faith, we know that he's powerful that he heals us. But he also gave us a mind, reason and intelligence," Favela said in an interview.

"God protects us when we protect ourselves, too. In this sense that we have to do what's in our power, and God will do the rest."