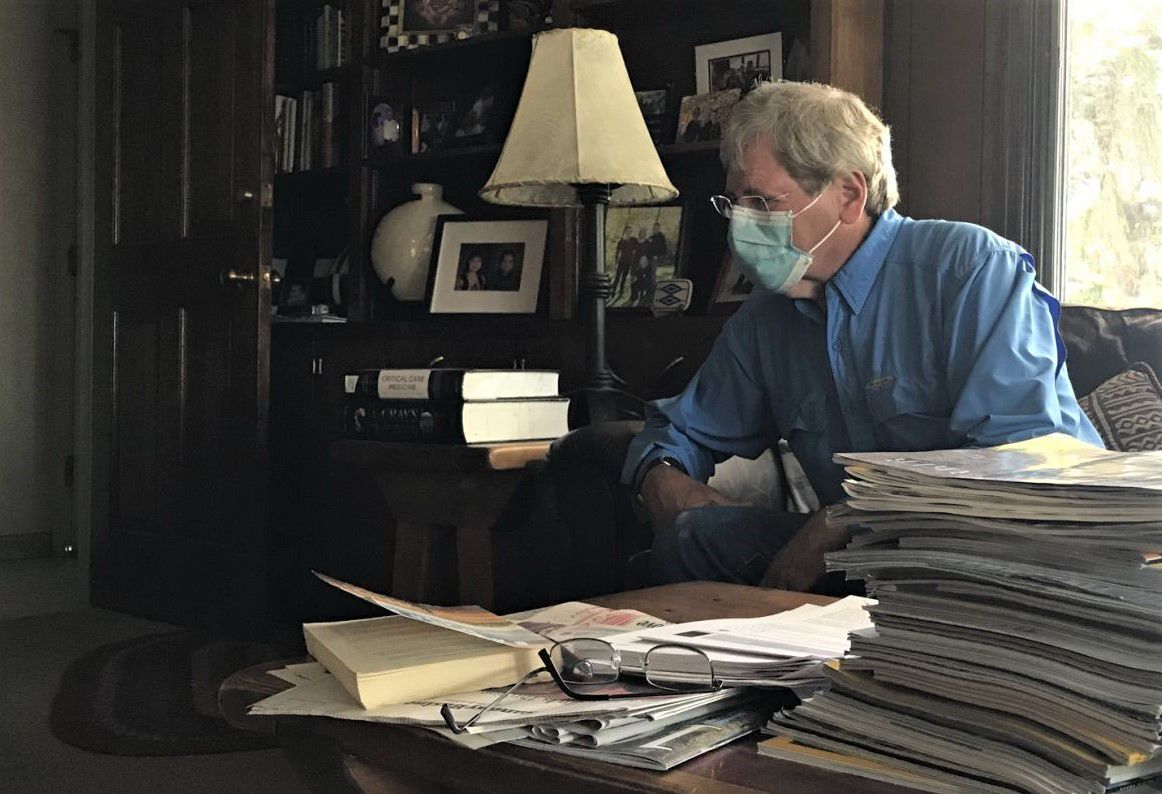 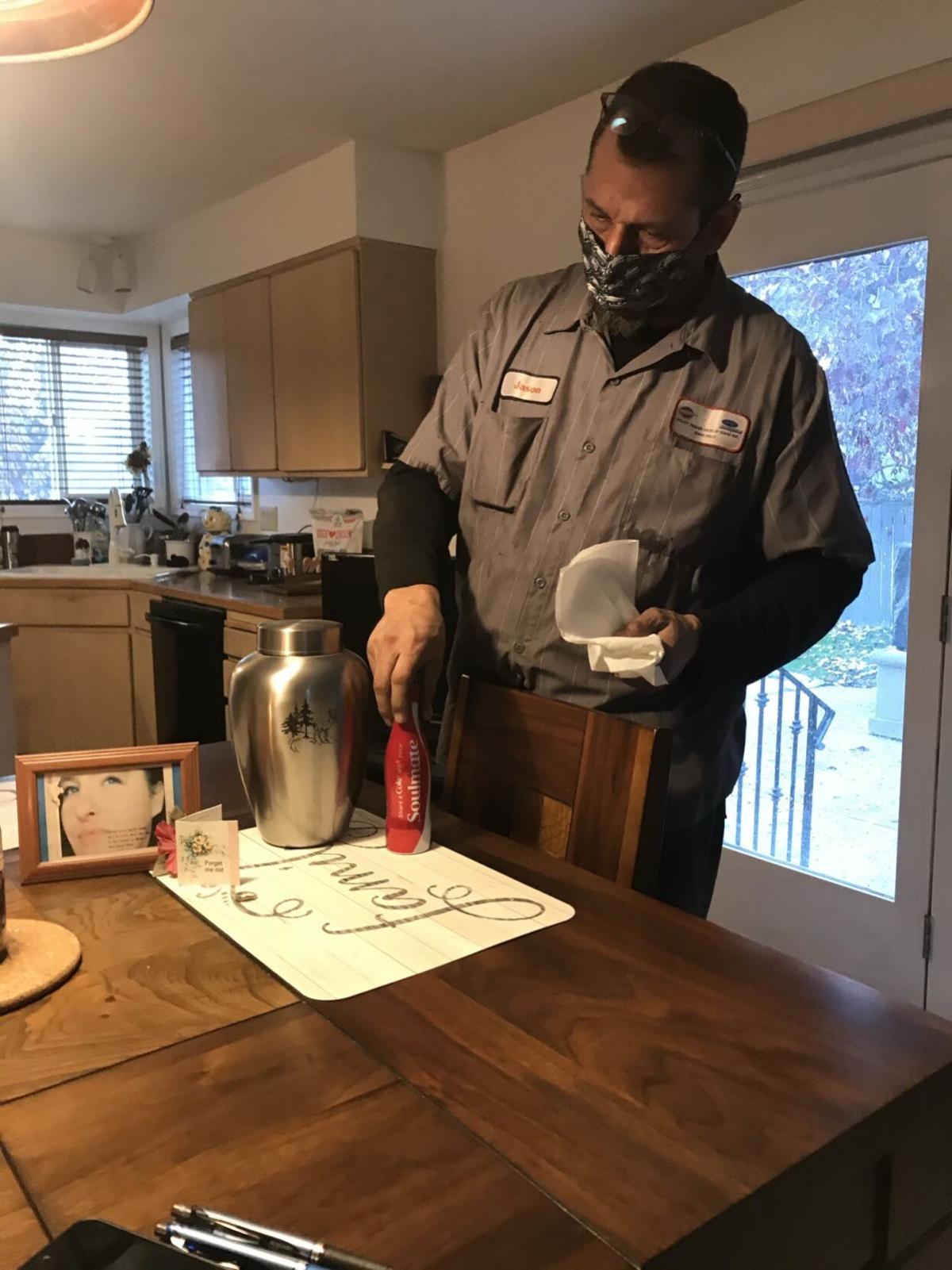 Jason Steinke displays keepsakes of his wife, Jenny Steinke, next to her urn. Jenny Steinke died in 2015 at age 36 after an asthma attack. She hadn’t been able to afford health insurance to allow her to regularly access medical care. 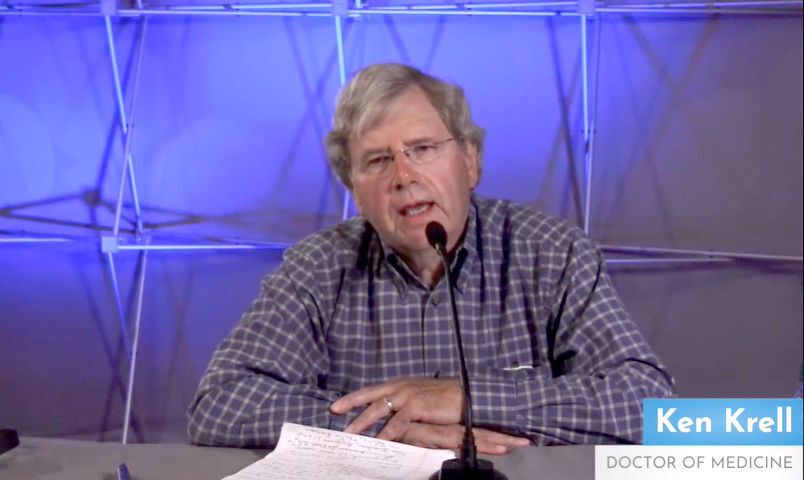 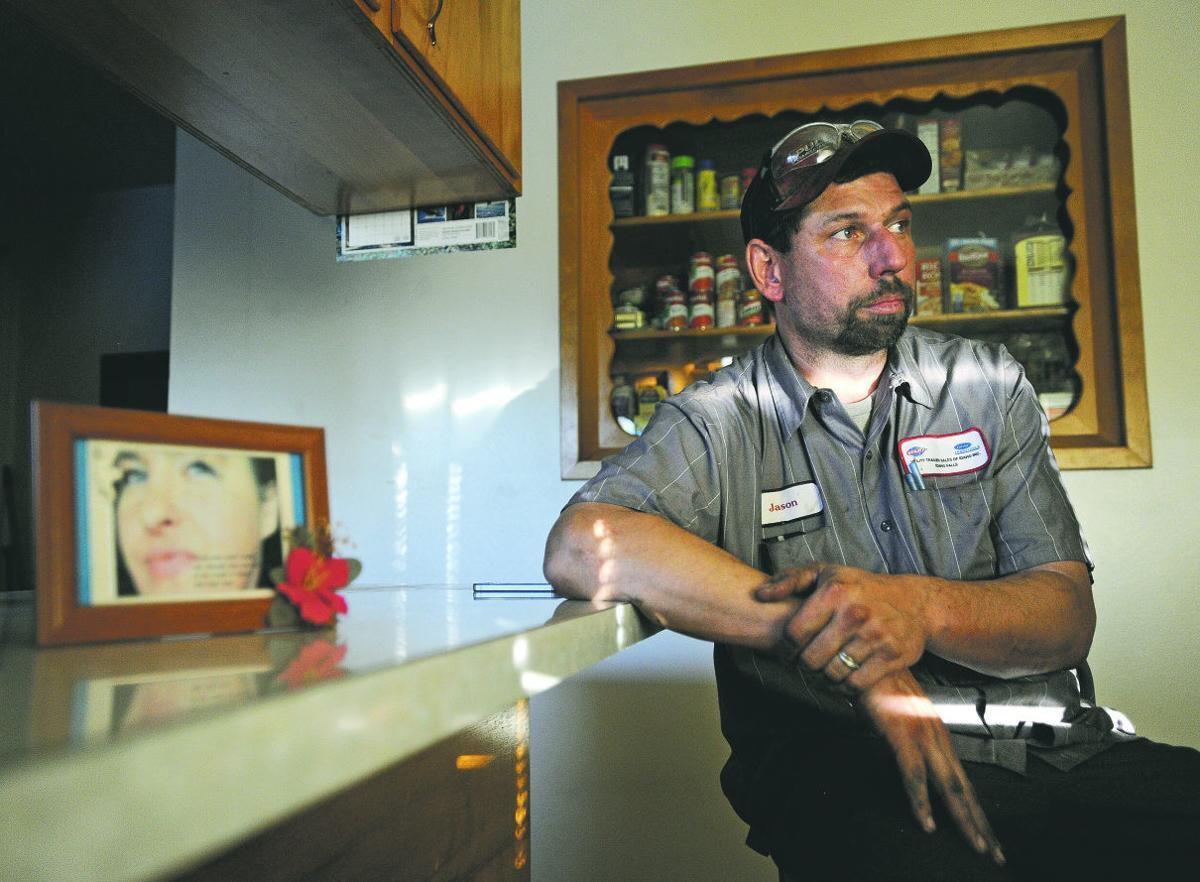 FILE - Jason Steinke poses next to a photo of his wife, Jenny Steinke, soon after she died in September 2015. Jenny’s mother in law called it “death by poverty.” Her death became a rallying call for Medicaid expansion in the state. 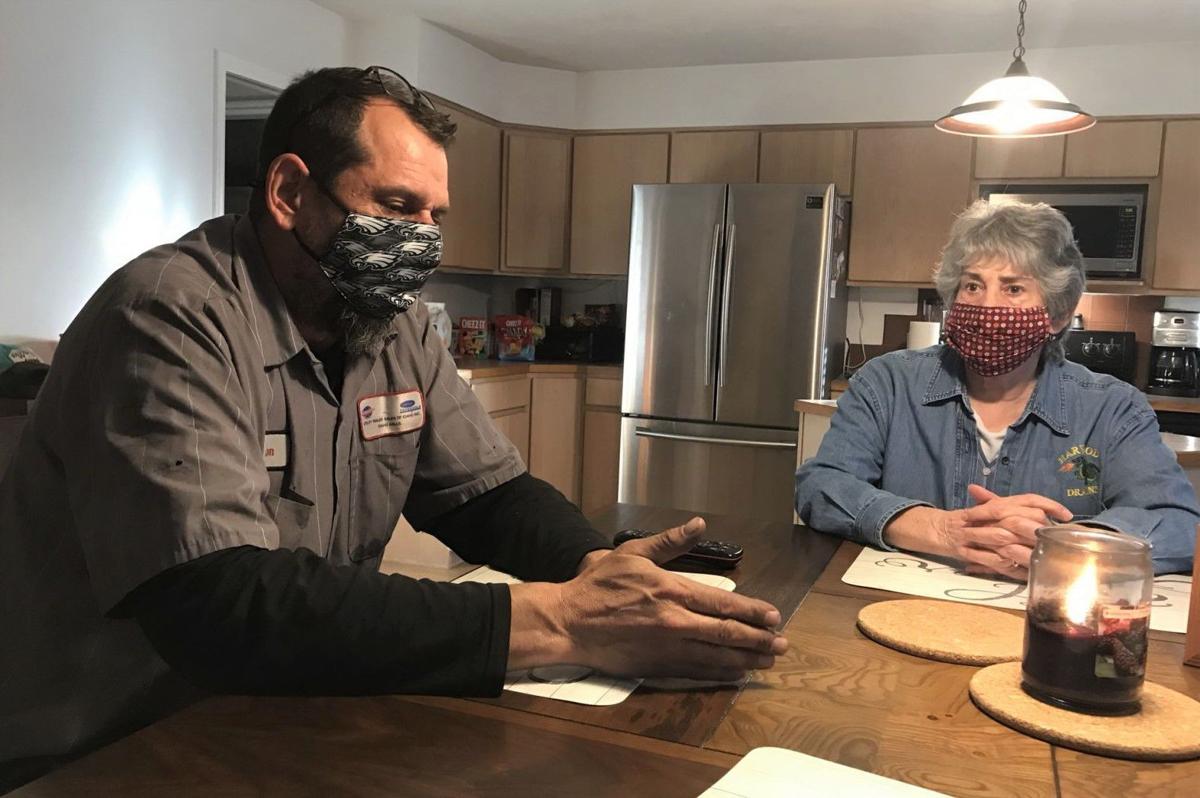 Jason Steinke, left, and his mother, Clella, recall the struggles to navigate getting health care without insurance for Jason and his wife, Jenny Steinke who died in 2015 after an asthma attack.

Jason Steinke displays keepsakes of his wife, Jenny Steinke, next to her urn. Jenny Steinke died in 2015 at age 36 after an asthma attack. She hadn’t been able to afford health insurance to allow her to regularly access medical care.

FILE - Jason Steinke poses next to a photo of his wife, Jenny Steinke, soon after she died in September 2015. Jenny’s mother in law called it “death by poverty.” Her death became a rallying call for Medicaid expansion in the state.

Jason Steinke, left, and his mother, Clella, recall the struggles to navigate getting health care without insurance for Jason and his wife, Jenny Steinke who died in 2015 after an asthma attack.

Jason Steinke's six-foot-something frame was slouched as he sat across the table from his wife’s brushed metal urn.

"It was preventable," he said of Jenny's death in September 2015.

He'd arranged Jenny next to a picture and metal Coke bottle inscribed “Soulmate.”

Jenny Steinke had struggled with asthma for nearly a decade. Like many Idahoans, she and Jason also struggled to find affordable insurance and health care. Without affordable care, Steinke resorted to short-acting inhalers. Relief waned as she used more, until her death.

Her asthma was treatable, according to the doctor who tried to save her after she stopped breathing as a neighbor rushed her to Eastern Idaho Medical Center.

Jenny was 36 when she died after spending a week on life support. Her brain had gone too long without oxygen.

Jenny's cause of death can be attributed to the asthma attack, but unofficially the cause of death was poverty, according to her mother-in-law, Clella Steinke.

Jenny’s death became a rallying call for activists in the push to expand Medicaid in Idaho, where a Republican-majority Legislature refused expansion, in part, due to concerns that state taxpayers would be left to foot the bill if the federal government no longer wanted to pay for most of the policy. The lawmakers also were wary of policies that expand government.

Clella became an advocate. Newspapers covering expansion repeated her grim assessment of Jenny's death — death by poverty. And Kenneth Krell, an Idaho Falls intensive care doctor who treated Jenny during her final days, pressed politicians along the way. Once, Krell even accused state lawmakers of killing 1,000 Idahoans by refusing to expand Medicaid.

Five years later, Krell is still in the public eye, nudging small-town public officials toward scientifically sound COVID-19 responses in reliably red Idaho — last led by a Democratic governor in 1995 — where even rarely-enforced restrictions are a hard sell.

From the start of the pandemic, doctors across the state have stepped in. They’ve become regulars at public meetings.

At first, eastern Idaho’s public health board was reluctant to issue mask mandates. A handful of doctors, including Krell, soon told the board that mandates were needed immediately.

“We don’t know how many cases we have,” Krell told the board in mid-July. “We don’t have time to wait. We simply don’t.” A spike was emerging then. Testing delays underrepresented its severity, the Post Register found.

The next week, the health board issued the first county-level mask mandate. Over the coming months — as case counts grew, died down and grew again — the board would issue, lift and re-issue mandates in all eight counties under its jurisdiction.

Half of Idahoans live in an area where masks are mandatory, according to Republican Gov. Brad Little. But compliance with health guidelines isn’t as high as experts would like. The pandemic once seemed like a far-away issue for some remote communities in the largely rural state. Several times, vocal mask critics and virus skeptics in Idaho have made headlines for defying public health restrictions. A few instances have led to arrests.

After issuing a statewide stay-home order in late March, Little began reopening the state in early May and inched the state through his four-stage reopening plan this summer. He removed virtually all statewide restrictions, handing off most pandemic control to regional health officials.

As hospitals across the state fill up lately, Little has restricted large gatherings and deployed the National Guard to mitigate hospital staff shortages. But he continues to refuse calls by health care leaders for a statewide mask mandate, saying that local responses are better.

Idaho is routinely listed in the “red zone” by the White House Coronavirus Task Force. Hospitals from all corners of the state have had full ICUs last month. And Idaho, home to less than 2 million people, has had about as many COVID-19 deaths as Oregon, with more than 4 million people.

Krell pleaded with Little in a letter he co-signed with 10 other Idaho hospital disaster planners in early November: “We strongly implore you, we beg you, to take the courageous step of immediately instituting a statewide, enforceable masking mandate,” they wrote.

In many ways, Krell’s demeanor today mimics the tone he struck while he pushed lawmakers to expand Medicaid.

In February 2016, five months after Steinke died, Krell stood before a state Senate committee. He told Idaho lawmakers that, by refusing to expand Medicaid, they killed about 1,000 Idahoans over three years.

Krell cited a New England Journal of Medicine report that compared states that accepted Medicaid expansion with a neighboring state that did not. The study found that the failure to expand Medicaid cost 19.7 lives per 100,000 population. He ran those figures for Idaho and estimated that was about 324 lives a year.

"Nearly one patient per day dies in this state as a result of not having Medicaid expansion," he told the Legislature at the time. "And that’s a direct result of that failure to obtain care at a stage when the disease process could be treated effectively and not only death, but hospitalization and illness prevented.”

“Jenny’s case for me really crystalized what’s wrong here,” Krell continued. “And I kept asking myself, ‘How could this be? How could, in a state like Idaho where we care about each other, could I be seeing deaths and really damaging illness on a nearly daily basis?'”

He rattled off possible reasons against Medicaid expansion — a state policy, which the Affordable Care Act encouraged by offering almost all the funding for, that raises the income cap for Medicaid eligibility from 100% of the federal poverty limit to 138% of the federal poverty limit. Krell said he could only come to one “inescapable” conclusion.

“That the Idaho Legislature is unfortunately responsible for those deaths,” he told lawmakers. “Our intransigence, in failing to pass Medicaid in for the last three years, has probably resulted in over a thousand deaths in this state.”

The committee chairman told Krell that if he or others lobbed accusations, he'd be gaveled down.

Krell’s remarks continued throughout the push to expand Medicaid. That fight culminated in November 2018, when 60.6% of Idaho voters approved expansion via the state's initiative process after lawmakers failed to do so. It took effect this January.

Weeks later, Krell and other doctors were faced with a new health crisis: the coronavirus pandemic. Responding to the virus through restrictions seemed politically fraught to some, but evidence kept emerging on the success of mask mandates.

“I don’t know how to keep my mouth shut,” he said in a recent interview.

Following that push to get Medicaid expansion on the ballot in 2018, the first policy passed directly by Idaho voters in more than a decade, Krell seemed bittersweet in his celebration.

“It’s been three more years. That means another 1,000 Idahoans have died,” Krell said at a February rally. “But we’re about to put an end to that.”

Insurance had always been out of grasp for the Steinkes. They didn’t make enough to qualify for tax credits on the state health insurance exchange, but they made too much to qualify for Medicaid. Activists have coined that “the Medicaid gap,” and estimated 59,000 Idahoans were in it.

More than 90,500 Idahoans have enrolled in Medicaid through the expansion, the Idaho Press reported last month, with part of the demand driven by the pandemic as many more residents sought public assistance after they lost jobs.

But the Steinkes aren't among them.

Just before Jenny died, Jason began a job with benefits. His insurance policy became effective Sept. 1, 2015, the day Jenny was rushed to the hospital. But it was too late.

Kyle Pfannenstiel covers rural healthcare in eastern Idaho for the Post Register. This dispatch is part of a series called “On the Ground” with Report for America, an initiative of The GroundTruth Project. Follow him on Twitter: @pfannyyy