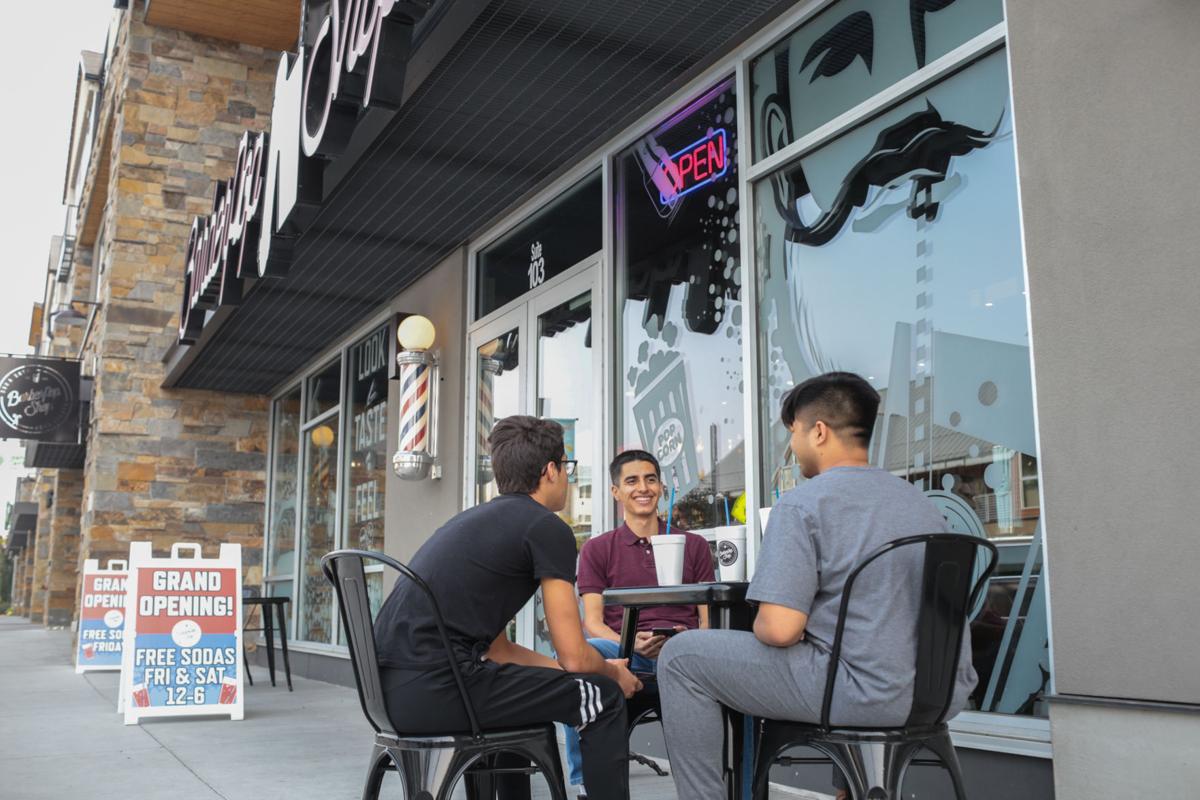 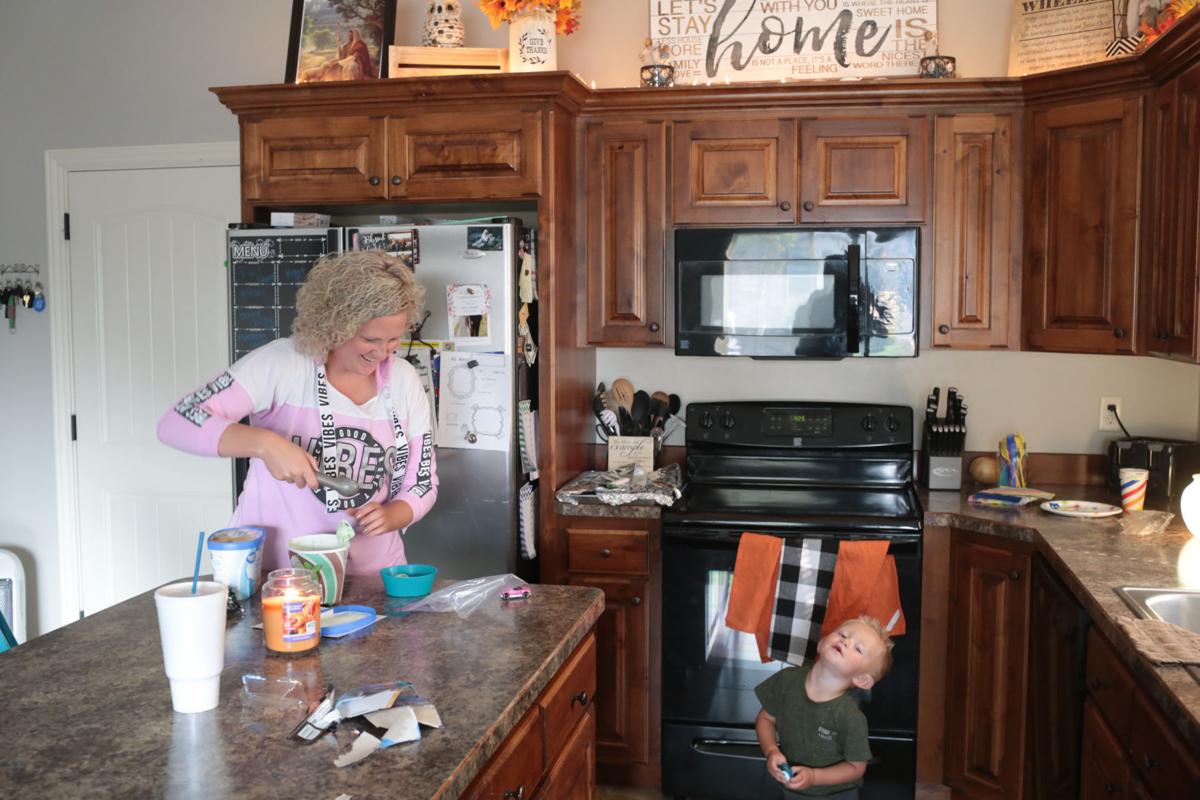 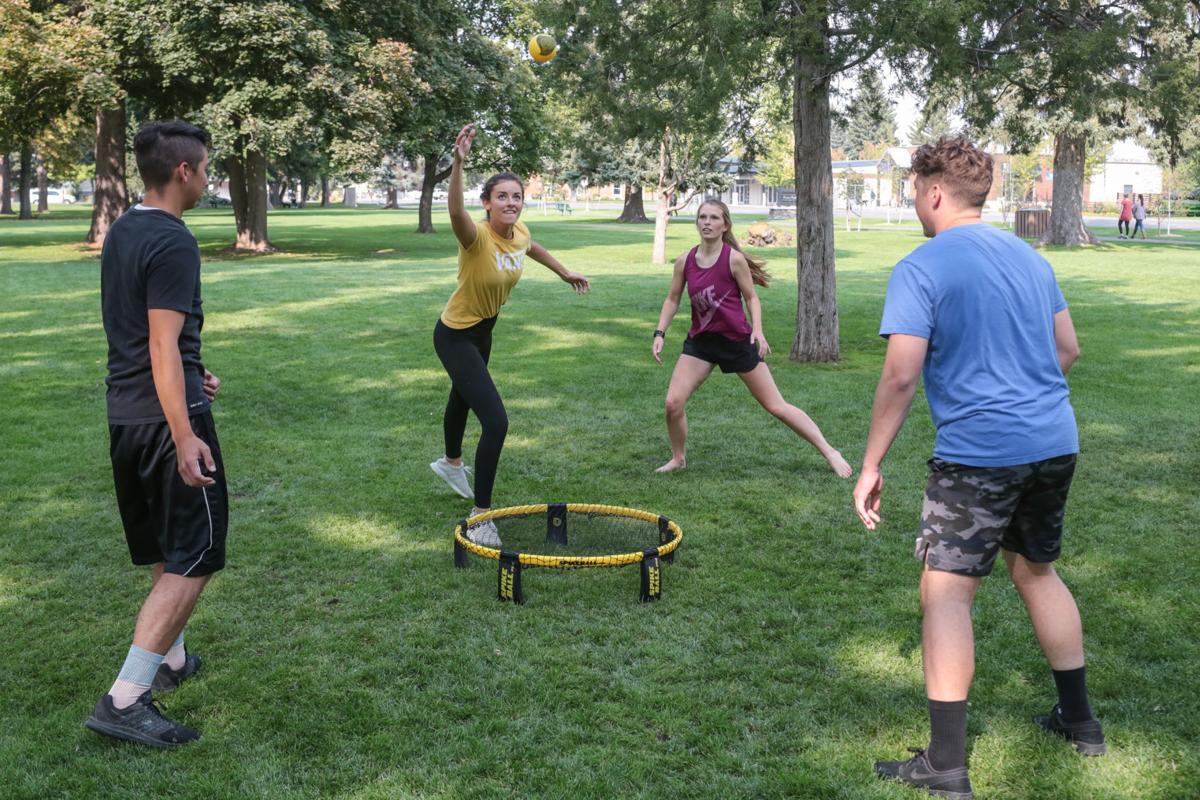 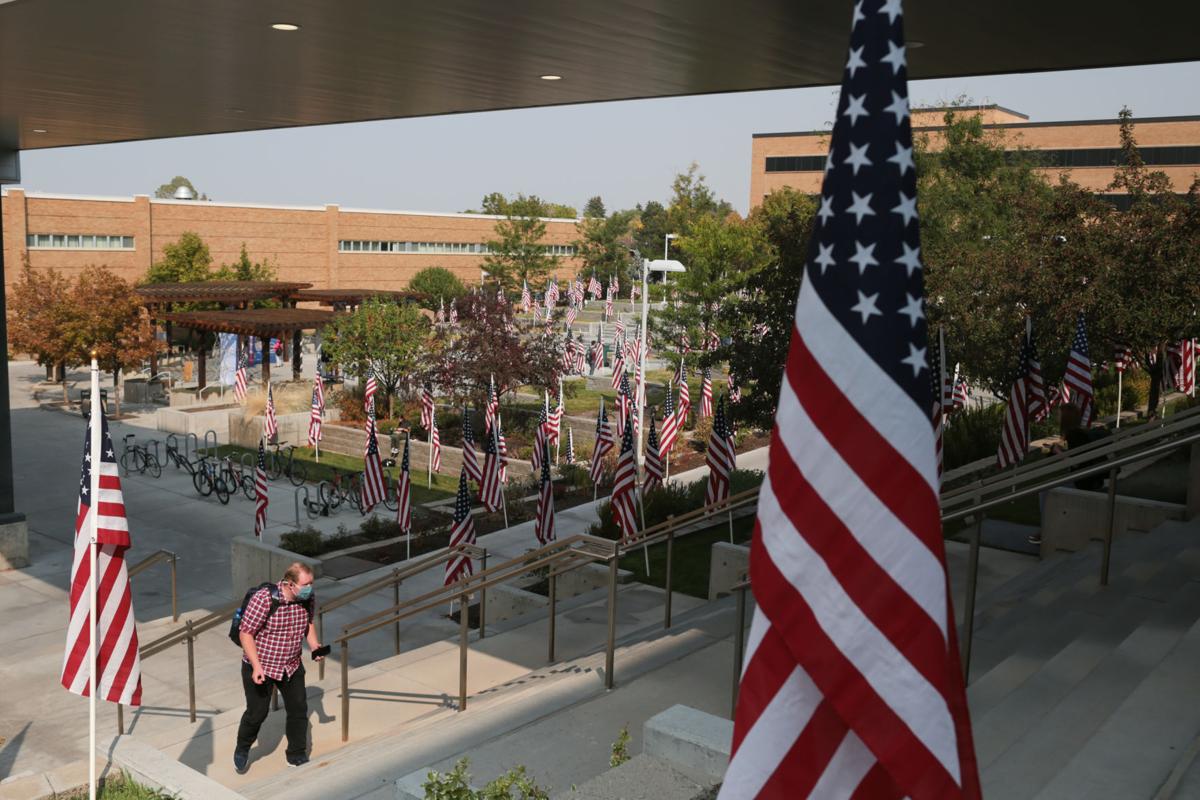 A mask-wearing individual is pictured at Brigham Young University-Idaho in Rexburg in September. 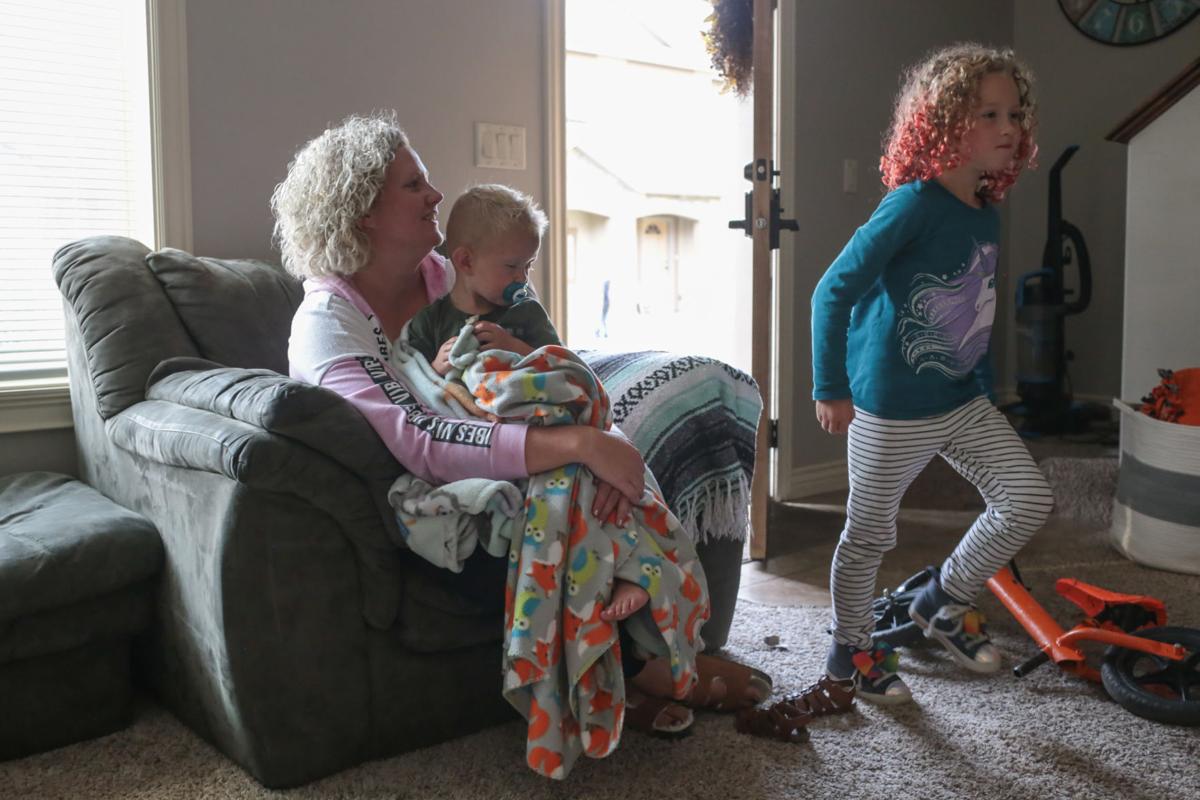 Amber Wheeler holds her son Bentley, 2, as her daughter Paizley, 6, comes in for ice cream in Rexburg on Thursday, Sept. 17, 2020. 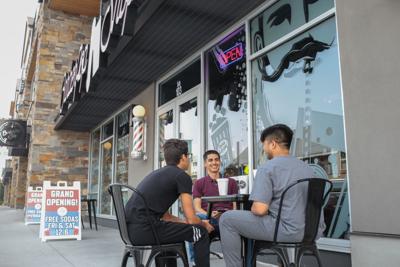 Amber Wheeler holds her son Bentley, 2, as her daughter Paizley, 6, comes in for ice cream in Rexburg on Thursday, Sept. 17, 2020.

REXBURG — Throughout July and August, every county in eastern Idaho surrounding Madison was yellow, or at "moderate risk," at one point or another.

That meant the virus spread enough that regional health officials mandated masks and slightly restricted events there. Madison stood out — the only county that had stayed green, or "low risk," for good. Cases were low there.

Brent Mendenhall, who represents Madison County on the regional health board, told the Rexburg Standard Journal some health experts called it the "doughnut hole."

"It stuck with me. I just smiled about that, but not so much smiling these days," he said in interviews with the Post Register.

What once was a rare coronavirus coldspot in eastern Idaho has bubbled, in just a week, into one of the state's worst hotspots after thousands of children and college students waded into classrooms in the seat of a county that, until Monday, Sept. 14, didn't have any restrictions on social interaction.

Madison's ballooning caseload isn't out of line for the region. But it came later, and sharper, than in most other counties. And now, eastern Idaho's three most populated counties — Bonneville, Jefferson and Madison — are in the state's ten worst hotspots, or counties with the most new cases this week per capita.

Cases surged starting in July for eastern Idaho, pushing the total number of cases from just a few hundred to around 3,500 now. During that time, Madison County's total cases inched upward, but they only began careening days after Labor Day. As of Friday, Madison had the third-highest rate of spread in the state. (The two counties with higher rates of spread have around 1,000 residents each, so their per capita rates wildly fluctuate from just a handful of cases.)

"Certainly the number of (case) increases corresponds with school re-opening," Corbett said, but it's "difficult to say for sure as we don't have direct" links for those cases.

So far, the restart of classes by Brigham Young University-Idaho in mid-September does not seem to be driving the spike, according to the Post Register's review of reporting by the university and Eastern Idaho Public Health. Prior to September, residents between the ages of 18 and 29 made up nearly half of the cases reported to Eastern Idaho Public Health. This month, less than a third of Madison's total cases are part of that age group.

The college requires masks, and the campus just recently got a drive-up testing site with rapid antibody tests. But it's too early to tell how reopening will contribute to the spike. Impacts of social interactions on case counts aren't known for weeks, due to lag time in people experiencing symptoms, seeking tests and receiving results.

Madison County is home to about 40,000 people, Census estimates say. University spokesman Brett Sampson said he couldn't provide enrollment figures for this year. Corbett said at the Sept. 14 health board meeting the university is expecting 16,000 to 17,000 students, about 9,000 to 10,000 of which return from elsewhere after the summer ends.

"It was here before they got here," Mendenhall told the Post Register. "Now what happens from here, I'm really watching that because I do think they will contribute to an increase. They just have to."

"If we don't explode, it'll be a testament to BYU-Idaho. That they are getting to their students and saying: 'Listen, even out in public, down in town as the old movies would say. If you go down in town, be aware, it's not just a campus thing.' If we can hold back, I think we can show we can control it."

Madison School District opened with a tiered reopening plan. Online for families who want, and in case kids have to isolate. Most kids have opted to go back to school, where assistant superintendent Randy Lords said custodians clean rigorously and desks are spaced apart.

The district didn't require masks before the surge brought a mandate by the regional health board. A county-wide mandate didn't change things for the district; some school districts and many law enforcement agencies have said they won't enforce legal mask mandates.

"What we believe in is informing and educating. We want kids in school, and so we want to encourage them," Lords said. If a third-grader takes their mask off partway through the day, "we're not gonna kick a kid out of school for that. We understand (masks) are effective, but when you start to enforce and kick kids out of school for things. Again, it goes back to we really want kids back in school."

Amber Wheeler's oldest, Paizley, 6, is a first-grader at one of the district's elementary schools. Wheeler said her daughter's classmates will wear masks when they gather for a reading circle. Wheeler's four-year-old, Oakley Krew, goes to a private pre-school in town.

"They're four and five years old, so they're not gonna wear a mask," Amber says.

She's not a fan of mask mandates and thinks "it's ridiculous." Her mother-in-law had COVID-19 a few months earlier and didn't show severe initial symptoms. (That is common for most people, though long-term effects of the disease are unclear.)

Wheeler propped her 2-year-old, Bently, on her lap, as her 4- and 6-year-old played outside, where kids in the neighborhood were playing with each other, riding bikes, huddling inside a blanket fort.

"I haven't really changed how we're living just because there's this huge pandemic going on," Wheeler said. "I know there were a lot of people freaking out about school re-starting. I was so excited because I wanted my kids back to something that was normal, back in routine."

Donald Diaz, Rafi Monilla and Erick Marrufo sat around a cafe table outside a new two-in-one soda and barbershop a few blocks down from BYU-I. They're all in their first year at the college. They live together in a nearby apartment.

"I did want to take them on campus, so that kind of sucked," Diaz said. "... You can't really socialize in classes on Zoom."

Monilla's been here all year, since last September. Diaz and Marrufo just got back this month.

"I think everybody just wants to go back to class," Marrufo said.

Not much has changed from before the pandemic, Diaz said, but it doesn't feel normal.

"Honestly right now, it's like nothing really happened," Diaz said.

"We pretty much do everything. We go to the park. We play sports. I mean they sometimes still have parties, house parties and stuff. I can't really think of anything that changed ... other than opportunities to make friends in classrooms. That's about it," Diaz said.

Editor's note: This article has been updated to correct information about which color is associated with the coronavirus risk level "moderate risk."