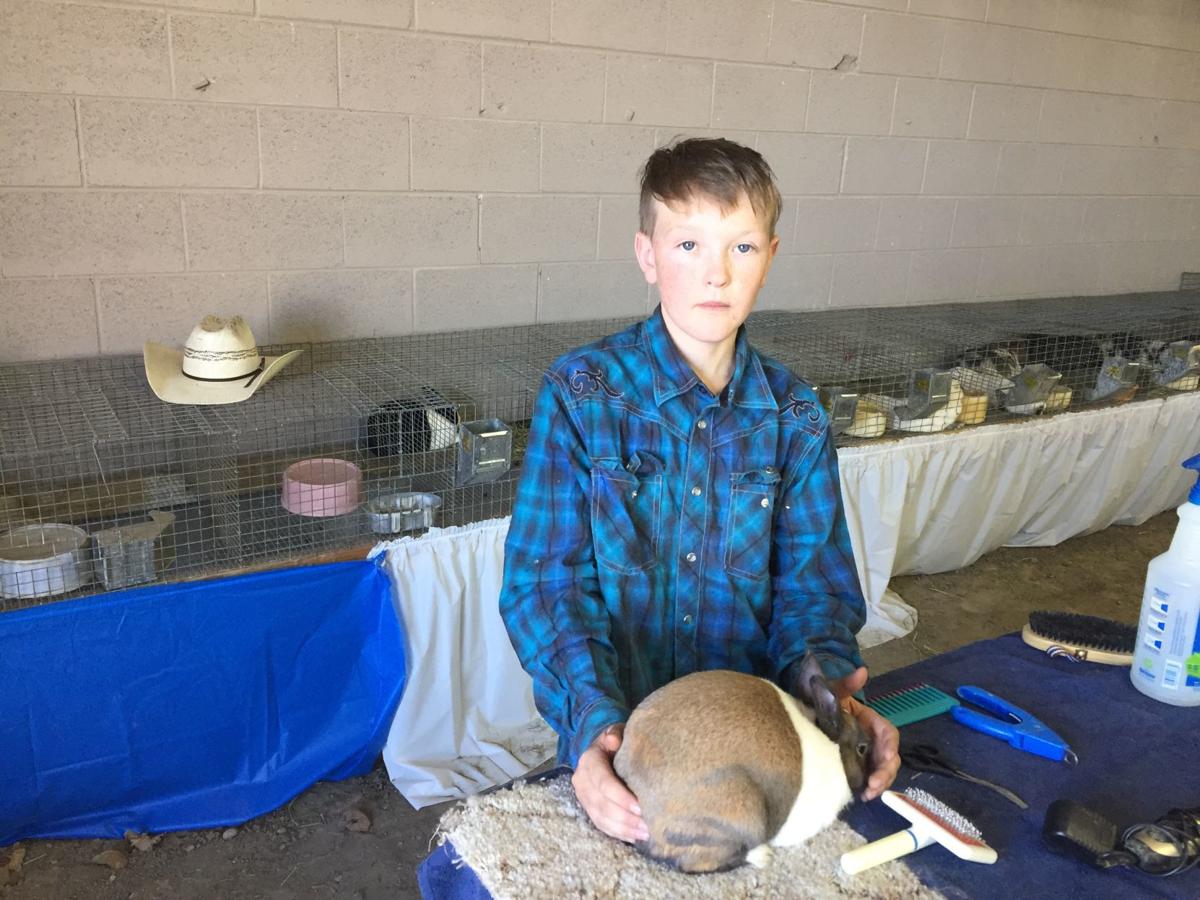 Hunter Owens, 14, poses with his Dutch rabbit, which won second reserve at the Eastern Idaho State Fair, during the fair on Saturday. Hunter showed 20 rabbits in the fair and raises several different animal species at his Bancroft home. 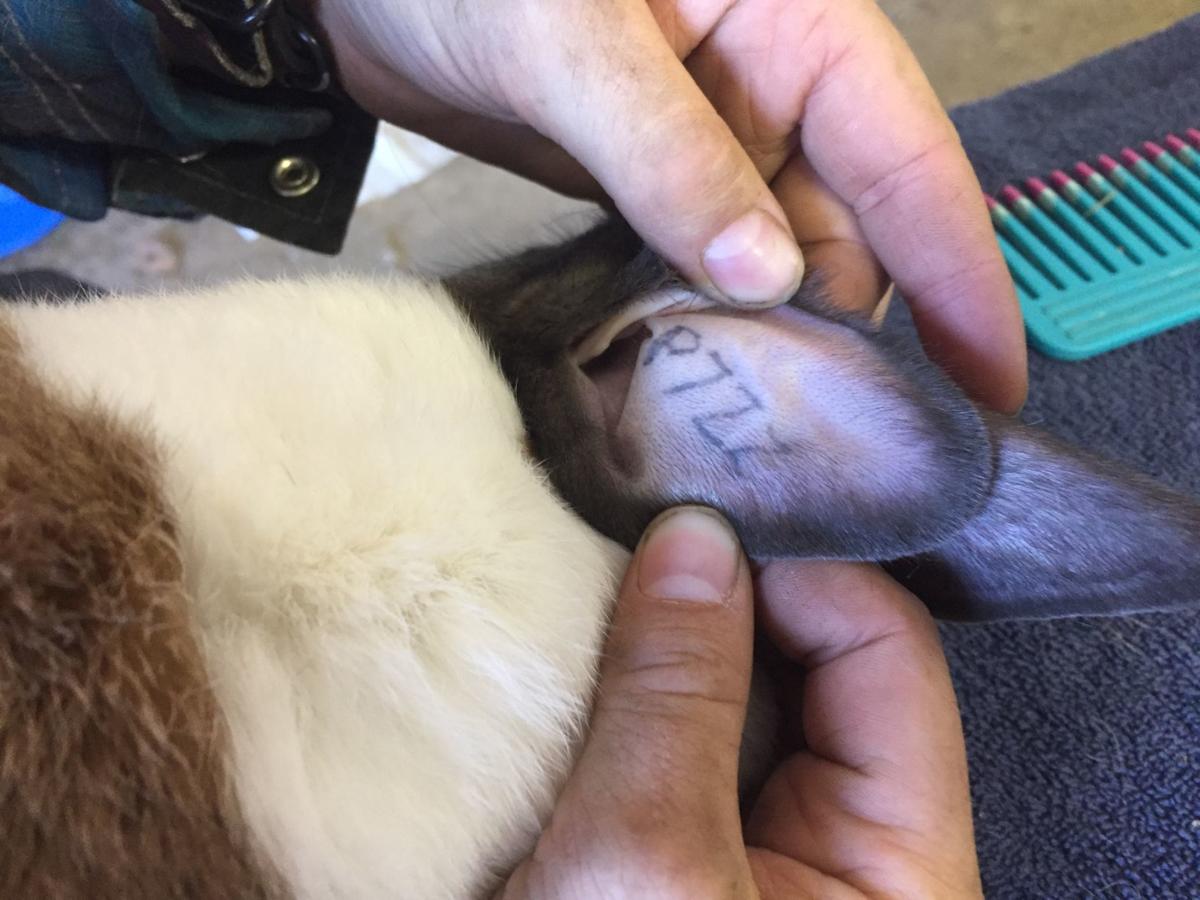 Hunter Owens shows the ear tattoo on his Dutch rabbit. An ear tattoo is a requirement for a show rabbit to be papered. 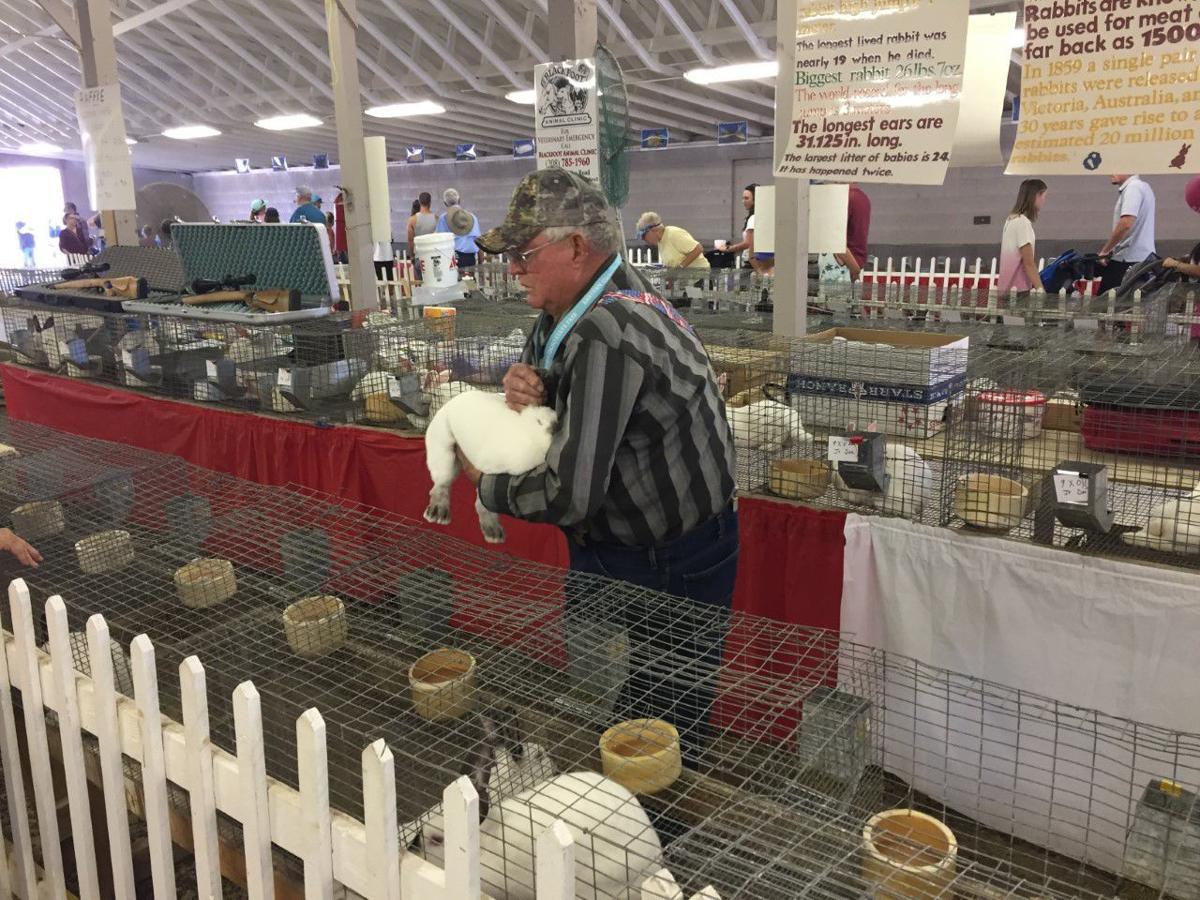 Hunter Owens, 14, poses with his Dutch rabbit, which won second reserve at the Eastern Idaho State Fair, during the fair on Saturday. Hunter showed 20 rabbits in the fair and raises several different animal species at his Bancroft home.

Hunter Owens shows the ear tattoo on his Dutch rabbit. An ear tattoo is a requirement for a show rabbit to be papered.

BLACKFOOT — Hunter Owens is a 14-year-old with a business card and his own “hedge fund.”

The North Gem High School freshman’s passion for breeding and raising show animals earned him recent glory at the Eastern Idaho State Fair, while also laying the groundwork for his own small business. He makes a modest income from selling show animals, offering purebred chickens, pigeons and rabbits to regional 4-H youths.

Hunter, who has also supplied inventory to McKee’s Feed, Garden & Pet Centers in Chubbuck, is now gearing up to sell purebred ducks.

Hunter keeps his business card on hand in case he meets a potential client — it reads, “Hunter’s Hoppers: Ask Hunter about the different breeds.” He jokingly refers to his business profits as his “hedge fund”: Most of it came from breeding and selling hedgehogs. For the moment, his major focus is on breeding rabbits.

“I just give them a business card and they can call me and get an order in for whatever type of rabbits they want,” Hunter said. “With some of them, I’ve gotten kids started in 4-H.”

On Sunday at the fair, Hunter found strength in numbers, entering 20 rabbits representing several breeds in the judging competition. His rabbits won first and second reserve ribbons, as well as ribbons for best of breed, runner-up for best of breed and honorable mention.

Aside from filling his trophy case, the boy’s intense focus on raising animals has provided him with a constructive activity as he’s coped with severe health challenges.

Diagnosed with type 1 diabetes and in remission for throat cancer, Hunter was granted a trip to Disneyland through the Make-A-Wish Foundation. When he heads to the theme park next spring, his “hedge fund” will cover costs of his entire family joining him.

“Hedgehogs are really, really hard to manage,” Hunter explained, adding he recently sold his last hedgehog. “I made a lot of money off of them. A baby can go from $500.”

Hunter puts in long hours caring for the animals in his personal petting zoo, comprising a chicken coop and a cage-filled shed, equipped with a special watering system, which he calls the Bunny Barn.

Hunter makes a point to tend to his animals during the early morning hours and spends additional time caring for them each evening. He also heads home from school each lunch period to check on the animals.

“I’ve been raising animals for all of my life really, working with my grandpa on his farm,” Hunter said. “I don’t go and play video games; that’s for sure.”

Raising bunnies is growing into a good business for Hunter, who once sold a top rabbit for $110. He breeds only show rabbits, reasoning a show rabbit can make a good pet but a typical pet rabbit won’t turn a judge’s head.

Hunter explained show rabbits are judged largely on the perfection of their color patterns. His Dutch rabbit, for example, had a clear band separating its white fur from dark fur and a triangular blaze from the nose to between its ears — both characteristic of the breed.

“Sometimes you can get lucky and breed the best to something that’s good and get something greater,” Hunter said. “It’s really a gamble every time you do it.”

All of his rabbits are papered. He can trace their pure genetics back to their great-grandparents, and all of the rabbits in the lineage have special ear tag tattoos. Hunter has a hand tool he uses to administer his own ear tattoos.

Hunter was lucky enough to find a mentor, Lawrence Weeks, who has helped him learn the art of breeding and showing rabbits. He calls Weeks, a rabbit judge he met at the Caribou County Fair, about once per month for tips of the trade.

“He’s a pretty good young man,” Weeks said. “I try to give him advice. I really try to help him.”

Weeks’ mantra to Hunter has been for the boy to scale back on the scope of his breeding program and specialize in a few key breeds.

“He’s got some good stuff but he’s got too many different varieties,” Weeks said.

Hunter’s father, Joshua Owens, believes tending to so many animals has taught his son responsibility and accountability. He also believe his son has improved every year at breeding champion animals.

“He’s lost a few (animals) and it broke his heart, but he knows that’s part of life,” Joshua said.