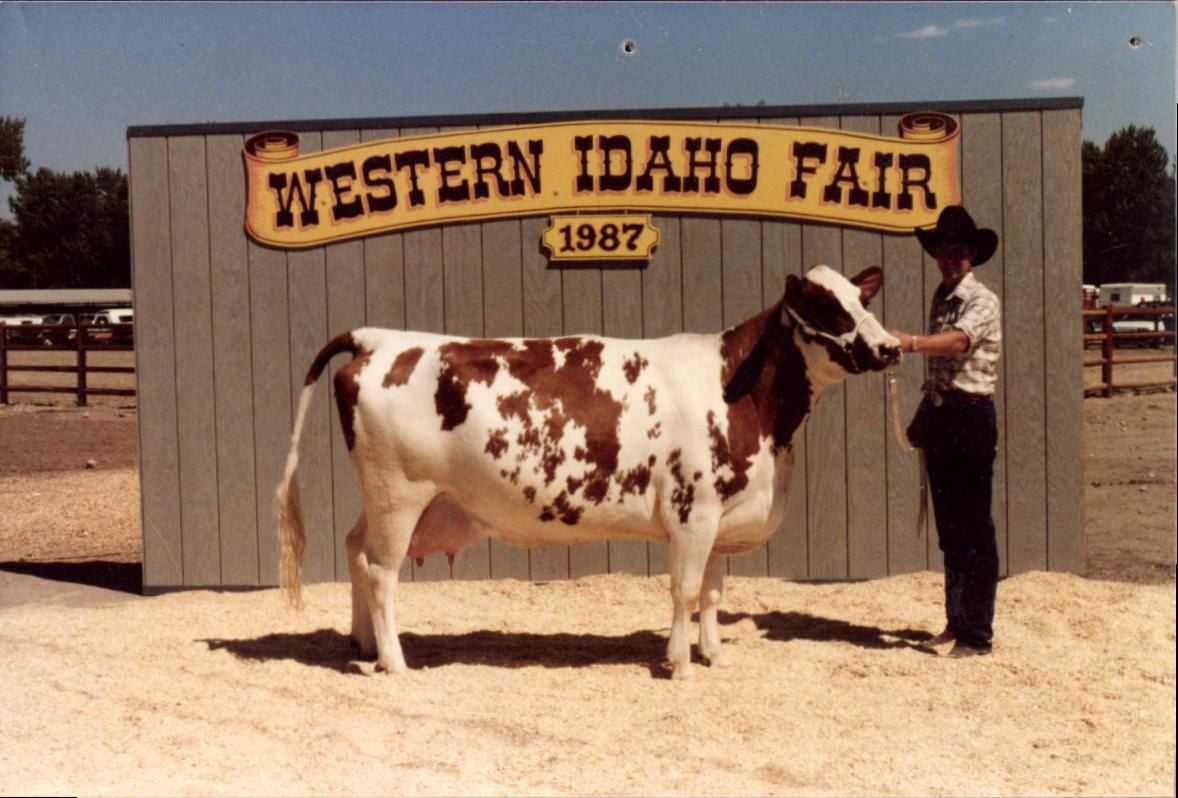 Hans Bruijn showing one of his dairy cows, years ago. 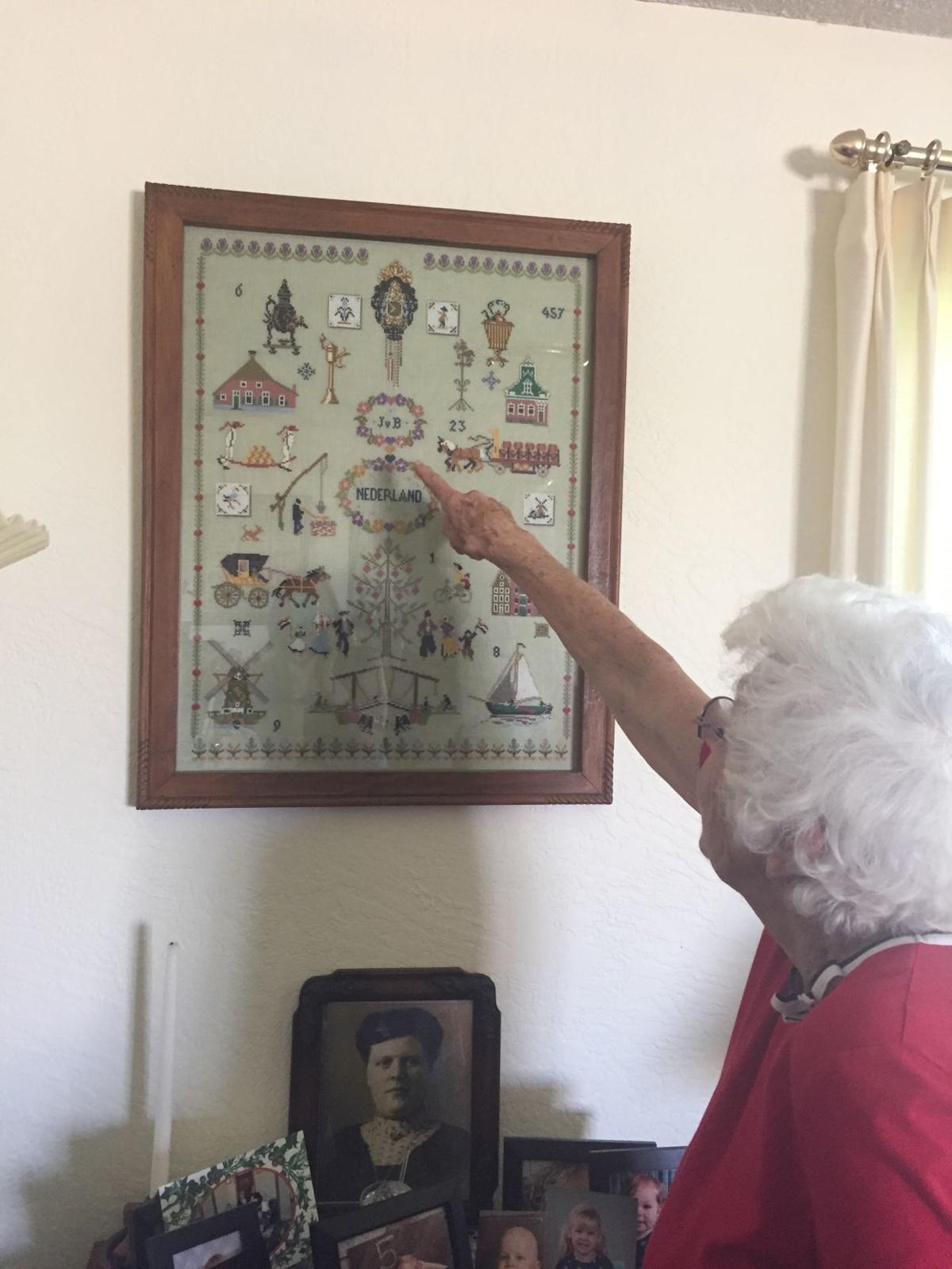 Dora Van Beek points out a cross stitch that is all about their Dutch heritage. 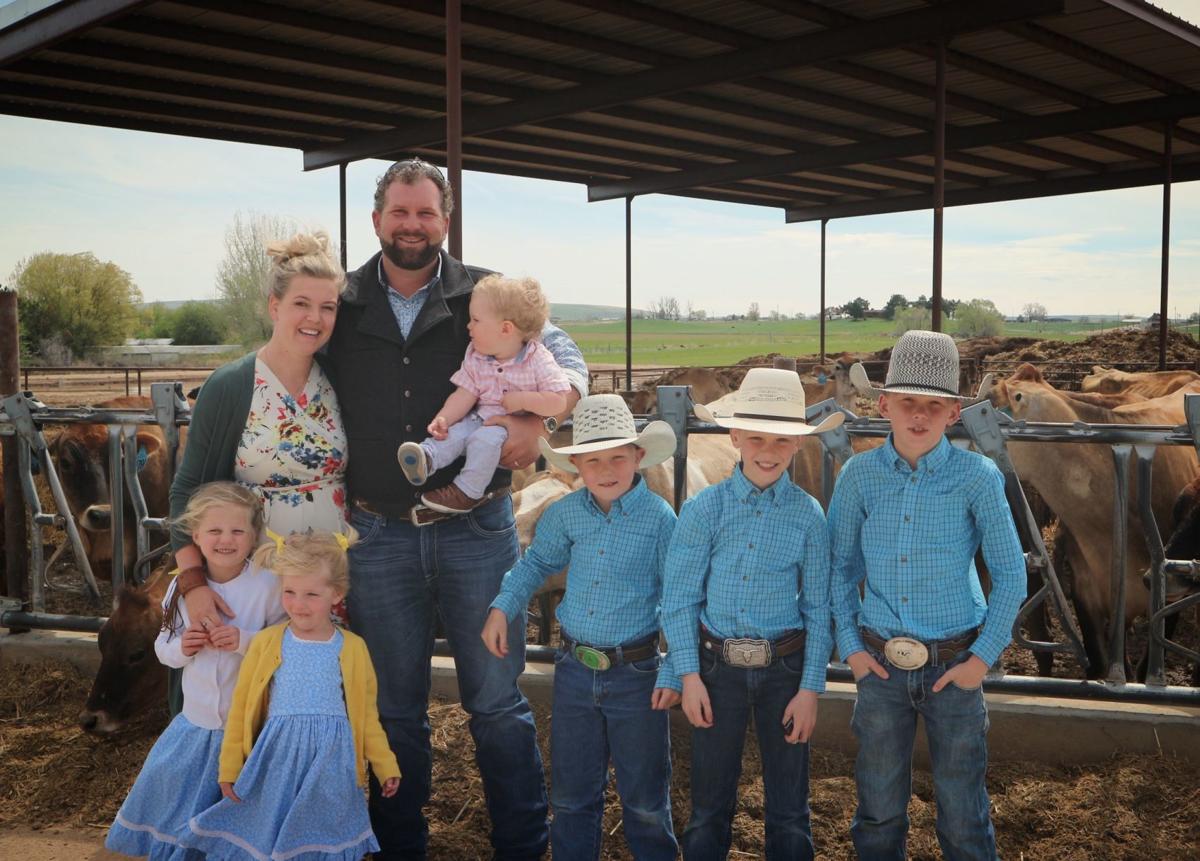 Rudi and Anne DeWinkle and their kids. 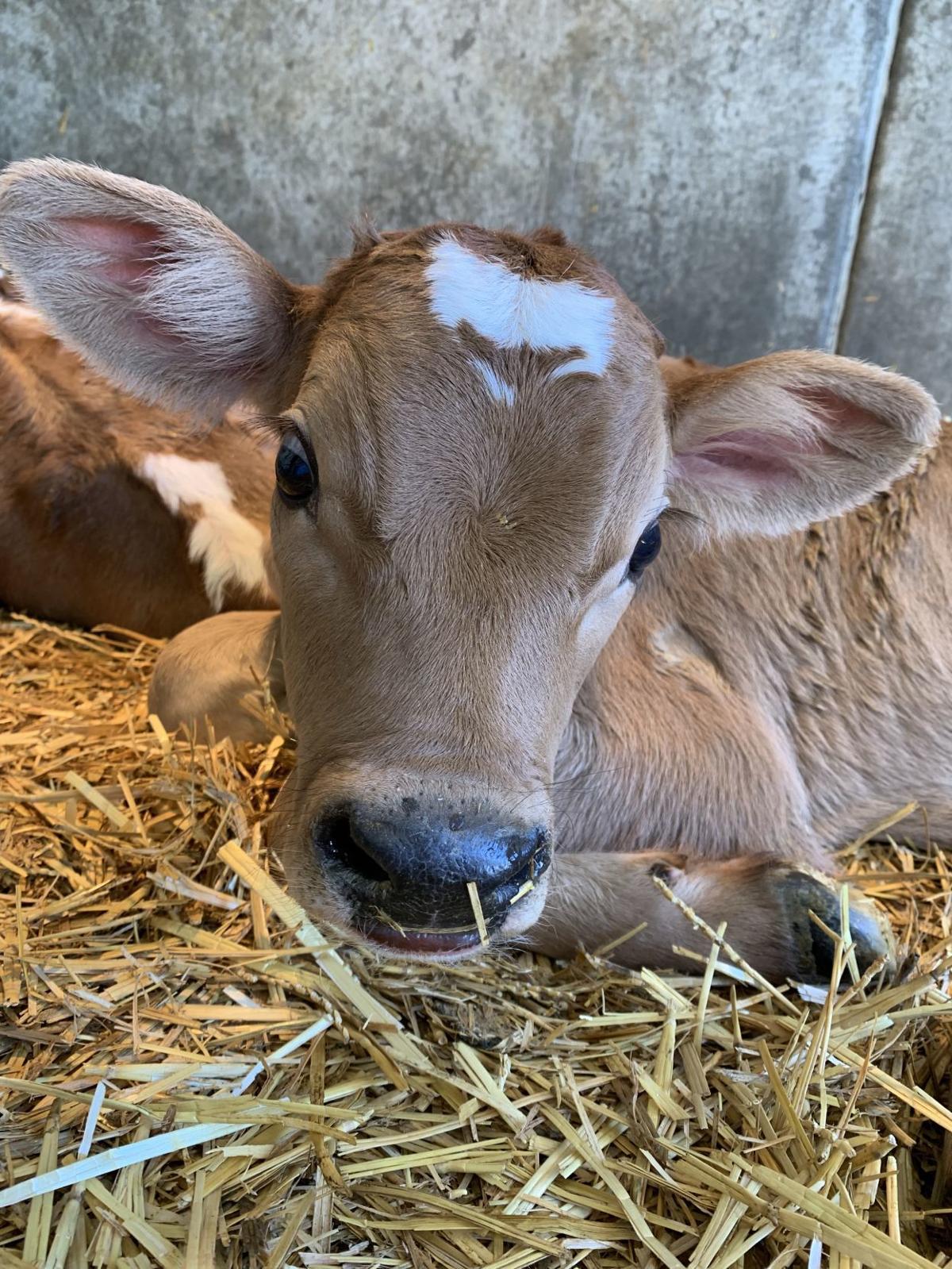 A calf at the Moo Riah Dairy. 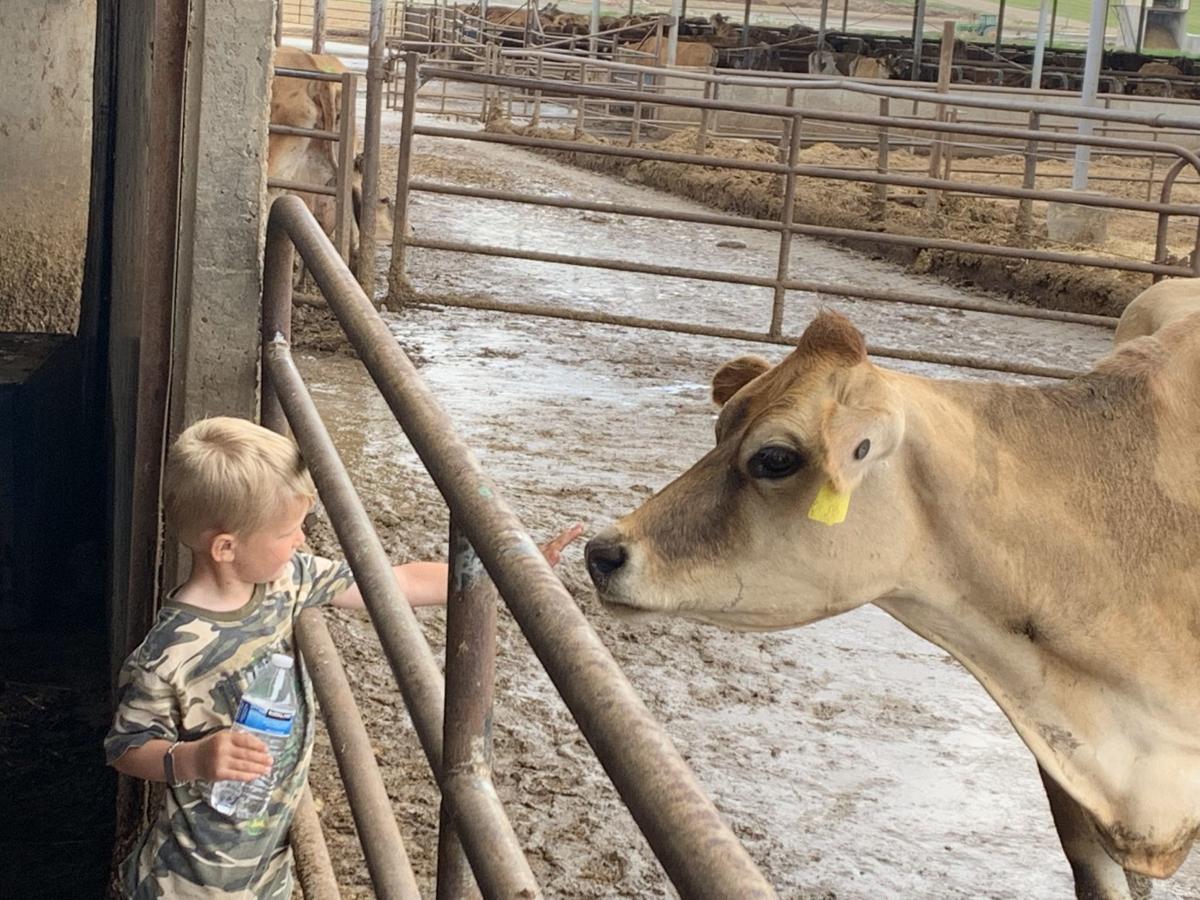 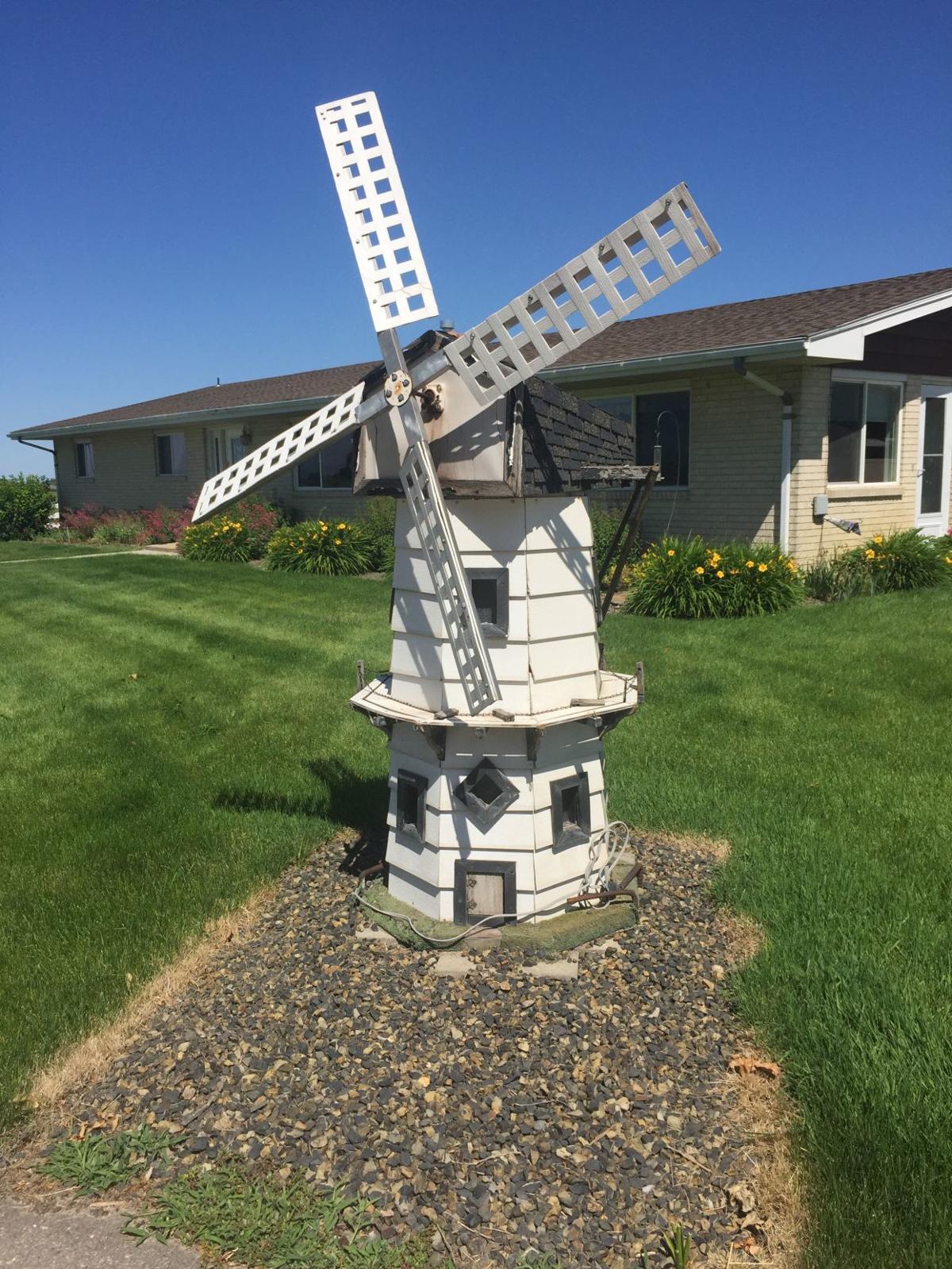 A windmill is a sign of the Dutch heritage at the Van Beek’s. 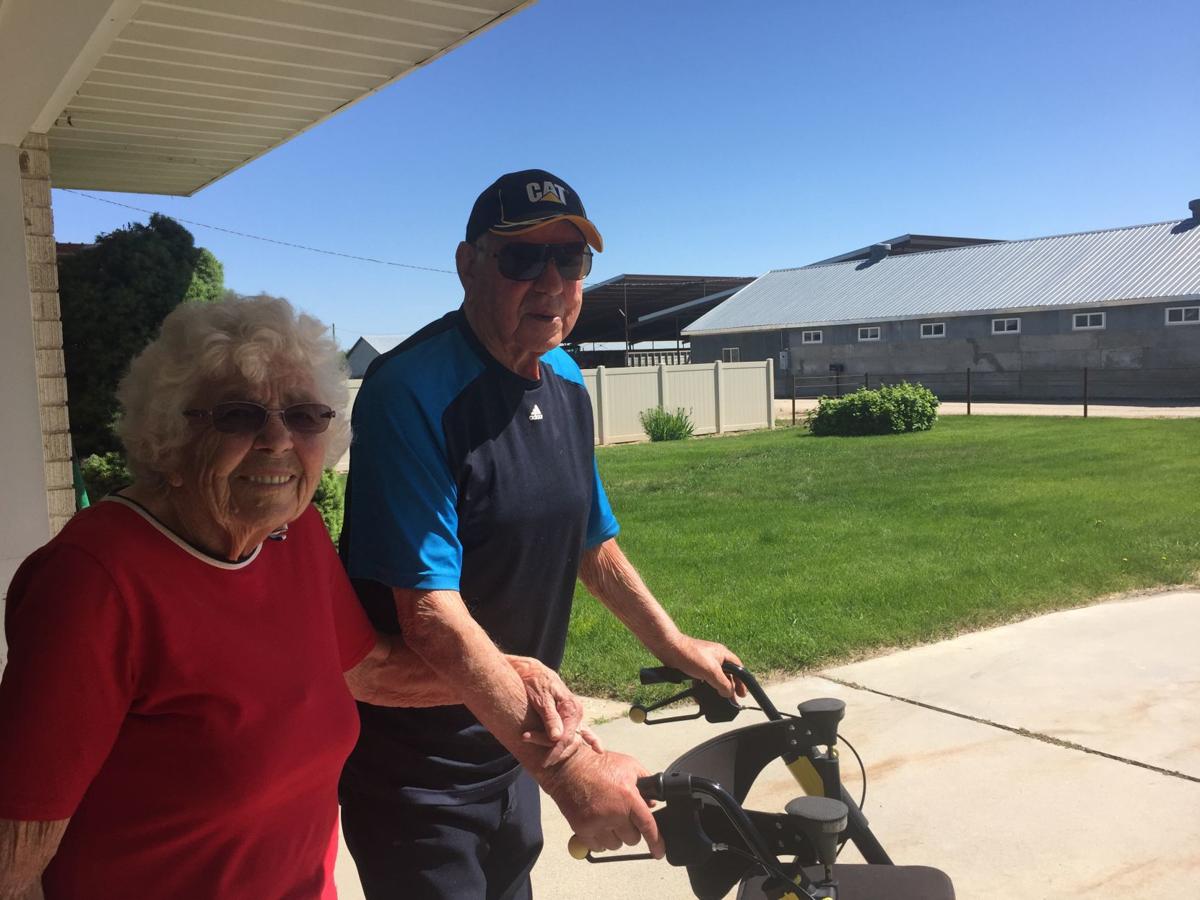 Dora and Evert Van Beek came to America and began their own dairy because they “knew cows.” 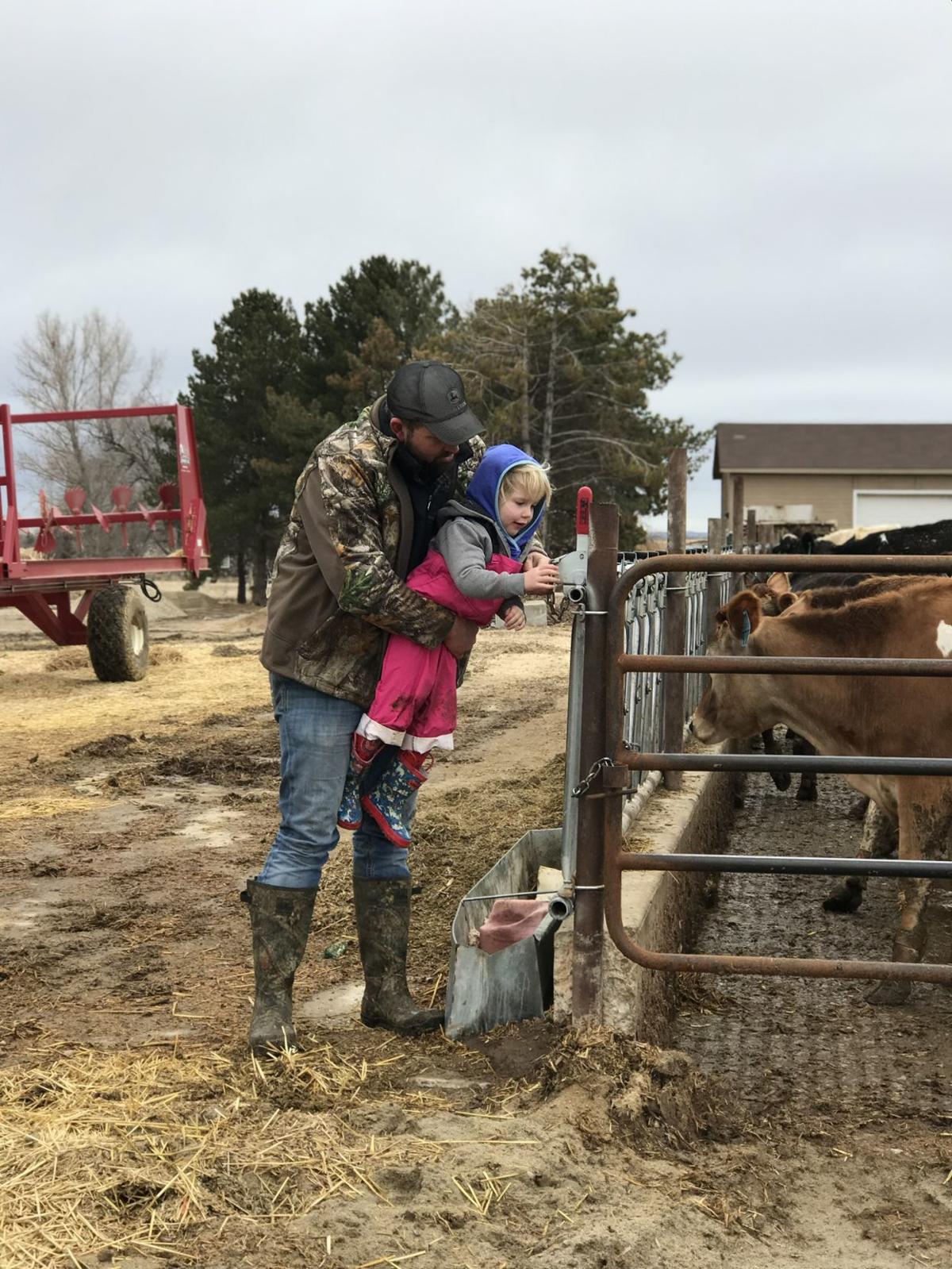 Rudi DeWinkle gets a helping hand from daughter Annalies, age 4. 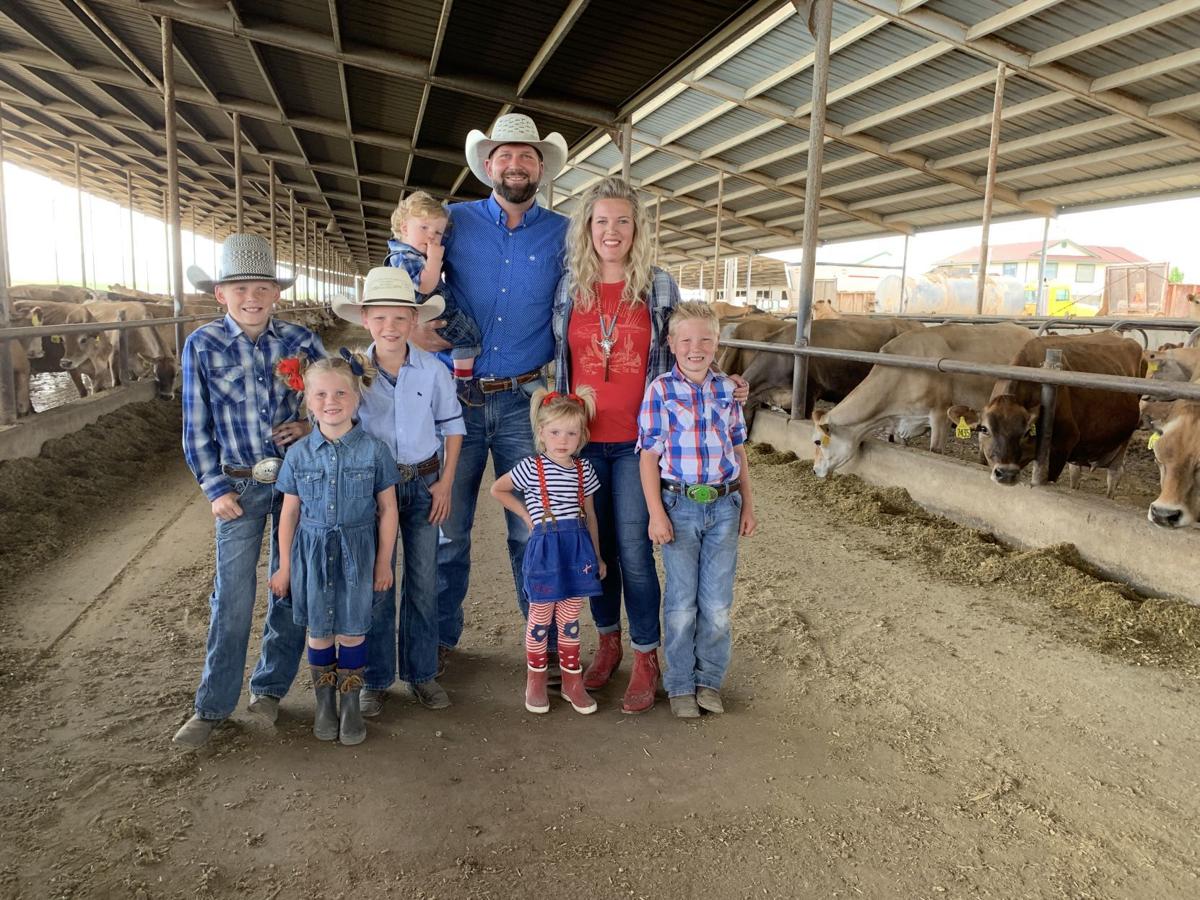 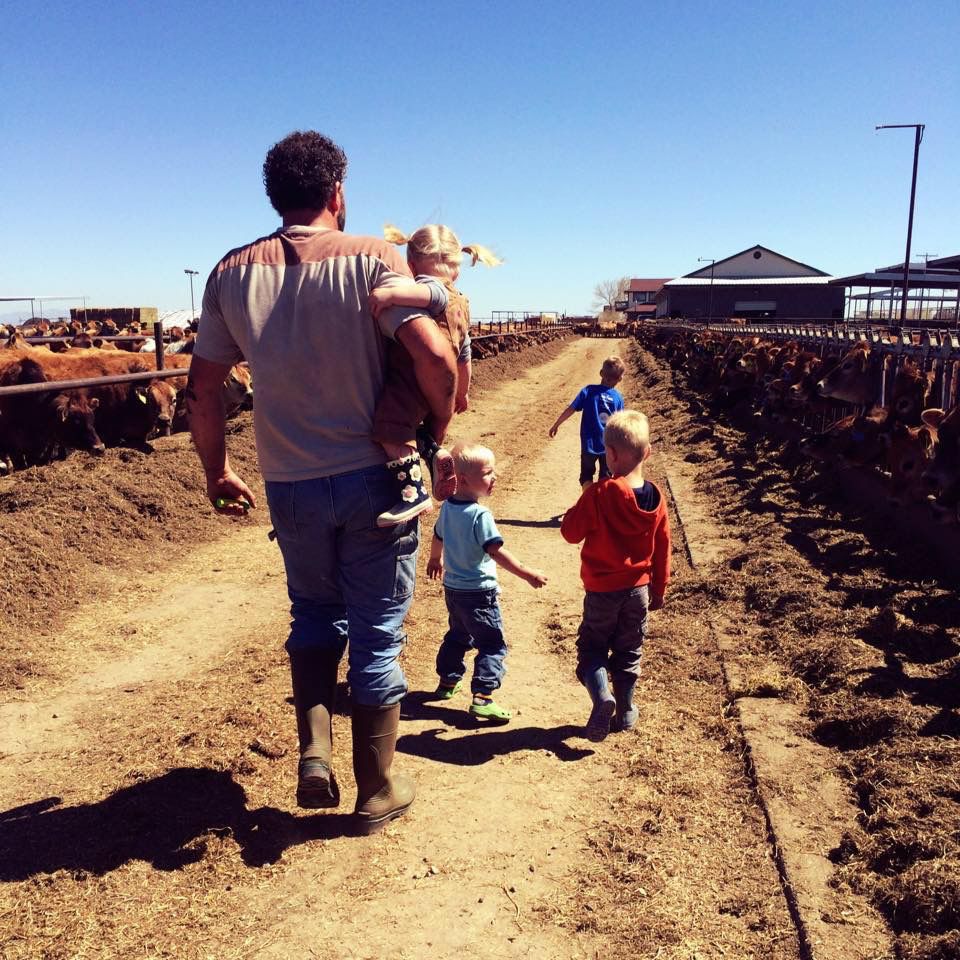 Working on a dairy farm is often a family affair.

Hans Bruijn showing one of his dairy cows, years ago.

Dora Van Beek points out a cross stitch that is all about their Dutch heritage.

Rudi and Anne DeWinkle and their kids.

A calf at the Moo Riah Dairy.

A windmill is a sign of the Dutch heritage at the Van Beek’s.

Dora and Evert Van Beek came to America and began their own dairy because they “knew cows.”

Rudi DeWinkle gets a helping hand from daughter Annalies, age 4.

Working on a dairy farm is often a family affair.

NAMPA ─ A windmill spins in the front yard of Evert and Dora Jansen Van Beek. They sit to the side of their house and reminisce about the past, in view of the empty dairy barn that pays homage to the thriving dairy operation they once had.

The Van Beeks are one of many Dutch immigrant families that flocked to the Treasure Valley during the last century. They can attest to the hard work a dairy requires, the rewards and challenges that immigrants face in the industry and the importance of remembering and celebrating their Dutch heritage.

Dora came to America as a baby with her family in 1929. They joined some relatives in California, and because they “knew cows” eventually had their own dairy.

Evert’s family had their own dairy in Holland, but during the Depression were forced to sell it. When he was 10, Evert said, he decided, “When I get big, I want to go to Canada or somewhere and have something of my own.”

After World War II, an American couple who had lost their son in a bombing in Holland sponsored Evert and his brother, making it possible for them to have a fresh start in the United States.

They first came to Utah, where their sponsors were from, and worked for a few years before heading further west to California.

“We met a guy on the boat coming over who said, ‘Come to California,’” Evert remembered.

Dora and Evert were married. After they had saved a little money, they decided to make the move to Idaho.

“We came to Idaho because it was still wide open country,” said Evert, now 95. “It’s a good place to raise a family.”

To Dora’s mother, Idaho represented the ends of the earth.

“They thought it was terrible that we went to Idaho,” she said with a laugh. “Funny thing was that they came later.”

Evert said he came with $70 and began working for a dairy. Eventually, they had their own 250-cow dairy, located north of the interstate on Ustick Road. There they raised two sons and seven daughters, most of whom still live in the area.

Despite the early mornings and never-ending chores, Evert said he believes the hard work resulted in a quality product.

“Milk is a beautiful product if it’s handled right,” he said.

Eventually the expenses of running their dairy grew, and the Van Beeks knew they had to either expand, or close up shop. They didn’t want to get bigger, and neither did their son, who ran his own dairy for a number of years.

“My husband always said, you should have the amount of cows you can take care of all year, according to your winter standard,” Dora said.

After 71 years in the United States, Evert has seen many changes in the dairy industry and is thankful to have had the opportunity to run his own dairy.

“We are blessed in many ways,” he said. “With hard work, you can have something here. It’s been good.”

The Van Beeks are the last of their generation of immigrants in the area, said Hans Bruijn, also a Dutch immigrant and former dairyman.

Bruijn, who now works for the Western Idaho Fair and is president of the Dairy Board, was born on a 300-year-old dairy farm in Holland on land reclaimed from the ocean.

“I can probably go 10 generations back and they were dairy farmers in Holland,” he said.

Bruijn came to the United States in the 1977 as a 20 year old. The plan was to come for a year, work for relatives in Idaho and West Virginia, then head home to Holland.

“I really liked it,” Bruijn said, “and I was thinking, ‘What am I going to do when I go back to Holland? Am I going to take over my dad’s dairy farm?’”

Ultimately he decided to stay. Bruijn received calves as part of his wages, so he hauled his small collection of heifers and cows across the country to Idaho and established a small dairy. Like the Van Beeks, his dairy grew to the point that he had to decide to expand or to get out of the business. He opted out.

“I enjoyed being a dairy farmer, but I don’t regret ever getting out of it. The stress is a lot less. Costs have gone up tremendously.”

He still has a few cows, for sentimental reasons. He raised Ayrshire cows, a red and white breed from Scotland.

From his experience, approximately half of the dairies in the area have a Dutch heritage. He attributes their success to Dutch efficiency that stems from a lack of abundant land in Holland that led to the need to be organized and efficient with what they had.

Bruijn said the first wave of immigrants came in the early 1900s. His own grandfather’s cousins settled in Nissa. “Don’t ask me why,” he said with a laugh.

The next wave came after World War II, his parents’ generation.

“There are quite a few more of that same generation that I knew very well here,” he said. “They either came because their farms were destroyed in the war, or they had siblings that took over the family dairy and it was time to leave.”

Then in the 1980s there was another wave of second-generation Dutch coming out of California, Bruijn said. Many of them left because of urban sprawl and came with more money than previous immigrants, enabling them to build bigger dairies.

One of those third-wave dairy families is the DeWinkle family of Moo Riah Dairy in Melba. One of the DeWinkle sons, Peter, said his grandfather left the Netherlands in 1948 for California, where Peter’s dad was born a year later.

“My dad was working for my grandfather on the dairy when he was in high school,” Peter said. “He had to milk cows day and night. He didn’t love it. When he graduated his father asked, what do you want to do? Do you want to take over dairy?”

Peter’s dad said no. He married another Dutch immigrant, and the two ran a successful farming business before leaving California for Idaho.

While Peter’s dad didn’t initially want a dairy, a series of events that they credit to God led them to forming Moo Riah Dairy.

Peter and his siblings grew up working at the family dairy, where they raised Jerseys, and they continue to have a hand in running the dairy. Milk from their dairy goes to Glanbia and is made into cheese.

Miriam said that although the dairy is a 2,000-cow dairy, “it’s all family-owned and run. It’s really wonderful because now all the kids and grandparents work together.”

Peter and Miriam, who are now preparing to move to Suriname and work with Mission Aviation Fellowship there, said they loved their time on the dairy.

“I took care of the cows, and we really loved it. Our kids would feed the calves. It was a fun life,” she said. “A lot of heart goes into it. We dedicated our life to it. All the time we were thinking, ‘How could we do it better? How could we take care of the cows better?’ It was a beautiful life in that you all work together. We wanted it to be a blessing to Idaho and be able to bless others with what we did.”

Miriam said with them both coming from immigrant backgrounds, they feel like they’re neither fully Dutch nor American, and it has made them sympathetic to other immigrants.

“It opened our eyes to people who are new in the U.S. and to welcoming them in,” she said.

Peter said there’s a ritual or “game” of Dutch bingo that Dutch people play when they go to a church or visit a new area. By the time the social time is over at church, they’ve made connections.

“It gives them a sense of community,” Miriam said. “People feel like they belong then. There’s a comfort in it, no matter where you are, you find others who are Dutch and you will fit in. They thrive no matter where, because of the Dutch community.”

Peter’s sister-in-law Anne, married to his brother Rudi, was born and raised in the Netherlands, in the Friesland area where the Holstein cow is from.

“When I immigrated, I was very surprised to find out how many of the dairymen in Idaho have a Dutch background,” she said.

Peter and Rudi’s sister, Siska, helps oversee the day-to-day operations of the dairy, and is proud of their Dutch heritage. “I love that when my kids are talking about their 4-H animals, they can tell their friends that my ‘Beppe’ grew up in Holland, the same place this sheep originated,” she said. “I have some things that I’ve always used the Dutch word for with my kids. Sometimes we don’t even know the right English word. Even our milkers use the Dutch words for some things.”

There are Dutch traditions the DeWinkles have continued with their own families, including reading the Bible after dinner every night, celebrating Sinterklaas at Christmas time and having an afternoon tea time to “catch up” with each other, which Siska said is very much a Dutch tradition.