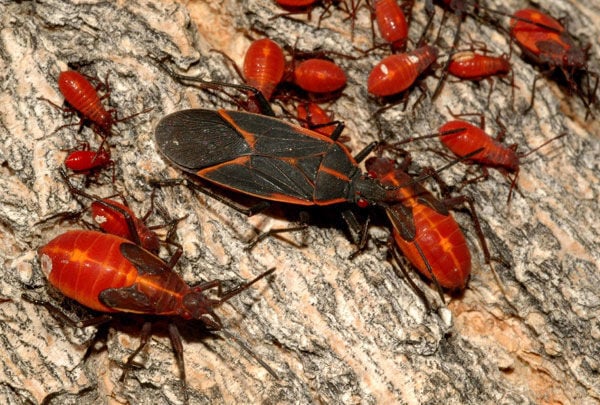 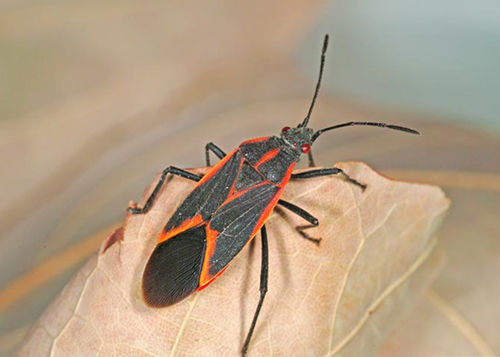 Alias: Box elder bug. As things begin to warm up in eastern Idaho you may begin to see bright read bugs crawling around south faces of your property. These are the nymph phase of the box elder bug, and will eventually grow into the black bugs with orange markings we are all familiar with. They prefer seed bearing (female) box elder trees but may occasionally move on to maples and stone fruits such as plums and cherries. They overwinter as adults and become active in March when the sun emerges. Adults are black with orange markings on the tips and outlines of the wings. Nymphs are predominantly orange with a little black.

Crimes: This bug is known for showing up in hoards, especially in the early spring and as summer comes to an end. They seek out warm locations and “sun” themselves in large congregations. Although they don’t really cause much economical damage, they creep and crawl enough to give anyone the heebeejeebees. They are famous for breaking and entering after the first frost in search of warmer temperatures. When stepped on they can leave a stain on your carpet.

Redeming qualities: Very rarely do they cause any damage. They are just annoying.

Sentence: Although there are pesticides in most stores that are labeled for box elder bugs, most of them have limited control are usually not recommended. A vacuum works well indoors. To keep them out, make sure you seal your windows and doors well. If they are common outside, remove any female boxelder trees. Keep in mind that they are mobile insects and they will move if they need to. Just because you cut down your box elder trees doesn’t mean your neighbors will. Sometimes tolerance is an appropriate answer.