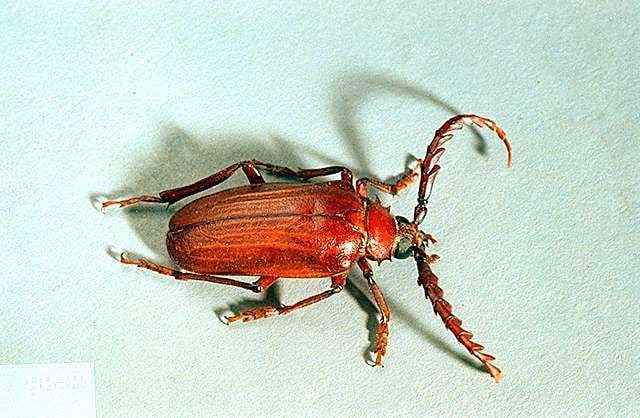 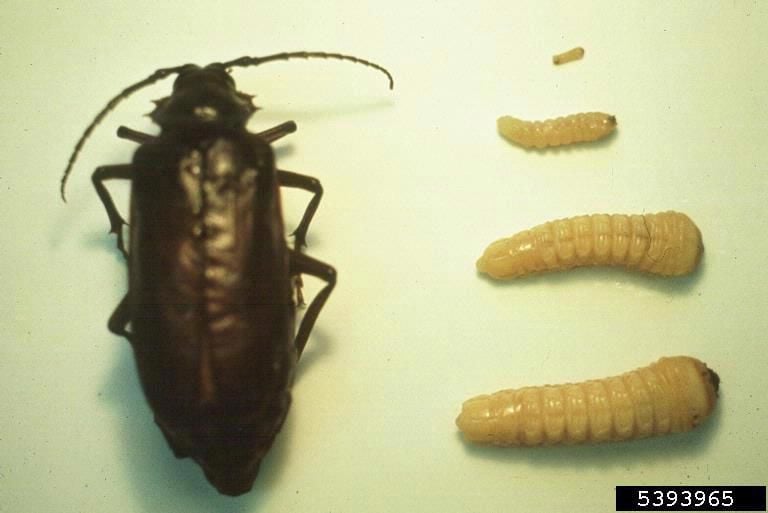 Alias: The California root borer (or the prionus beetle as it is often called) is tied for first place for the title of the largest beetle in Idaho. It spends the majority of its life underground feeding on roots of trees, shrubs and other hard-wooded plants. Adults resemble any other long horned beetle. They are approximately 1-3 inches in length with a brown to dark-black coloring. Their antennae grow long and are serrated like a saw. Adults are usually short-lived, living for less than a month for the sole purpose of finding a mate and laying eggs. Larvae are small, white grubs with a tiny, black head, which can live in the soil for three to five years.

Crimes: As the California root borer feeds on trees and shrubs it depletes them of their root system. They can also girdle the primary roots by feeding around the outside. This can cause significant issues in orchards and vineyards with large commercial productions. Most common symptoms resemble water stress, because the tree is unable to take up enough water from the lack of roots. Other symptoms can be yellowing (chlorosis) or wilting of the plant.

Sentence: Root borers have a lot of advantages. They are hard to see and detect because they spend all their time underground. They are also hard to notice because their symptoms look similar to other abiotic factors. There are not a lot of control measures labeled for controlling California root borers. The good news is that they hardly ever occur in numbers that are significant enough to warrant control options. If you suspect your trees or shrubs may have them, dig around the root system and look for the large white grubs. Exposure is the best way to rid your yard of this particular pest.