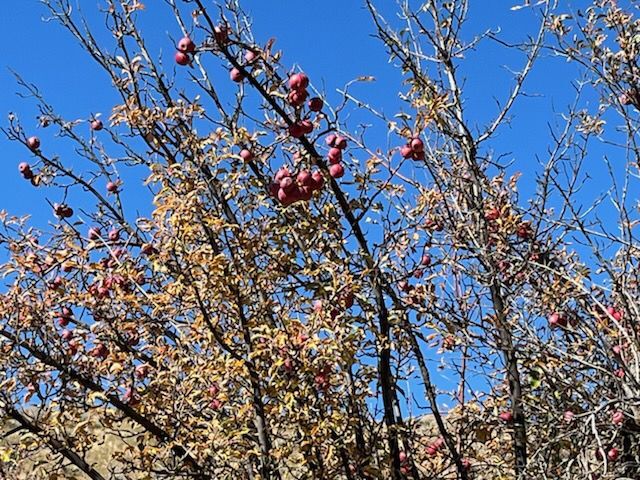 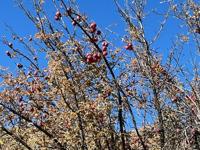 Heirloom apples grow on a tree in a remnant orchard in the Boise foothills. 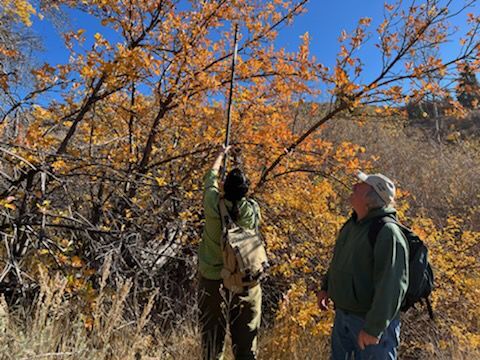 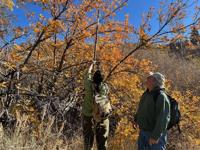 Volunteers with the Lost Apple Project’s Idaho chapter pick apples at a remnant orchard in the Boise foothills.

CALDWELL — George Raino and Richard Uhlmann have been hunting for a prize that could be hidden in plain sight.

As co-founders of the Lost Apple Project‘s Idaho chapter, Raino and Uhlmann investigate leads on heirloom apple varieties growing in remnant orchards and homesteads around the state. Looking at Canyon County fair records, they can see that one popular variety, the Walbridge apple, was commonly grown in the county, particularly in Caldwell, around 1910. They suspect that a Walbridge apple tree is still growing here — they just need a tip that leads them to a tree.

“I just can’t help but think that somebody has an old apple tree in their backyard that is a survivor from the orchards of Walbridge in 1910, and maybe somebody knows what that apple is,” Raino said.

Raino and Uhlmann founded the Idaho Chapter of the organization in 2018, but they had worked on heirloom apple fieldwork before that, Uhlmann said. Locating and identifying old apples is more than just a hobby. It may hold clues to promoting and preserving apple diversity in a warmer world.

FROM APPLE PARADISE TO NEAR-MONOCULTURE

Apples have long served as an important food source. Today’s apples are a hybrid between the Asian wild apple and the European crab apple, Uhlmann said. Grafted apple trees were first brought to North America on the Mayflower, Uhlmann said, though they were often grown from seed. Apple trees were quickly adopted by indigenous peoples, he wrote in a recent issue of Pomona, the member-written journal of North American Fruit Explorers. Both indigenous and Euro-American peoples acted as tree caretakers and helped spread the fruit across the continent, Uhlmann said.

Different apple varieties, also known as cultivars, have different food uses, Uhlmann said. Cider brewed from apples helped North America’s first European migrants survive travel in areas where it was difficult to access reliable drinking water, Uhlmann said. Tolman sweet apples could be cooked down to a shelf-stable molasses highly useful in baking, Raino said. Other apples made good vinegar, which had both food and medicinal purposes, Raino said. Even less-tasty apples could be used as animal feed, Raino said.

In the days before supermarkets, having a few varieties of apples in a neighborhood helped satisfy lots of culinary needs. In Idaho and other parts of the west, a requirement of founding a homestead was improving the land, and planting an orchard was one accepted method. Apples were planted from seed, or grafted trees, which are essentially clones of specific varieties, Uhlmann said.

The tree and characteristics of apples planted from an apple seed will be different from the apple that made the seed. But if a tree made particularly tasty apples, it could be cloned and propagated with grafting.

European settlers in Idaho planted large apple orchards to help feed miners, Uhlmann said. One such orchard, located in the Boise Foothills, is over 120 years old, he said.

In the late 19th and early 20th centuries, some notable Treasure Valley locals planted orchards for commercial purposes too. Orchard Street in Boise was named because of apple orchards, and Julia Davis Park in Boise used to be a 60-acre apple orchard that was later deeded to the city.

In 1900, 20,000-25,000 apple cultivars were being grown in North America, but by the turn of the 21st century, that had dwindled to just several thousand. Of those, only 200 or so are grown commercially, according to the Agricultural Marketing Resource Center.

THE PROMISE OF LOST APPLES

When it comes to crop health, genetic diversity is critical. One reason the Irish potato famine was so devastating was because most farmers at the time were primarily cultivating a single variety of potato that was susceptible to a fungus, Raino said. Growing different varieties of the same crop with a range of genetic characteristics helps ensure that at least one variety has the traits to survive pathogens, shifts in climate, and other challenges.

Raino and Uhlmann think the same is true for apples. Today, heirloom apple trees in remnant orchards may have sat untended for decades. Their survival may indicate genes that code for beneficial traits that make them resilient against pathogens, or a warming climate. A single heirloom apple tree could be a living repository of resilient traits, which could be studied and used to make commercial varieties more resilient.

But finding and identifying apples is an involved process that can take several years. Raino and Uhlmann are volunteers, as are the other 10 or so people associated with the project locally. They currently have a backlog of leads.

When they receive a lead from the public about a tree that could be a lost apple, they or other volunteers visit in June or July to confirm it’s an apple tree. They have to return in September or October to collect samples of the tree’s fruit and leaf tissue for genetic sequencing, which is done by the Washington State Department of Horticulture.

“It’s kind of frustrating because we have this narrow window of when we can actually look at what the tree is capable of,” Raino said. “It’s kind of frantic.”

Apples often look different from year to year, so sometimes a tree needs to be visited over a couple of years to collect apples.

There are five people who are apple identification experts in the entire country, Raino said.

“Those people are treasures,” Raino said. “It just staggers me. Your apprenticeship is 10 to 20 years of sitting in a booth at a county fair identifying apples people bring in,” he said.

For now, it’s a painstaking process, though there are some computer algorithms in development that could speed up identification.

When they do find a rare tree, they are careful not to share its exact location to protect it from plant poachers, Uhlmann said.

Aside from following leads, Raino and Uhlmann also systematically seek out lost apples. Requesting records from the Canyon County Fair for 1909 and other years helped them confirm that Walbridge apples were grown locally, as they were entered into the fair’s apple contest one year.

The records included the grower’s name: H.W. Dorman had several large orchards in Caldwell that have since been developed into subdivisions, each containing numerous lots, Uhlmann said. They have not attempted to canvass the area yet due to the logistical challenge of gaining access to so many properties.

“Certainly, if homeowners in the Caldwell area have very old apple trees on their properties, we would encourage them to contact us,” Uhlmann said.

The Walbridge was one of the most popular apple trees in 19th century U.S., so Uhlmann imagines they tasted good. There are a handful of trees in the western U.S. being evaluated to see if they’re Walbridge trees, but none confirmed yet, Uhlmann said.

Raino and Uhlmann continue to follow leads and tips, locate apples, collect samples, and graft twigs from found apple trees onto trees in their home orchards, and trees for planting elsewhere. Multiplying heirloom apple trees through grafting helps ensure that the tree’s genetics live on, even if the first tree dies.

Anyone with leads on potential heirloom apple trees or who are interested in volunteering with the Lost Apple Project Idaho Chapter is encouraged to check out the main organization’s Facebook page, and reach out to Richard Uhlmann at uhlmannr@gmail.com.

Have a tip? Want to volunteer?