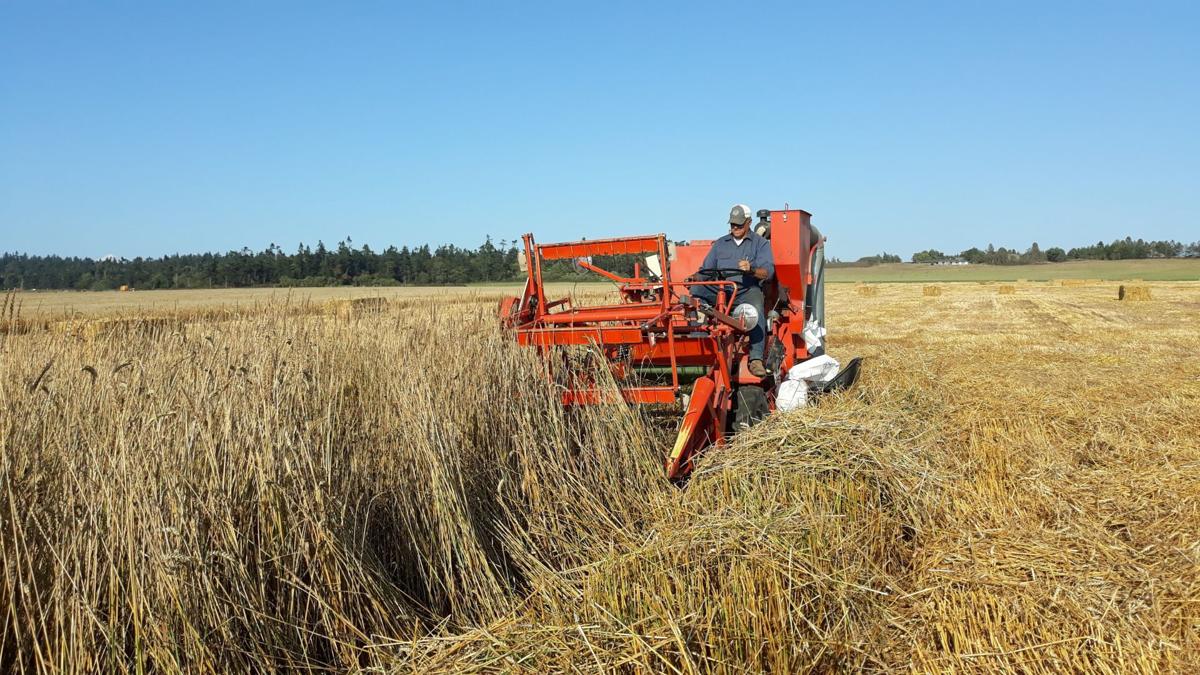 Officials with the Bread Lab, based in Burlington, Washington, cut a type of perennial wheat called Salish Blue. 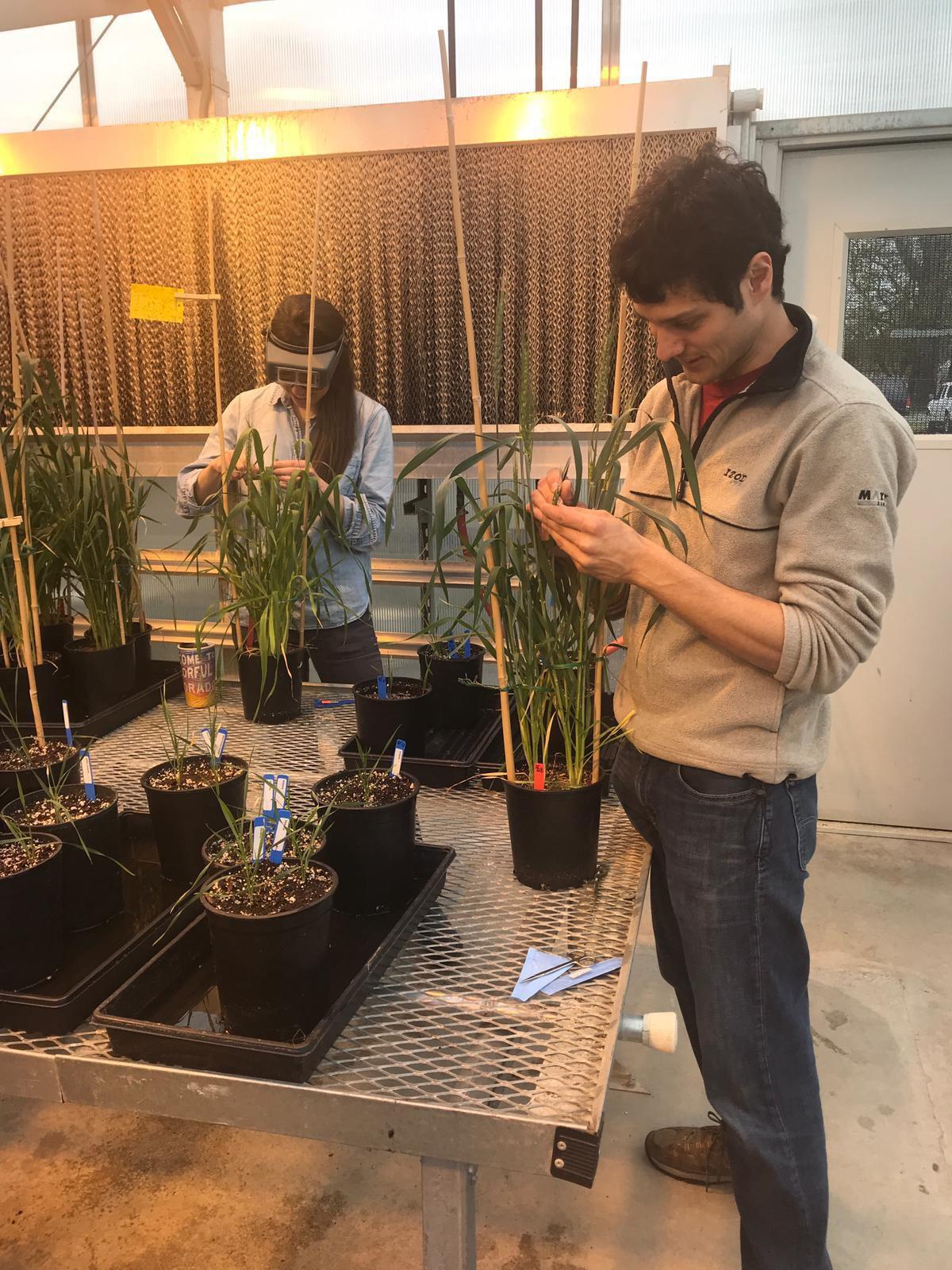 ABOVE: Robin Morgan, front, a Ph.D. student at the Washington State University Bread Lab, makes crosses to develop perennial wheat. BELOW: Officials with the Bread Lab, based in Burlington, Washington, cut a type of perennial wheat called Salish Blue.

Officials with the Bread Lab, based in Burlington, Washington, cut a type of perennial wheat called Salish Blue.

ABOVE: Robin Morgan, front, a Ph.D. student at the Washington State University Bread Lab, makes crosses to develop perennial wheat. BELOW: Officials with the Bread Lab, based in Burlington, Washington, cut a type of perennial wheat called Salish Blue.

Officials with the Washington State University Bread Lab believe a wheat variety they have in development with a large, blue-gray kernel will take grain production into a drastically new realm.

Growers who plant Salish Blue won’t have to till their fields, spread seed and apply herbicide to get their wheat crops to emerge each season. Rather, Salish Blue is a perennial wheat variety, meaning it will grow back on its own for several seasons, once established.

Though Salish Blue promises to save farmers time and money on seeding costs, Bread Lab officials believe its highest purpose will be in helping producers boost their soil health.

Robin Morgan, who is one of three Ph.D. students working at the Bread Lab, based in Burlington, Washington, explained growers benefit from the variety’s robust, permanent root system. The highly developed and interconnected roots aid in water infiltration into the soil and prevent erosion. The roots also help wheat plants better scavenge for nutrients, and they support interactions with beneficial soil microorganisms.

Salish Blue stems range from 4 to 6 feet tall, thereby returning biomass to the soil. Raising the crop would also allow growers to dispense with years of tillage, which disturbs soil and depletes vital organic matter. The Bread Lab has been involved in breeding perennial wheat for the past 20 years and has several hundred perennial varieties in the pipeline to follow Salish Blue.

“I heard of perennial wheat two or three years ago. I was really impressed by the direction, which I thought was very new and very different from anything before from a breeding perspective,” said Morgan, who is originally from Italy and worked for an Iowa nonprofit called Seed Savers Exchange before joining the Bread Lab staff. “What I really appreciated ... is that it’s about developing some tools to overcome the negatives of the annual cropping system.”

Morgan emphasized that perennial wheat won’t be a “silver bullet,” replacing annual wheat. Rather, he said it will be another tool to fill a niche for farmers seeking to reduce tillage, replenish organic matter and rebuild their soils.

Morgan said Salish Blue, which has end-use qualities similar to soft white wheat, has been raised in trials on the Olympic Penninsula and in Central Montana. It yields about 70 percent of a typical annual variety and is still about two years away from being released, Morgan said.

Morgan said some malting companies like the flavor profile of Salish Blue and are interested in using it as an adjunct ingredient for beer production.

“What we are breeding for is increasing yield, disease resistance and end-use traits so perennial wheat can become an economically viable crop for farmers,” Morgan said. “What we are doing as breeders is developing a large-seeded, high-yielding perennial that will eventually yield like a regular (wheat) crop.”

The Land Institute, a nonprofit based in Salina, Kansas, devoted to developing cropping systems that mimic natural systems, has collaborated with WSU, Oklahoma State University and Michigan State University on furthering perennial wheat.

According to the Land Institute, perennial crops stand to help mitigate for climate change while ensuring food and water security over the long term.

The Land Institute emphasizes that soil disturbance from annual cropping systems “has caused significant amounts of soil carbon loss — which ends up in the atmosphere as carbon dioxide — soil erosion, nutrient leakage and changes in soil organisms.”

University of Idaho Extension wheat breeder Jianli Chen hasn’t had time to invest in breeding perennial wheat, but she’s intrigued by the concept.

“Perennial wheat has potential,” Chen said. “We don’t have anything started, but that is something we could do in the future.”

“I can see where it fits our present-day systems as being really valuable for soil health — for improving soil structure and keeping roots on the ground at all times,” Wilson said.

She sees potential for perennial grains to be used in cover crop seed mixtures, which are planted for their soil health benefits rather than to be commercially harvested.

In Southern Idaho, Wilson believes perennial wheat could fill a similar niche as alfalfa, which remains in the field for three to five years before it’s removed in favor of another crop in the rotation.

Wilson believes perennial grain may eventually be sold as a niche product, directly customers willing to pay a premium for sustainable food, or food with unique attributes. She warns winter kill could pose a problem in some of Idaho’s high-elevation growing areas.