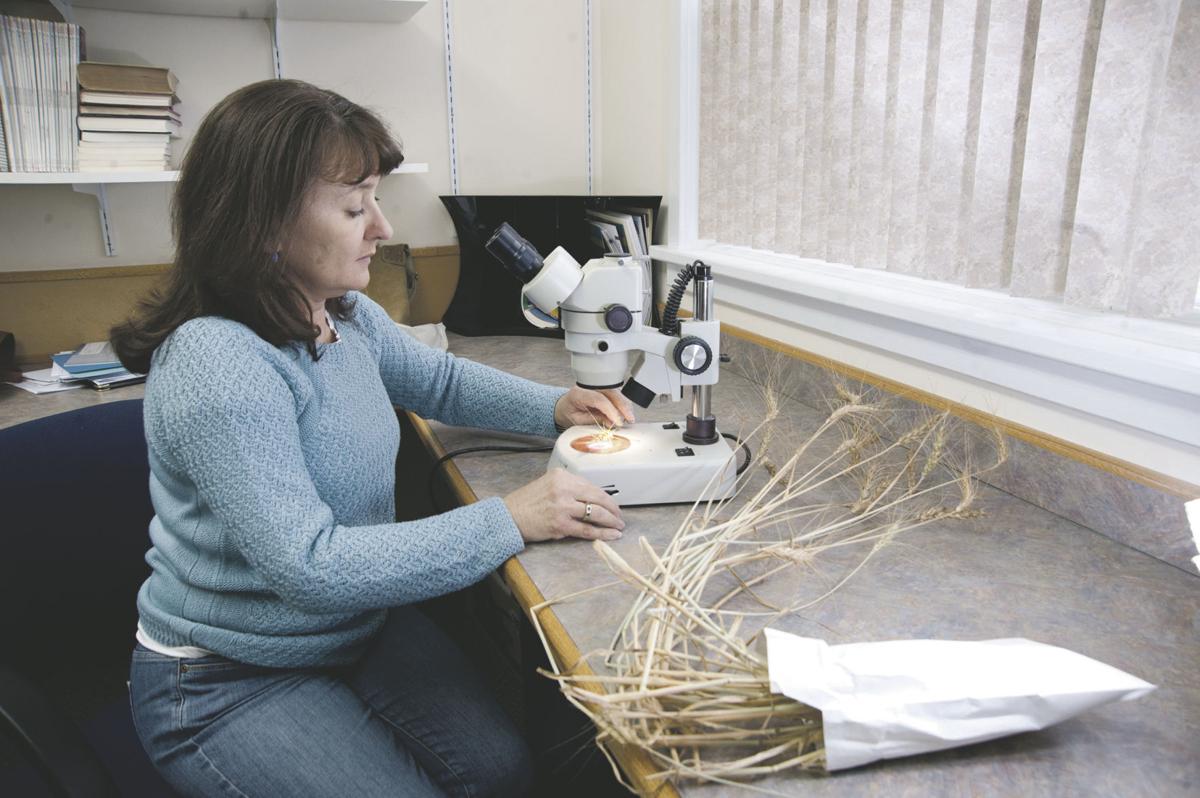 University of Idaho professor Juliet Marshall studies wheat through a microscope at the UI’s College of Agricultural and Life Science Aberdeen Research and Extension Center. 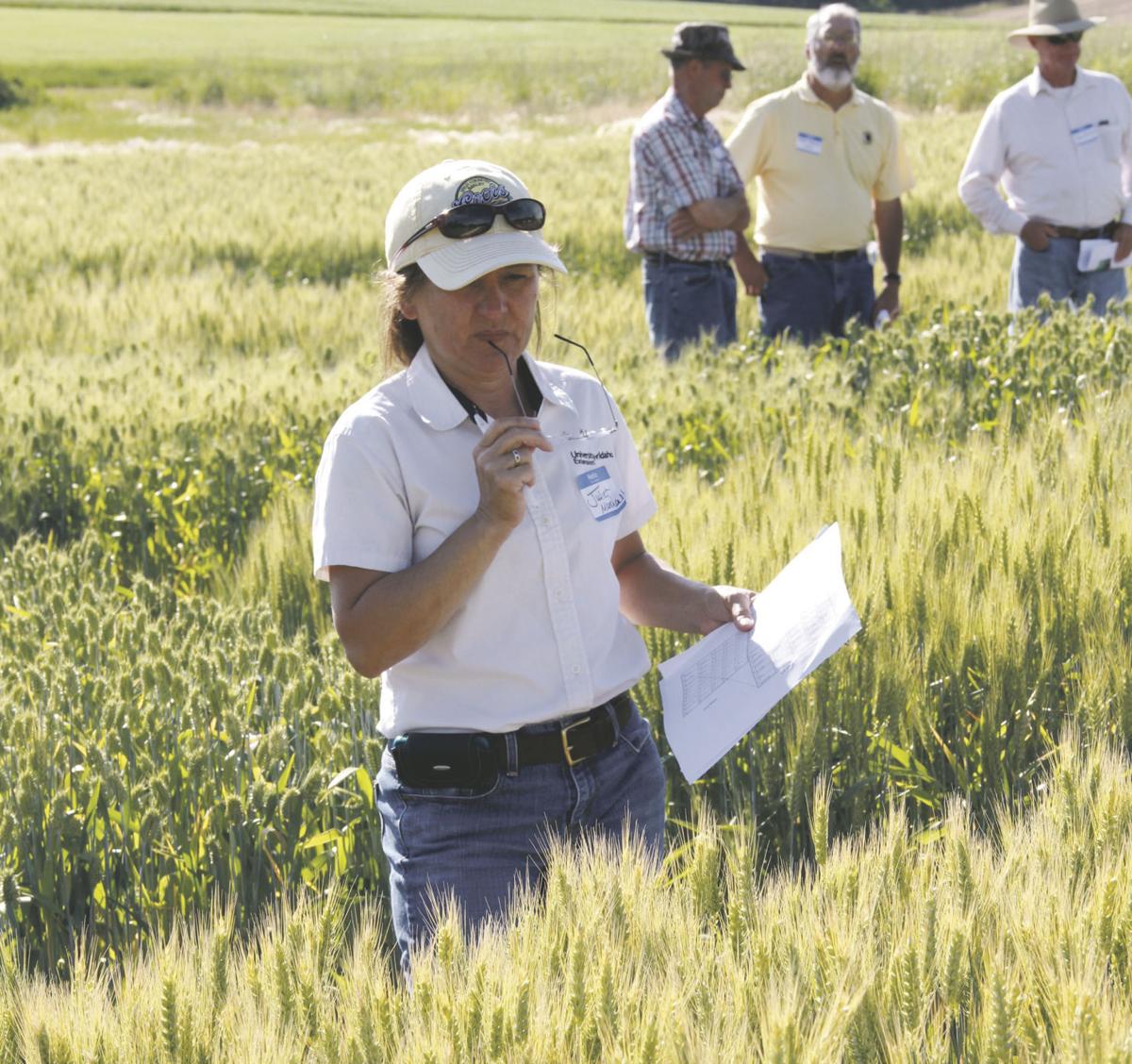 Juliet Marshall, of the University of Idaho’s College of Agricultural and Life Sciences inspects a field at the UI’s Parker Farm west of Moscow.

University of Idaho professor Juliet Marshall studies wheat through a microscope at the UI’s College of Agricultural and Life Science Aberdeen Research and Extension Center.

Juliet Marshall, of the University of Idaho’s College of Agricultural and Life Sciences inspects a field at the UI’s Parker Farm west of Moscow.

University of Idaho Extension cereals pathologist Juliet Marshall was initially pessimistic about East Idaho’s grain crops, as many fields were set back by early season frost and an extremely wet spring.

Throughout the bulk of the growing season, however, Marshall said conditions have been ideal for grain to fill out, and disease pressure has been much lower than she’d anticipated.

As wheat harvest wraps up in the Treasure Valley and Eastern Idaho growers prepare to start cutting wheat and barley, Marshall is expecting slightly above average quality and yields. Grain prices, which continue to languish below what it costs most Idaho growers to raise their crops, remain a concern.

“It’s not a bin buster, but the quality is decent, with good test weight,” Marshall said.

In Magic Valley, growers are well into their winter grain harvest and preparing to start cutting spring grain. Marshall said the region’s winter barley looks particularly good and the winter wheat crop appears to be a little above average.

In western Idaho, Mountain Home farmer Jeff Harper estimates his yields have ranged from 120 bushels to 140 bushels per acre. As of Monday, Harper was about two weeks into his harvest and was pleased not to have received any calls about any light wheat test weights. While last year’s grain crop was great, Harper said this year’s crop should at least be good.

“Our part of the state it was pretty nice grain growing weather,” Harper said, adding the cool weather helped the plants produce more tillers, which support additional grain heads and improve yields. “Grain likes it cool all season. We had that.”

Harper said his grain has been slow to dry, and he was still waiting for his last field to dry enough to harvest on Monday. A recent spell of days with 100-degree high temperatures has helped grain dry and mature, he said.

“The grain was really slow to get going. It might have tillered out really well,” Hoff said.

Hoff has had no issues with disease. He’s uncertain how the crop will yield, but he estimated current wheat prices are about $1.25 below his cost of production. Despite the poor grain prices, Hoff shifted some acres away from potatoes in favor of spring wheat this season.

He explained potato prices dropped and processors cut contracted acres in response to the COVID-19 pandemic. Though Hoff raises potatoes for the open market, without a contract, he thought it would be prudent to cut his spud acres, as well. Hoff said potato harvest has started in Western Idaho, and his potato crop appears to have an “average set and high quality.”

Marshall said disease pressure has been fairly low on cereal crops this season. Early in the season, she said wet weather appeared to be conducive for a bad outbreak of a fungal disease called stripe rust. However, she’s seen no stripe rust in barley and just a little stripe rust in wheat.

“The majority of the diseases were not foliar this year. They were soil borne,” Marshall said. “Diseases we saw were associated with poor crop rotation, or lack of an ability to have a good crop rotation.”

Marshall has seen take-all, which can reduce yields by about 5%, in patches of fields throughout Eastern Idaho.

Cereal cyst nematode has also caused problems in fields from Blackfoot through Ashton, especially in Jefferson, Madison and Fremont counties, where soils are sandy. She said cereal cyst nematode yield losses of up to 25% have been consistent with previous years.

At the season’s start, she said farmers experienced some winter kill in their winter wheat and many had to reseed spring wheat in the dead patches. Furthermore, she said May temperatures that dipped down to 16 degrees affected some upper-elevation winter grain, and frost blanked out some spring barley heads in the Ashton area.

Overall, however, she said East Idaho’s conditions have been excellent for grain to fill in.

“Because of the good conditions for grain fill, we’ll have an average to above average crop, depending on field location,” Marshall said.