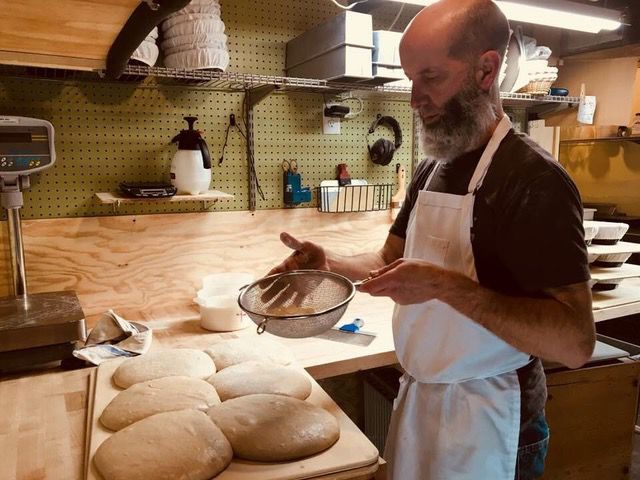 Matt Sanger, of Round River Bakery in Pocatello, bakes his trademark round loaves of bread. 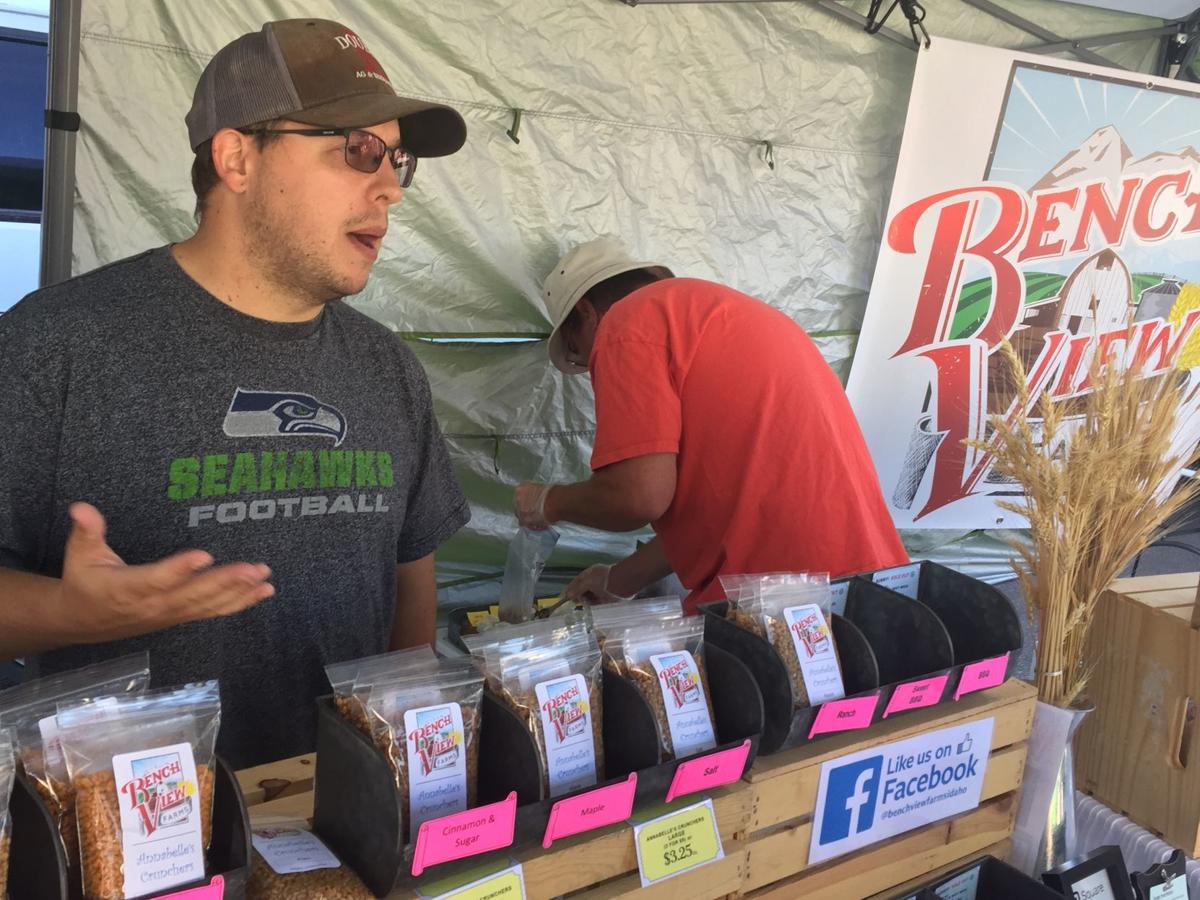 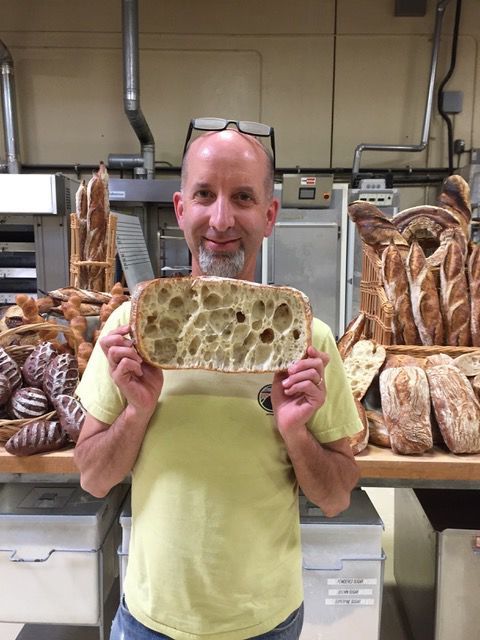 Matt Sanger, of Round River Bakery in Pocatello, bakes his trademark round loaves of bread.

Editor’s note: This is the first installment of a three-part series on local grain economies. Part II, detailing the rise of small mills in the Northwest, will run in the Oct. 11 edition of Farm & Ranch. Part III, describing the Washington State University Bread Lab’s efforts to promote local grain as a flavorful and healthy alternative, will run on Oct. 18. All installments will be posted online at postregister.com/farmandranch/ and on the Farm & Ranch Facebook page.

Mark Ralphs knew the 240-acre farm his family inherited in Southeast Idaho’s Rockland Valley was too small to be viable if it remained a cog in the conventional supply chain.

Their cropland was split four years ago from a 3,000-acre farm that had been in the family for five generations. The bulk of the ground was bequeathed to other relatives.

It took Mark about a year to sell his father, Delford, on a bold plan to keep the combines running by capitalizing on their family’s rich, agrarian story.

Their Bench View Farms is part of the burgeoning “local grain economies” movement in agriculture — which entails pulling out of the conventional pipeline, whereby grain is sold cheaply as a commodity, shipped elsewhere for milling and distributed widely. Their business model recognizes the curiosity of a public that’s become disconnected from agriculture and desires greater transparency in food production.

“Either you sell the land or you’ve got to figure out a completely different way of doing things,” Mark said. “Conventional farming at $4 per bushel and 240 acres, it would cost you more to grow a crop per year than you’re going to get out of it.”

Nowadays, the Ralphs are more concerned with flavor and nutrition than pushing the envelope on yields. They sell products — including organic ancient grains, specialty flours and fried wheat-berry snacks called Annabelle’s Crunchers — directly to consumers, who place value in having a relationship with their food producers.

Customers can read about the origin of Bench View Farms online: The Walker brothers founded the valley’s first dry-land wheat farm in 1898, also introducing the area’s first steam-powered tractor a few years later. At Pocatello’s farmers market, visitors of their booth can sometimes meet Annabelle, the young girl who is the namesake of the family’s famous cruncher snacks.

On social media, the family posts photographs documenting farm activities, such as cattle branding, and their clientele shares baking experiences with products that can’t be found in a typical supermarket.

One post reads: “I make homemade bread with their organic einkorn flour and cracked einkorn berries. It makes a beautiful golden-colored loaf with delicious flavor!”

The family recently added black Nile barley to its selection of ancient grains and plans to soon start raising emmer and spelt.

While many who participate in the local grains movement pad their wallets by cutting out the middle man, regional mills are also re-emerging to serve local communities.

The Ralphs for example, consider their direct sales to be the “icing on the cake” but sell most of their volume as organic wheat to Central Milling in Logan, Utah, at a sizable premium over conventional bushels. The mill is a key supplier to the area’s artisan bakers.

“There is demand for (organic),” said Jeff Bowes, Mark’s brother-in-law. “We’ve even had places out of state looking for large quantities of organic.”

Matt Sanger’s desire to play a role in the local grain movement led him to quit his job as a professor with Idaho State University’s College of Education in 2016 and open a small bakery in the basement of his Pocatello home.

In the initial months after launching Round River Bakery, his greatest challenges were coping with long customer lines and selling out prematurely.

As an artisan baker, Sanger believes buying local flour provides him with fresh, high-quality ingredients and also supports farmers and millers in his own region. While industrial-scale bakeries prefer high-protein wheat that can withstand heavy mixing and trap more air for a lighter loaf, Sanger turns to Central Milling for flour that better fits his needs.

“Places like Central Milling are providing the kinds of flour that are designed to make the products I’m making. They are the alternative to industrial grain production,” Sanger said.

He said the mill’s flour blends are developed with artisan bakers’ long fermentation times in mind.

“With industrial bread, time is money,” Sanger said. “We do long fermentation. That’s part of what gives you nice flavor and also contributes to the texture.”

Sanger has entered into discussions with Bench View Farms about sourcing some of his organic wheat directly from them and milling it in-house.

There used to be small flour mills scattered throughout the country. By the 1980s, much of that infrastructure had disappeared, and a small number of very large mills remained, Sanger explained.

“(Small mills) are springing up all over the place, and bakers are milling in-house, and farmers are working with local millers to supply local bakers,” Sanger said.

Skylar Jett, manager of the Idaho State Department of Agriculture’s Idaho Preferred program, which promotes in-state products, has noticed a trend of both small mills surfacing in Idaho and growers raising niche grain varieties to supply them.

Grain with a ‘higher purpose’

The family saw a business opportunity when they learned that the Pocatello-based bread company Harper’s Homemade, founded in 2001, was sourcing its ingredients from the same local plants that were processing their commodities. So in 2016, Driscoll Brothers decided to buy Harper’s.

The bakery uses only ingredients originating from local food producers, including the Driscolls, and operates under a motto celebrating that commitment: “Life is made meaningful when centered around a higher purpose.”

“We want to be be able to connect the consumers with a farm-to-table story, especially in an area like Southern Idaho that has a lot of production agriculture,” said Jordan Driscoll, business manager with Harper’s. “A lot of people don’t realize that crops that are grown here are made into products you can consume here.”

Growing up, Driscoll would harvest grain and watch it leave the farm, having no idea where it would ultimately end up.

Harper’s uses wheat milled at Grain Craft in Blackfoot, potato flour from a Ririe mill, Rocky Mountain Honey from Idaho Falls and local beet sugar from Amalgamated Sugar Co. The bread is distributed throughout Idaho and parts of Utah.

In addition to providing an especially fresh product, Driscoll said the reduced shipping time allows Harper’s to bake its loaves with no additives or preservatives.

“The back of our ingredient label is very clean,” Driscoll said. “We’re not necessarily trying to build an organic item. We just wanted a good loaf of bread that doesn’t have artificial preservatives.”

The company participates in Grain School at University of Colorado, Colorado Springs. The grain school, scheduled for January, caters to artisans and aims to “reintroduce whole and heritage grains at home, in institutions and in the community.”

The company also bought a grain elevator in Klamath Falls, Oregon, enabling them to segregate organic grain and other specific grain varieties growers in that area are producing.

After two years in business, Sanger — the professor turned baker who started Round River — reports his demand remains strong and he’s poised to move his bakery out of his home and into a commercial setting.

Some customers appreciate that he bakes an organic product. Others support him out of a desire to keep their spending local. Many like that his production involves less transportation, minimizing his carbon footprint. Flavor, freshness and nutrition also can’t be discounted.

A common thread is that customers simply want to know the face behind their baked goods.

“It’s not just that it’s local. There’s a local person that you know,” Sanger said. “There’s a story to it.”