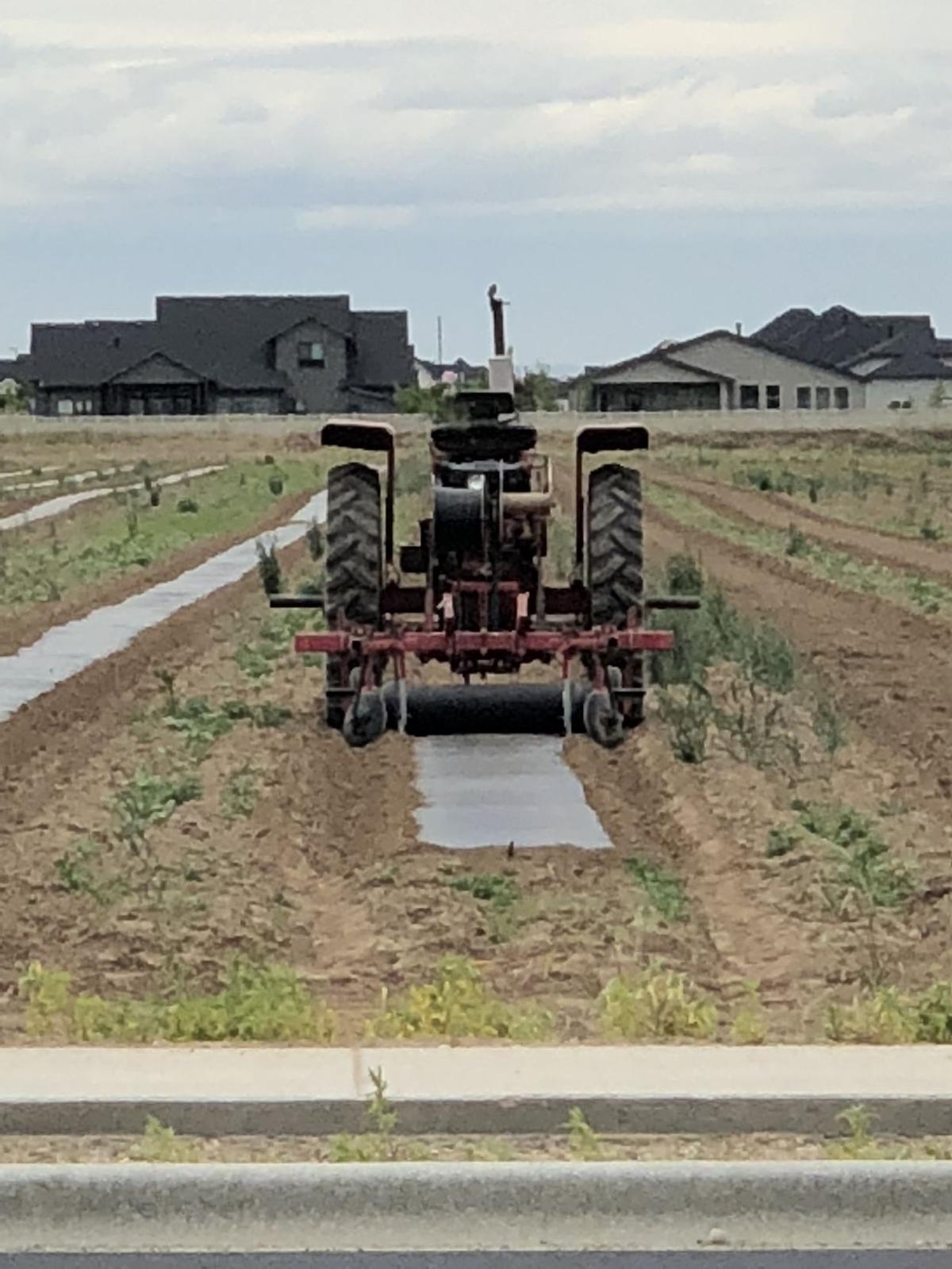 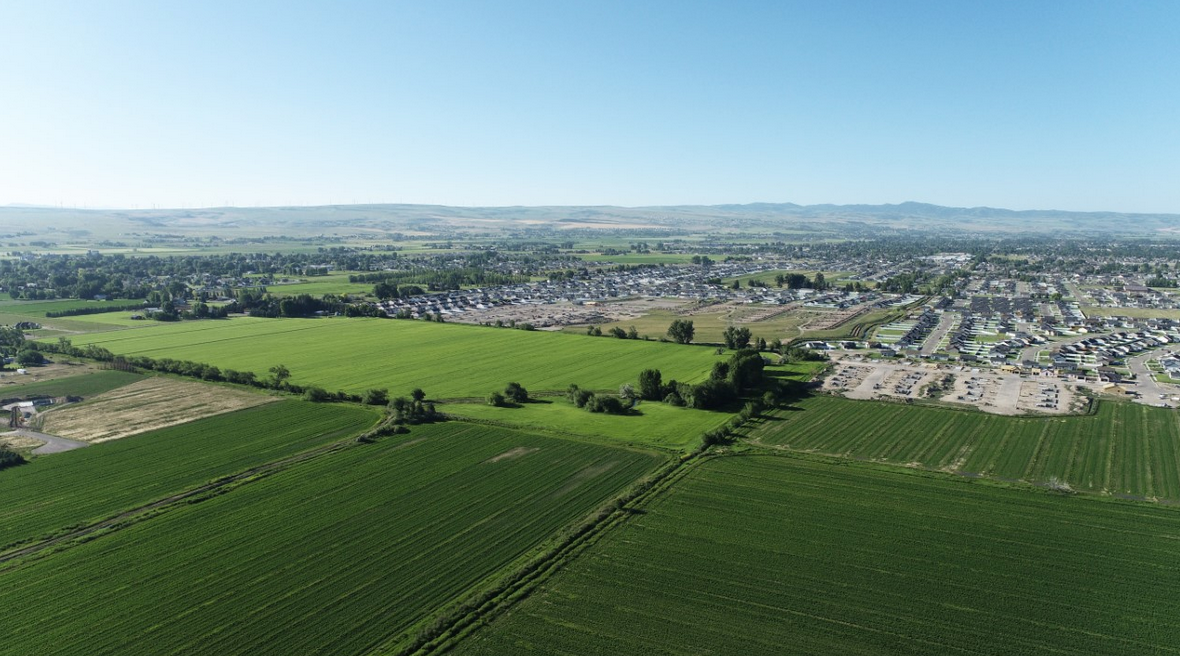 Most of the farm land that has been disappearing in Idaho due to development is located in the Treasure Valley.

Most of the farm land that has been disappearing in Idaho due to development is located in the Treasure Valley.

A new national report shows that 68,823 acres of Idaho farmland — an area larger than the city of Boise — was developed or compromised between 2001 and 2016.

Idaho was not the only state that lost a good chunk of agricultural land during that time.

The report, which includes state and county level data, shows that 11 million acres of agricultural land in the United States met a similar fate.

Not surprisingly, much of the farmland that disappeared in Idaho during that period was in the Treasure Valley of southwestern Idaho, which is one of the fastest-growing areas in the nation from a percentage standpoint.

Recently retired Meridian farmer Drew Eggers said the Treasure Valley, which includes Boise, Meridian and Nampa, the state’s three largest cities, is a great place to live and he’s not surprised at all that a lot of farmland in the area has been lost to development.

It’s disappointing, but not surprising, he said.

“I saw it coming 20 years ago,” said Eggers, who still rents out his farmland. “People want to move out into the areas of rural farmland in Ada and Canyon counties because it’s a great place to live.”

Many of those people live on land that was until very recently growing mint, beans, sugar beets, corn, wheat or many of the other crops grown in the region, which is one of the global leaders in seed production because of the favorable growing conditions and reliable supply of irrigation water.

Eggers, who lives on the outskirts of town, said that when he drives toward downtown Meridian now, “I don’t know where I’m at and have to look at the road signs. The landmarks, such as the old barns that I used to know, aren’t there anymore.”

“Farms Under Threat,” a multi-year effort by American Farmland Trust, shows that from 2001-2016, 11 million acres of ag land in the United States were paved over, fragmented or converted to uses that jeopardize agriculture.

The study, which used spatial mapping analysis, also shows that 4.4 million of those acres were nationally significant land, or the most productive land for crop production.

In Idaho, 17,800 acres of the ag land lost during that period were considered nationally significant land.

Besides the Treasure Valley area, the other hotspots in Idaho for ag land loss, according to the report, were centered around the urban areas of the state and were most pronounced near Idaho Falls, Twin Falls and Coeur d’Alene.

The pressure to develop farmland to accommodate Idaho’s rapidly growing population is being felt beyond just the Treasure Valley.

“Some of the best land in the United States is around the Twin Falls and Kimberly area and they are building on it. It’s sad to see,” said Sen. Jim Patrick, a Republican farmer from Twin Falls.

But the loss of farmland in Idaho is most pronounced in Ada and Canyon counties in the Treasure Valley.

About 8,000 of Idaho’s 24,000-plus farms are located in the greater Treasure Valley area, which is also by far the state’s most populous region. The result is constant pressure to develop.

Development pressure in Ada County, which includes Boise and Meridian, is extreme, said Ada County farmer Neil Durrant, whose family farms wheat, beans and seed and runs a warehouse that deals with about 250 farmers in the region.

“You look to the north of us and the farmland is almost non-existent there anymore,” he said. “They’re coming out closer to where we’re at near Kuna and any place you drive, you see the subdivisions coming in. There are for sale signs everywhere.”

Durrant said his family gets offered money from developers about once a week for the land they own.

The Durrants farm 1,500 acres and the majority of that land is rented. While the family has still been able to find land available to rent, the rapid development has resulted in them having to travel further from their base of operations — Big D Ranch in Meridian — to find it.

“A lot of the land we do rent now is owned by developers and we’re just farming it until they decide to put the homes in the ground,” Durrant said. “I still think there is a future for farming here for my generation. For my kids, I’m not sure.”

The AFT report differs from the USDA’s Census of Agriculture report, which is conducted every five years and uses different categories to describe ag land classes. The “Farms Under Threat” report is based on satellite-derived data in combination with other datasets.

Besides documenting the loss of farmland, the report also serves as a call to arms to preserve the nation’s remaining agricultural land, AFT President John Piotti said during a May 20 webinar unveiling the results of the report.

While the loss of agricultural land documented in the report is sobering, the good news is that “we can protect our ag land and the people who work on it,” he said. “But to do so, we must seize the moment. Today, we are issuing a call to action.”

“AFT is taking action but we can’t do it alone,” he said. “Together, we can make a huge difference. American Farmland Trust stands ready to work with any state to achieve those goals.”

The AFT report looked at how states have addressed the issue of disappearing ag land and assessed six policy tools commonly used to protect farmland.

They include the purchase of agricultural conservation easements that permanently protect working farm and ranch land; land-use planning policies that manage growth and stabilize the land base; property tax relief for ag land that improves farm and ranch profitability; ag district programs that encourage landowners to form areas to protect farmland; programs that connect land seekers with landowners who want their land to stay in agriculture; and state leasing programs that make state-owned land available to farmers and ranchers.

Twenty-nine states have funded voluntary ag conservation easement programs, which pay farmers a certain price per acre in exchange for an easement that preserves the land as farm ground.

In recent years, several groups in Idaho have discussed ideas to preserve farmland and the idea that has risen to the top of those discussions is a voluntary ag easement program.

Durrant said that type of program would probably be the most viable in Idaho because the support of private property rights runs so deep here.

Whatever the solution, it has to include a rock-solid support of private property rights, he said.

“You can’t tell somebody, we’re not going to let you develop your land because that is infringing on your rights as property owners,” Durrant said. “Who can blame a farmer who has worked hard his whole life, and now has his wealth in that farm ground, if he wants to sell his land?”

Patrick, the state senator, agrees with that viewpoint.

“I hate to see the loss of farmland but I also believe that a farmer should have the right to sell their land because it’s their retirement,” he said.

George Crookham, CEO of Crookham Seed Co., which is located in the Treasure Valley, believes adopting smart growth strategies such as developing cities from the inside out instead of allowing subdivisions to be plopped into the middle of ag land, is one way to slow the loss of farmland.

Without solid zoning rules that support smart growth, he said, farmland will continue to be lost in the valley and more farmers will have to resort to farming between the cracks.

“Some people say, one little subdivision over here or there, how does that hurt?” he said. “Well, it pushes us into the cracks and we can’t farm between the cracks. It also has a domino effect. If you sanction one rezone or redevelopment, how can you reject a similar request?”

“Zoning is really for the benefit of everybody,” Crookham added. Without it, “it’s just going to be a free-for-all. We’re going to grow but we should grow from the inside out.”

In the model’s best-case scenario, which has population density increasing as a result of so-called “smart growth” policies, the valley loses 110,000 acres of ag land by 2100.

The worst-case scenario, which has population density unchanged from what it is now, shows the valley losing 240,000 acres of ag land.

Crookham said the BSU report is downright scary for farmers and “it makes the ag industry question our future and whether we should start looking at alternative areas.”

He said the loss of farmland has to be addressed in one way or another if Treasure Valley residents want to continue to have agriculture as one of the area’s economic bases.

“Farmland is essential to agriculture,” Crookham said. “If the citizens of the Treasure Valley want to continue having agriculture as a part of our economic base, then we need to address the loss of farmland.”