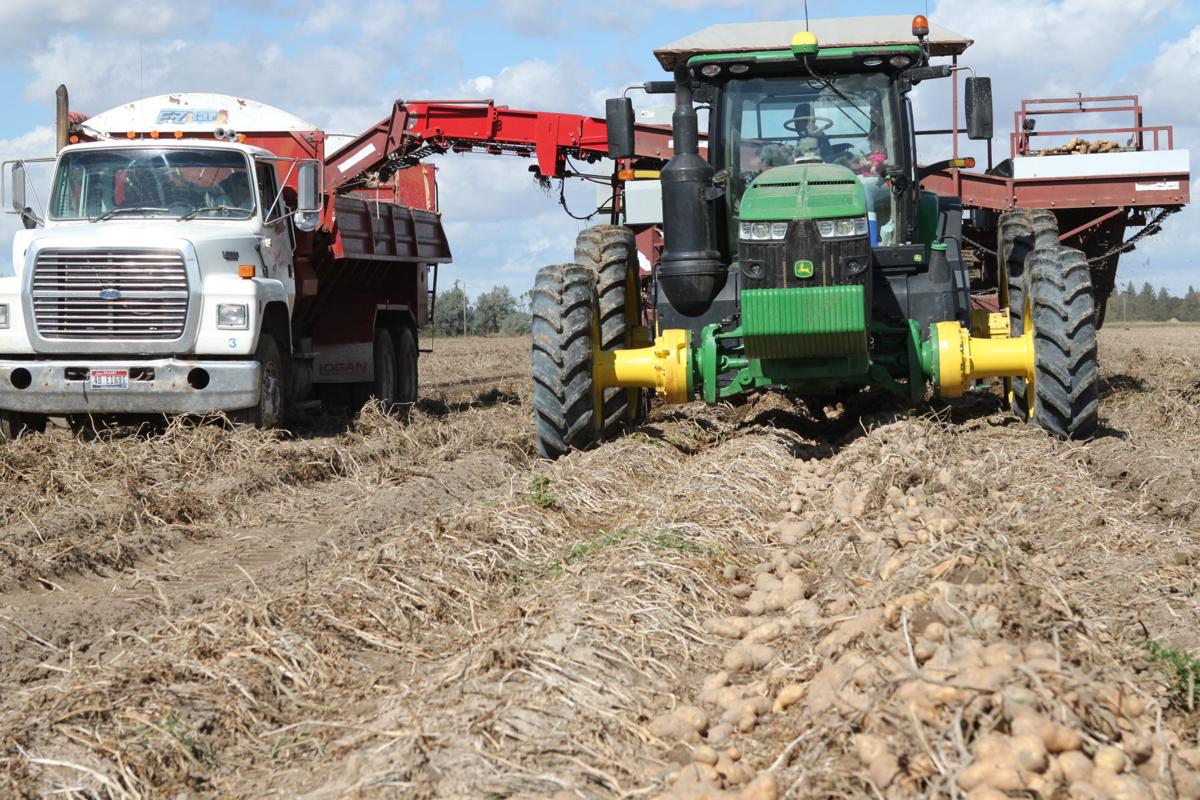 Potatoes are harvested in a field near Shelley Sept. 27. Idaho potato revenue was up by an estimated 15 percent in 2019, helping to drive a 50 percent increase in the state’s net farm income. 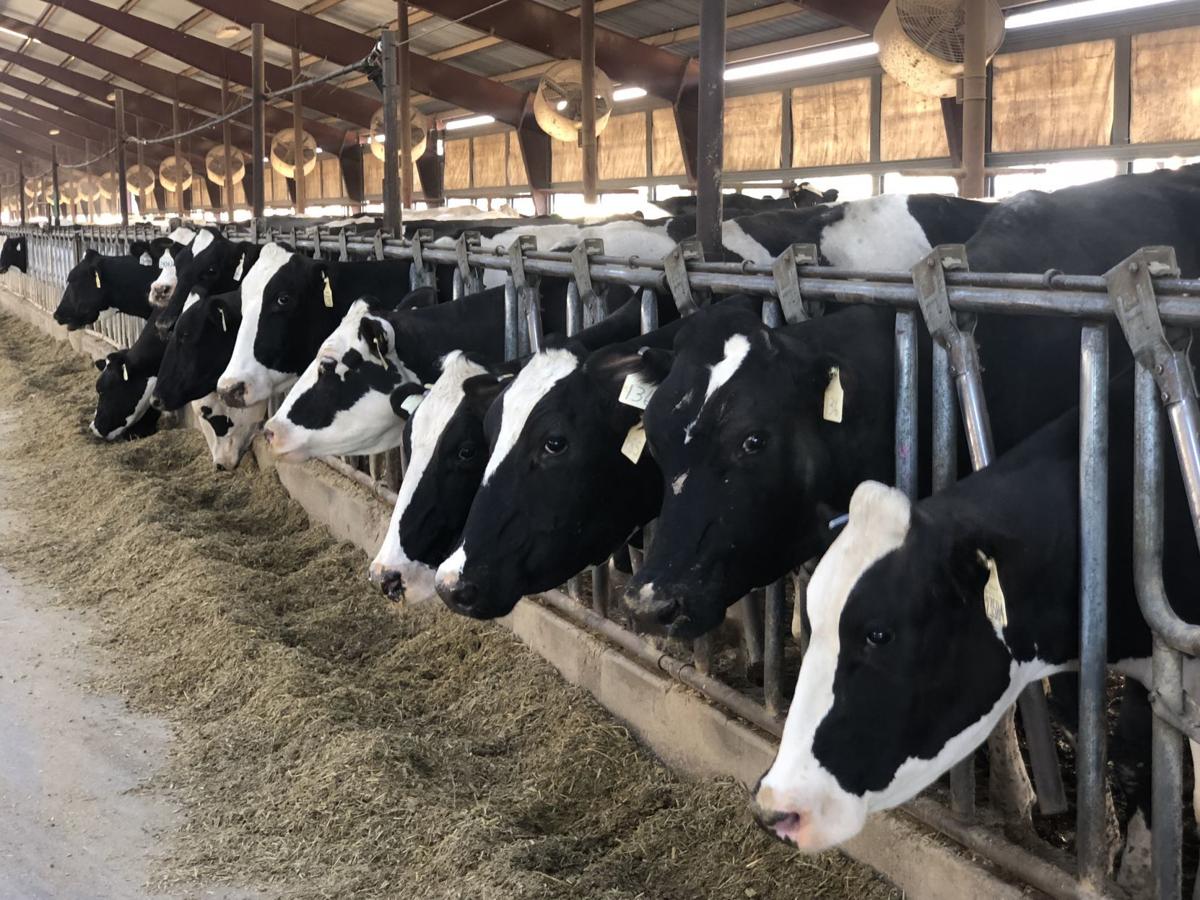 Dairy prices have been strong in 2019, with milk revenue up by 19 percent. Milk the led the way toward increasing Idaho’s net farm income by 50 percent in 2019, according to a University of Idaho report released Jan. 2.

Potatoes are harvested in a field near Shelley Sept. 27. Idaho potato revenue was up by an estimated 15 percent in 2019, helping to drive a 50 percent increase in the state’s net farm income.

Dairy prices have been strong in 2019, with milk revenue up by 19 percent. Milk the led the way toward increasing Idaho’s net farm income by 50 percent in 2019, according to a University of Idaho report released Jan. 2.

POCATELLO — Idaho farmers pocketed 50 percent more profits in 2019 than during the prior year, according to a recent University of Idaho economic report.

Eborn acknowledges he was surprised by the scope of the increase and rechecked his math several times. The state’s 2019 net farm income — which measures cash receipts minus expenses — reached $2.682 billion, up by 50 percent from the $1.789 billion farmers made in 2018 and more than doubling the $1.309 billion they earned during 2017.

“Idaho is an agricultural state. It’s the largest driver in our economy, and when agriculture does well it benefits other industries throughout the state,” Eborn said. “It’s a ripple effect that kind of goes through the economy.”

The agricultural economy’s strong performance was led by Idaho’s dairy industry. Revenue for dairy farmers was up 19 percent for the year to $2.8 billion, even though total milk production in the state was up by 3 percent.

“We are a livestock state,” Eborn said. “Cattle and calves and milk and other livestock are 57 percent of our cash receipts.”

Eborn said lower grain prices have helped livestock feeders, who have adjusted their rations to include more grain and less hay.

The combination of fewer planted potato acres, lower yields and poor 2019 harvest conditions, both in Idaho and nationally, have resulted in a tight spud supply and strong prices. Idaho potato growers will earn an estimated $1.1 billion in revenue for 2019, up 15 percent from the prior year. The state’s production for the year was down 5 percent.

Revenue from cattle and calves, estimated at $1.7 billion, was down by just 1 percent.

Barley revenue for 2019, at $253 million, was up 17 percent, with the average barley price up by 4 percent. Idaho’s 2019 wheat revenue, at $516 million, was down by 1 percent. Eborn said Idaho grain farmers received an extra $47 million during 2019 in federal payments through the Market Facilitation Program, created by the Trump Administration to offset lost exports due to international trade challenges.

“Government payments (to Idaho) were up 22 percent, mainly because of that,” Eborn said. “If you look at export numbers, they really didn’t go down and we still got the payments.”

The state’s hay cash receipts were down by 4 percent, at $404 million. Idaho’s hay production was down by 9 percent, but prices were up by 8 percent.

Idaho’s $46 million in 2019 revenue from dry beans dropped by 39 percent, with growers harvesting 69 percent fewer acres and prices down by 15 percent, compared with 2018.

Both Rick Naerebout, CEO of Idaho Dairymen’s Association, said the strong year for dairy came in the nick of time for many producers.

“It was much needed after a four-year run of losses,” Naerebout said. “I think definitely the positive margins are going to help some of those dairies that were on the cusp of having to make a tough decision to continue their family operations.”

Naerebout said milk income was especially strong during the fourth quarter of the year — especially with cheese prices. He said production challenges elsewhere in the country helped strengthen barrel cheese prices during October and November. Glanbia Cheese makes a lot of barrels in Idaho, so local dairymen benefited, he said. Prices have dropped closer to the break-even point in recent weeks, he said.

Idaho Falls farmer Marc Thiel — who grows crops including malt barley, potatoes for the fresh market and hay and also raises cattle — said 2019 was a good year and “the potatoes will definitely carry the weight.”

“The (potato) market is great,” Thiel said. “There should be a good base under the market all year.”

Thiel said his hay and barley crops brought in slightly more revenue than his break-even point.

“I think everybody is still pretty good from back in the early part of the decade. You have a couple of bang-up years and get equity built up and then spend the next four or five years burning off your equity,” Thiel said.

Eborn emphasized estimating net farm income is not an exact science, and he likened preparing the report to shooting at a moving target. He explained his estimates are based on USDA’s projections for the national economy, which are typically revised several times over the course of the subsequent five or six years.

Looking ahead, both Eborn and Naerebout expect Idaho will experience increasing milk production, and strong milk prices in the vicinity of $20 per hundredweight won’t continue. In 2019, Idaho dairymen added 18,000 head of milk cows to their herds; dairymen are expected to continue adding cows.

“Right now, it’s looking like 2020 will be break-even to a little better than break-even for dairymen,” Naerebout said.

Eborn is optimistic about potatoes heading at the start of 2020. He explained that the tight 2019 crop will account for about 60 percent of 2020 sales. He said returns to growers for spuds are now approaching $11 per hundredweight, compared with $6 or $7 per hundredweight a year ago.

USDA predicts low prices will drive planted wheat acres down to a 100-year low. Eborn anticipates some marginal farm ground may be enrolled in federal land conservation programs, which pay farmers to manage ground for wildlife and erosion control rather than for crop production. Less-productive ground may also be converted to pasture, he said.

Eborn is also optimistic about the beef market, noting U.S. ranchers have stopped growing their beef herds and prices should gradually begin to rise.

Farmers may have to spend more on their inputs in 2020. Eborn noted farm workers are in high demand, and contract labor costs rose 11 percent in 2019. Costs of manufactured farm inputs, such as fertilizer and chemicals, were down about 5 percent in 2019 because flooding prevented many farmers in the Midwest from planting some of their planned corn and soybean acres. USDA expects a large 2020 corn crop, which should place upward pressure on chemicals and fertilizer, he said.

“This year shows how volatile net farm income can be for farmers and how fast things can turn around, too,” Eborn said.