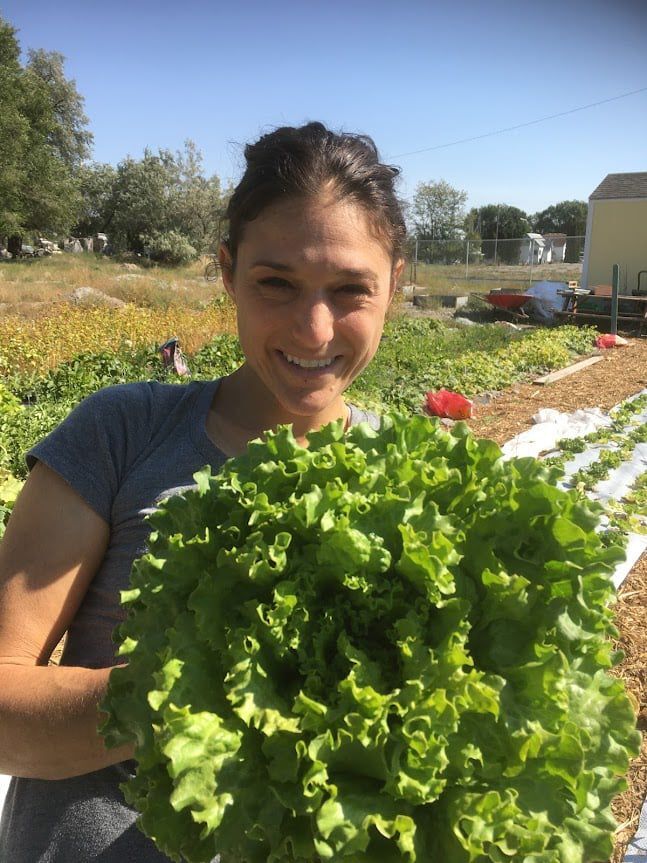 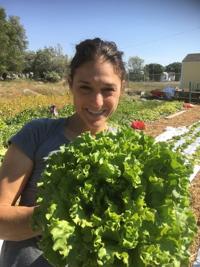 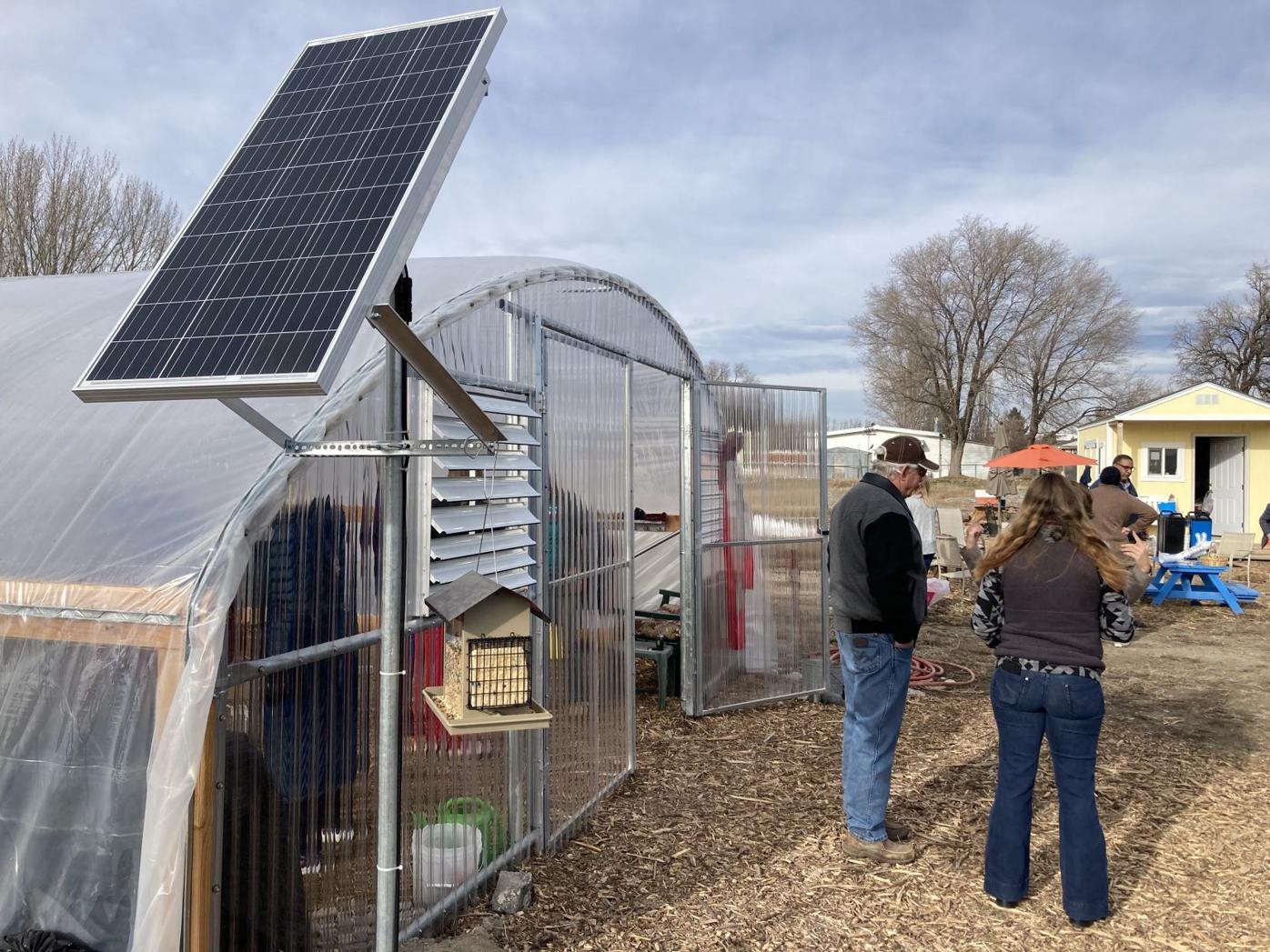 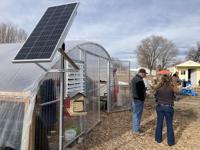 A new high tunnel with a solar panel used to power a ventilation system is in use at Happyville Farm in Idaho Falls.

A new high tunnel with a solar panel used to power a ventilation system is in use at Happyville Farm in Idaho Falls.

Claudia Pine has been passionate about creating urban farms to grow quality local food for much of her adult life.

Years ago, she worked on a food bank farm in Eugene, Oregon, located in the backlot of her church. The project led to a whole series of food bank farms in Lane County.

When working on a Ph.D. at the University of Idaho in soil science in the early 2000s, she got involved in creating an organic farm on the UI campus with other volunteers.

Soon after, she moved to Idaho Falls to take care of her mom. Those early community garden experiences taught her that “putting together partnerships around healthy, quality food is a popular thing,” she says.

“We were relying on the produce provided by local growers and local grocery stories, but the quality and quantity of produce was very uneven,” she says.

They needed a better supply of fresh produce that could be provided year-round.

She wondered if the City of Idaho Falls might have some vacant land for a community farm. She toured some potential sites with Idaho Falls Parks Director P.J. Holm. He showed her a 1-acre piece of property near Hyde Drift Boats and Skyline High School in the center of town. The city used the vacant lot for dumping snow.

“We looked at it in March, and it was an incredible mess,” she recalls. “But I saw an irrigation ditch. The soil was good. It had a southeast exposure for sunlight. It was in the middle of an existing neighborhood. Perfect.”

The property had been donated to the City of Idaho Falls by a developer who built the subdivisions nearby. It took several years, but the Idaho Falls Community Food Basket began developing the site as an urban organic garden; they planted a pollinator garden on site as well.

Joyce Smith, administrative assistant for the East Side and West Side Soil Conservation Districts, toured the urban farm last summer.

The two districts provided $10,000 for the purchase of a high tunnel kit from an Oregon greenhouse company.

High tunnel projects — also known as “hoop houses” — are similar to greenhouses except they are cheaper to build; they have no electrical power or extensive heating and ventilation systems, and they depend on passive solar energy to heat the structure. High tunnels have been growing in popularity nationwide through an initiative by the Natural Resources Conservation Service. Currently, there are more than 14,000 of them that have been built nationwide. Cost-share assistance is available for high tunnel projects through the NRCS Environmental Quality Incentives Program (EQIP).

The high tunnel kit that the Idaho Falls Community Food Basket purchased is 20 feet wide by 48 feet long. They built it with volunteers in about a month. Fall greens, including lettuce, arugula, radishes, kale, chard, cilantro, and four kinds of Asian greens (tatsai, mizuna, yukina savoy, and tokyo bekana) were planted from seed in an outdoor garden plot in late September. Those vegetables have been growing quite nicely under the canopy and enclosed space of the new high tunnel structure since then.

Ribbon-cutting for the Happyville Farm

A ground-breaking and ribbon-cutting ceremony was held on Dec. 4, 2021 when the Happyville Farm was officially christened by the Idaho Falls Community Food Basket, Farm Director Claudia Pine, West Side and East Side supervisors, Mayor Rebecca Casper and Parks Director PJ Holm.

“It was nice to work with the Idaho Falls Community Food Basket and Happyville Farm,” said Matt Woodard, chairman of the East Side District who attended the ribbon-cutting ceremony. “It will allow us to do some tours over there with grade school kids and high school kids, and tie things together for them.

“I was impressed with how it’s working so far. They had a heck of a lettuce crop in there already.”

Wendy Pratt, a Blackfoot cattle rancher who serves on the Idaho Soil and Water Conservation Commission Board of Directors, also was excited to see the high tunnel project.

“There's quite a story behind the donation of the land, the collaboration between the city, the parks and cemetery division, etc.,” Pratt said. “NRCS is testing the soils, the Community Food Basket distributes the produce — all of it is pretty impressive. They hope to create "the most unique park in the region" also on the grounds surrounding the greenhouse with fruit trees and sitting areas.”

Pine points out that Happyville Farm is:

“The Happyville Farm is the perfect example of what can happen when multiple interests come together in partnership to benefit the community,” said Idaho Falls Mayor Rebecca Casper. “We couldn’t be happier with the progress that we’ve seen thus far. We’re very excited to continue to grow and expand in the future.

“This farm benefits our less fortunate through the Community Food Basket, our youth, our seniors and anyone with an interest in learning more about agriculture. It’s really a pleasure to be a part of helping educate others on the importance of agriculture and all of the delicious, healthy things that come from it."

The high tunnel project is benefitting the needy families that depend on the Idaho Falls Community Food Basket for food to feed their families, officials said. “They’re getting fresh-from-the-ground produce that they wouldn’t get otherwise,” said Ariel Jackson, executive director of the Idaho Falls Community Food Basket. “These are fresh food items that families can use to feed their families right away.”

Jackson calls Pine “an amazing volunteer. It’s like a full-time job over there.”

Multiple benefits accrue from creating “working lands” in the city

Pine is super excited about bringing a small-scale farm to the community of Idaho Falls as a way to help educate urban kids and adults about agriculture, help students learn about the potential types of careers in urban or rural agriculture, and create opportunities for students and community members to meet real farmers and ranchers like the board of supervisors from the East Side and West Side Districts and the challenges they face in growing food for the world.

“It’s important to have working lands inside our cities, so we don’t lose our connection to agriculture and growing food for our communities,” Pine says. “Our urban areas are growing, and we’re losing more farm ground to subdivisions, but we can still find the space inside our cities where we can have urban farms and grow local food.”

Pine has personally done that for most of her adult life. She got involved in volunteering for the Idaho Falls Community Food Basket after she learned that they needed donations from urban gardeners like herself. She started by donating carrots, and it’s grown from there.

She is already seeing strong interest in the Happyville Farm from local school kids. The Temple View Elementary School, a school that emphasizes the integration of science, technology, engineering and math education in the classroom, is just six blocks away from the farm. They have been frequent visitors. So have senior citizens who like to stop by from a senior center located nearby.

Some of the Community Food Basket board members are teachers and some serve on the school board. Several volunteers are young adults serving LDS missions locally. “Those kids have been profoundly helpful,” Pine says. “They have made a 1.5 - to 2-year commitment to serve our community.”

“This is a great example of Soil Conservation Districts supporting the urban community,” Pratt points out. “And it's right in the middle of a residential area so that individuals in the area, students, the elderly can all be a part of the projects that go on there.”

The high tunnel project at Happyville Farm will extend the time when fresh local vegetables will be available for the Idaho Falls Community Food Basket, Pine says. If vegetables are planted from seed in September, and then raised in the high tunnel, it remains warm enough inside that the plants will continue to grow and be harvested during the winter months.

On a windy and chilly 14-degree day in Idaho Falls recently, she noticed that it was 68 degrees inside the high tunnel. Solid construction with steel braces and two layers of poly on the exterior allows the structure to withstand the wind, cold and snow. A small solar collector powers an inflation system for the roof of the structure to give it more rigidity from the weather elements, Pine said.

In February, she will be planting more vegetables to get a jump start on the summer growing season.

“We'll be able to start transplanting in seedlings for spring-harvested crops including lettuce and greens, plus peas, spinach, green onions, cauliflower, early cabbage, broccoli, fennel, bokchoy, and more,” Pine says. “They'll be done in May and June, and we'll swap in summer heat-loving crops like tomatoes, peppers, cucumbers, melons and eggplant as well as head lettuce that thrives in the shade from tall vines of tomatoes and cucumbers.

"Then, starting in late August and September, we’ll plant for fall and winter harvest again.”

Tyson Coles, an East Side District supervisor who has a greenhouse on his own farm, likes the project.

“High tunnels are increasingly important for growers, no matter what their size,” Coles said. “The farm has done a lot of good work to provide produce to the community food basket. We at the West Side and East Side conservation districts are glad we could be part of a project that will allow the group to increase the amount of produce they can provide. Having a high tunnel will allow them to start planting earlier, as well as increase the volume of produce they can grow.”

Pine highly recommends the high tunnel projects and encourages others to try them out to extend the normal growing season and produce high-quality produce or flowers.

With a high tunnel structure, “you have the ability to grow the most perfect produce you’ve ever seen,” she says. “If someone wanted to start a business selling perfect peppers or Asian greens, or perfect flowers, there’s a market for those things. I think there’s big potential for people who want to give it a try.”

Steve Stuebner contributes to Conservation the Idaho Way on a regular basis.