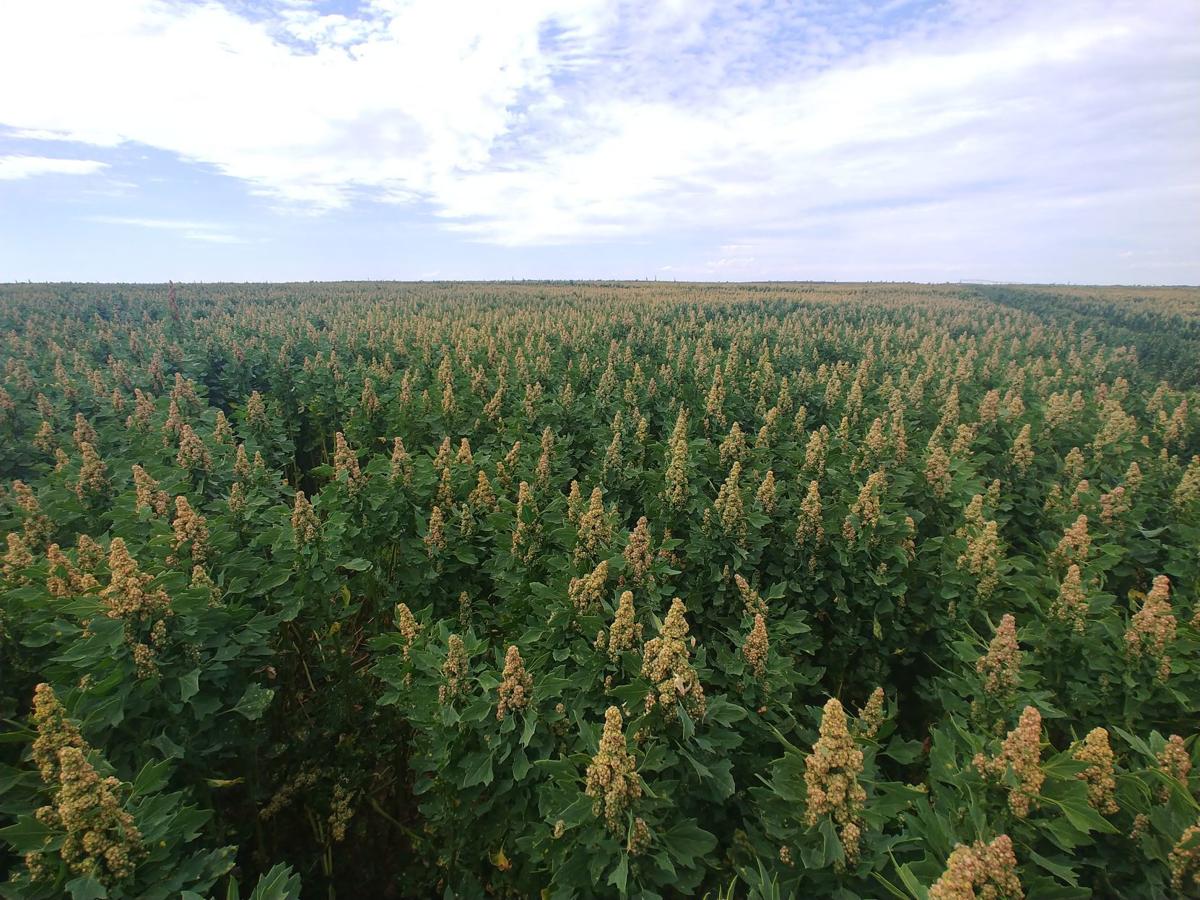 A variety of white-kerneled quinoa, which was bred by Jeremiah Clark of American Mills in Idaho Falls, grows in Eastern Idaho. Clark will soon open a new processing plant in Idaho Falls capable of processing 5 percent of the world’s quinoa supply. 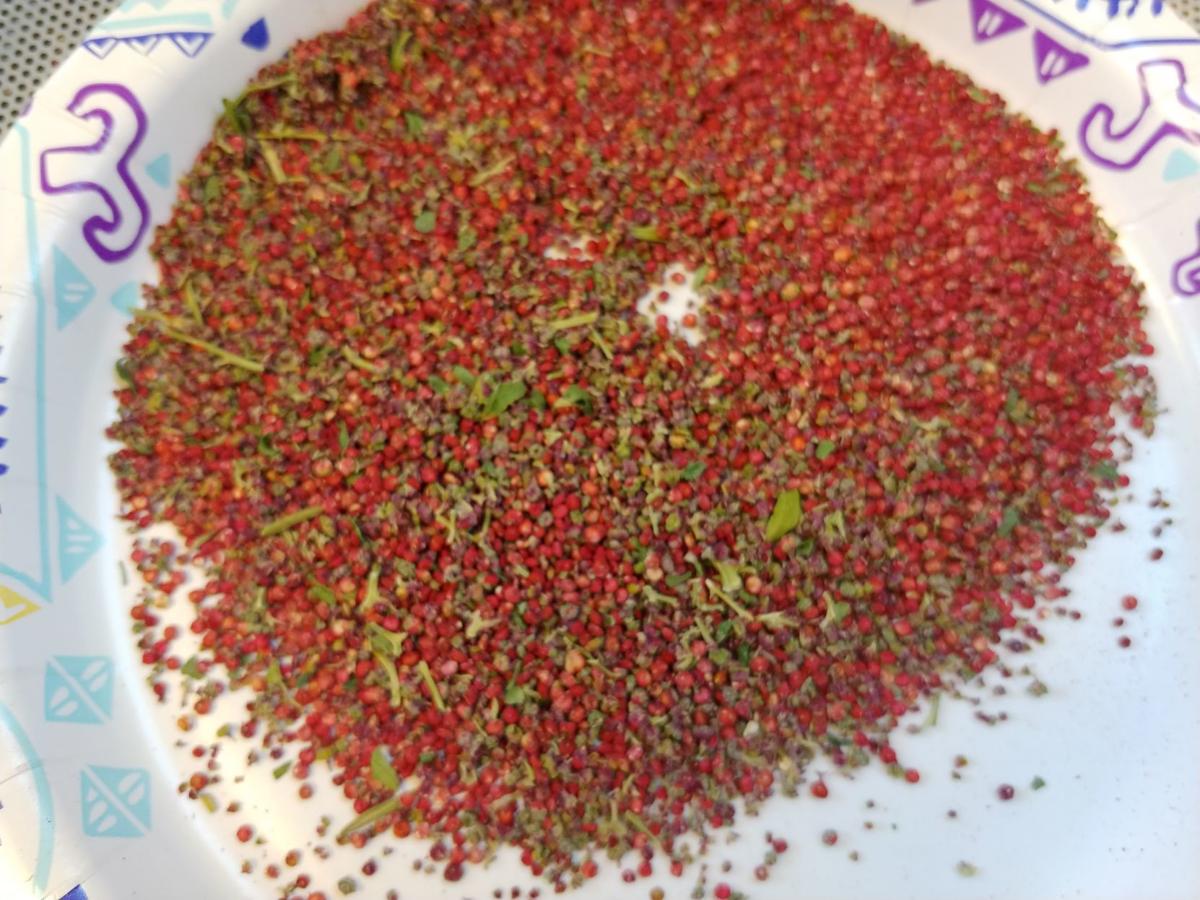 Jeremiah Clark, of Idaho Falls, is developing a new, red variety of quinoa. 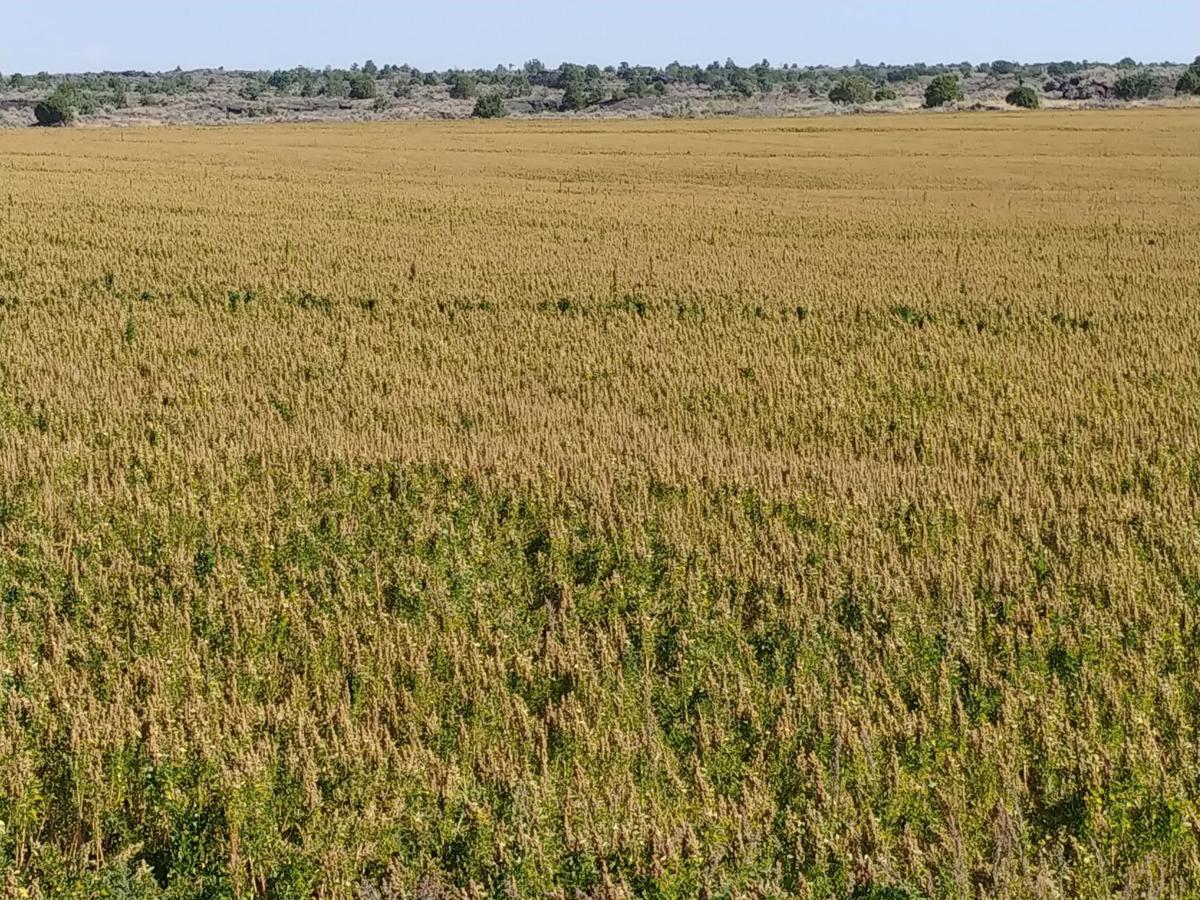 Quinoa grows in Eastern Idaho, which has become the largest quinoa production area in North America. 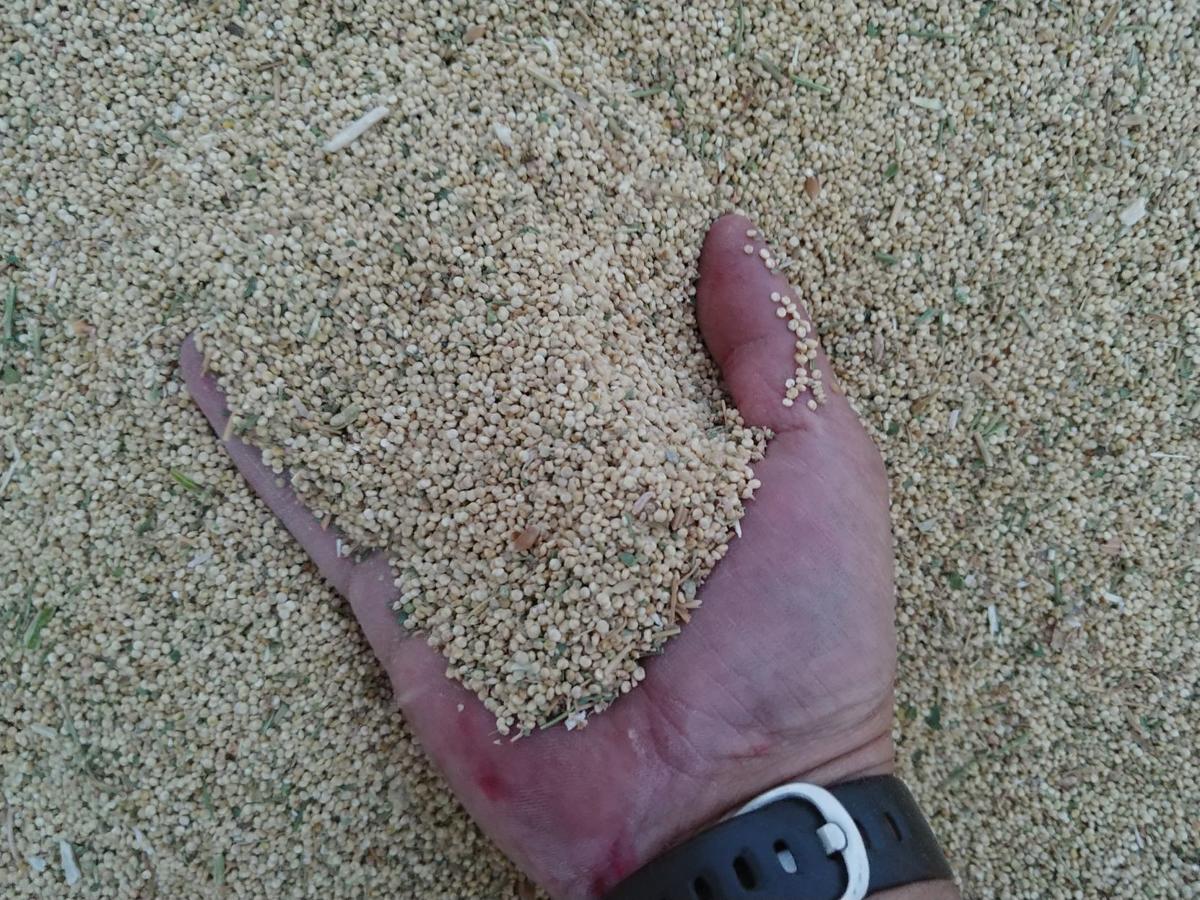 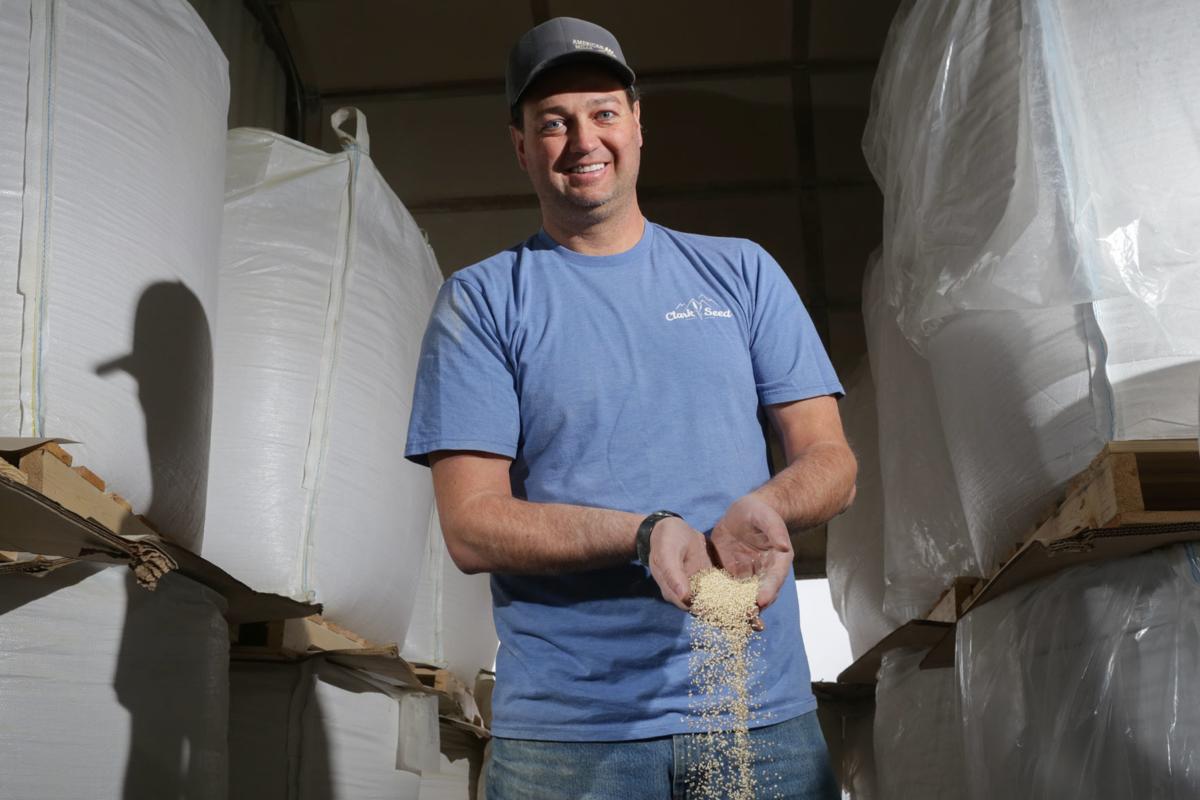 Jeremiah Clark of Clark Seed poses for a photo in the company’s quinoa cleaning facility on Friday, Feb. 22, 2019.

A variety of white-kerneled quinoa, which was bred by Jeremiah Clark of American Mills in Idaho Falls, grows in Eastern Idaho. Clark will soon open a new processing plant in Idaho Falls capable of processing 5 percent of the world’s quinoa supply.

Jeremiah Clark, of Idaho Falls, is developing a new, red variety of quinoa.

Quinoa grows in Eastern Idaho, which has become the largest quinoa production area in North America.

Jeremiah Clark of Clark Seed poses for a photo in the company’s quinoa cleaning facility on Friday, Feb. 22, 2019.

IDAHO FALLS — Local miller Jeremiah Clark plans to soon expand into a new Idaho Falls facility with the capacity to process up to 5 percent of the world’s quinoa supply.

Clark, owner of American Mills, LLC, contracts with 17 growers from American Falls through Ashton to raise his own proprietary variety of the nutrient-rich, pseudo-cereal crop. His quinoa fields range in size from 100 to 200 acres, and he’s already made Eastern Idaho the largest quinoa production region in North America.

He hopes to have equipment installed by the end of October to commence operations at his new quinoa cleaning and sorting plant, located at 2329 E. Endeavor St. behind the Idaho Falls John Deere dealership. The new plant will have 10 times the capacity of his current facility, where he’s still running his 2018 crop nonstop.

Clark has also been working with several growers from his Eastern Idaho network to establish buckwheat as a new rotational crop within the region. Buckwheat is an antioxidant-packed cereal crop that he plans to mill into flour for making noodles and other baked goods. It’s actually a broadleaf crop, despite the inclusion of the word “wheat” in its name.

“One of our quinoa buyers wants us to try (buckwheat),” Clark said.

That buyer has funded equipment for a new American Mills buckwheat processing facility, which Clark intends to build soon in the area. In the mean time, he may soon process buckwheat in his current quinoa facility, which will be vacated when he moves into the larger plant.

Clark said his growers raised between 300 and 400 acres of buckwheat this year in 20- to 40-acre test plots spanning from American Falls through Driggs.

Though quinoa growing conditions were less than ideal this season — cool weather in the spring and early summer slowed plant development — many of Clark’s growers, nonetheless, have enjoyed significant yield gains.

Most of the 2019 crop has been harvested, except for a few fields that remain to be cut in northeast Idaho. Most of Clark’s growers averaged yields of 1,000 to 2,000 pounds of quinoa per acre.

This was the first season in which all of his growers raised a quinoa variety that produces plump, white kernels that Clark bred himself, named after his daughter Kailey. In side-by-side trials last season, Clark said Kailey out-yielded other quinoa varieties his growers planted by 300 to 600 pounds per acres.

Clark is also in the process of breeding his own red-seeded quinoa variety.

Clark emphasized that quinoa is a new crop in the area, and farmers are still learning about pitfalls to avoid.

“There were two or three fields that were complete busts,” Clark said about the 2019 crop. “They had to plow them completely under.”

Competitors have begun to take notice of Clark’s success with quinoa. He said the Scoular Company and Ardent Mills have both planted quinoa in the region for evaluation this season.

Don Trouba, senior director of Go-to-Market — The Annex by Ardent Mills, said his company already has a grower base in Eastern Idaho, and adding quinoa gives them a chance to produce another rotational crop. He said the company started a Colorado quinoa program last year and announced it earlier this year, during the International Baking Industry Exposition in Las Vegas.

“Quinoa is a very popular ingredient,” Trouba said, adding his company is also involved in breeding quinoa. “We are looking not just in Idaho but around the country.”

Scoular officials did not return a request for comment.

Clark believes he has a head start on competitors based on lessons learned since 2013, when he started his local quinoa experiment.

“I think we learned a few more things we could do better for next year. We know what not to do,” Clark said.

Clark said growers like quinoa as another broad-leaf crop to diversify rotations with grass crops such as wheat and barley.

Weed control remains a significant challenge for his growers, who have no herbicides approved for use in quinoa. Growers have been controlling weeds through cultivation and by allowing the quinoa plants to outcompete weed seedlings. Herbicide trials have also been conducted in the region to get products labeled for quinoa.

“They’re waiting for this crop year to get more data,” Clark said of the effort to get a herbicide label approved. “I think it will help out.”

Clark believes the market for quinoa has stabilized following a period of rapid growth in demand. He sells both whole quinoa seed and quinoa flour. He exports quinoa to a few other countries but sells most of his production domestically.