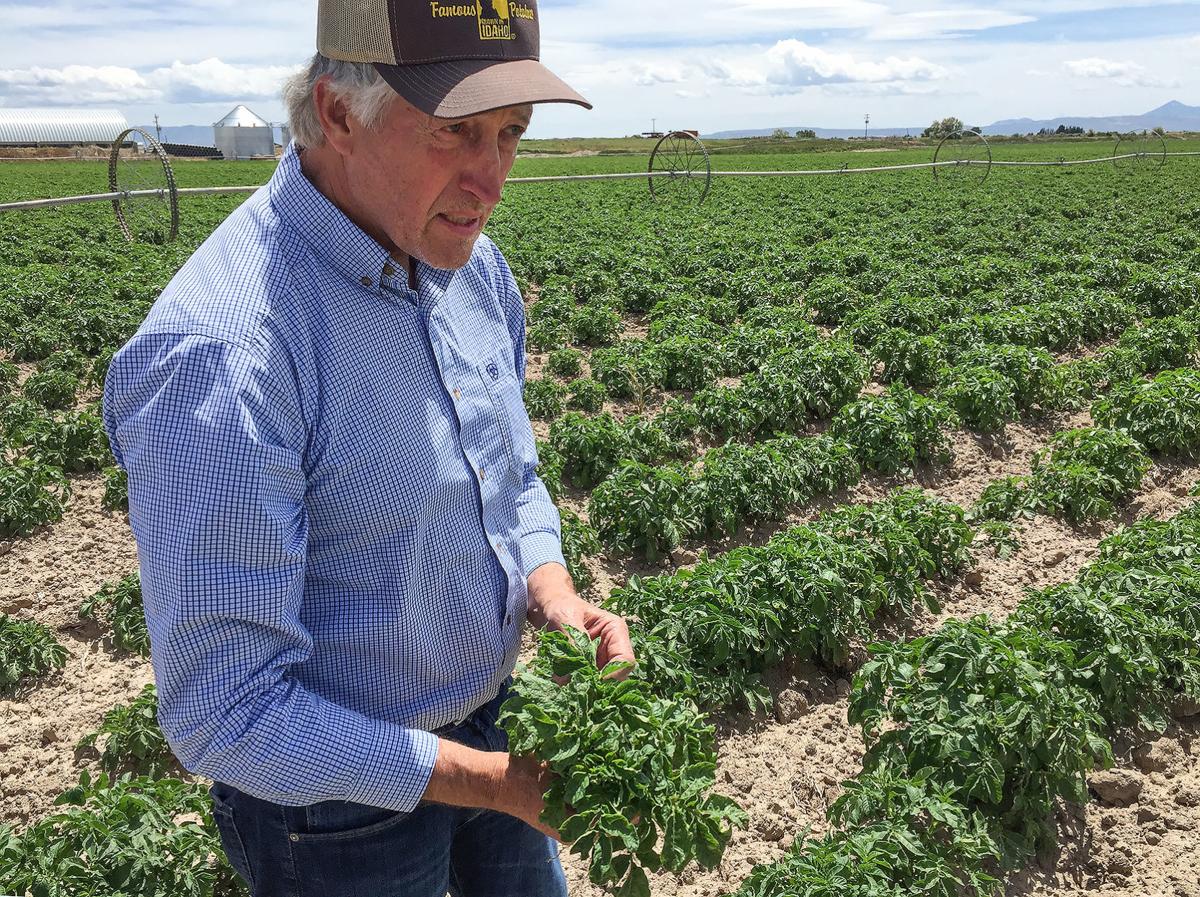 Aberdeen farmer Ritchey Toevs evaluates the progress of his Clearwater Russet crop. The potato variety presents an added benefit in that it doesn’t seem to need fumigation. 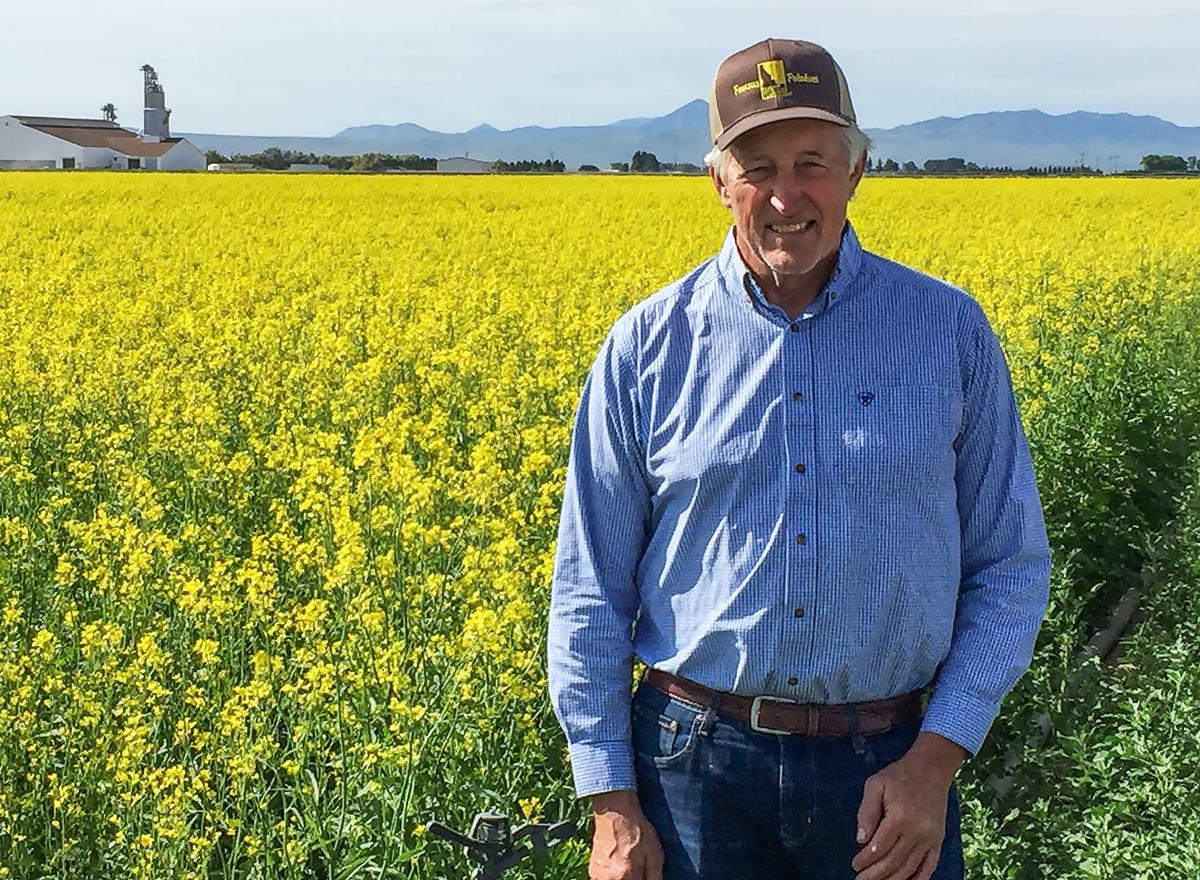 Aberdeen farmer Ritchey Toevs stands in front of a mustard crop at the University of Idaho’s Aberdeen Research & Extension Center. Toevs is raising oriental mustard and evaluating it as a potential natural fumigant.

Aberdeen farmer Ritchey Toevs evaluates the progress of his Clearwater Russet crop. The potato variety presents an added benefit in that it doesn’t seem to need fumigation.

Aberdeen farmer Ritchey Toevs stands in front of a mustard crop at the University of Idaho’s Aberdeen Research & Extension Center. Toevs is raising oriental mustard and evaluating it as a potential natural fumigant.

PLEASANT VALLEY — A local potato farmer believes he can cut back on his use of fumigation by raising two specific commercial crops — oriental mustard and a promising new spud variety called Clearwater Russet.

Toevs has also found he doesn’t need to fumigate potato fields prior to planting Clearwater, which was initially crossed in Aberdeen and has moderate resistance to verticillium wilt, which is spread by the root-lesion nematode.

Clearwater acreage has been on the rise during the past few years, since McDonald’s added it to its short list of approved varieties for making its fries.

Toevs estimates it costs him $200 per acre to apply a metam sodium-based fumigant prior to raising potatoes. He’s in second season of raising oriental mustard, having planted 100 acres in both 2018 and this season.

In the spuds he planted following last year’s mustard crop, Toevs fumigated all but a 30-foot-wide strip extending the length of the field. He’ll compare yields and quality in the untreated strip against the rest of the field to gauge the efficacy of oriental mustard as a natural fumigant.

Toevs is paid a quarter per pound of mustard seed.

“(Oriental mustard) looks like a good crop,” Toevs said. “It’s not as profitable as wheat, but if we can get a benefit in soil health — if we do not need a fumigant the next year — it would be competitive with small grains.”

He takes it as a good sign that he can’t tell any difference between his test strip and the rest of the field at a glance, but he’ll have more definitive data after harvest. Toevs has also found that mustard does a good job of suppressing weeds.

Bill Meadows, owner and founder of Mountain States Oilseeds, said his market for oriental mustard has been increasing every year. His buyers Asia have made three trips to American Falls, and Meadows said they find his growers produce world-class quality.

Some growers plant a special fumigant mustard variety with higher levels of the beneficial chemicals following wheat harvest. The mustard is then tilled into the soil. Meadows believes research is needed to compare the effectiveness of fumigant varieties against commercial varieties that have lower concentrations of the compounds but are allowed to grow in fields for longer durations.

“Is time in the field more important than the level of glucosinolate in the plant?” Meadows asked.

Though Toevs is relatively new at raising oriental mustard, he’s one of the more experienced Clearwater growers. He’s in his third year of raising Clearwater as a named variety and also harvested crops of the spud when it was just a numbered line. He planted 450 acres season for Lamb Weston.

In addition to avoiding the need for fumigation, Clearwater saves him about 9 cents per hundredweight in nitrogen costs, given that it takes in fertilizer extremely efficiently. The tradeoff for raising it is that processors pay a bit less for Clearwater than many other varieties.

Kamren Koompin, of American Falls, has planted 145 acres in his first year of raising Clearwater. He didn’t fumigate the field, and he’s found the variety to be efficient at using fertilizer. He emphasized Clearwater has a high dry matter content, bruises easily and can be tough to store, so it’s important to be careful harvesting the variety.

Data on planted Clearwater acreage isn’t yet available for 2019, but U.S. growers planted 2,446 acres in 2018, with 1,323 of those acres planted in Idaho, Oregon and Washington.

According to the Potato Variety Management Institute, which markets potato varieties developed through the cooperative public breeding programs of the three states, Clearwater producers a high percentage of big tubers, is high in protein, makes an ideal fry color and is resistant to potato virus X and late blight. It’s also moderately resistant to verticillium, common scab and potato virus Y.

The variety is medium to late maturing and can be used both for processing and in the fresh market.

“The acreage is definitely going up,” said Jeanne Debons, executive director of PVMI. “We’re expecting good royalties this year as a result of Clearwater going up and our other (varieties) doing OK.”

Debons noted that Clearwater is the first modern potato variety to be accepted by McDonald’s.

“Every time they release a new varieties they have to be better than before,” Debons said. “The fact that this one has come later means it has advantages in it that aren’t included in the other (approved McDonald’s varieties.)”