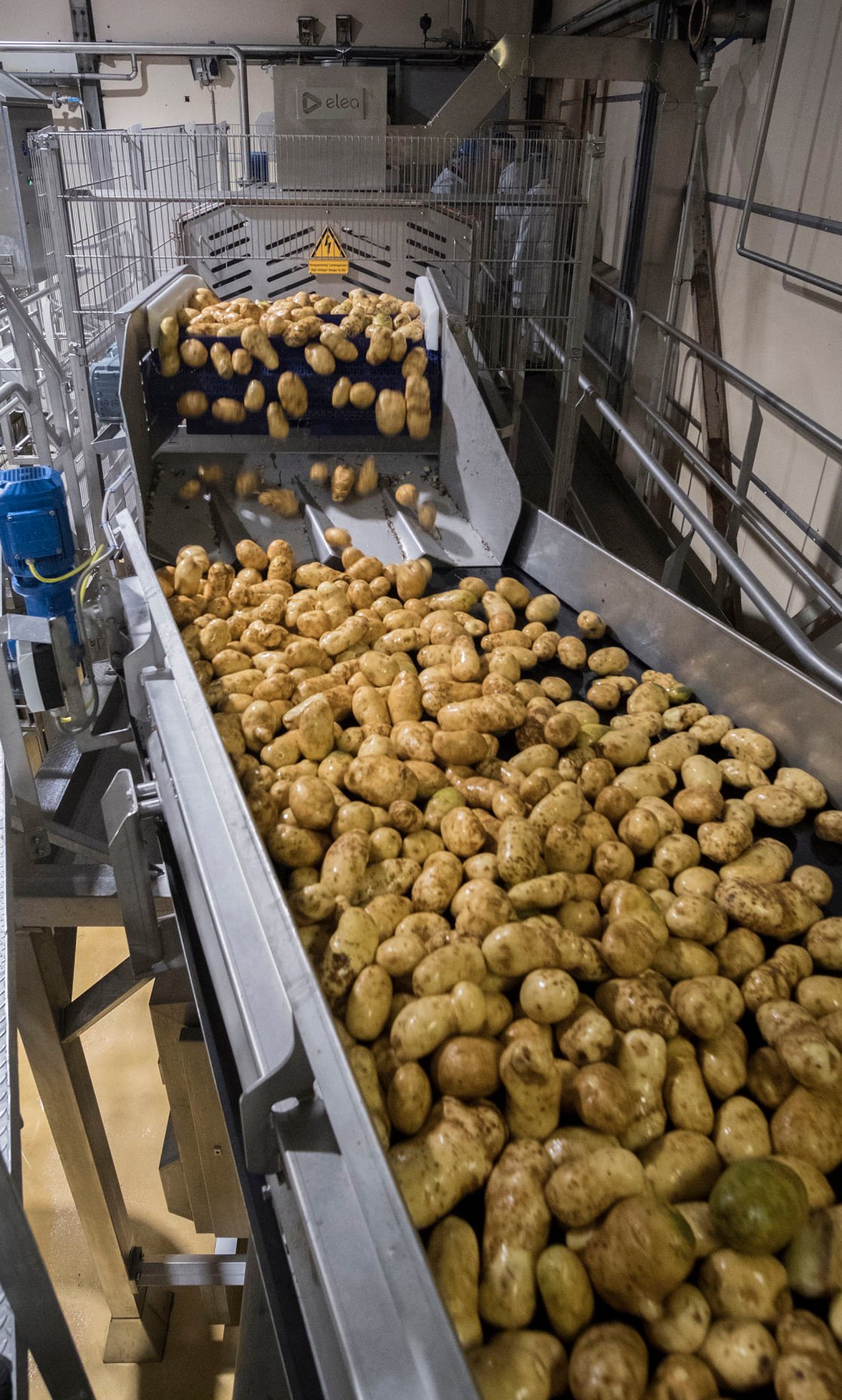 Chipping potatoes exit the Elea B100 after going through the pulse electric field. 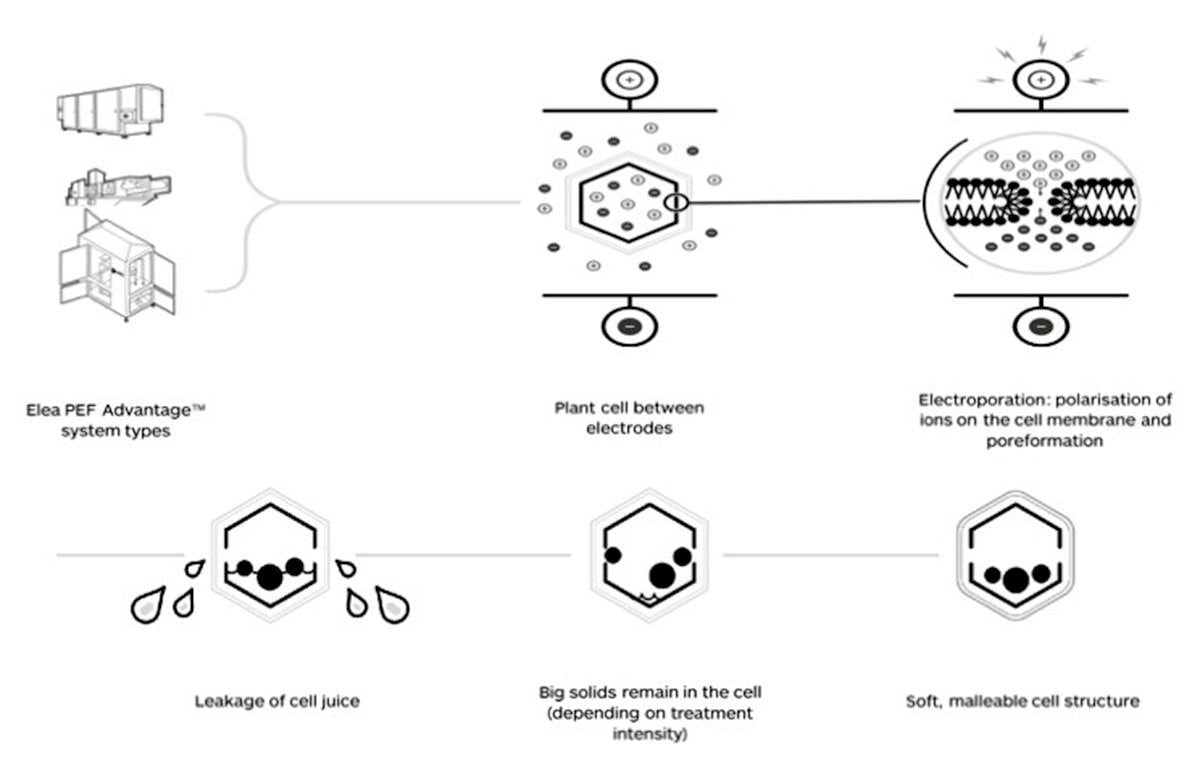 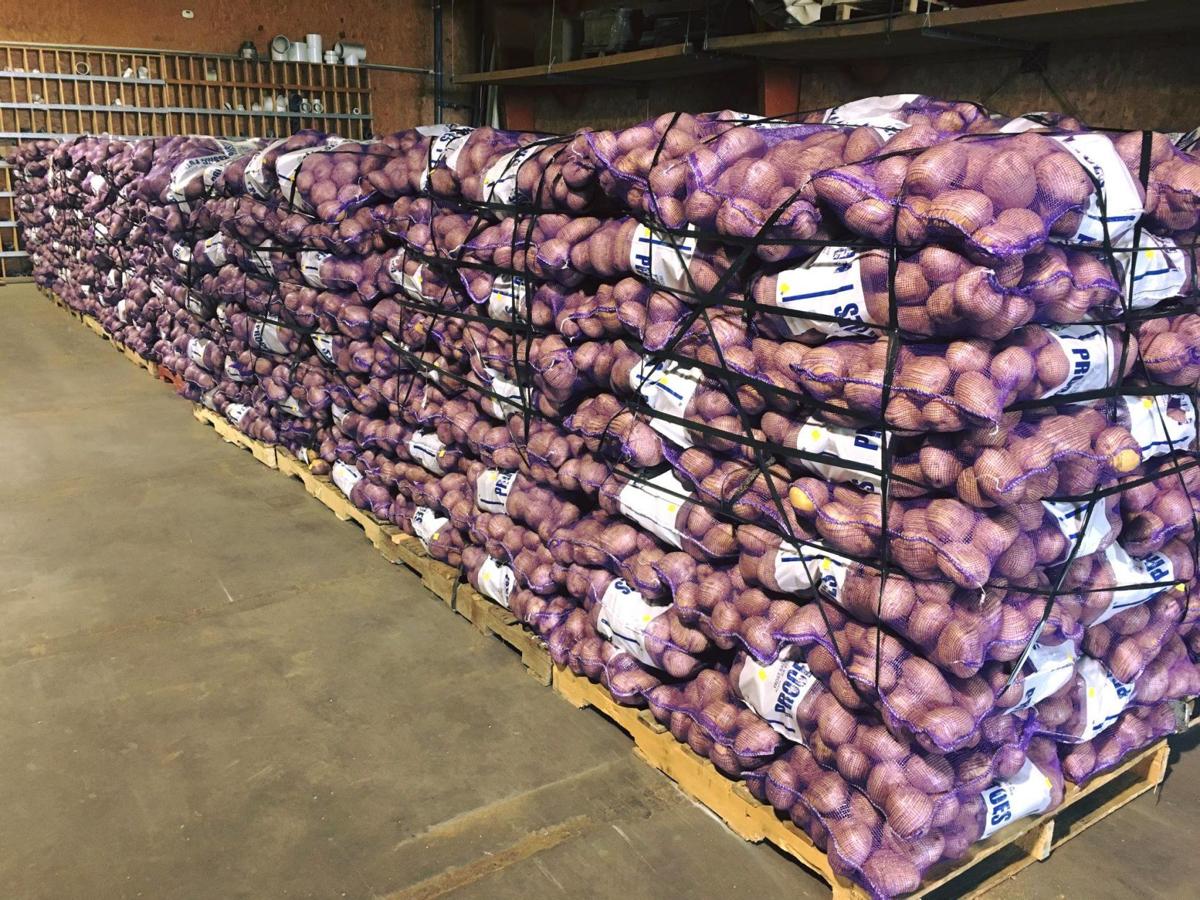 Fresh chipping potatoes are stored in bags at the R&G Potatoes warehouse in Pocatello.

Chipping potatoes exit the Elea B100 after going through the pulse electric field.

Fresh chipping potatoes are stored in bags at the R&G Potatoes warehouse in Pocatello.

Grant funding from the Idaho Department of Commerce could potentially help the Idaho potato industry implement new technology enabling snack makers to fry potato chips at a lower temperature and with less oil.

IGEM grants serve as a bridge for university researchers to collaborate with Idaho private sector businesses and through these partnerships enhance, cultivate and potentially establish new economic opportunities in the state.

The IGEM grant was awarded on Feb. 23 to BSU researcher Owen McDougal, Ph.D., and Food Physics to research and advance development of PEF technology on reducing sugars and amino acids in potatoes, ultimately resulting in a potential reduction of acrylamide in the production of potato chips. Acrylamide, which has been identified as a possible carcinogen, is a chemical that can form in some foods during high-temperature cooking from sugars and an amino acid naturally present in food.

Food Physics is the exclusive licensee of PEF technology systems for North America, Ireland and the United Kingdom, working with the German company DIL and its food technology partner Elea. Jim Gratzek is the technical director and Carl Krueger is the head of engineering for Food Physics in Boise.

PEF technology exposes vegetable cell walls to short, micro-second bursts of electricity as it passes through a water bath. The pulse electrical field creates a permeability and tissue softening of the cell wall resulting in leakage of cell juice and a loss of reducing sugars and amino acids.

The technology was first discovered in the late 1950s by German engineers. It wasn’t until the 1990s that applications in cell permeability and food processing were first developed in Europe.

With refinement of PEF technology at this time came the first industry use by french fry manufacturers in Europe. In the first decade of the 21st century the technology was adopted by multi-national companies globally. Today, PEF technology is considered to be the industry standard in french fry production throughout the world.

The adoption of this new technology by french fry producers over the past decade has resulted in notable advances in sustainable measures in less use of water, energy and frying oil along with complementary savings costs.

Evidence of PEF’s money savings in sustainability can be found in a 2014 report from Simplot Australia. The document cites a global savings of over 300 million liters of water and 100,000 gigajoules of energy using PEF technology in their potato manufacturing process.

According to the report “the conventional method of potato cutting involves a step where the potatoes may be submerged in hot water in excess of 50 degrees (122 degrees) for more than 40 minutes.”

The report stated that using PEF technology they were able to replace this pre-heating step. PEF advantages cited by the report included reduced energy and water costs along with better cutting quality, higher yield and no negative impact on potato texture.

The IGEM grant will be used by McDougal, who is chairman of BSU’s chemistry and biochemistry department, working with Food Physics to research the impact of pulse electric field (PEF) technology in potato processing production with an emphasis on chipping potatoes but also including other root vegetables. McDougal said that the funding will be used to hire people to aid in the research.

“We’ll be able to hire a Ph.D. scientist that will be able to work between Food Physics and Boise State,” he said. “(The position) will be an integral liaison to bridge the scientific gap between the private industry and the academic environment.”

McDougal said that the grant will also provide job opportunities for BSU students and help prepare them for future employment.

“The students that work on these types of projects, it’s research that is direct relevant value for industry so they gain skills and training that’s directly applicable in the industrial setting,” he said.

For Food Physics the grant is an opportunity for the company to market a technology to the potato chip and snack industry that has become the industry standard by french fry producers.

“The luxury that this grant provides us is to kind of go deep for a company that frankly doesn’t have the financial firepower yet to go that deep,” Gratzek said. “Big companies have people who can do this and frankly they have labs, we don’t.”

Ongoing technological advances in food processing techniques have resulted in advances in sustainability measures, along with a complementary reduction in acrylamide.

Gratzek is cautious when discussing the impact PEF has on reducing the amount of acrylamide in fried foods. He presents PEF as a “technique when applied with other things” that can lower acrylamide levels.

“Not that PEF drops acrylamide but PEF changes say the leaching phenomenon into water, which it does, it also changes the frying rates, which it certainly does, both of which will lead to lower acrylamides,” he said.

“Sugar, temperature, time, moisture level — those are all the inputs for how much acrylamide you get at the end of a frying process,” Gratzek said.

The reduction of solids in the form of reducing sugars and amino acids allows potato processors to replace or reduce the amount of hot water blanching or pre-heating in french fry and chip production.

“If blanching is used to soften alone, (PEF) can eliminate the blanching process,” said Gratzek.

Another cost saving advantage is the reduction in the wear of the cutting blades used in the fry and chip making process. The PEF technology softens the cell walls making potatoes easier to cut.

“The cutting is much more smooth, so you’ll have a lot less what’s called specific surface area,” Gratzek said. “So that can be coupled with the fact that the water comes out much more readily and with less energy leads to lower oil absorption into the french fry or the potato chip. It’s over a magnitude of 5 to 10 percent. It’s not huge and the process changes, and this is something I hope to study with Owen, how you conduct that frying.”

Carl Krueger said that a common thread of concern among food manufacturers when considering new technology is what is known in the food industry as ‘mouth feel.’

Mouth feel is a term used to convey that quality unique to a specific brand. Whether it’s the secret formula or secret sauce, companies are extremely protective of their brand identity and preserving customer loyalty.

Think of the ‘New Coke’ introduction and ensuing tsunami of customer outrage that the Coca Cola Company faced following New Coke’s introduction in 1985. That is the kind of public relations fiasco no company wants to replicate.

“We actually ran into that with a large food service customer who didn’t want their product to change because we were changing technology,” said Carl Krueger.

Krueger said that they were able to prove in a sustainable fashion that the PEF process would produce the exact same french fry that they had always produced.

Gratzek believes that advances in PEF technology will help main stream its acceptance in the chip and snack industry in the future but he also recognizes that the food industry is not always quick to accept innovations.

“Technology adoption in industry, especially the food industry, is typically pretty slow,” he said. “It has to solve a significant problem bring significant value in terms of new product, new innovation or it has to save a lot of money.”

Gratzek thinks that one of the reasons why PEF technology might be adopted faster in the future is because they’ve developed the knowledge and application techniques that typically is kept in-house by the chip manufacturers.

“I think that this grant is especially helpful for us in that it will allow us to do the research in Boise and Boise State such that we can with great specificity solve the issues that the customers have,” Gratzek said.

Gratzek said that approximately 20 of the PEF processors have been sold Europe and he suspects that the reasons for the purchases are three-fold.