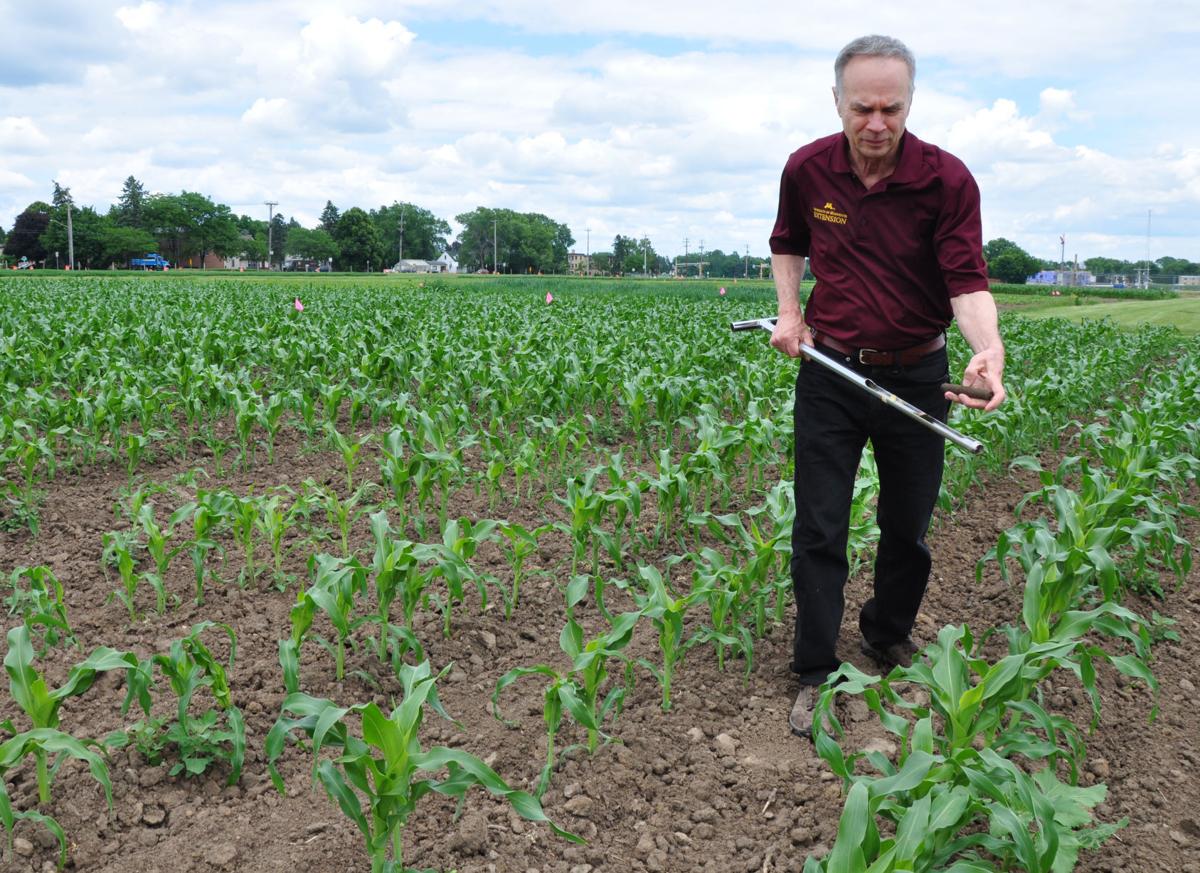 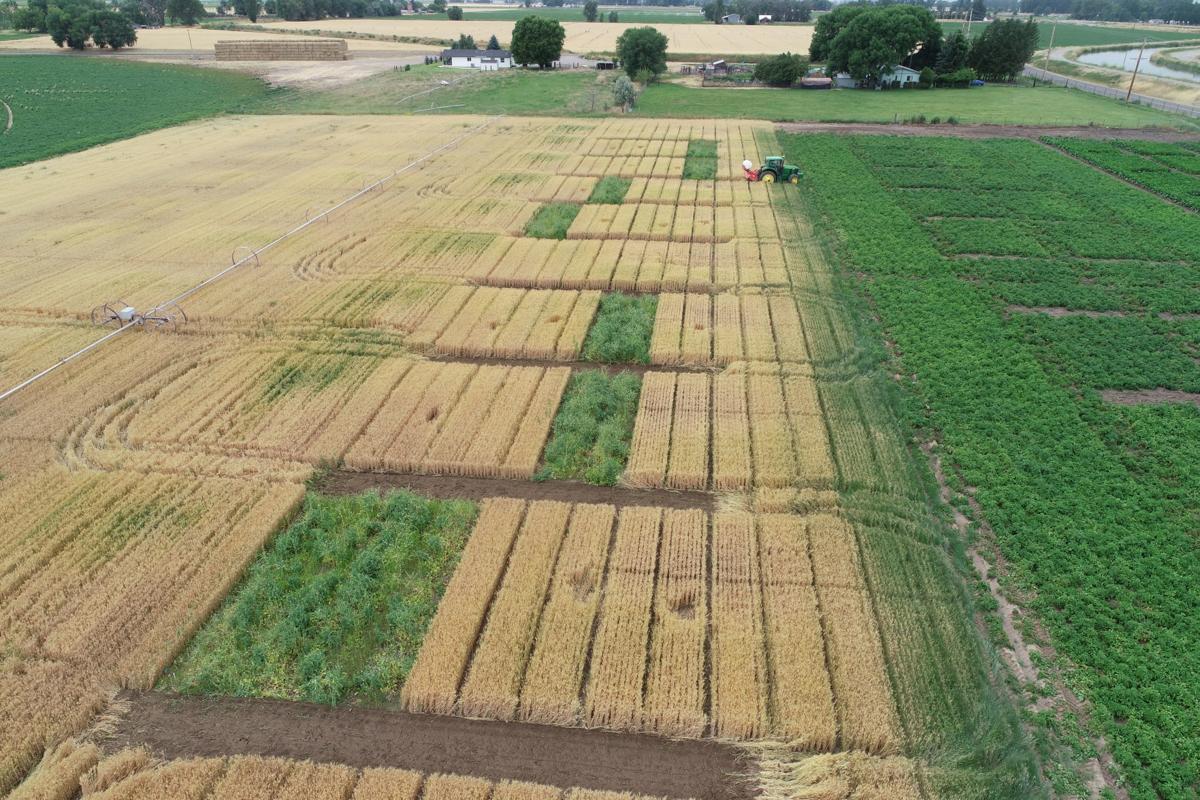 Trial plots planted in 2019 at Miller Research in Rupert are part of the first year of a four-year, multi-state research project to evaluate how various treatments affect soil health in potato rotations.

Trial plots planted in 2019 at Miller Research in Rupert are part of the first year of a four-year, multi-state research project to evaluate how various treatments affect soil health in potato rotations.

RUPERT — It’s called the kitchen sink treatment among the scientists involved in a four-year, 10-state research project analyzing how to replenish depleted soils in potato rotations.

Essentially, the researchers throw “everything but the kitchen sink” into improving soil health in their plots — fertilizing with composted dairy manure and planting a crop as “green manure” between rotation crops. Green manure maintains living roots to limit erosion and to “leak” additional nutrients, before being plowed into the earth to further boost organic matter.

The research project — heading into its second season in major potato production states including Idaho — is evaluating more than a dozen treatments in two- and three-year potato rotations. The goal is to determine which treatments are best at boosting soil health, what makes them work and whether or not they’re cost effective.

“You hear a lot of people talk about the need to improve our soils, and I believe that’s true — I don’t know any grower who doesn’t want to improve their soils — but in the end it’s got to pay for itself,” said Jeff Miller, who is maintaining trial plots for the project at Rupert-based Miller Research.

“A lot of growers are doing green manure and seeing tangible benefits. Is it microbes of the soil or a change in the physical properties of soil? Those are questions we hope to answer,” Miller said.

Miller explained his plots will be planted both with and without soil fumigation, which is highly effective at wiping out soil pests but also eliminates beneficial soil life.

Organic matter is a good indicator of soil health, and some of Idaho’s sandy fields have a paltry 1 percent organic matter. However, Miller believes Idaho’s ideal growing environment goes a long way toward offsetting soil-health deficiencies.

“With the tools available (Idaho farmers) are able to raise really good crops on soil that would be considered marginal,” Miller said. “We grow the highest yields with some of the highest quality potatoes in soils that have some of the lowest organic matter in the nation.”

Miller said specific soil-health treatments may also come with barriers preventing some growers from adopting them, such as high fertilizer costs or scarcity of water to irrigate extra cover crops — which are crops planted solely for soil-health benefits.

University of Minnesota soil scientists Carl Rosen is spearheading the grant. Both Rosen and Thornton are scheduled to speak about the project at 8:30 a.m. Jan. 23 at the Idaho State University Pond Student Union Building’s theater during the 52nd annual Idaho Potato Conference.

“In a lot of our production systems we talk about chemical inputs, fertilizer and some of the physical properties of soils, but we often neglect what’s going on in the biology of the soil,” Rosen said. “We’re really looking at how to improve the biology so we have better nutrient cycling and better disease suppression.”

Rosen said soil samples from trial plots involved in the project will be sent to his university, where the microbiome and DNA will be measured using new laboratory techniques. There will also be conventional soil testing of clay, organic matter, nitrogen in a protein form, PH and carbon dioxide respiration, which provides evidence of microbial activity.

Rosen said some of the plots that aren’t fumigated will receive bio-fumigation treatments. For example, mustard will be planted in some plots as a cover crop for its biocidal properties. Other treatments will evaluate using mustard in combination with reduced fumigation.

To add “real-world” data, samples will also be evaluated from up to four farm fields per state, covering a variety of different soil-health practices. For example, Rosen said one participating farmer in Minnesota will provide samples from a field in which he’s never raised spuds for comparison against soil in a long-time potato field.

Agricultural economists will conduct a cost-benefit analysis of treatments. There’s also an outreach component: Materials will be developed specific to the Pacific Northwest and the Midwest and East to educate growers about findings.

The research will evaluate production of Russet Burbanks and Russet Norkotahs.

“There are some key principles to improving soil health, and they don’t necessarily match up with the way we produce potatoes,” Rosen said.