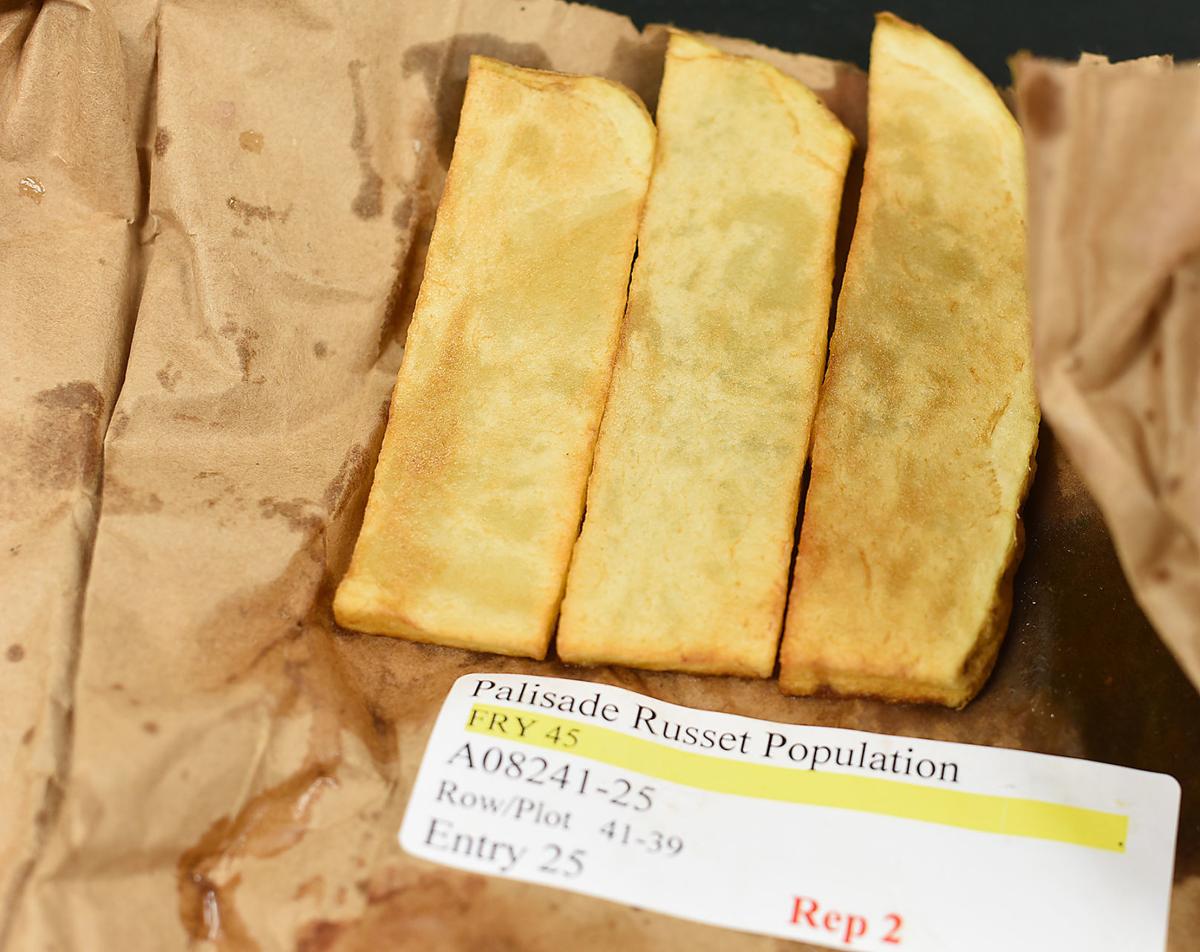 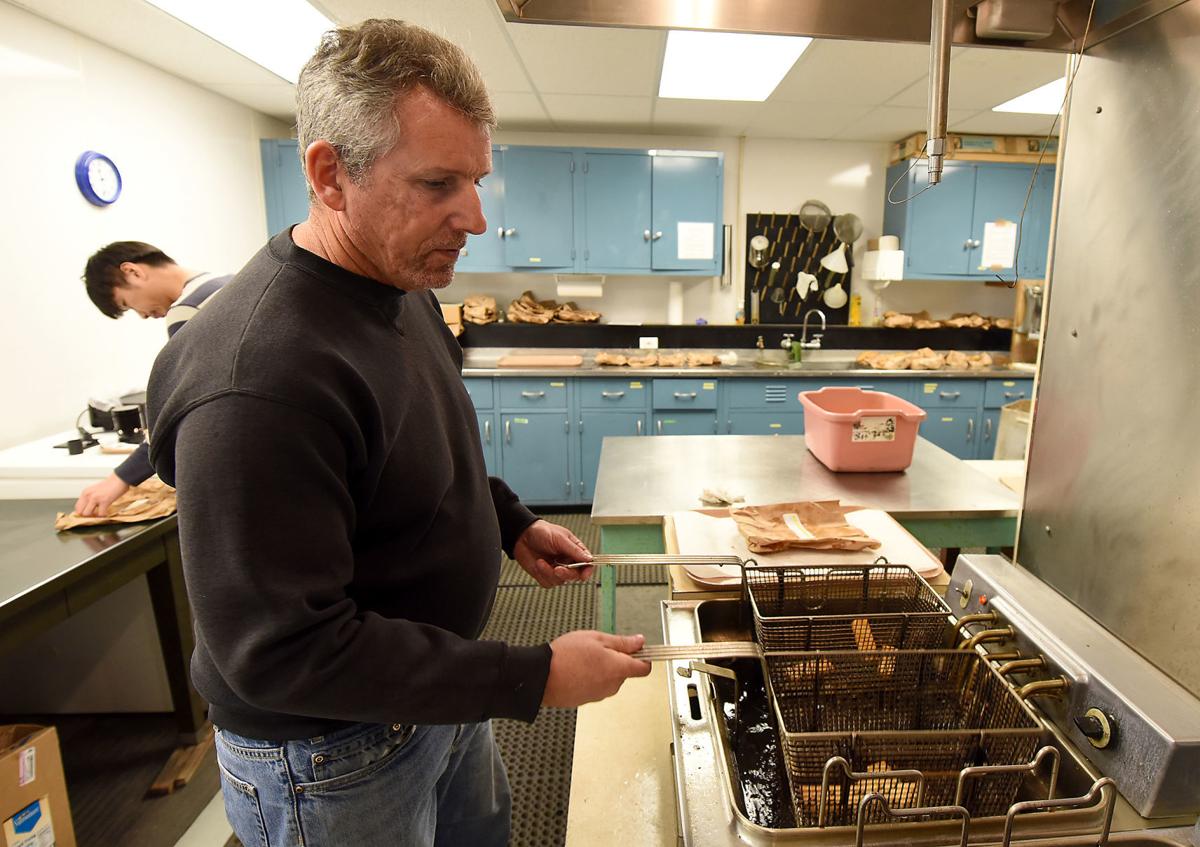 Brian Schneider pulls two baskets of french fries out of the deep fryer. 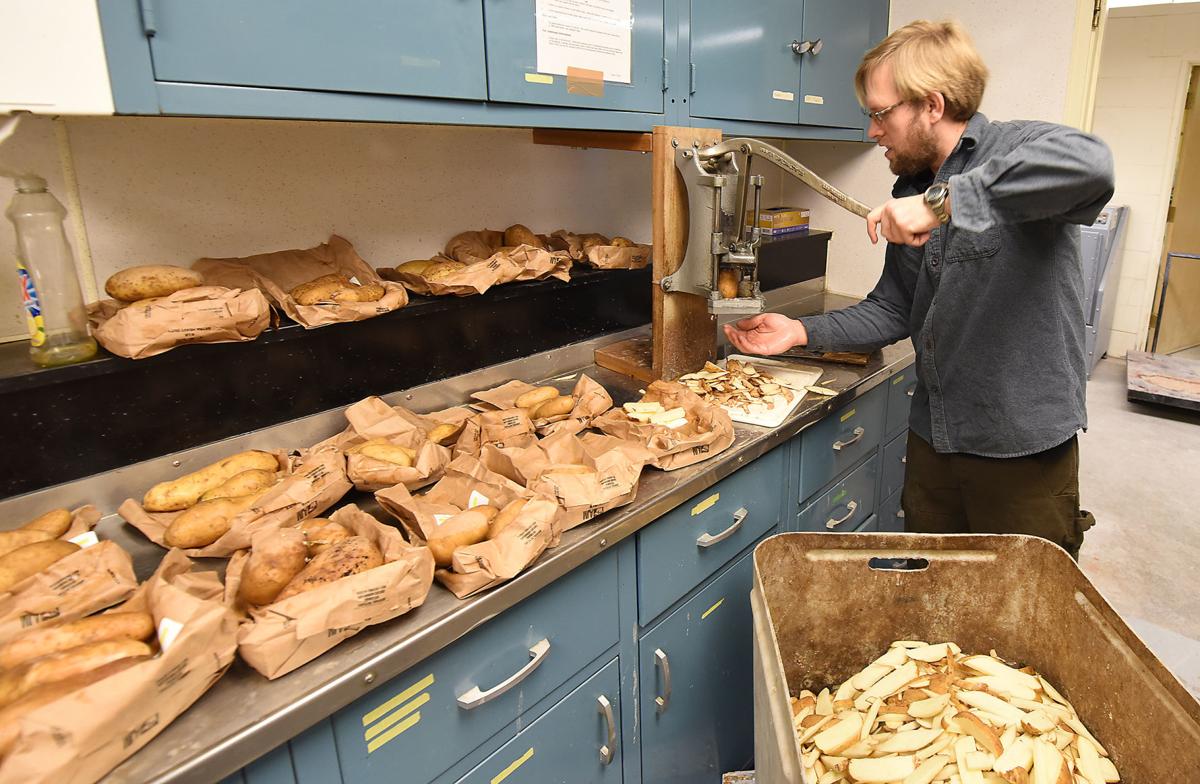 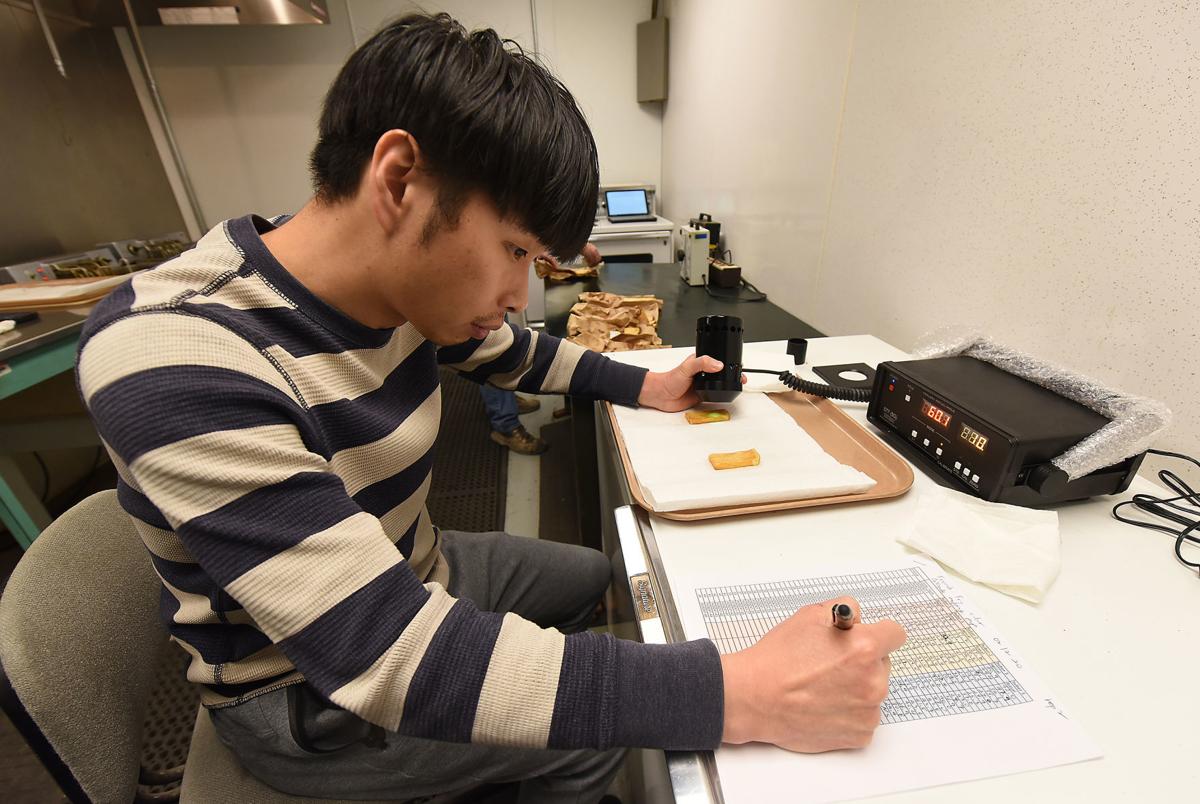 Jae Park, Ph.D., measures the light reflectance of a french fry using a coloring meter as part of his esearch studying the cold sweetening resistance of potatoes.

Brian Schneider pulls two baskets of french fries out of the deep fryer.

Jae Park, Ph.D., measures the light reflectance of a french fry using a coloring meter as part of his esearch studying the cold sweetening resistance of potatoes.

It’s that time of year in Aberdeen when the pungent aroma of deep-fried french fries wafts through the hallways of the Marshall building on the campus of the University of Idaho’s Aberdeen Research & Extension Center.

For about three weeks, eight hours a day, with the clockwork-like efficiency of a quick-service restaurant, three men go about their business making french fries in the building’s basement.

Ian Fullmer starts the process by washing Russet Palisade potatoes and then cutting the spuds into thick-cut french fries. Brian Schneider then drops the french fries into the deep fryer, pulling the wire basked out at the sound of the timer and subjectively grades the fries on a scale of one to four for their color. Finally, Jae Park uses a coloring meter to measure the “reflectance” value of each of the fries, quantifying how dark they become.

An estimated 60 percent of U.S. potatoes are grown for the processed frozen market, which is a dominant player in the potato industry. That market segment includes french fries, potato chips and dehydrated products, with 30 percent destined for the french fry market.

Researchers are constantly seeking new means to not only improve the quality of process potatoes, but also to reduce the number of inputs used in cultivation and storage of these tubers.

Research scientists Rich Novy and Jonathan Whitworth are overseeing these fry trials. Novy is a research geneticist specializing in potatoes and Whitworth is a potato plant pathologist for the USDA-Agricultural Research Service in Aberdeen.

According to Novy, the trial’s purpose is to isolate potatoes with cold sweetening resistance qualities and to develop potatoes with better profiles for the process industry.

The problem with storing potatoes at lower temperatures is that the starch in potatoes converts into sugars such as glucose and fructose. Those sugars result in darker french fries.

“We work pretty closely with all the major processors — McCain, Simplot, Cavendish, Lamb — it’s important that we have an idea on how well a lot of our breeding clones as they advance in the program, how well they process,” Novy said. “And a big push in our program, and I’d say in North America, any program that’s working with processing russets, is looking at cold sweetening resistance.”

Potatoes such as the Russet Burbank, Ranger Russet and others popular for french fry processing are often kept in long-term storage at between 48 degrees and 50 degrees.

“We’re looking at cold sweetening resistance where rather than having those dark fries even where we’re storing at 45 degrees or 40 degrees, you can still have very light fries coming out, whereas with Burbank at those same conditions would be black,” Novy said.

Novy said that two additional benefits occur when storing at lower temperatures. One is the prevention of some storage diseases, and lower temperatures also prolong tuber dormancy resulting in reduced incidence of potatoes sprouting.

“If we can store at colder temperatures that’s a big benefit because you prolong tuber dormancy and have less sprouting,” Novy said of the trial’s potential for the processing industry.

With the European Union banning the use of sprout inhibitor chlorpropham (CIPC) at the start of this year, there is an increasing demand for cold sweetening resistance varieties within the potato industry globally.

Jae Park’s research project is to find the gene location associated with a certain genotype or traits related to french fry color and other genotypes related to disease or tuber profiles.

Using 20,000 single nucleotide polymorphisms (SNP) as genetic markers to segregate the variants of each potato, Park is able to develop a linkage map isolating potatoes exhibiting lighter fry color traits stored at lower temperatures. Those potatoes are then selected for another year of planting and testing to isolate and cultivate the preferred genotypes for cold resistance sweetening.