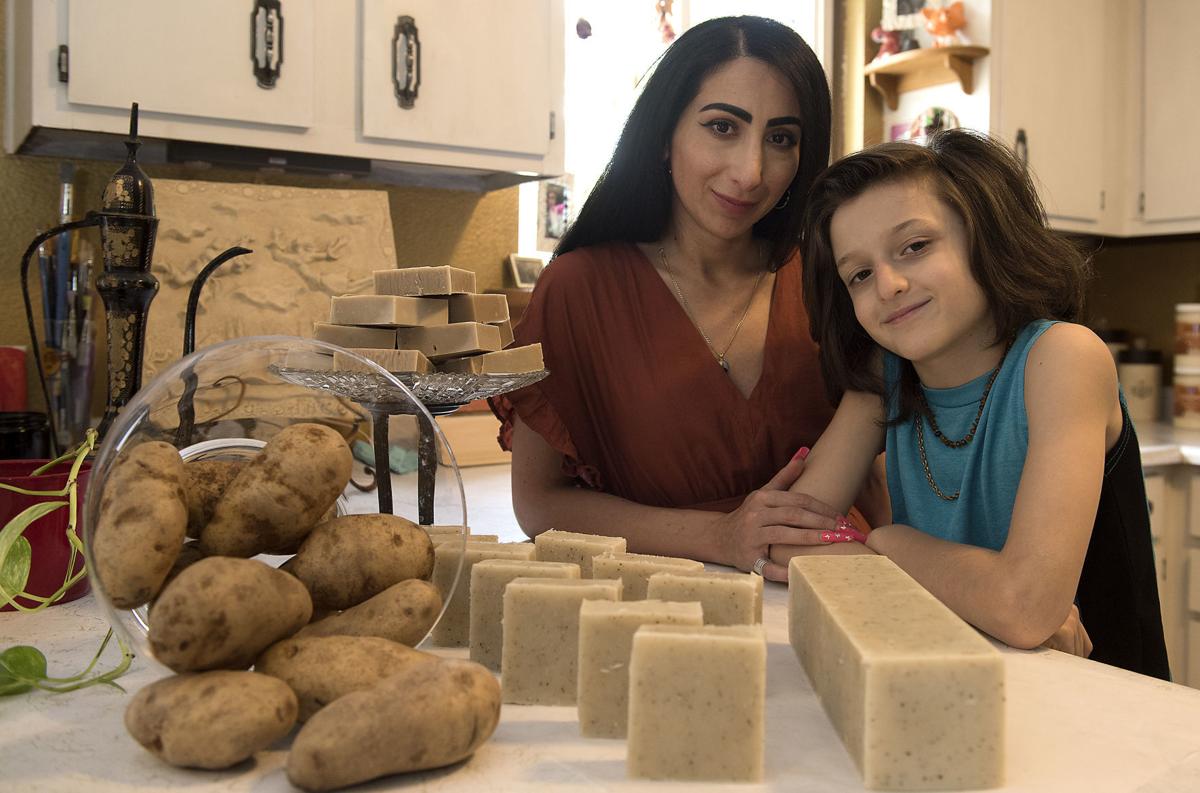 Liyah Babayan and her son, Dominic Babayan, 10, pose with a collection of Make Peace soap bars. 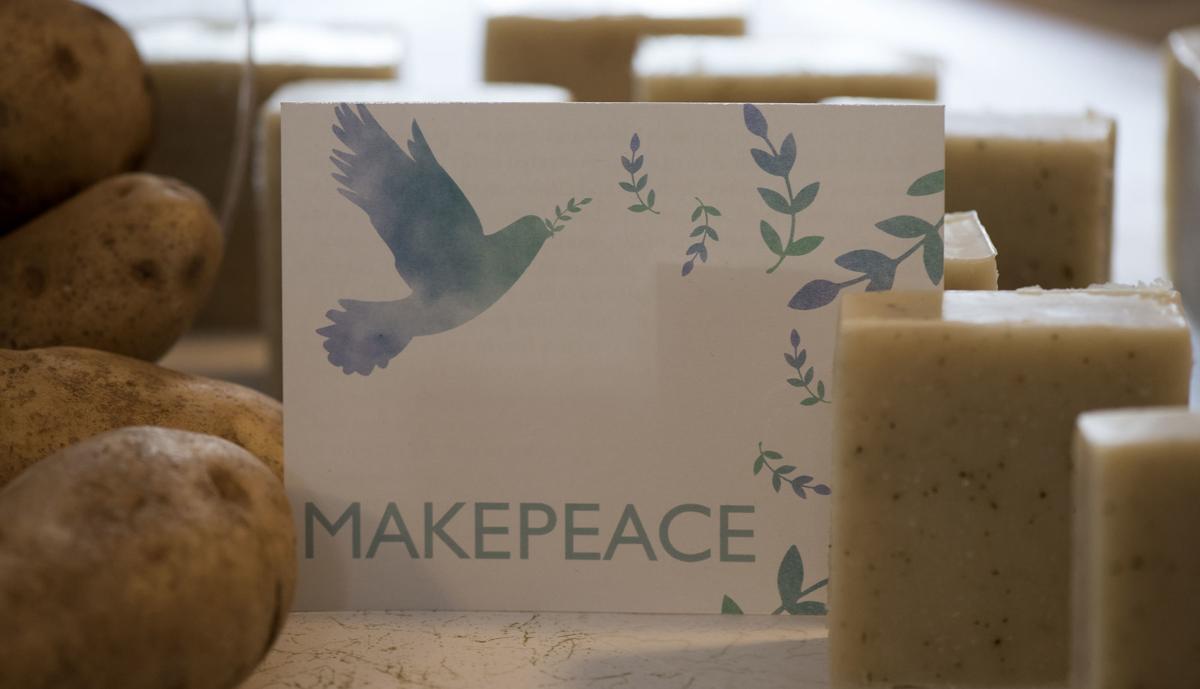 Make Peace soap, made with Idaho potatoes, raises funding to help displaced people around the world. 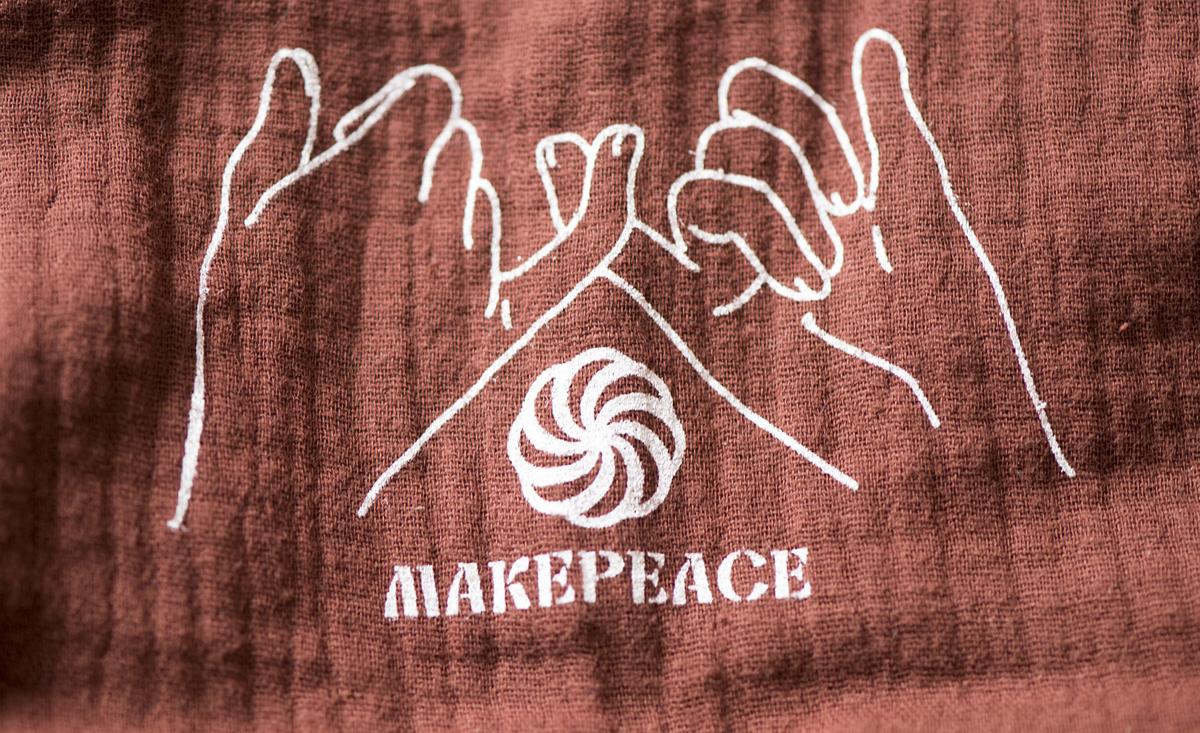 A Make Peace logo is emblazoned on an infant’s onesie. 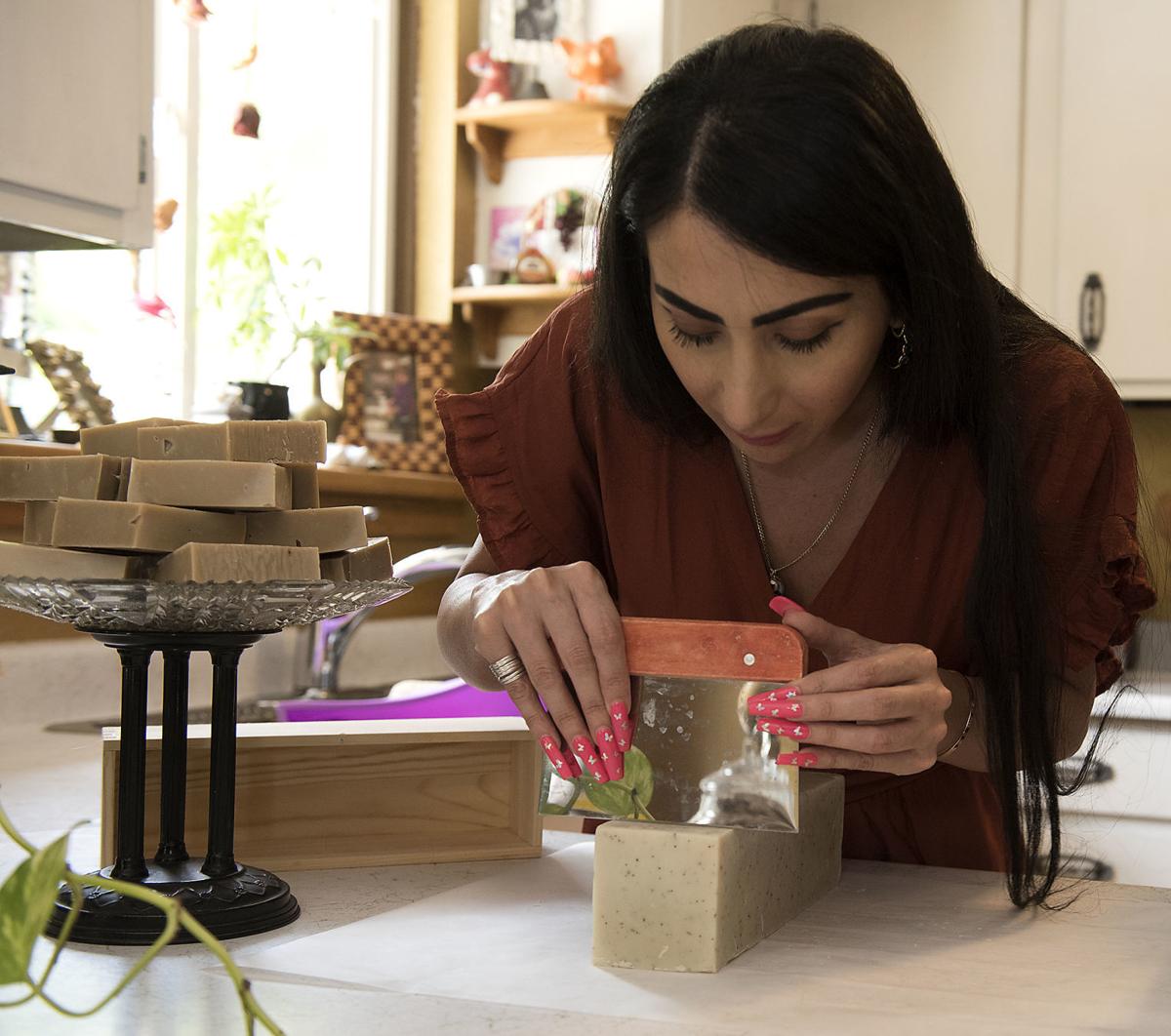 Liyah Babayan cuts bars of soap from a block of soap.

Liyah Babayan and her son, Dominic Babayan, 10, pose with a collection of Make Peace soap bars.

Make Peace soap, made with Idaho potatoes, raises funding to help displaced people around the world.

A Make Peace logo is emblazoned on an infant’s onesie.

Liyah Babayan cuts bars of soap from a block of soap.

Idaho’s famous potatoes have fed the world for generations, but now, through the efforts of a Twin Falls entrepreneur, they are being used to produce skin care products and at the same time helping restore human dignity to displaced people around the world.

It’s a story that began during a conflict half-way around the world in Asia but found a home here in Idaho.

The year was 2016. Beyonce’s album, “Lemonade” was No. 2 on Billboard’s pop charts and Liyah Babayan was looking to begin a new start-up business making beauty products that would complement her boutique consignment shop, Ooh La La in Twin Falls.

She was trying to decide what ingredients to use for the beauty products while listening to Beyonce’s album “Lemonade.” She was considering a variety of ingredients including goat’s milk and honey when suddenly an inspiration came to her.

“I thought, ‘Yeah, you know, life’s never given me lemonade but life has given me potatoes,’” she said.

In the process she also remembered how her grandmother would apply potatoes as a topical relief for headaches, fevers and rashes.

“I did research on this potato remedy and the cross-cultures across time where it exists. The potato has kind of been that dull, boring miracle,” Babayan said.

For Babayan it was a recognition of the life she had made for herself and her family here in Idaho since arriving as a refugee from Azerbaijan in 1992.

“It brought me to Idaho and gave me potatoes; that was the reality but it was a metaphor, too,” she said of the refugee status that brought her family to Idaho.

And with that inspiration came the impetus to begin a cosmetic line made from Idaho potatoes that she would name ‘Make Peace.’ Make Peace skin care products include soap, skin lotion, lip balm, beard balm and a clothing line, but soap is the primary product at this time.

“You just have no control over where you end in the world, in life and what it hands you,” she said. “The main thing is to make peace of it, and for me make peace became the philosophy of Make Peace but also the products being driven by potatoes, making sure to incorporate potatoes into the organic skin care line.”

Make Peace is not only a new enterprise but represents one more challenge in a life of challenges for Liyah Babayan. Make Peace is an attempt to bring her life’s journey full circle with a product dedicated to helping the world’s homeless and vulnerable population — something that resonates with her and her family.

Born in Baku, Azerbaijan, in 1983, her family is of Armenian heritage. The majority of Armenians are Christian and are an ethnic minority in Azerbaijan, a country that is almost 97 percent Islamic.

In 1988, a territorial dispute developed between Azerbaijan and Armenia. The Nagorno-Karabakh region of Azerbaijan, an area populated predominantly by Armenians, sought to secede and unite with Armenia on February 20, 1988.

Tensions between the two countries during this time provoked civil unrest and resulted in a series of ethnic cleansing pogroms of Armenians living in Azerbaijan in Sumgait and Baku.

As a result of the pogroms, Babayan’s parents, she and her brother, Aram, sought safe refuge in neighboring Armenia, abandoning their home and many of their possessions back in Baku. With a long history of merchants and business owners, the family had enjoyed a comfortable, middle-class lifestyle in Azerbaijan, according to Babayan.

During the next four years they would live in exile in Armenia while her father petitioned the United States for asylum as political refugees.

“My dad is a realist. He just understands history and he understands that once sentiments and xenophobia and nationalism, when that nerve is tugged things just don’t settle down on their own. It only gets worse and he knew that it was just a matter of time where it became dangerous for us to live in Azerbaijan,” she said.

In 1992 their petition was granted and they began a new life in Twin Falls.

According to Babayan, her family’s transition to the U.S. was anything but smooth. They spoke very little English and her parents had to immediately find employment to begin repayment to the U.S. for the family’s resettlement expenses. It was a difficult time but they persevered.

Fast-forward 28 years and Babayan has established deep roots within the Twin Falls community. She is a college graduate, U.S. citizen, a successful business owner, a mother home-schooling her son and daughter and she has written an autobiography, “Liminal, a refugee memoir.”

Passion is a word that frequently comes up in discussions with Babayan. It’s a state of being that she emphasizes in everything she undertakes. Whether it is her work, her family or her community if she can’t be passionate about what she is involved in then it’s time to move on and find a new passion in life and work.

When Babayan started Ooh La La in 2007 she had made three promises to herself when she began the enterprise.

The first was that if she should ever lose the passion for her business for two consecutive weeks she would consider that to be her two-week notice.

“If I got to a point that I dreaded going to work for two weeks that was my two-week notice,” she said. “I told myself and people close in my life around me to reaffirm this.”

The second promise was that she would never compromise her family for her business.

“Business can take you over,” she said of this promise. “Your own business can devour you.”

The third promise was that if Ooh La La proved to be successful she would begin another business in 10 years.

“If I’m still in business I have to just completely pivot and start something brand new — challenge myself in an industry I’m not familiar with so I can keep growing because it will then trickle into the business I already have,” she said.

While seeking a new challenge after 10 years in business was the original motivation for Babayan, there was an even more important reason behind this start-up for her.

“For me the driving factor was human rights when it came to this Make Peace company and brand — physical dignity and hygiene as a basic human right,” she said. “For me the conversation around all these things gets so loud and so scattered and so politicized but let’s just start with the basic. What can we agree on? We are all the same. Human beings all deserve dignity. All dignity begins physically. Physical dignity begins with hygiene.”

The Make Peace brand is more than just a product. It is a philosophy rooted in Babayan’s personal refugee experiences growing up.

“Children of war have a special place in my heart because I was one of them,” she said. “I know their reality so Make Peace became a little bit bigger than just a soap for me. As a belief that peace is born in the thoughts, words and actions of everyday life. Make Peace is the practice of peace making within our own heart, our own mind, our own life, our own relationships.”

In the time since she started Make Peace it has remained a small enterprise, but that hasn’t stopped Babayan from trying to make a difference in people’s lives.

“Soap is a life necessity, but for millions of displaced people around the world this is unattainable. So the commitment was for every product sold, Make Peace would donate a bar of soap to a child or adult in refugee camps, as well as displaced people right here in the U.S.,” Babayan said. “For me that’s the homeless, that’s the children that are going through the foster care system and many of our veterans, who may have shelter but they are displaced.”

Knowing that some people might not want to change their current beauty products for the Make Peace products, Babayan has extended the merchandising to include a clothing line of t-shirts and infant’s onesies. With each purchase a bar of soap is donated to an organization dedicated to helping refugees and displaced people.

For Babayan the core foundation for Make Peace is to help bring human dignity to displaced people.

“There is no more intimate way to care for another human being than to care for their cleanliness,” she said. “I’d liked to see the soap be able to generate scholarships and support other projects.”

For more information about Make Peace go to Facebook.com/makepeacelife.