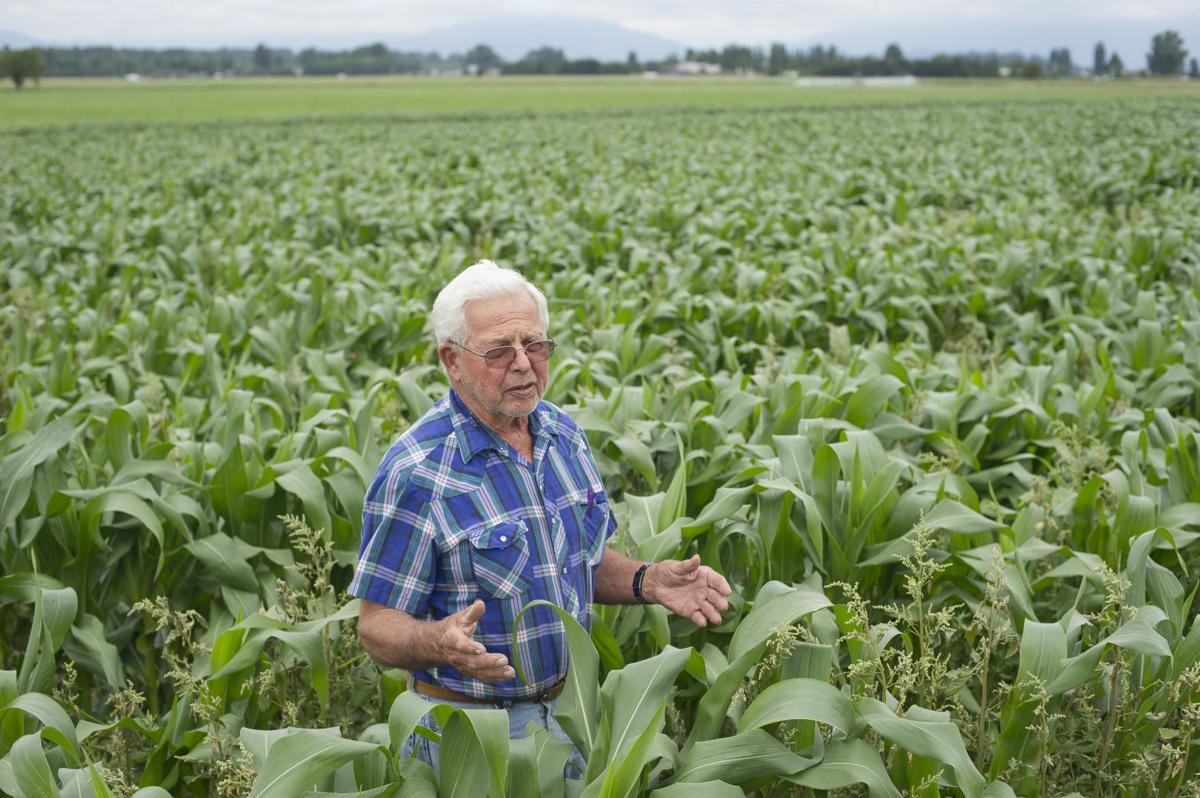 Steve Schuh, a farmer in Skagit County for over 50 years, discusses the effect of the heat wave on crops on Thursday west of Mount Vernon. Schuh says corn, which is already waist-high, will be ready to harvest about a month early because of unusually warm weather. 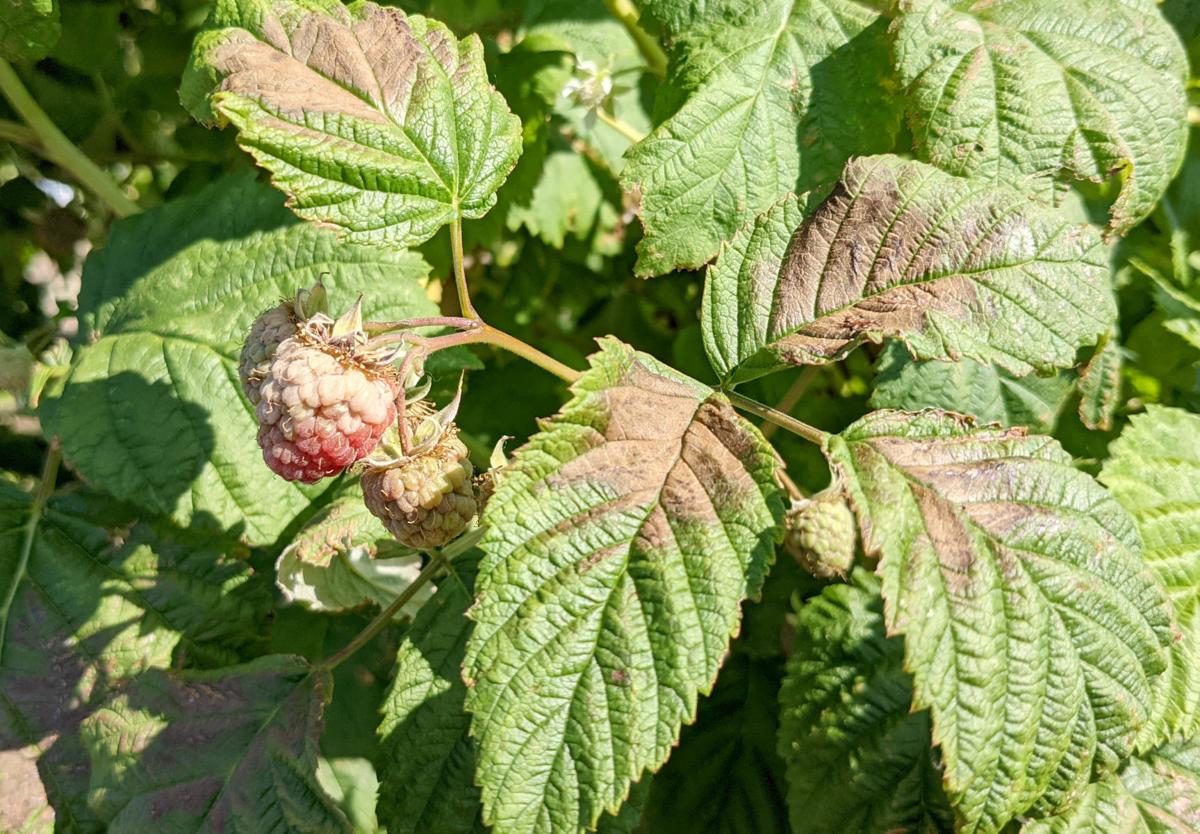 Raspberries grown in Skagit County were damaged by the recent heat wave. The damage includes the brown, dry leaves and white sunburned patches. 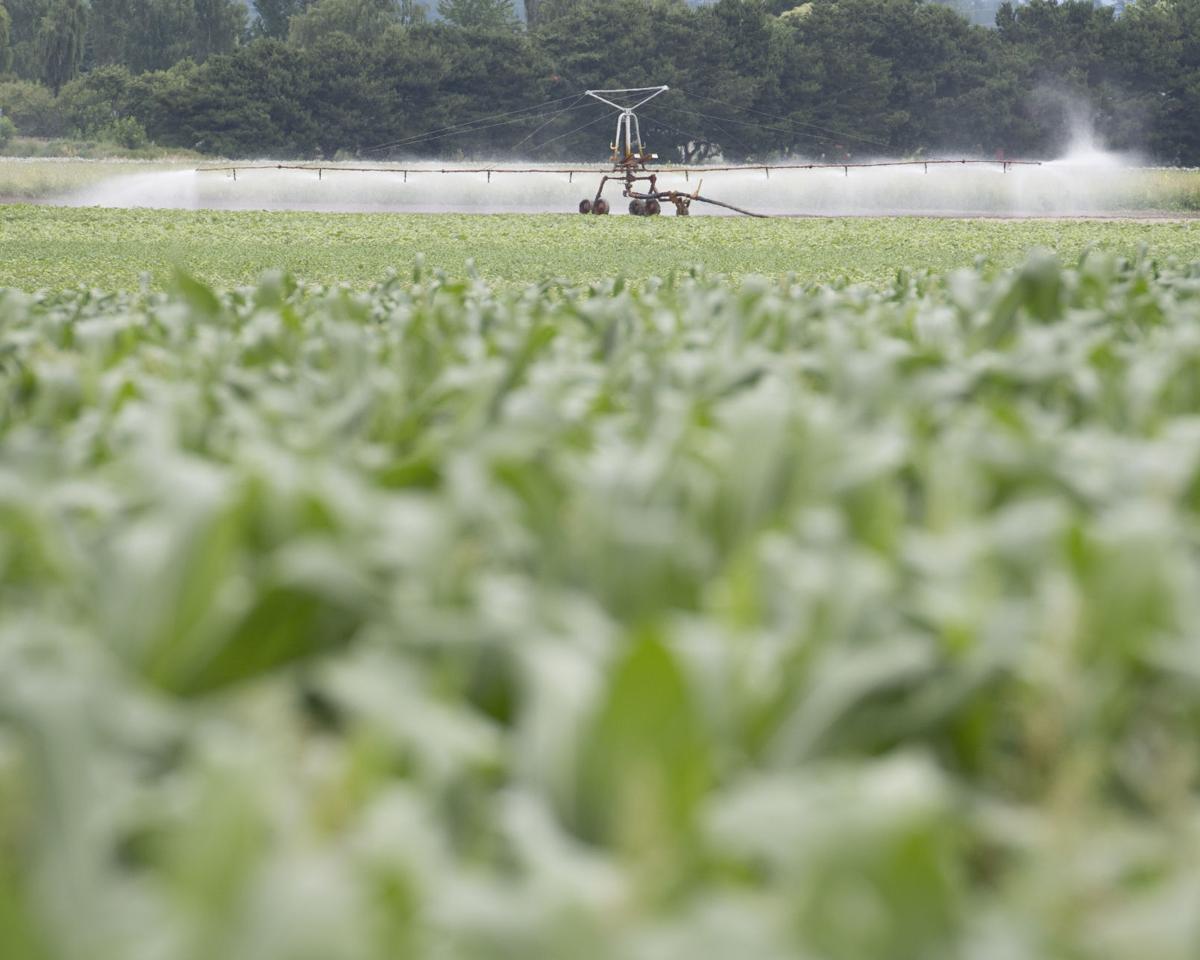 A boom irrigation system waters a field west of Mount Vernon Thursday. Farmers are increasingly relying on irrigation amid hot and dry weather. 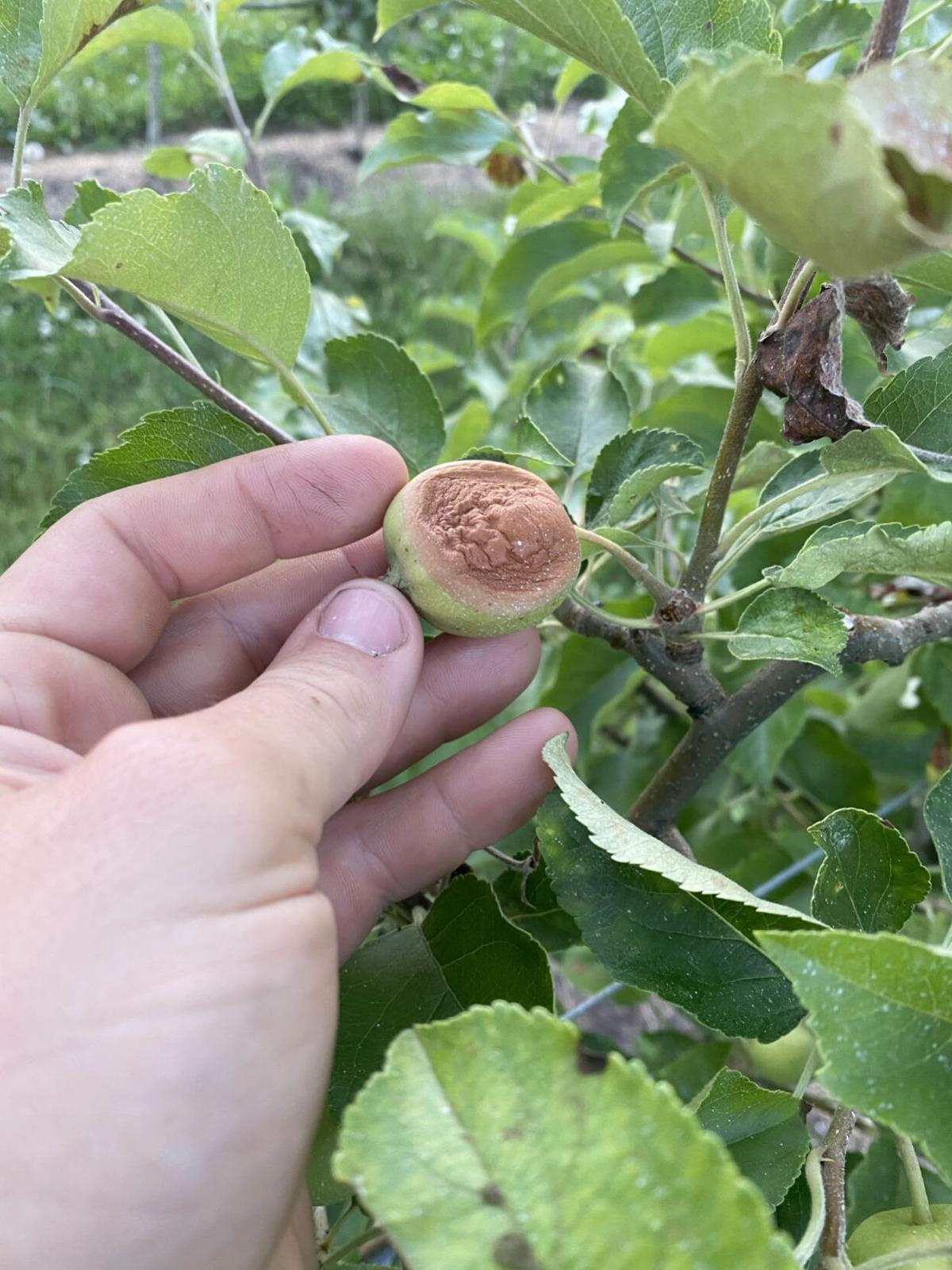 A honeycrisp apple at Sauk Farm that was damaged by the recent heat wave. Operations manager Griffin Berger estimates the farm lost between 10% and 30% of its apple crop, depending on the age and variety of apple trees.

Steve Schuh, a farmer in Skagit County for over 50 years, discusses the effect of the heat wave on crops on Thursday west of Mount Vernon. Schuh says corn, which is already waist-high, will be ready to harvest about a month early because of unusually warm weather.

A boom irrigation system waters a field west of Mount Vernon Thursday. Farmers are increasingly relying on irrigation amid hot and dry weather.

MOUNT VERNON, Washington — One week after record-breaking heat battered Skagit County and much of western Washington, area farmers are assessing the damage to their crops while continuing to cope with an unusually warm and dry growing season.

While the full impact of the heat wave is not yet known, farms say extreme heat stresses young plants and can result in smaller yields. Unusually warm weather so early in the season may speed up the harvest of some crops.

Farms use the old saying “knee-high by Fourth of July” to measure the progress of their corn crops. The corn at Schuh Farms has blown past that.

“We’ve never ever had corn like this,” said Schuh Farms co-owner Susan Schuh. “This is eastern Washington weather with growing corn.”

Recently in a field west of Mount Vernon, the corn was already waist-high. Steve Schuh said he expects to have corn by Aug. 1 — a full 20 days earlier than normal.

Susan Schuh said the farm relies on irrigation, including a new sprinkler system for overhead watering, to keep crops alive.

He said he expects to have just two grass cuttings, instead of three, this season, leaving the ranch with less hay for cows over the winter.

“The stored forage of winter feed will be very low,” Sapp said.

Sauk Farm near Rockport lost between 10% and 30% of its apple crop, depending on the age and variety of apple trees, said operations manager Griffin Berger.

He said the farm recorded surface temperatures on fruit of between 145 and 155 degrees on Monday.

“That absolutely cooked every apple that was in direct sunlight,” he said.

A majority of damaged fruits have collapsed in on themselves and cannot even be turned into juice or cider, Berger said.

“(It’s) like somebody held a blowtorch to them and melted them,” he said.

The farm’s younger apple trees, with less vegetation for shading, suffered the most. The farm gave extra water to trees and applied a clay-based protective spray, but it wasn’t enough, he said.

The farm is looking at purchasing evaporative cooling systems and shade netting to protect crops from hot weather in the future. The upgrades will be expensive, Berger said.

“We’re going to have to figure out where we can find the capital to make that happen,” he said.

The farm’s other fruit, including grapes and peaches, fared better during the heat. Having a diversified farm helps balance out losing some of the apple crop, Berger said.

”The heat did cause the strawberries to ripen earlier, which impacted our harvest schedule and made it difficult to harvest it on time,” he said in an email.

The farm’s biggest concern was protecting workers during the heat wave, Weeden said.

The farm started harvest at 5 a.m. and ended earlier in the day to keep crews out of the worst of the heat. The farm also provided shade tents and trailers in fields, plenty of water and ice, and electrolyte drinks, he said.

Still, the farm estimates it will lose between 10% and 20% of its strawberry crop, Weeden said. Blueberries and blackberries, still weeks away from harvest, were less affected.

”Fortunately, for our farms that are closer to the ocean cooling buffer, we were 10–15 degrees cooler than a lot of the other regions in the Pacific Northwest,” Weeden said.

”Irrigation can help, but this event was so extreme that irrigation could not keep up and at a certain point, the plant loses its ability to cool even with ample irrigation,” she said in an email.

When a plant cannot cool itself, it starts to dry out, and leaves turn dry and crispy, she said. Fruits also get sunburnt.

Equipment such as overhead sprinklers for evaporative cooling and shade cloths help, but are not common among Pacific Northwest growers, Wasko DeVetter said.

After last weekend’s extreme heat, raspberries and blackberries are showing more damage than blueberries, she said.

Not a total loss, damaged fruits can be turned into jams, juices and purees. But they cannot be sold fresh at a higher value or as a frozen product, Wasko DeVetter said.

In most cases, plants will recover the following year.

“However, damage was so severe in other regions of the Pacific Northwest that the crop may be affected for multiple years,” she said.

Berries in Whatcom County fared worse than berries in Skagit County, she said.

When young plants are stressed, they may be less productive, reducing yields.

”Harvest might come quite a bit earlier with lower yields,” he said.

McMoran said while irrigating crops does help reduce heat stress, farmers in Skagit County are not set up to apply a lot of water in a short time.

”I think the biggest thing we might see is (the heat) might pale up the red potatoes a bit, but we’ll wait and see if it was a long enough event,” he said.

A three-day hot weather event is manageable, but there are concerns about a long, hot summer.

”If we get a hot stretch for a long, long period we don’t have extra moisture in the ground because we’ve been dry for so long now,” Hughes said. “Stuff will start shutting down quicker than normal.”

The heat wave came while farmers were already facing drought conditions, according to the U.S. Drought Monitor.

Much of the Pacific Northwest has below-normal soil moisture levels, according to a recent webinar on drought and climate outlook hosted by the U.S. Department of Agriculture’s Northwest Climate Hub.

”If the spinach plant is stressed from lack of moisture, then ultimately it won’t live as long and make as much seed,” he said.

He said it’s unclear how the recent heat wave affected his crops, and impacts will vary from field to field.

”I think a lot of fields fared fairly well if they had adequate soil moisture and the person had access to irrigation water,” he said.

Despite drought conditions, farmers appear to have an adequate supply of irrigation water this summer.

”The forecast runoff for the Cascades is really healthy,” state Drought Coordinator Jeff Marti said. “The Skagit River near Mount Vernon is at 102% of normal.”

Getting the water to the crops is another challenge. Farmers never have enough irrigation equipment to cover all their fields, Johnson said.

”Ultimately you get to the point where you’re going to pick and choose which fields to irrigate,” he said.