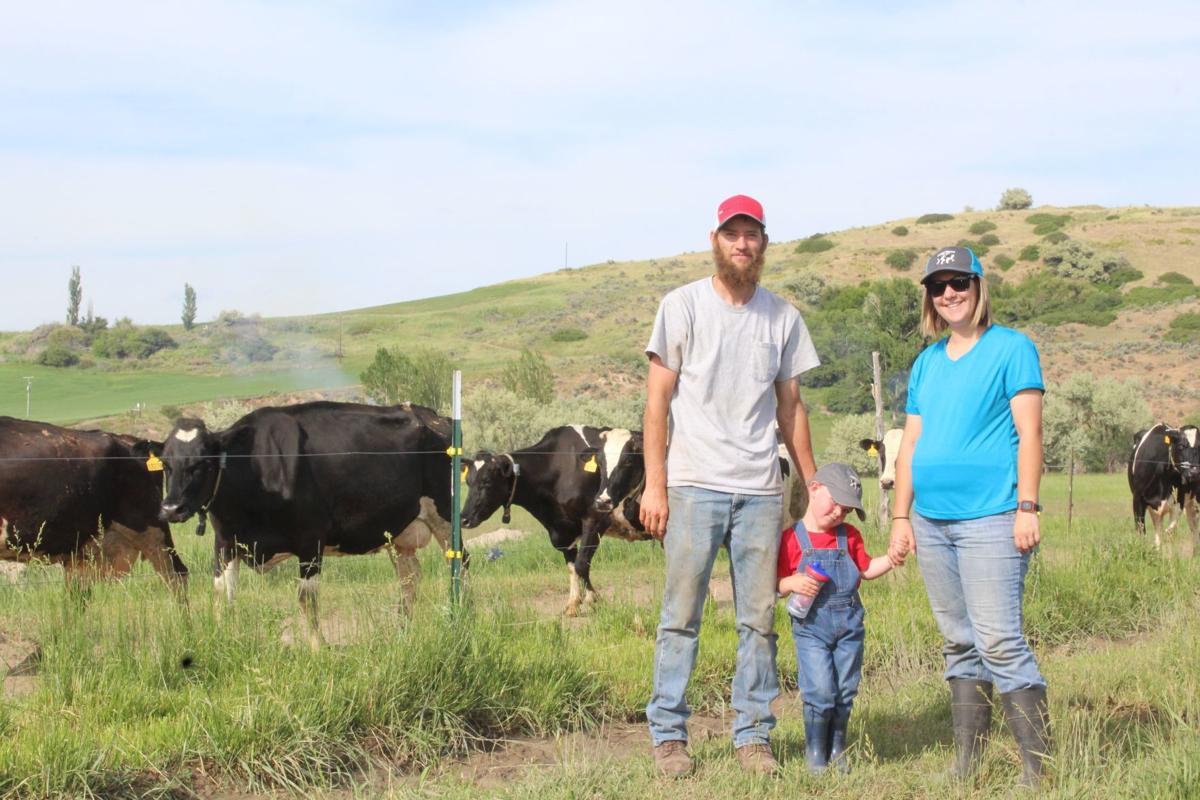 Jordan and Mandy Darrington and their son Gordon show off the dairy cows on their organic dairy in Preston. 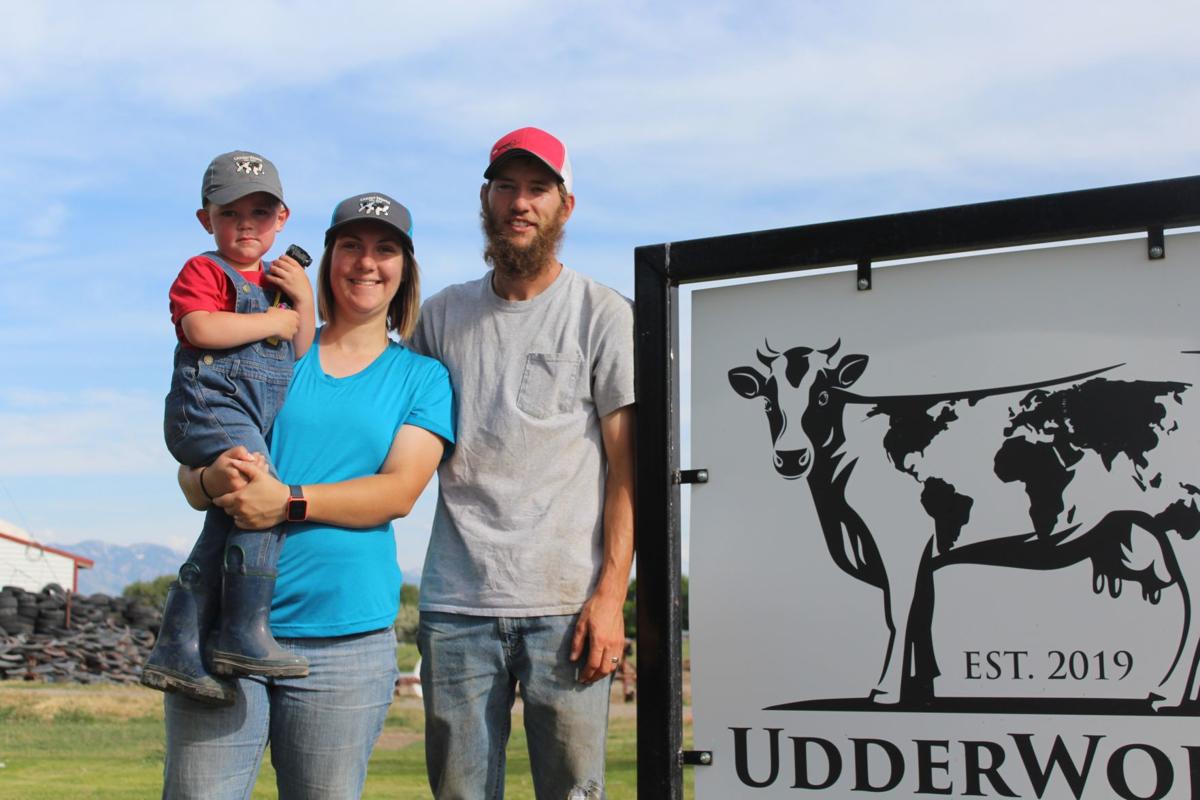 Mandy and Jordan Darrington and their son Gordon moved to Preston from Burley about a year ago to start Udderworld Dairy.

Jordan and Mandy Darrington and their son Gordon show off the dairy cows on their organic dairy in Preston.

Mandy and Jordan Darrington and their son Gordon moved to Preston from Burley about a year ago to start Udderworld Dairy.

PRESTON — At a time when dairies are sharpening their pencils to stay in business and others are simply selling their herds, Jordan and Mandy Darrington have started up Udderworld Dairy on Hot Springs Road.

The young couple, who moved from Burley a year ago, say that although they work harder than they ever did for others, running their own dairy has been far more rewarding.

Not only has the work been satisfying, but the relationships they have developed have been important to the Darringtons.

When they first brought their cows from Oregon to the dairy, neighbors rallied around them and helped the couple as they milked cows from the time they arrived that night until about 5 a.m. the next morning. That really impressed Mandy.

Since that time, they have found one employee to help them with the daily milking of about 185 of their 220-cow herd. They use a rotary milking system which was installed by the prior owner of the diary. Jordan said he has worked with a robot system and has found he prefers the rotary dairy because of its reliability.

He and Mandy also implemented a new electrical fencing system that allows him to move the herd to different sections of pasture on a daily basis. The charged wire stretches between metal legs arranged in a circle to create a wheel, which rolls the entire fence along when pulled to a new location.

The couple likes the rolling electrical fence because it offers more flexibility in managing the pastures. For example, it is easier to accommodate the different growth rate of grass during the year. In the spring, grass grows higher than in drier times of the year.

Jordan enjoys that fact that their cows graze on fresh pasture. That’s one of the reasons the couple opted to operate an organic dairy.

Another reason is the stable price he receives for his milk, he said. All totaled, there’s a lot of extra work to run an organic dairy, and some costs have been traded for others compared to a conventional dairy, but the returns have been worth it, he said. They like the lifestyle.

Some of that extra work is simply being extra vigilant with cleanliness and nutrition. They focus on preventive care.

“A lot of the fast working treatments aren’t organically approved, so prevention is the key, and that goes with organic crops and organic livestock. We do a whole vaccination protocol,” he said. A vet is on site every month checking on things.

They also have a professional nutritionist adjusting the herd’s diet, which includes a probiotic. “When the gut is happy and the cows is calm,” herd health is improved.

“We try to stay as consistent as possible,” Jordan said.

Regarding crops, “we are trying to be more regenerative about our approach. All manure is made into compost, which we put on the fields. We are also putting biologicals on hay fields — which are bugs that are often killed by sprays used in conventional operations,” he said. In addition, their plan for improving the soil and ultimately their crops, includes diversifying crops and rotational grazing.

“We are hoping to build the ground up so it is more self-sustaining,” he said.

Taking the steps to start up their own dairy were big ones ... bigger than they anticipated, said the Darringtons.

“I’d be happy to be milking 120-150 cows, he said, but the size of the Darrington’s farm was largely dictated by current bank loan expectations, said Jordan, as well as production levels required to bring a truck their way to haul their milk to Salt Lake City.

The dairy sells to Horizon Organic, a national company with a plant in Salt Lake City whose sales are 90-95 percent retail. “So Covid-19 has not affected them to the extent is has other operations,” said Jordan.

Udderworld Dairy produces about 10,000 pounds, or 2,500 gallons, a day, he says. His milk is picked up every other day and is one of three dairies providing milk on the route. One is in Newton, Utah, and the other is Jordon’s old boss in Elba.

Jordan and Mandy were students in college when they met. She was studying sociology and he was thinking he’d go into farming. But an opportunity to work with robots on an organic dairy captured his fancy and that changed everything

Today, a typical day starts with turning cows out to pasture in the mornings, changing water, checking on things and then cleaning corrals and pens. Spring time is prime for cutting out weeds and mowing borders to keep his cows from reaching for anything outside of their pastures. Lately “a lot” of paper work has had to e done because the dairy just went through one its organic inspections and the dairy has an animal welfare audit coming up.

That’s something he does a lot more of than his father, who runs a conventional dairy in Declo. But they both have feed to grow, buy and put up. They both maintain equipment.

Running a new dairy is a lot to keep track of, but Mandy helps out, and said she’s confident in her husband.

“This is a lot, but it’s been good. It is fun to see Jordan in his element,” she said.

Although milking has never been her thing, the big steps the couple has taken have never unnerved her.

“When Jordan does anything, he’s gong to do well. So it hasn’t been a huge burden or heartache. He knows what he’s doing. He does a lot of research on practically anything, equipment, cows, any of the latest stuff. When he puts his mind to it, he does well,” she said.

That’s “not to say there aren’t hard days,” she said. “It has been an eye opener. I’ve done a lot I never expected.”

The lifestyle they are living suits them, they say. The couple finds satisfaction in building their own dreams and a future for their growing family.