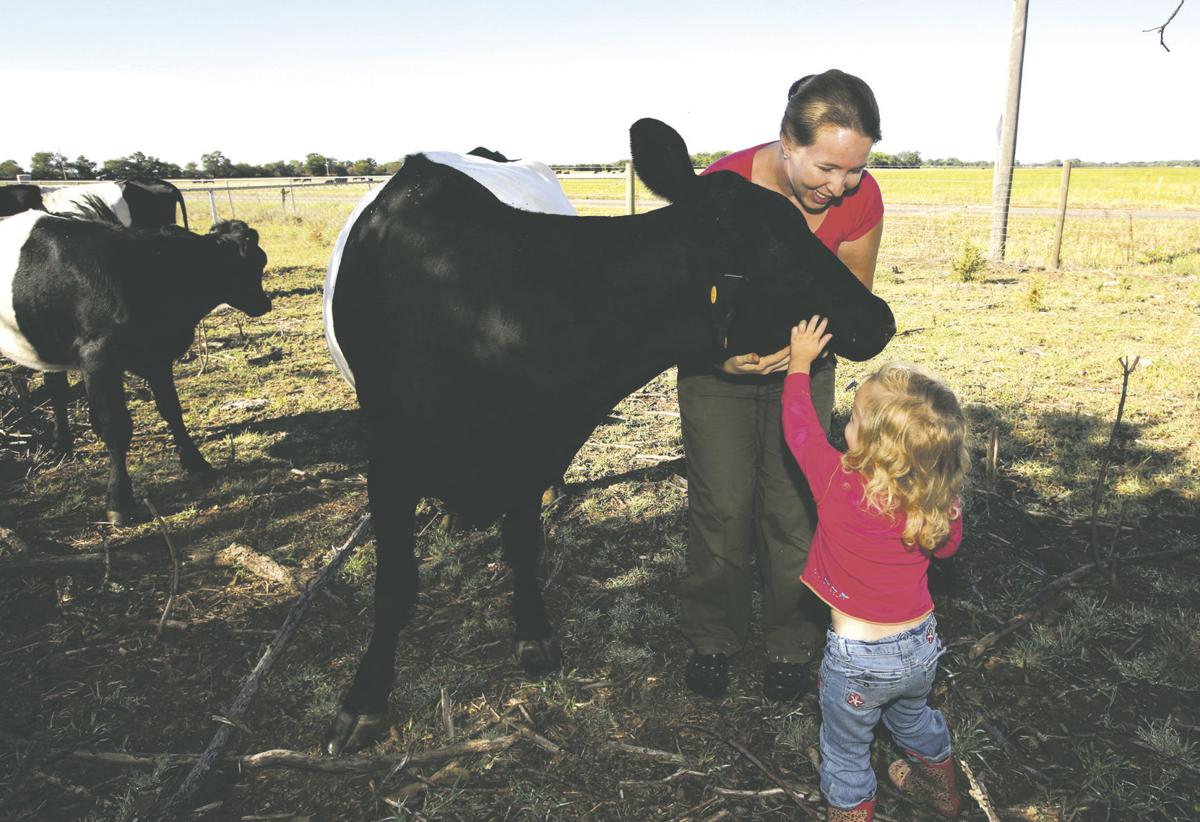 Aaliya Nininger, 3, pets Elise, a Dutch Belted cow, with her mother Rebecca Nininger at their pasture in rural Reno County, near Nickerson, Kan. 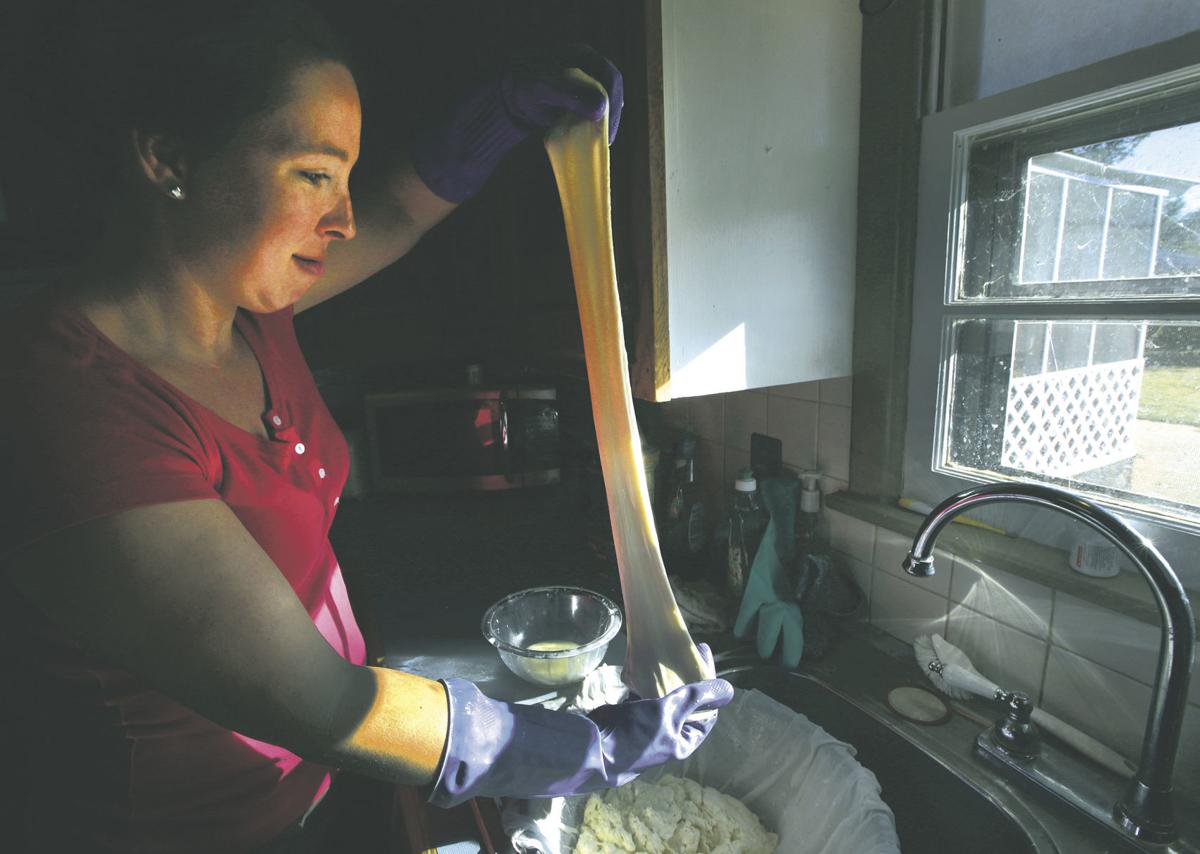 ebecca Nininger checks on her Brie cheese in her cheese cellar, formerly a storm shelter, which has the air conditioning running to make it 55 degrees, near Nickerson, Kan. 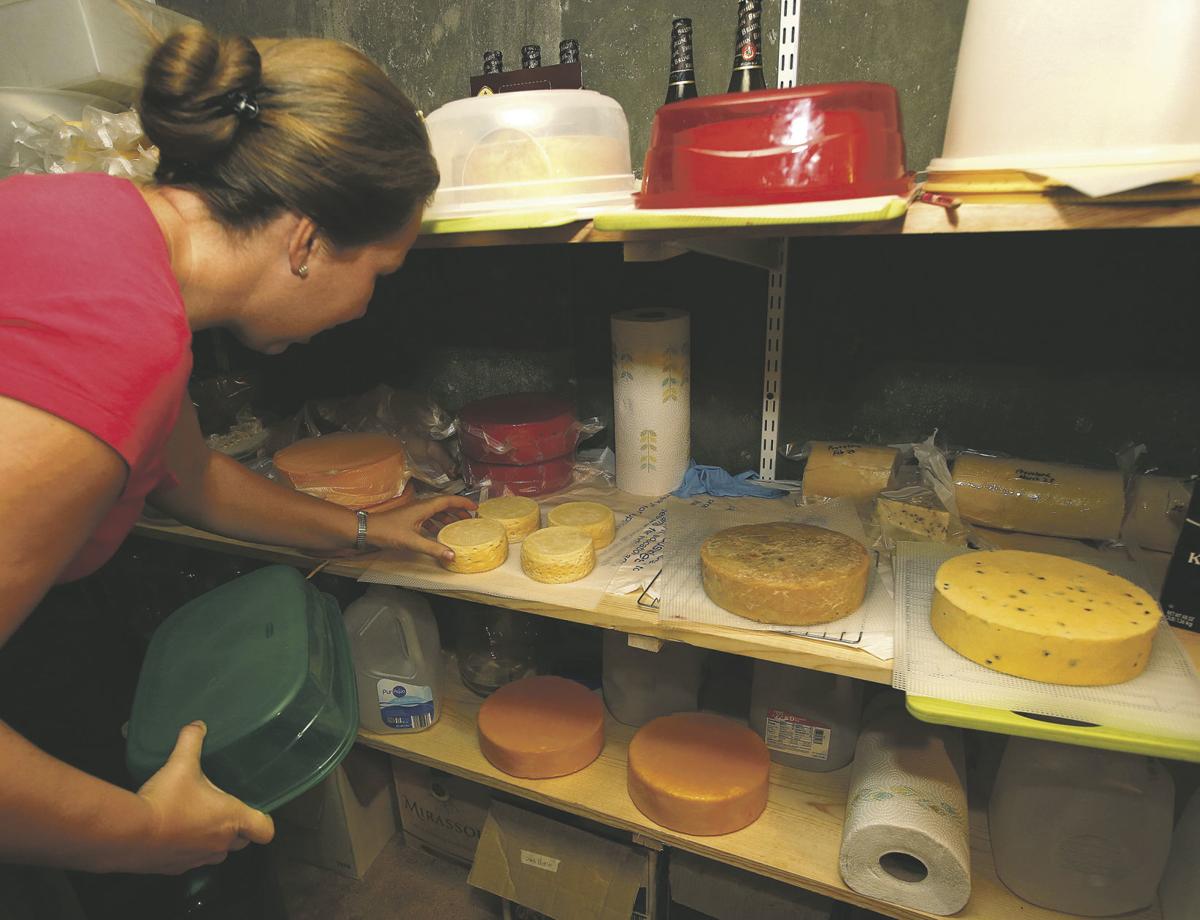 Rebecca Nininger stretches out mozzarella cheese that she made at her home, near Nickerson, Kan. 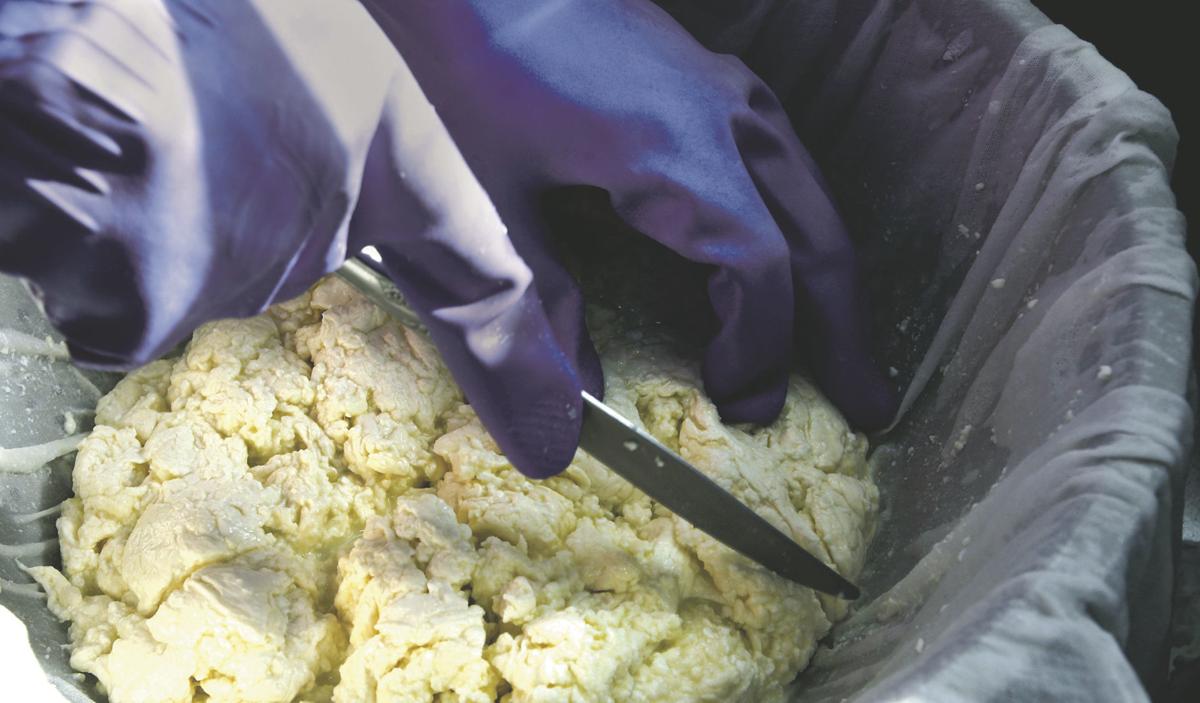 Rebecca Nininger cuts freshly made mozzarella cheese so she can heat it and shape it, near Nickerson, Kan.

Aaliya Nininger, 3, pets Elise, a Dutch Belted cow, with her mother Rebecca Nininger at their pasture in rural Reno County, near Nickerson, Kan.

ebecca Nininger checks on her Brie cheese in her cheese cellar, formerly a storm shelter, which has the air conditioning running to make it 55 degrees, near Nickerson, Kan.

Rebecca Nininger stretches out mozzarella cheese that she made at her home, near Nickerson, Kan.

Rebecca Nininger cuts freshly made mozzarella cheese so she can heat it and shape it, near Nickerson, Kan.

HUTCHINSON, Kan. — Rebecca Nininger has found her “whey,” though, she never dreamed the way would be cheese making.

However, the young mother of three is passionate about creating such cheeses as Brie, Gruyere and even mozzarella in her kitchen. Her passion overflows in a cheese cellar stocked with shelves of her artistic creations aging in the climate-controlled space.

Looking back, she can see how this all evolved.

“I’m an artist,” she said, pointing to a painting of her grandfather hanging on the living room wall.

Her self-expression evolved into cooking. That exploration led her to making her own mulberry and elderberry wine. She was particularly drawn to the pretty bottles and colors, she said.

“A natural extension of that seemed to be learning to make cheese,” Nininger told The Hutchinson News .

Now she soaks some of her cheeses in that mulberry and elderberry wine.

“It gives the cheese a nice, dark color,” she said. Others she washes in ale or salt brine and leaves them to age with the temperature set at 55 degrees in the room that was originally built as a storm shelter.

“If we do have a tornado, we will be happy down here,” she said.

On a recent morning, she was stirring a 5-gallon pot on her stove. A glance inside the stainless steel pot revealed a milky, white, pudding-like substance. However, that was just one step in making several pounds of mozzarella cheese. It takes a gallon of milk to make a pound of cheese. It takes a little less with mozzarella.

As Nininger stirred, she explained that mozzarella was one of the quickest cheeses to make.

Before diving into cheese making she did her homework. She sought out Loyd Borntrager, a dairy farmer near Yoder.

“She found out that I make cheese and stopped and asked if she could spend the day with me,” said Borntrager.

They talked a lot about cheese that day, sharing lunch and several books about the process. Borntrager, who began making cheese curds back in 2006, had advanced to hard cheeses. He introduced her to the Dutch Belted cows he prefers for milking and cheesemaking.

“She bought a purebred cow from Illinois and fell in love with them,” Borntrager said.

Now the student has progressed so well that Nininger has become the teacher to others, offering simple cheese-making classes in her home. The one-day classes last for 3 ½ hours and include a tour to meet cows Elise, Elena and Emmaline.

Borntrager said that people are intrigued with the process and just want to watch while others who are getting back to basics want to make a simple cheese from their cow’s milk. He sells milk, cheese and yogurt from the milk of his grass-fed cows.

Nininger sampled the milk from Borntrager’s cows, did some research and decided she wanted to use the milk from the Dutch Belted breed.

Now Borntrager is happy to have someone in the area to talk shop with and for breeding stock.

“I’m very picky about the milk I drink; it’s the only milk I like. It makes really good cheese,” Nininger said. She found the milk from Jersey cows too fatty.

Meanwhile, big clumps appeared in the liquid she was stirring. Within minutes she was straining them off. On another day, the curds would be what she wanted for the variety of cheese curds she makes.

Continuing on with the mozzarella process, she cut what remained after straining into fourths and placed a mound into the nearby microwave for 45 seconds. Once it was done, she was stretching out what seemed like a warm piece of slime, then kneaded it into a mound. When she was done, Nininger had created several pounds of mozzarella cheese. It would need to dry for a day before it was completely ready.

According to Janelle Dobbins, marketing manager with the Kansas Department of Agriculture’s From the Land of Kansas program, there are only four cheesemakers in the state listed with their program. They include Alma Creamery, in Wabaunsee County, and Good Karma Micro Dairy, LLC, in Russell.

Nininger grew up in Ontario, Canada. She met her husband, Jesse, on a Navajo reservation. He was living there with his parents who were missionaries. She had come on a mission trip.

Jesse was originally from Hutchinson, and after marrying, they moved back to Reno County.

Two years ago they moved to a home on Yaggy Road. Along with their cows, the family has more than 20 chickens, two pigs and five goats. Jesse milks the cows once in the morning before heading off to Kuhn Krause where he is an engineer. He also milks them every evening.

For Nininger, cheese making is another way to express her creativity.

“She is really an artist with cheese,” Borntrager said.

Her finished products are works of art. She even enjoys waxing the cheese to add more color.

“I like creating and having people come to the house,” she said.