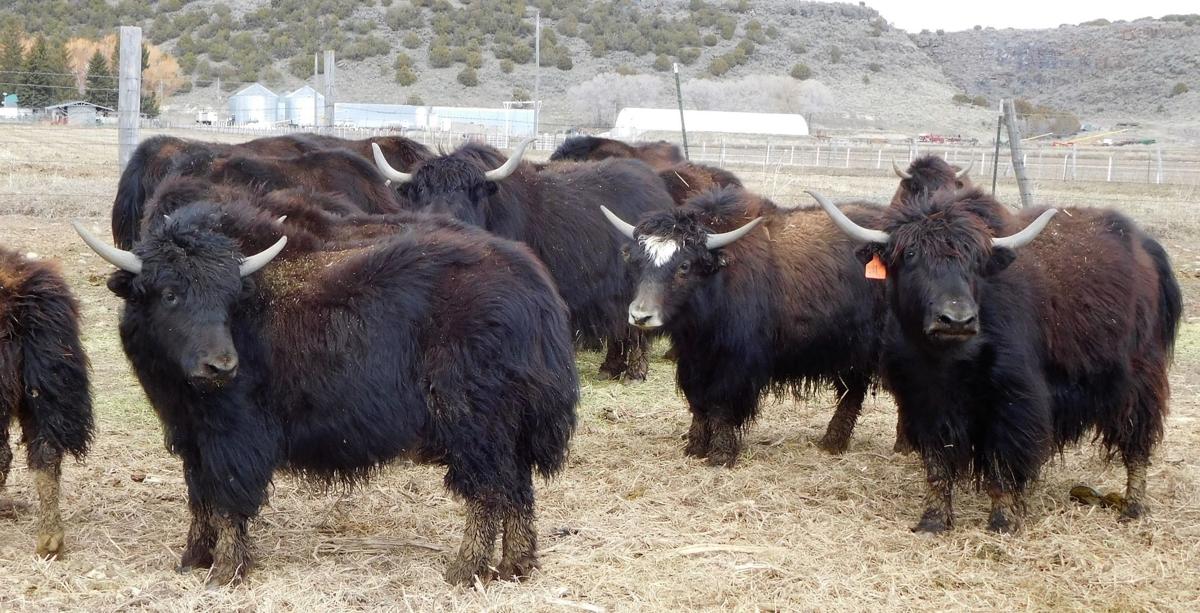 These young yaks will spend the summer in steep, rocky canyon ground near the Sutton’s farm land. 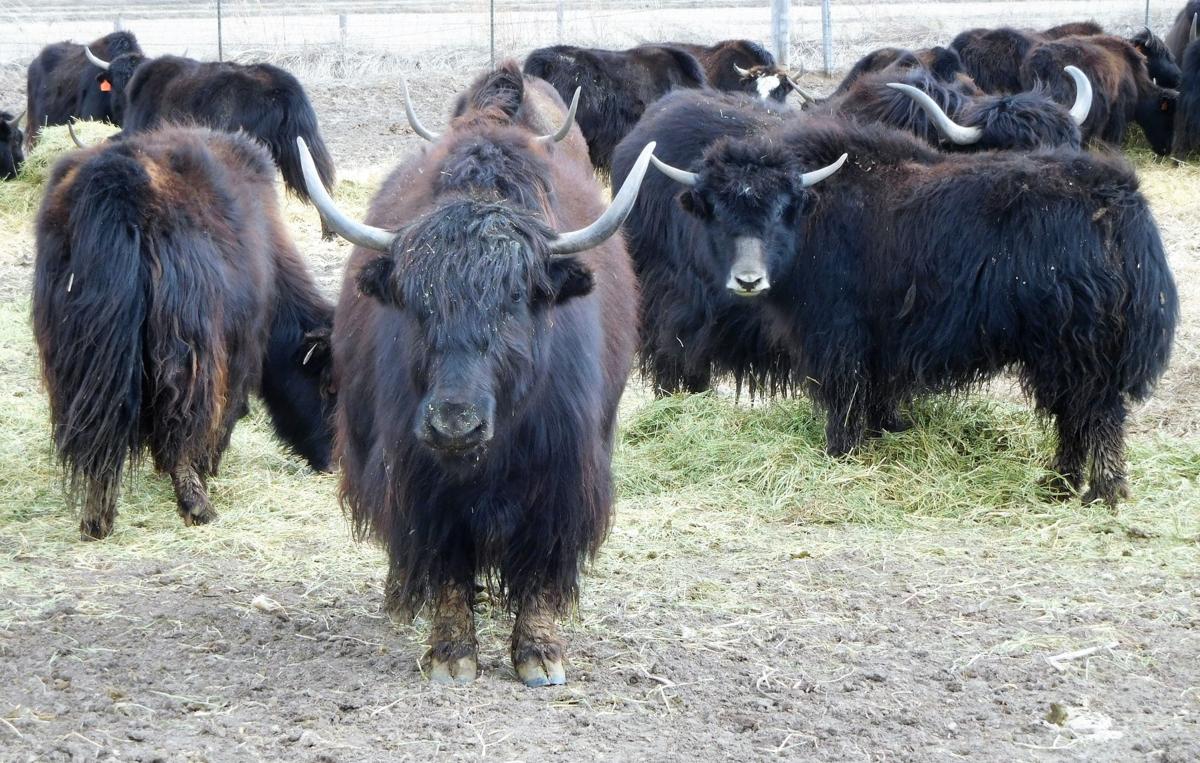 These mature cows show the heavy hair coat, hump and horns typical of their species. Kent and Susan Sutton have about 70 head of yaks they raise for breeding stock and for their ultra-lean and nutritious meat. The yaks shed every year and the dense clumps of wooly fiber are sought by area hand –spinners and artisans. 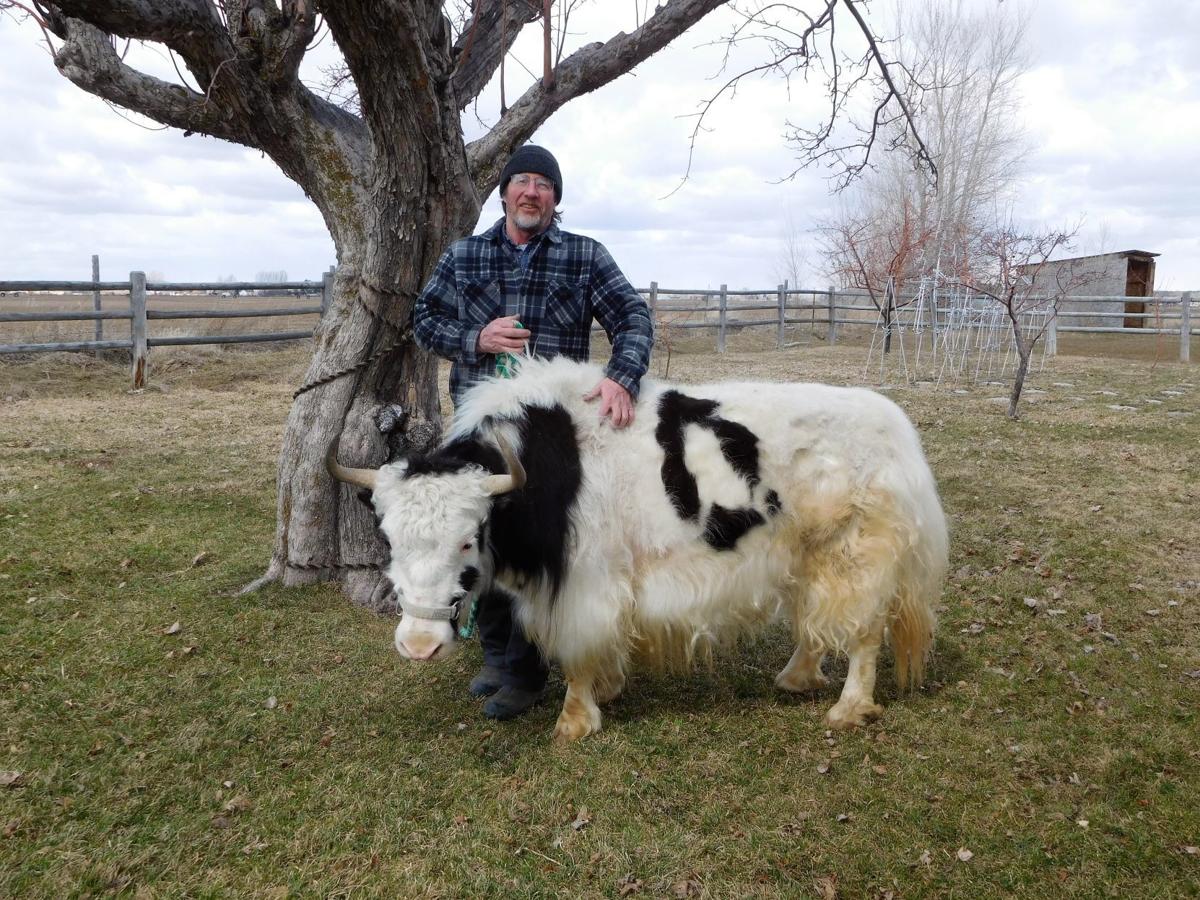 Rexburg farmer Kent Sutton diversified into yaks about ten years ago. Here he is shown with the small pet yak “Sunshine” that he and Susan Sutton raised as a bottle baby and use for educational purposes.

These young yaks will spend the summer in steep, rocky canyon ground near the Sutton’s farm land.

These mature cows show the heavy hair coat, hump and horns typical of their species. Kent and Susan Sutton have about 70 head of yaks they raise for breeding stock and for their ultra-lean and nutritious meat. The yaks shed every year and the dense clumps of wooly fiber are sought by area hand –spinners and artisans.

Rexburg farmer Kent Sutton diversified into yaks about ten years ago. Here he is shown with the small pet yak “Sunshine” that he and Susan Sutton raised as a bottle baby and use for educational purposes.

The curious and friendly 3-year-old animal makes guest appearances at the Madison County Fair, where she introduces new audiences to an ancient member of the bovine family — the yak.

“She gets a lot of attention,” says Kent Sutton, who operates Sutton Yaks with his wife, Susan. “Sunshine was a bottle baby so she’s quite well socialized. She’s smaller than others her age — mostly a pet.”

The Suttons bought their first yaks about 10 years ago and now have a herd of about 70 head. Sunshine is their only individual broke to lead or pack.

“I guess we’re a little eccentric,” Kent explains. “We bought five initially and discovered they are really interesting animals, with definite personalities. I guess what we do is between a business and a hobby. It’s not real lucrative, but I sell enough to break even.”

Yaks are the high-altitude Himalayan cousins of cattle, distinguished by shoulder humps, sharp and narrow horns and long, shaggy skirts. For thousands of years, yaks have thrived in frigid thin air, rugged terrain and harsh conditions at elevations of 16,000 feet and above in Tibet, Mongolia and the Tibetan Plateau of northern Asia. A diminishing number of wild yaks continue to roam the area. The area’s early nomadic herdsmen domesticated yaks in the late Stone Age, about 10,000 years ago, and these multi-purpose animals continue to supply the indigenous people with most of their daily needs including meat, milk, butter, cheese, wool, fiber, leather, fuel and packing and draft requirements.

Compared with cattle, Kent says the yaks eat less but have a smaller and more compact body. Cow yaks typically weigh 600 pounds to 900 pounds, with bulls often double in size. They are not as difficult to handle or contain as bison but do not like a lot of human interaction and favor predictable husbandry routines.

They are surprisingly fast and athletic. When agitated, they point their tails straight up and are capable of speeds of 40 mph for a short distance.

“Even these domestic ones are not very far away from being wild,” Kent says. “They are very intelligent and independent. We handle them as little as possible, but when we have a bottle baby it’s easy to see how they domesticate and learn to like people.”

Mostly black or dark brown, a herd will often reject calves with a lot of white, like Sunshine, her hair coat pattern expressing a recessive gene. Yaks will crossbreed with bison and cattle, but the offspring are sterile.

The Suttons keep mothers and new babies in pastures close to home and summer the 2- and 3-year-olds in rocky canyons near their farm ground. Kent admits that loading them in the trailer the first few times can be exciting and always turns the youngsters out with a tame and experienced herd leader.

“They like the steep terrain up there,” says Kent. “When feed gets short we take hay and supplement to them, but we want them to have that freedom and lots of space. They trim their own feet on the rocks. They browse all over and can climb anything.”

The yaks tolerate the warm summers at Rexburg, but it is the margin of their adaptation. They seek out the trees and shady outcroppings and need a lot of water to drink and to stand in.

As well as breeding stock sales, the Suttons have tapped into the growing demand for yak meat. Unlike cattle, yaks do not deposit fat within the meat fibers as marbling. Instead, their fat is deposited beneath the skin. As a result, yak meat is as lean as bison or venison (about 5 percent fat), with a juicy, flavorful but non-gamey taste, and is packed with micronutrients.

“Yak meat is low fat, low cholesterol and very nutritious,” says Kent. “We have repeat customers who like it for the health benefits and because it’s a local, sustainable protein source. We also sell steers to a Colorado distributor who markets all over the country to individuals and restaurants.”

Yak burgers were on the menu at the café a couple miles from Sutton’s operation until the business sold to out-of-state interests.

Yaks shed every year, their wooly undercoat appealing to artisans who clean, card and spin the wool for knitting or weaving. The long tail hair (similar to a horse’s tail) is used for weaving, rope-making, braiding and other applications.

Yak milk is a rich and flavorful beverage, also made into cheese and butter in Tibet, but Sutton has not attempted to milk any of his cows.

As interest in yaks has grown, a U.S.-based yak association and yak shows and promotional exhibits have appeared at events including the National Western Stock Show.

“That’s not really our deal,” Kent says. “It’s a ton of work when we take Sunshine over to the fair for people to see a yak for the first time. We sell a few that way, but mostly we like them out in their herd, just being yaks.”