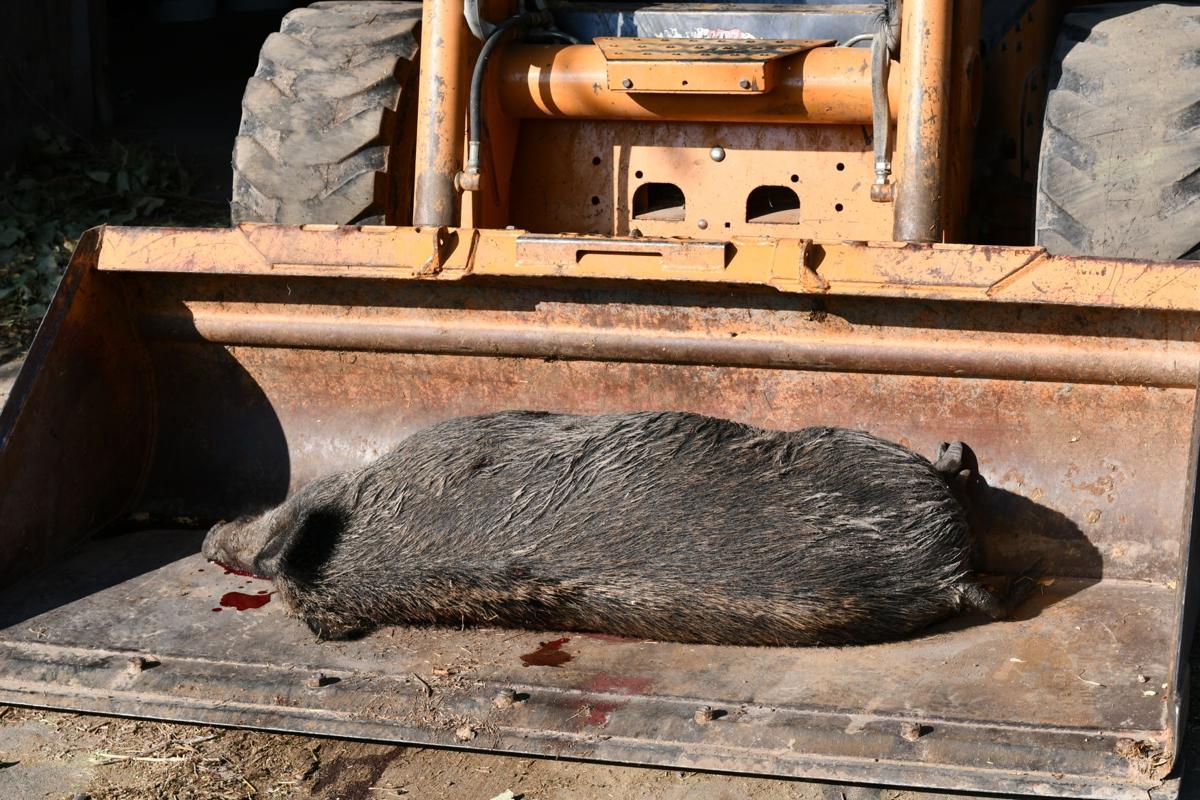 This wild hog was shot in Jefferson County, raising concerns about the exotic species taking hold in East Idaho. 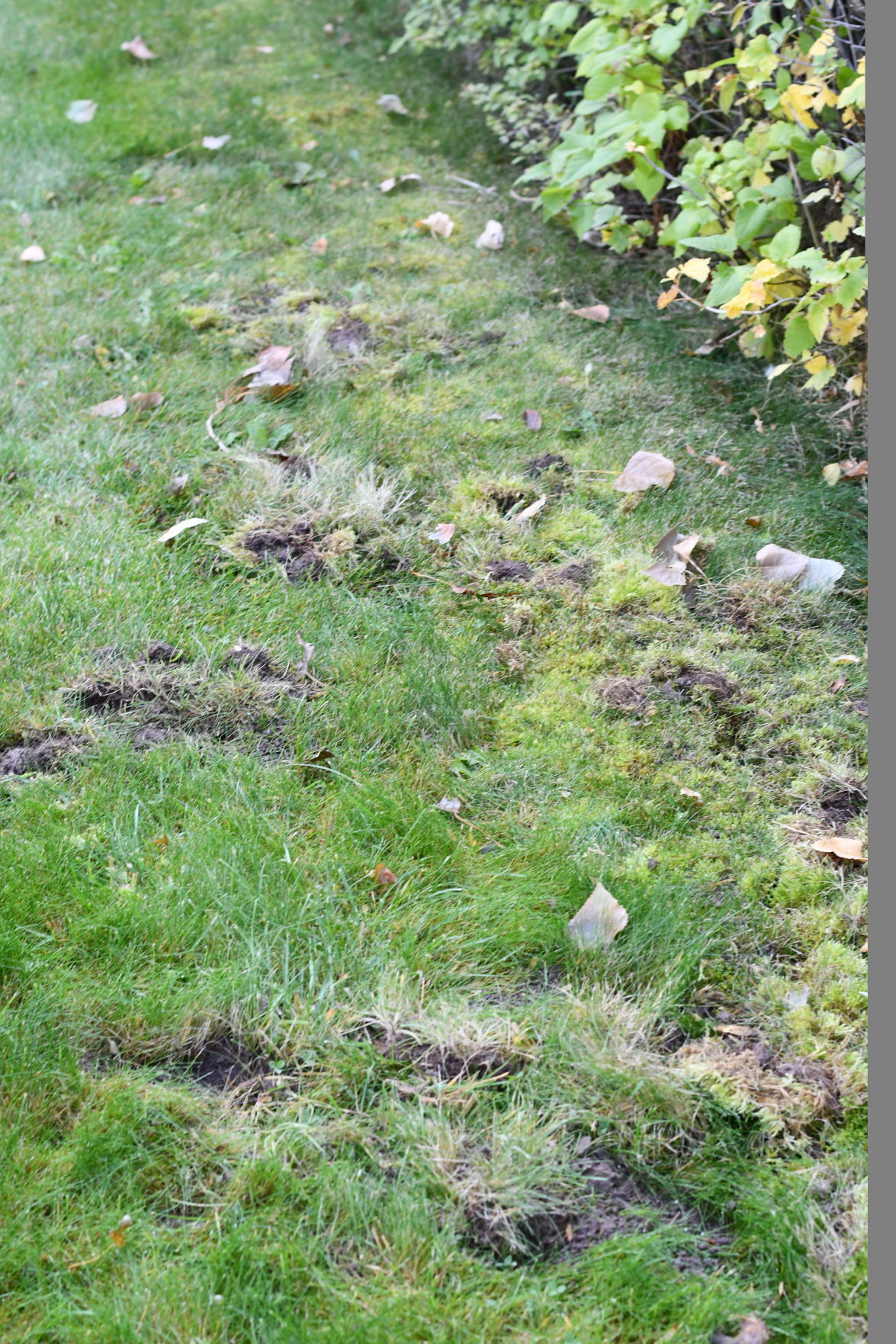 A section of grass disturbed by a feral pig at Neal Andrus’s farm on County Line Road.

This wild hog was shot in Jefferson County, raising concerns about the exotic species taking hold in East Idaho.

A section of grass disturbed by a feral pig at Neal Andrus’s farm on County Line Road.

From a distance it looked like some garbage had blown into Neal Andrus’ corral on County Line Road in Jefferson County on a recent afternoon. When Andrus went to retrieve it, he found it wasn’t garbage at all but a large, black hog sleeping in the sun.

It didn’t look like any domestic hog he’d ever seen.

“Every indication told me it was a feral hog with its long snout, short tusks and coarse hair that stood up all along its back,” Andrus said.

Andrus’ approach startled the hog, which darted past him and into an irrigation canal and across the highway that divides Bonneville and Jefferson Counties. Andrus alerted his closest neighbor that the animal was headed his way and then called the Jefferson County Sheriff’s Office, which contacted another neighbor who raises domestic hogs. All domestic hogs were accounted for.

At about dusk, the hog disappeared into some tall overgrowth along a canal and wasn’t an easy target for the deputy. When Andrus maneuvered around the hog to push it back to the deputy, it turned and charged Andrus from about 20 feet. Andrus shot and killed it.

The Jefferson County Sheriff’s Office notified the Idaho Department of Fish and Game. Jefferson County Senior Animal Control Officer Evan Smith and Idaho Fish and Game conservation officer Devin Skidmore estimated the hog weighed about 150 pounds and was a few years old. It looked like she’d had a litter at some point.

Some of the rules include legal transport which includes an import permit, a certificate of health permit issued by a veterinarian in the state and city of origin and a microchip or tattoo. Breeding animals require even stricter permits, Barton said. And more rules apply for possession including having a secure facility and record keeping. The department also has authority to issue civil penalties. Visit the department’s website for a complete list.

“The first thing we do is determine who the owner of the animal is and then interview that person to get the facts about where it came from, how long it’s been here, what breed it is and did it enter the state legally,” Barton said.

According to the USDA National Invasive Species Information Center, the animal is referred to as wild boar, wild hog, feral pig, feral hog, feral swine, old world swine, razorback, Eurasian wild boar or Russian wild boar. The animal was introduced into the United States in the 1500s from Europe as a cheap food source and either escaped from domestic farming operations or were intentionally released.

Andrus noticed a large section of his lawn was damaged, indicating the rooting nature of feral hogs. The animals can have two to three litters each year. They eat native plants, harm ecosystems, spoil water quality, eat eggs laid by ground-nesting birds, spoil livestock feed, spread at least 30 disease and 40 parasites and numerous food-borne diseases. They’re aggressive in nature and have threatened people and pets, according to the website.

Across the country, county, state and federal agencies have combined efforts to tackle the problem. Millions of dollars have been allocated to eradicate and control feral swine that are estimated to be in 32 states, mostly in the South. Its estimated feral swine can cause over $1.5 billion in damages a year in the U.S.

However, recently, feral swine have been spotted in states neighboring Idaho including Nevada, Northern Utah, Oregon and Montana.

“We don’t want them here because they’re hard on crops and hard on wildlife habitat,” Skidmore said.

“When feral hogs come into an area, they can take over. We just need to be aware,” Andrus said.

Although feral Hogs aren’t considered an invasive species, under Idaho law they are considered to be a deleterious exotic animal and must meet specific requirements in order to be imported and processed in the state, said Nic Zurfluh, manager of the department’s invasive species program.

“We don’t want the Russian wild hog here, it causes extensive damage. We do not want that species here at all,” Zurfluh said.

A campaign called; ‘Squeal on Pigs’ is an effort to prevent any feral pig species from getting a foothold in Idaho. Washington Oregon Montana and Wyoming also participate in the campaign. What Andrus did by calling local authorities is exactly what we are looking for, Zurfluh said.

“If your hunting or hiking and see something that doesn’t look like a regular domestic pig please call our hotline or your local officials,” Zurflah said. “If you see something, call someone,” Zurfluh said. “Even though feral hogs are not listed as invasive species in Idaho it doesn’t mean we aren’t concerned about them because of the damage they cause to property, the various diseases they spread and for our concern for domestic animals and wildlife.”

For more information about Idaho rules governing Deleterious Exotic animals visit the Idaho Department of Agriculture at; agri.idaho.gov/main/website or info@isda.idaho.gov.

For more information about feral hogs in general, visit the invasivespeciesinfo.gov website.