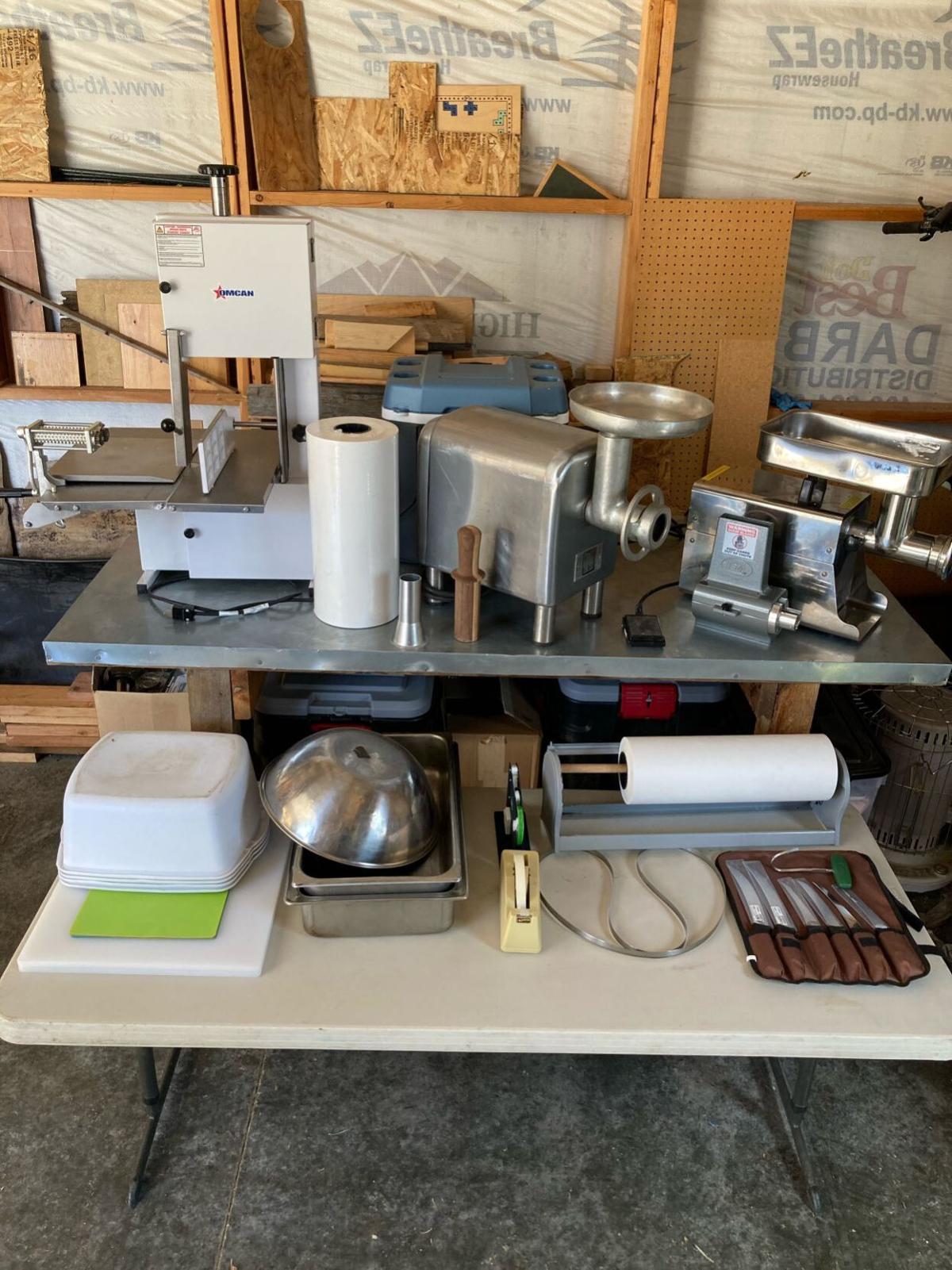 Equipment donated to help the Calvary Chapel Meat Ministry is stored at a local barn where the meat is processed. 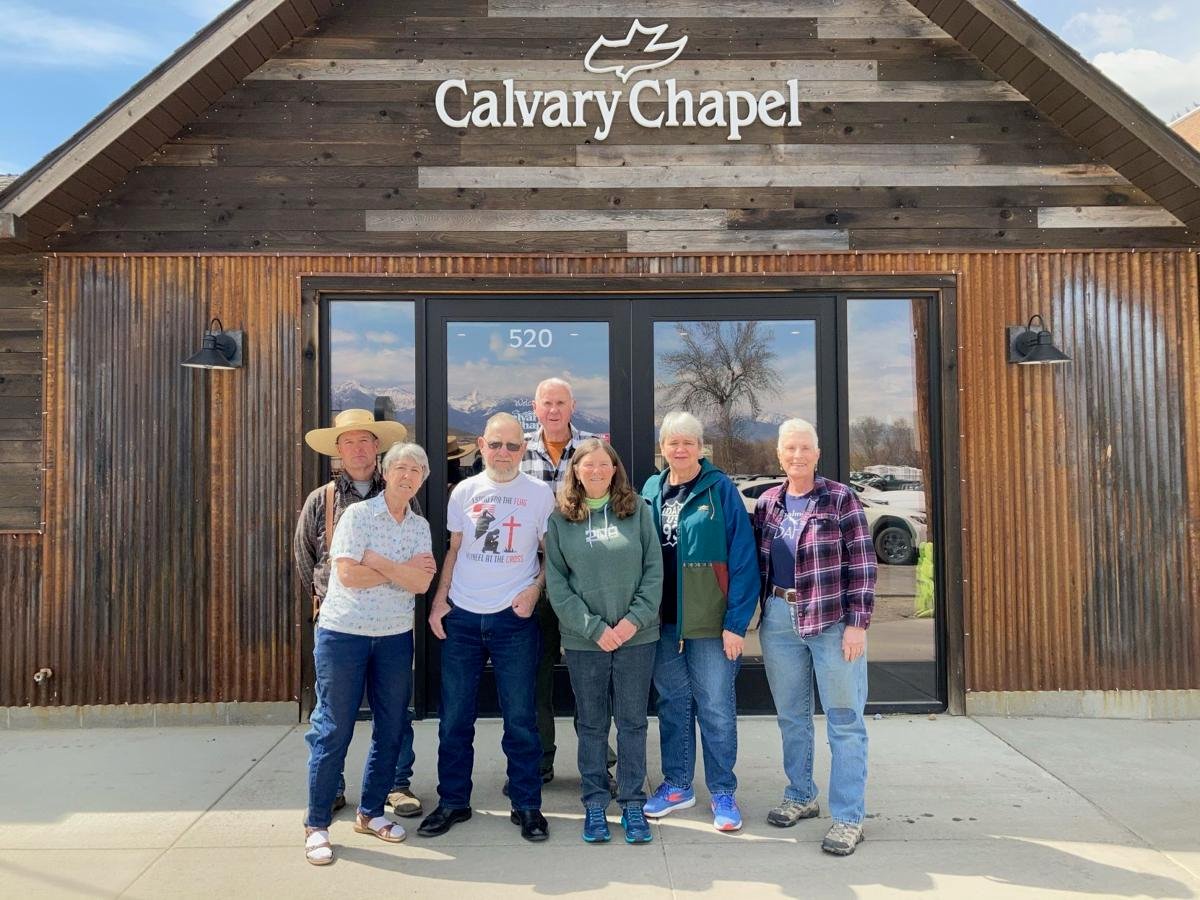 Volunteers with the Calvary Chapel Meat Ministry gather outside of their church in Salmon.

Equipment donated to help the Calvary Chapel Meat Ministry is stored at a local barn where the meat is processed.

Volunteers with the Calvary Chapel Meat Ministry gather outside of their church in Salmon.

In Salmon, ranchers, hunters, a local church and a state agency work together to make sure families in need get plenty of protein in their diets.

Hunters and other members of Calvary Chapel started their Meat Ministry about a decade ago, utilizing donated meat and cuts that would otherwise go to waste.

During the 2010 hunting season, some friends got together to help butcher each other’s game and decided to give some of the meat away to needy families. Word spread, and soon other hunters were donating meat and continued to do so every hunting season.

Then in 2013, a motorist witnessed a moose getting hit by a truck and called Fish and Game. The agency sent a conservation officer to kill the injured moose.

The conservation officer explained to the motorist that the department didn’t have money to process meat, and they would send a truck the next day to haul the carcass to the landfill.

A young woman named Kristin — a hunter affiliated with Cavalry Chapel — heard about that incident and was concerned about all the meat going to waste. She was involved with the Eastern Idaho Community Action Partnership, a nonprofit group that provides services for needy people, including a food bank.

Kristin inquired about the possibility of the food bank distributing game or fish. EICAP informed her that Fish and Game donated the occasional animal that had been poached or put down, but a family receiving the meat would have to pay for processing or do it on their own. She thought there should be a way for volunteers to do the processing and give the meat to needy families.

Kristin’s father, Larry Wade, owned Wade Surveying and had an empty warehouse room. She asked if they could process meat in there. They spoke with their pastor at the Calvary Chapel and the Meat Ministry began to take shape.

“We talked to Fish and Game, and they agreed to let us use meat from animals like that moose,” Wade said. “If a game animal got caught in a fence or hit by a car and had to be put down, they’d skin and gut it and bring it to my office. We’d hang it, butcher it and give the meat away.”

It the first year of the Meat Ministry, they gave away two moose, seven elk, and 21 deer that would have otherwise gone to the landfill.

“Fish and Game kept bringing us meat, but then the law regarding animals killed along the road was changed so that if a person accidentally hit an animal they could legally keep the meat. After that change, we were getting less meat from Fish and Game,” Wade said.

The Meat Ministry wasn’t ready to give up, however. Believing it served a critical need in the community, local ranchers began donating beef animals to keep the Meat Ministry going.

A local custom butchering business often processes those, and someone usually donates money to have it done. Ranchers who know about this program continue to donate meat, or donate an animal that gets injured and needs to be butchered.

Donations from many sources

“One lady had a beef (animal) butchered and when she picked up the hamburger there was too much to fit in her freezer. She brought us two big boxes of burger — and it all went out to needy families in one day,” Wade said.

Local families who like to hunt but don’t have enough freezer space also donate meat, and the list of volunteers for processing meat continues to grow.

Hunters sometimes shoot animals out of season and when Fish and Game has to confiscate such illegal harvests, they now take them to the custom meat processor, and the person who shot it illegally has to pay for the processing.

“The Fish and Game brings the meat to us for our Meat Ministry,” Wade said.

Hunters also bring meat. They may hear about the ministry from Fish and Game or a local meat processor.

Donations of meat come from all over Lemhi County and some from Custer County. The variety of game received includes moose, elk, bighorn sheep, antelope and deer. One year, three hunters from Florida came to Salmon and all of them got elk. They had the animals cut and wrapped, but when they learned it would be extremely costly to send meat home to Florida.

They asked the custom butcher if there was anyone in town who could use the meat and found out about the Meat Ministry. They decided to send home meat from one elk and gave the other two to the Meat Ministry, and they paid for the processing, which was still far cheaper than shipping the meat.

Wade Surveying was instrumental initially in allowing use of their warehouse as a place for volunteers to do butchering, but in later years the butchering has been done at a local ranch.

Susan Remmele was the coordinator for several years.

“This past year, our town put together a task force after COVID hit and people were losing their jobs. We tried to help out with meat. When we started running out of meat, we contacted ranchers, and seven ranchers donated cattle,” Remmele said. “The church paid for the butchering, since large cows are hard for us to handle if a rancher can’t bring them to where we do our butchering.”

The custom butcher can take his mobile unit to a remote ranch, butcher the animal, and bring it to his facility for processing, and the meat ministry gives it away.

“Hunters and ranchers have helped us, and Fish and Game has been a Godsend for our Meat Ministry,” Remmele said. “It’s been quite a while now since animals had to be taken to the landfill at the dump; now they come to us and we salvage the meat and make it available to people who are hungry.

“When we get a call from Fish and Game, we have a list of people from Calvary Chapel who want to help, and pull a team together to do it. Sometimes it’s just me and a local rancher and a meat ministry butcher,” Remmele said.

Remmele said the team was meeting to butcher an animal about three times per week for a period of 2020, often on the spur of the moment.

We’d get a call from Fish and Game about an animal hit on the highway or confiscated, and either they would deliver it to where we butcher or I’d go pick it up,” Remmele said.

People donated hoists for the barn to make it easier for Remmele and the others to hang an elk or deer.

“The whole town is behind what we’re doing,” Remmele said. “If we have a need, all we have to do is put the word out, and suddenly we have what we need and can keep operating.”

A hunter from Washington made a donation to help with butchering wild game. Donations go into a fund that helps pay for supplies and processing costs. The Cavalry Chapel congregation purchased a grinder for hamburger, and a cubing attachment for steaks. The church provides all the supplies needed for cutting and wrapping, bags for the hamburger and getting the meat packaged.

Now all they need is a cooler. Fall weather is usually cool enough to prevent spoilage, but in summer it would be nice to have a cool room — and more insulation to keep carcasses from freezing when processing them in the winter. The goal is to have a cooler enabling meat to be processed any time of year. For instance, the early bow hunting season is in August and the Meat Ministry has had to turn down donations due to the lack of refrigeration.

Processed meat is kept in a designated freezer at the church, where recipients claim their meat. This freezer for the Meat Ministry can’t be near the food bank, since the donated meat is not federally inspected.

Cavalry Chapel runs two programs — a food bank, and the Meat Ministry — which are completely separate, but with a common goal of sharing, providing food to people who need it. Meat usually goes out as fast as it comes in; there are many people in the community who don’t have much budget for food, let alone meat.

When COVID-19 hit, there was a dramatic increase in demand for the Meat Ministry’s services.

There were more people without jobs, struggling to feed their families while also keeping up with house payments, car payments and utility bills.

Last year the ministry gave away meat from seven cows donated by ranchers. One rancher donates hamburger every year. The church got a bigger freezer and one rancher has neighbors who help out with freezer space. People continually step up to help.

“This is the great thing about our community; people help each other,” Remmele said.

Much of this is done behind the scenes and quietly.

“When we get together and butcher, these are the best times of my life,” Remmele said.

She loves the camaraderie, teamwork and spirit of giving. She didn’t know anything about butchering before she moved to Salmon a few years ago.

“When we pull people together, they don’t have to be experienced. They learn as they go, with others to teach them,” she said.

If they don’t feel comfortable handling knives, they can wrap and label meat. With a good crew, a mature elk can be completely processed in about three hours. When packages are labeled they are simply dated and marked as wild game or beef, and whether it’s steaks, stew meat or burger. Each package is dated and goes out according to when it comes in; first in, first out.

Wade was involved from the beginning, but took a vacation when Remmele took over.

“Then for a while after COVID, Larry stepped in again. When the need arises, someone takes care of it, and it just keeps going!” Remmele said. “It’s been a blessing for me, to be able to serve in this way, and a blessing for people who don’t have the resources to buy meat.”

The people who volunteer time and effort are allowed to have some of the meat.

“Scripture says that you do not muzzle the ox that grinds the grain,” Wade said. “So we cut tenderloin into steaks and the people who give up several hours of their day to help butcher and process the meat get to take steaks home with them.

“I’m happy that my daughter felt this was a need, and stepped up to try to do something about it. I give her all the credit for starting this ministry and we give God all the credit for all the animals we get from the Fish and Game and from ranchers donating beef to us. This is a wonderful service for the community.”