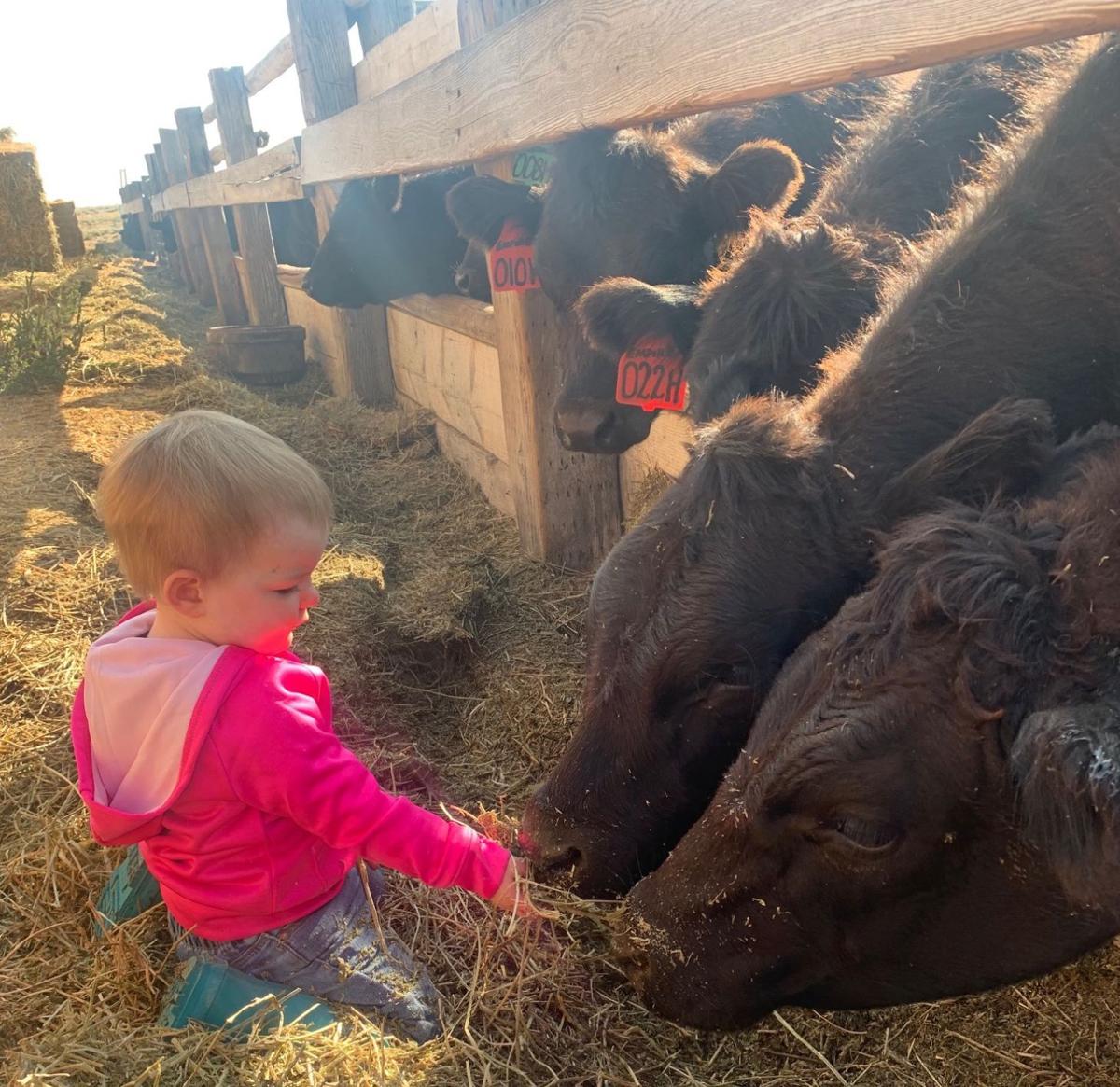 Wade and Vicki Beckman’s grandson Winston is with his herd of young bulls. 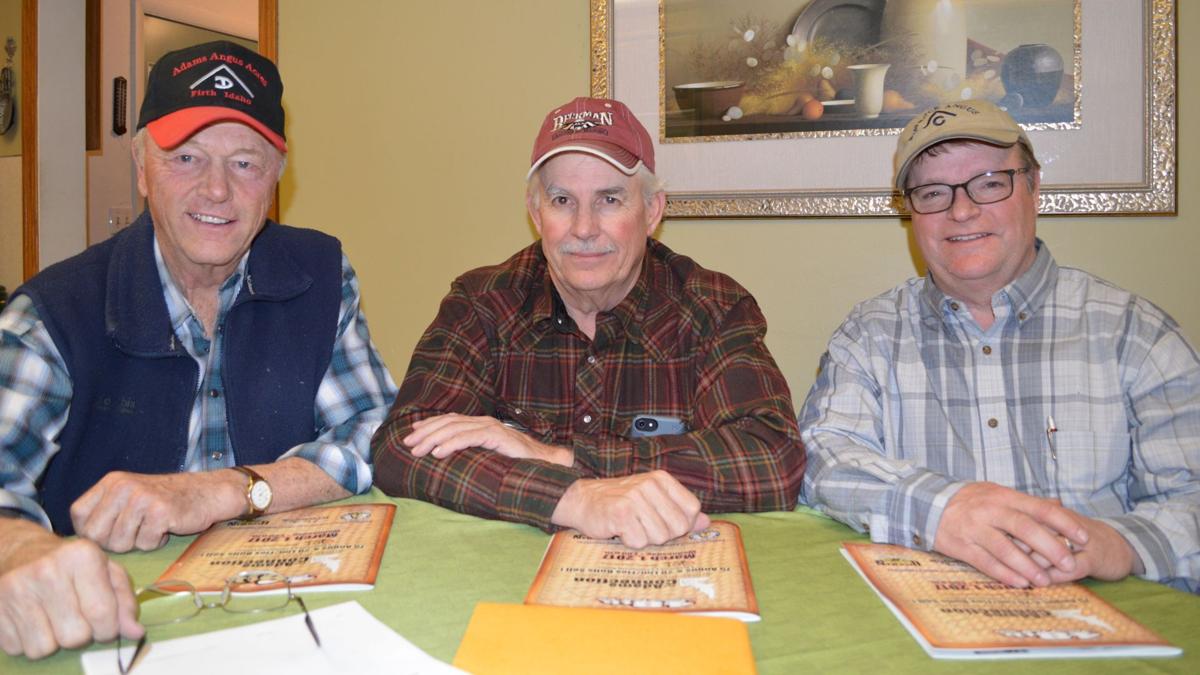 From left, Chet Adams, Wade Beckman and Arnold Callison pose for a picture. Together the ranchers and their families host the Adams Connection Snake River Genetics Bull Sale each March in Blackfoot. In Idaho Falls on the last Saturday in October they'll hold their second annual all female sale at the new Bonneville County Fairgrounds on St Clair Road, south of Idaho Falls. 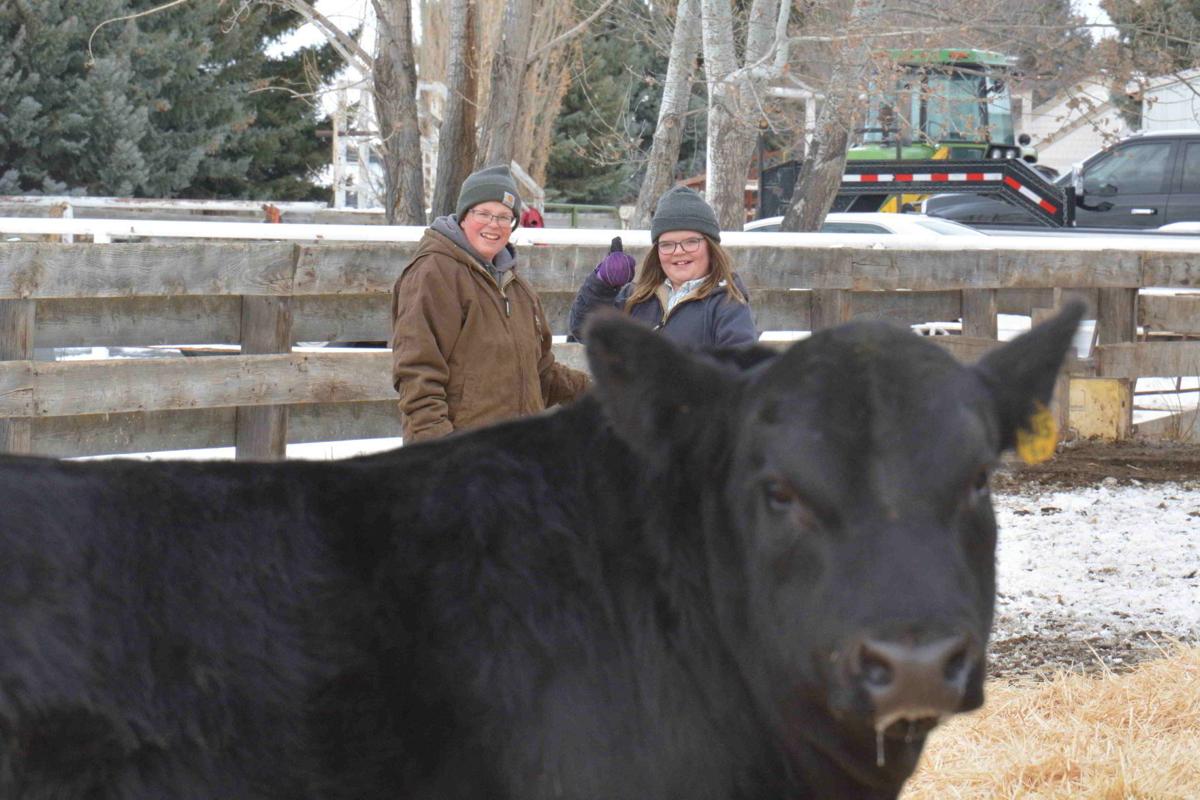 Conner Hansen, 12, and Angie Hansen, 13, grandchildren of Arnold and Teresa Callison, help with sale bulls on Dec. 20. They also have 18 registered bred cattle of their own, which they purchased with their own money. 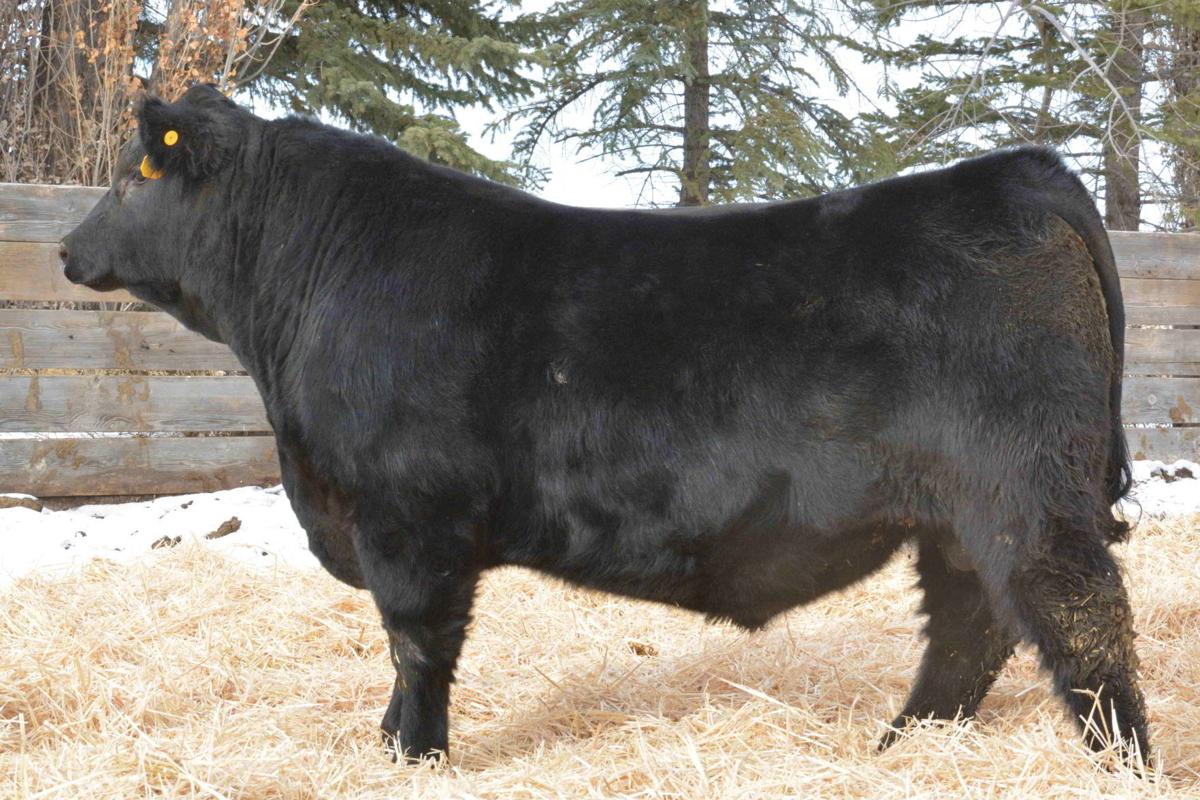 Pictured above, Rimrock Absolute is a powerful herd bull candidate. 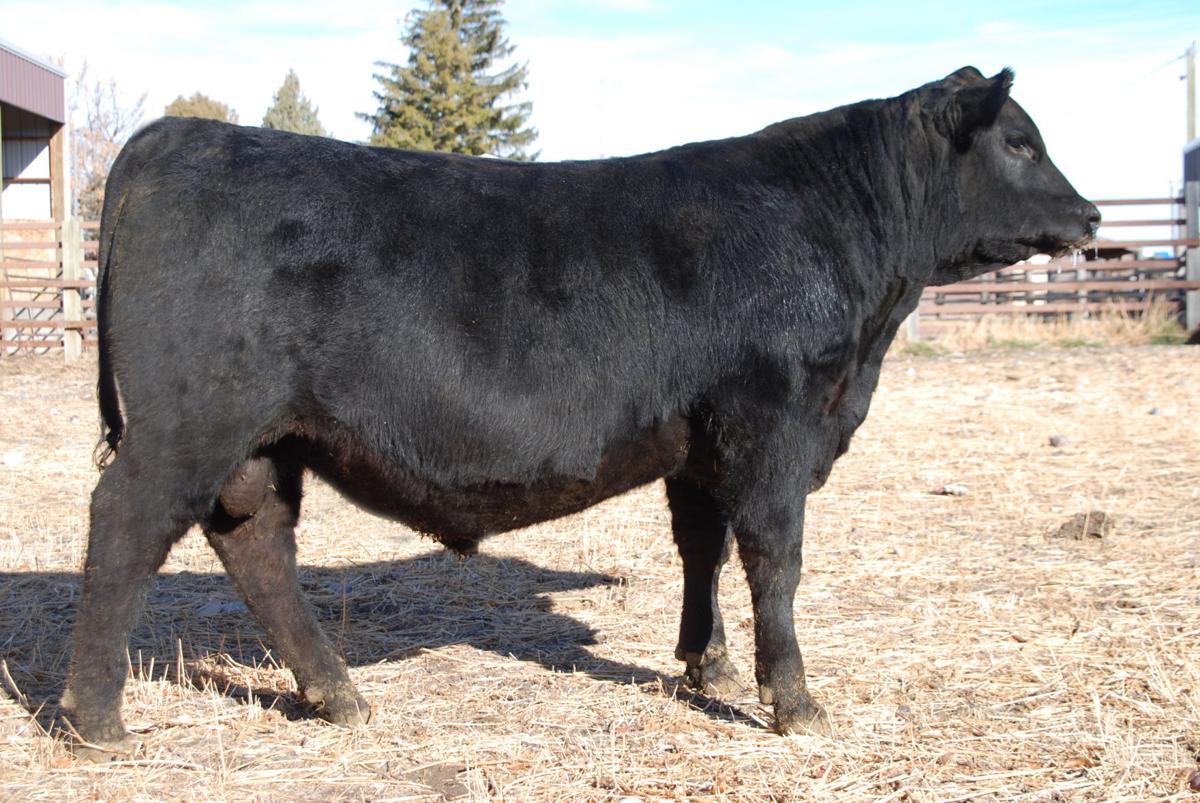 Adams Acres Remarkable is a bull that will be sold at the annual March auction in Blackfoot.

Wade and Vicki Beckman’s grandson Winston is with his herd of young bulls.

From left, Chet Adams, Wade Beckman and Arnold Callison pose for a picture. Together the ranchers and their families host the Adams Connection Snake River Genetics Bull Sale each March in Blackfoot. In Idaho Falls on the last Saturday in October they'll hold their second annual all female sale at the new Bonneville County Fairgrounds on St Clair Road, south of Idaho Falls.

Conner Hansen, 12, and Angie Hansen, 13, grandchildren of Arnold and Teresa Callison, help with sale bulls on Dec. 20. They also have 18 registered bred cattle of their own, which they purchased with their own money.

Pictured above, Rimrock Absolute is a powerful herd bull candidate.

Adams Acres Remarkable is a bull that will be sold at the annual March auction in Blackfoot.

The first sale was held in 1969 by Bob and Opal Adams in Leadore. Their son Chet and his wife Phyllis joined the sale in the mid-1970s. After the untimely death from a drowning accident of the elder Adams, Chet and Phyllis carried on the tradition and moved the sale to Blackfoot, near their Firth-area ranch.

In the years since, Chet and Phyllis labored to improve each year’s sale. Their commitment to integrity and raising top quality cattle became their main focus. Sadly, Phyllis passed away last year after a long battle with Alzheimer’s.

“She was an integral part of the ranch and sale. Ours was a team effort. Her unwavering contribution and partnership is greatly missed,” Chet said.

Eight years ago, the Arnold and Teresa Callison family of Rimrock Angus in Blackfoot and the Wade and Vicki Beckman family of Beckman Livestock in Roberts joined the Adams Connection Snake River Genetics Bull Sale.

The 2021 sale will be Wednesday March 3, beginning at 1 p.m., at the Blackfoot Livestock Auction Company at 93 Rich Lane. Producers can also bid online at LiveAuctionsTV. The sale attracts producers from around Idaho and surrounding states. Seventy-six Black Angus Bulls and 22 Lim-Flex Bulls will be sold. Lim-Flex bulls are a cross between a Limousin and a Red or Black Angus.

The 2021 sale will be held at the new Bonneville County Fairgrounds at 1542 East 73rd South in Idaho Falls on Saturday October 30th.

“Our first female fall sale was a success. Cattle sold into seven states as well as locally,” Adams said.

Each animal has behind him or her years of genetic improvement, which is proved out with DNA, ultrasound and performance testing, Adams said.

“Technology has really changed the whole schematics of breeding and is another tool to help us. We put a lot of emphasis on performance and balanced expected progeny differences (EPD), including strong maternal values. As we continue to forge the genetic link, our goal is to breed sound cattle with a lot of capacity, length, good feet and udders,” Adams said, and Beckman added, “And with the access we have to artificial insemination, it’s unlimited in what genetics we can try, and we do.”

Altogether the families represent about 150 years of experience in the seed stock livestock business. Each grew up on ranches, were in 4-H, FFA and Junior Angus shows.

“We were all born and raised on ranches. We all work closely together and have the same philosophies of raising quality seed stock. They are all really good people to work with,” Chet Adams said, and Arnold Callison added, “We like cattle, and it’s a bad addiction that we can’t get out of.”

The secret to their success is improved genetics which helps to improve the herds of the commercial cattle producer, along with an emphasis on personal integrity.

“If a buyer has a problem with one of our bulls, we fix it. We take care of our customers,” Adams said.

For more than 30 years, Adams was a teacher and administrator in schools in Firth, Alaska and Shelley. Along the way, he and Phyllis purchased neighboring ranches, expanding their land holdings and cow herd in East Idaho.

“We lived on my principal’s salary, and put all the profit we made from the ranch back into it. It’s something we enjoyed. We had a goal and we went after it,” Adams said.

Callison worked on the Pat Goggins family's Vermillion Ranch in Billings for several years before returning to lease Adam’s ranch while the Adams’ were in Alaska. Today, he’s the vice president and a loan officer at the Bank of Commerce in Blackfoot.

“The Pat Goggins family's Vermillion Ranch is the largest Angus operation in the world and they’re great people,” Callison said. “We’re still friends, and I picked up auctioneering from them too.”

Each year, Callison volunteers his auctioneering talents to about 10 4-H and FFA auctions and about 25-35 community fundraisers like the annual Christmas Tree Fantasy in Blackfoot.

“The opportunity to lease Chet’s place gave us a chance to come back here where Teresa and I are from. We’ve always stayed close and have worked together quite a bit,” he said. “And auctioneering has been really fun, I really enjoy it.”

Their children are activity involved in the cattle operation. Tiffany and Jered Hansen are in charge of marketing, Darrell and Jenny Callison help with the cattle, and have their own herd called Western Skies Angus. Mark and Charissa Callison are the computer experts, Callison said.

“Our kids and grandkids have never been to Disneyland or Disney World, but they have been to every livestock show there is,” Callison said. “Our grandkids Angie and Conner are very active in the operation and our newest granddaughters’, twins Maisy and Elaina will have the same opportunity.”

The Beckmans have raised both commercial and registered cattle in the Roberts area and also raise cattle for 4-H and FFA exhibitors. In 1979 the Beckman’s purchased their first Limousin bull and were so impressed they found themselves in the purebred industry, Wade said. In 2000, they incorporated Lim-Flex cattle into their operation.

“The hybrid advantage is huge. These genetics have helped us to create the ultimate beef machine, the feeders and packers love them,” Beckman said. “This is something we take a lot of pride in. We’re not high-end guys who don’t know which end of the cow the hay goes in.”

Wade currently serves on the board of the North American Limousin Foundation and his wife Vicki Beckman manages the day-to-day cattle operation along with their son Sedar. Sedar and his wife

Danna Beckman along with daughter Winston are partners in the operation. Sedar and Danna have degrees in Sustainable Agriculture from the University of Wyoming in Laramie, WY. Danna Beckman is the manager of the DL Evans Bank in Rigby.

Their daughter Devori has a master’s degree in breeding and genetics from Colorado State University. She’s a co-manager of a Walmart store in Nebraska. She’s married to Dr. Matt Spangler, a professor of Animal Science and Beef Genetics Extension Specialist at the University of Nebraska in Lincoln, NE., and along with their son Jack, contribute the latest genetic research to the ranch operation.

Chet and Phyllis don’t have an heir to take over the family business. Their youngest son who was the most interested in ranching died in a plane crash in 2000. Their daughter, Lisa Adams lives in Boise and another son, Eric Adams, is a doctor of chiropractic medicine in Idaho Falls.

“I love this business. I always have. I’m not ready to quit yet,” Chet Adams said, and Callison added, “Wade and I are increasing our herds so that when Chet cuts down we can pick up a bit.”

All three families look forward to the annual auction.

“One of our favorite days of the year is sale day,” Callison said. “If I could work as hard as my wife Teresa, I could run two ranches on the side. It’s enjoyable to be surrounded by family and visit with old friends, and we serve the best lunch and cookies in the land.”