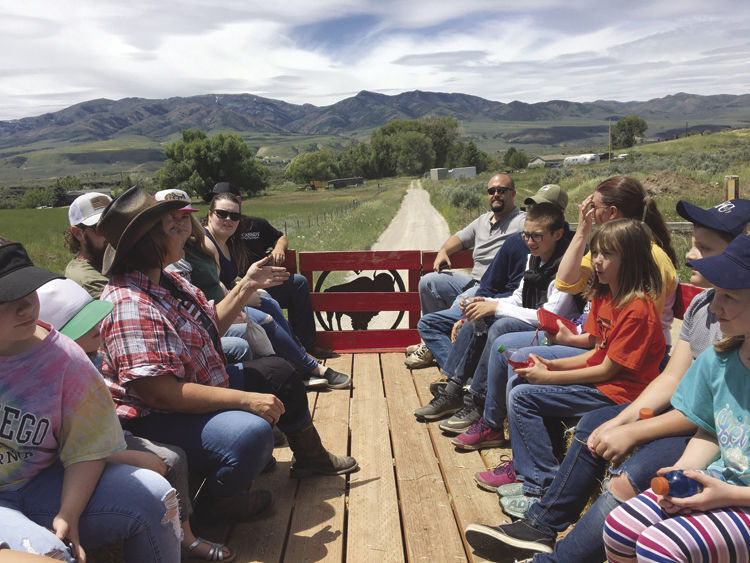 A rider on a recent wagon tour at Diamond P GrassRoots Bison Ranch near McCammon feeds one of the ranch’s bison. 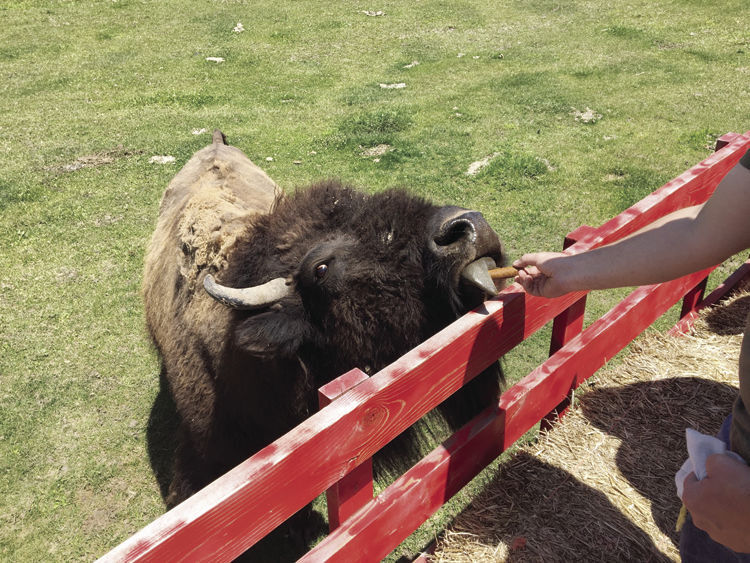 Jenny Perkins, at left with her hand extended, provides information to people on a paid wagon tour of the Perkins’ bison ranch near McCammon. 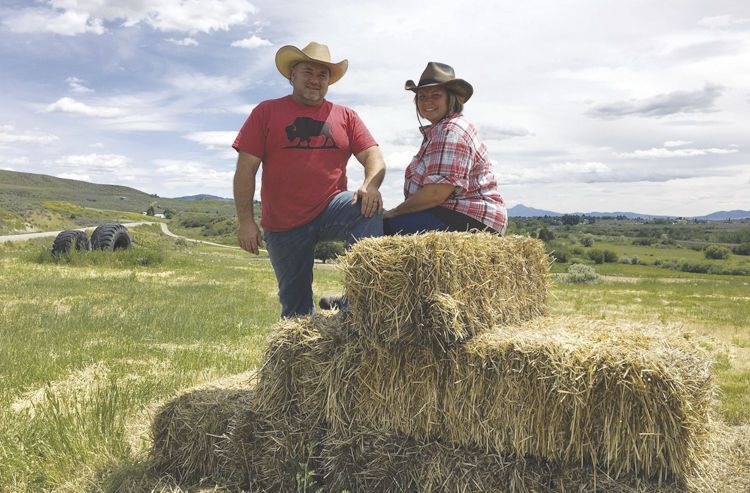 Rob and Jenny Perkins pose for a photo on hay bales at their bison ranch near McCammon. The couple provide paid tours of the ranch and its animals.

A rider on a recent wagon tour at Diamond P GrassRoots Bison Ranch near McCammon feeds one of the ranch’s bison.

Jenny Perkins, at left with her hand extended, provides information to people on a paid wagon tour of the Perkins’ bison ranch near McCammon.

Rob and Jenny Perkins pose for a photo on hay bales at their bison ranch near McCammon. The couple provide paid tours of the ranch and its animals.

McCAMMON — Raising an iconic native animal on their local livestock ranch is starting to pay dividends for Rob and Jenny Perkins.

In addition to generating a revenue stream from their bison meat, visitors are willing to pay for an experience at Diamond P GrassRoots Bison Ranch.

They’ve been raising bison since 2013. Last year, however, they started offering paid bison-viewing wagon rides through their pasture. The trips proved to be popular.

Jenny narrates and oversees the trips for visitors. She says it’s rewarding.

“I really love being able share what I love about the animals with other people in hopes they will love them, too,” Jenny said.

At one time, the North American bison was hunted almost to extinction. But now the combined wild and domesticated population sits at about 530,000 animals.

And this year for the first time the couple’s guided tours — which are $5 per person for adults and free for kids ages 2 and under — are actually starting to turn a bit of a profit, said Rob.

Originally, they planned to just offer the wagon rides on Saturdays. But they were so popular they ended up doing them all week long.

Rides, which generally draw more than a dozen people, are typically provided in June. And the baby bison generally arrive in May and June. They generally draw the public’s attention.

“They love to see the babies,” Jenny said.

The couple’s last public wagon ride for this year was Saturday. But they will still accept large private groups for the rides until it snows, she said.

Rob, who works as a dentist for his full-time job, said the original idea they had years ago was that there seemed to be a lot of people who believed they could pet bison, which isn’t safe.

When they feel the need, bison can go from a dead stop to running over 30 mph in an instant.

“So the educational purposes was our original goal,” Rob said.

Meanwhile, one of the highlights of the rides happens when Jenny introduces visitors to their star bison, Trooper.

Trooper’s mom died when he was born and Jenny had to bottle feed him for six months to keep him alive.

“We just had him right up here by the house because I had to feed him every couple of hours,” she said.

So he got acclimated to people, and he’s the best known bison at the ranch. He’s been in the the paper once and on TV once, she said.

He’s a little smaller than the other bison and has always felt more comfortable with people than other bison, Jenny said.

In fact, when Jenny first left him in the pasture with the other bison he would cry, she said.

But recently that has been changing.

“Now that Trooper is 2 years old he’s starting to figure out that he’s a bull,” she said.

And that will be all to the good.

“It will be kind of nice to see him be a little more assertive,” Jenny said. “Right now he does kind of get pushed around a little.”

Further, other members of their bison herd have been shown twice in the opening segment of the TV series “Yellowstone,” with Kevin Costner, Jenny said. And once the animals appeared in one of the show’s hour-long episodes.

During rides, the wagon, which can carry a maximum of about 22 people, starts out from their rural home at 5801 S. Old Highway 91.

Rob says it’s fun to provide information about what he calls a fascinating animal.

And in addition to the bison, their home site offers scenic views of a wide area.

Jenny says she really enjoys the chance to take people on the wagon rides and acquaint them with bison.

And the couple take pains to separate American bison from the Cape and Water buffalo from Africa.

On one recent wagon ride that carried 22 people, Jenny told the visitors about the history of bison, why there’s a distinction between American buffalo and Cape buffalo and introduced visitors to bison up close and in person.

Of course, everyone was warned beforehand not to pet the buffalo.

But visitors were given tubular feed sticks to give to the bison that came up to the side of the wagon. And as the visitors fed them they noted that the animals have long tongues.

It was an interesting ride according to 38-year-old Logan Carson of Pocatello, who brought his wife and three children on the wagon ride.

“I was just amazed how big they are and how much personality they have. Really I mean each one seems to have its different traits,” he said. “I was pretty amazed at that and you know just the uniqueness of them — they’re not cattle, they’re not horses, they’re just something very, very ... different.”

Carson added that it was fun feeding them.

“Those tongues were incredible,” Carson said. “It’s like an 18-inch purple octopus. It was pretty neat.”

“My littlest one she was a bit apprehensive. She wasn’t 100% sure what to think of those,” Carson said. “But my boys, yeah they were all about them.”